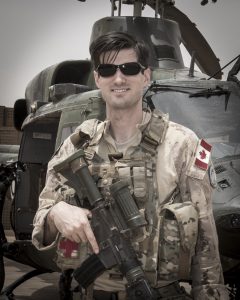 My name is Captain Antoine Labranche and I am a tactical aviation pilot currently assigned to 430e Escadron de tactique d’hélicoptères (ETAH) in Valcartier. My hometown is Stanbridge East in the Eastern Townships of Quebec, but I definitely consider Montreal as my primary hub.

Prior to embarking on the long path to becoming a pilot, I served as an infantry officer in the army reserve with Le Régiment de Maisonneuve while undertaking my undergraduate studies at Concordia University as part of the Regular Officer Training Program. This proved to be a fantastic experience where I learned numerous skills, developed various pillars of my leadership, and acquired practical knowledge of the CAF institution.

Following a component transfer to the Royal Canadian Air Force (RCAF) in 2008, I was posted to 438 Squadron to begin various phases of pilot training. I earned my RCAF pilot wings in 2013 and was re-posted to 438 ETAH as a first line pilot. In the following years I upgraded to Aircraft Captain (AC) and completed numerous courses such as the Tactical Electronic Warfare Instructor Course and the Advanced Tactical Aviation Course. I also took part in various exercises such as MAPLE FLAG and MAPLE RESOLVE as well as Operations NEVUS and SABOT.

Last year I deployed to Iraq as part of Operation IMPACT. The scenery of the former Mesopotamia was phenomenal and the flying experience was incredible. I am currently deployed in Africa on Operation PRESENCE, which is Canada’s commitment to the United Nations Multidimensional Integrated Stabilization Mission in Mali (MINUSMA). As the Battle Captain and Deputy Operations Officer, I manage daily operations for our five CH-146 Griffon and three CH-147F Chinook helicopters over two lines of operations: forward aerial evacuation and utility aviation. These are critical enablers that allow freedom of manoeuvre for UN security forces operating in remote and vulnerable areas of Mali.

This is no easy task. Both the austere environment as well as the size and scale of the area of operations requires creative thinking. To put things in perspective, Mali is three times the size of France. As such, time and space analysis are critical for the safe execution of all missions, especially those involved with saving lives. So far, we have conducted over 70 deliberate operations in this theatre and completed 10 MEDEVACs, which helped save the lives of more than 40 MINUSMA soldiers and civilians.

The College has been a critical pillar in my academic development, enabling me to execute my duties in Mali with greater confidence. I completed my graduate studies at RMCC just a few months prior to my current deployment. The War Studies Programme offered an excellent academic opportunity for those interested in acquiring a strong grasp in theories of war and strategy, the psychology of warfare, and the evolution of conflicts throughout time. Certain courses, such as Intelligence Studies, enlightened me with the importance of integrating intelligence services into daily operations.

Furthermore, writing a thesis on the acquisition of the CH-146 Griffon and the evolution of tactical aviation gave me with the knowledge of air power employment as a key asset to achieve tangible effects during conflicts. I therefore consider the College key to improving operational effectiveness in various operations and in this theatre. 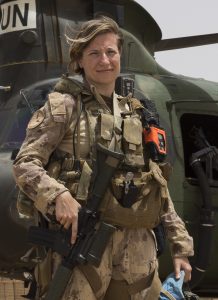 I’m Major Marie-Andrée Lavoie and am originally from the small town of Amos (pop. 15,000), Quebec.

I joined the Canadian Armed Forces in 2011 and am currently the Task Force Surgeon and Canadian Medical Emergency Response Team (CMERT) leader for Operation PRESENCE-Mali.

This is an exceptional mission as forward aeromedical evacuation is brand new for the CAF and my team and I feel very blessed to be part of it. This capability is the insurance policy for UN security forces operating in remote and vulnerable areas of Mali and we’re proud to be enabling the country’s peace and stability.

Our medical team is composed of four members: an acute care physician, a critical care nurse officer and two medical technicians. We also rely on force protection members to not only ensure our safety but assist in the provision of advanced combat first-aid. These infantry members integrate into our team so well that they now help us examine patients and assist in specialized techniques such as ultrasounds. It’s truly amazing to see what this team has achieved: we’re talking about flying an emergency room to a point of injury, even in areas that pose a direct threat to us! When I decided to become a doctor, I never thought this would be something I would do and it’s been an amazing experience.

Another aspect I especially enjoy is sharing ideas and experiences with our UN partners. We’ve worked closely with contingents from Belgium, the Netherlands, Germany and France and this is an invaluable opportunity to enhance our collective knowledge, procedures and techniques.

In the future, I would love to continue serving on operations at home and abroad so I can strengthen my skills and help educate future CAF medical personnel. Our trade is changing quite a lot and there are so many opportunities for RMCC alumni to consider a second career with our growing team.

While I did not attend the College, I supported its students and staff as a medical officer and acting Base Surgeon from 2012-2016. During my time in Kingston, I found it very impressive to see the Officer Cadets grow as military leaders and Canadian citizens. I’ve come to admire all that the College offers this new generation of young leaders and I encourage them to stay true to its motto: truth, duty, valour.

It’s crucial to keep these values at the forefront of your mind, especially on operations. There may be times when you question your purpose, but as soldiers, we have a duty to service. Whether it’s working in an austere environment, overcoming the taxing nature of a mission, or staying resilient in the face of the traumas to which we may be exposed, push forward no matter what.