Caption: Looking over the marching orders – The Nijmegen members are being given the map route for their ‘march for the day’ by the team Capt. 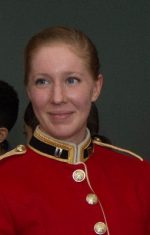 The RMCC contingent for this year’s CF participation in the 4 days Nijmegen march is finally only two weeks away from departure for the Netherlands, and the anticipation is palpable.

Having successfully passed CF back-to-back 40km marching test and continuing to surpass the mileage standard at over 550km, the team is preparing in full mode for their 11 day journey overseas.

Now that the heavier marches are completed, we’ve settled down into maintenance of pace and rhythm by keeping up shorter marches to retain our endurance and muscles, along with our workouts during the week.

This week we had two 17km marches around the city and up Hwy 16, with a 26km march in between, where we visited a legion on the way to Amherstview!

Having yoga sessions and PT plan services provided by the excellent PSP staff at the KMCSC has been one of the greatest resources the team could have had, and has been even more important lately to keep out fitness high and ensure we are safe from injuries.

This last week we’ve been hearing more about Nijmegen, getting kit lists and schedules, going through the processes required to all DAG Green to go, and it’s more exciting now that it’s getting so close.

To have the opportunity to take part in such a large military function with forces from across our country and so many others will be quite an experience.  Most of us wouldn’t have this opportunity until later in our careers, provided we are sent on future deployments.

So this summer will greatly benefit the perspectives and attitudes that we students on the team will be bringing to our fourth and final year at RMC.

Rookie Prof. quickly adapting to life on the peninsula