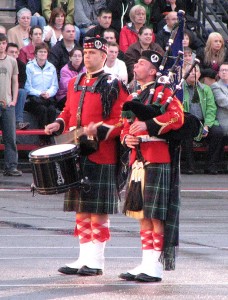 From this site you will be able to find a way to get into touch with your old pipe band comrades, learn about the current RMC P&D and how you may be able to support them, get you back piping or drumming, or provide a forum to share your piping/drumming experiences. The RMC Club hosts this site via their web server. 1. The first Royal Military College of Canada Pipes and Drums performance was:

2. Who was the first cadet to hold the position of Cadet Wing Band Officer at RMC?

3. During the first trip to West Point to help cheer on the hockey team in 1959:

a) the band was so well received that the West Point Cadets forced them out onto the ice to play between periods, and again that night at the dance.

b) the band was so poorly received that an exhaustive training program was established in order to “create” the pipers needed.

c) Sgt. Paquin, an experienced piper and drummer, was added to the RMC drill staff.

4. Who took about 20 volunteers from the recruit class and started work on the chanter practice in the Trophy Room. 5805 Bill Evans (RMC 1963) recounts that it was the smartest thing they could have done because they avoided the 6am morning parade all winter.

5. Before this time, the P&Ds uniform was no different than the rest of the Wing: scarlet tunic with RMC pants, gators and pillbox.

6. The RMC Pipes and Drums began wearing which Tartan?

a) Mackenzie Tartan, which is a military tartan based on the Black Watch tartan.

b) Province of Ontario Tartan, which is made up of four main different blocks containing the colours red and white with three shades of green and two shades of blue.

c) the Maple leaf tartan, which incorporates the green of the leaves’ summer foliage, the gold which appears in early autumn, the red which appears with the coming of the first frost, and the brown tones of the fallen leaves.

7. The RMC Pipes and Drums played at the 53rd annual Grey Cup Game in 1965, which was held in Exhibition Stadium in Toronto. Who were the Grey Cup champions in 1965?

8. Thanks to the efforts of 2364 Air Commodore Leonard Birchall, then RMC Commandant and H8829 Col. The Hon. George F.G. Stanley, then RMC Dean, the RMC pipes and drums were equipped for the first time with:

a) most of their highland kit, including the tartan

9. The funding for the feather bonnet came as a result of becoming a fully recognized band by Canadian Forces Head Quarters in:

11. When RMC Pipes and Drums played on Parliament Hill in 1979, a single piper succeeded in accidentally drowning out:

a) a performance of the Kingston Symphony Orchestra.

b) an introduction by the Deputy Minister of National Defence.

13. The Pipes and Drums were requested to play the Air Canada Silver Broom International Curling Championships held in:

14. Which Commandant, at the time, joined in playing the pipes when the Band performed at the US Air Force Academy in Colorado Springs and at USMA in West Point?

15. The Pipes and Drums performed during which ceremony in 1988 for the XV Olympic Winter Games held in Calgary, Alberta

16. The Pipes and Drums performed at RMC in 1987 at an informal social gathering known as a _____ in which traditional entertainment includes song, storytelling, music and dance.

17. The RMC Pipes and Drums played at the 76th annual Grey Cup Game in 1988, which was held in Frank Claire Stadium, Lansdown Park in Ottawa. Who were the Grey Cup champions in 1988?

a) Winnipeg Blue Bombers b) BC Lions 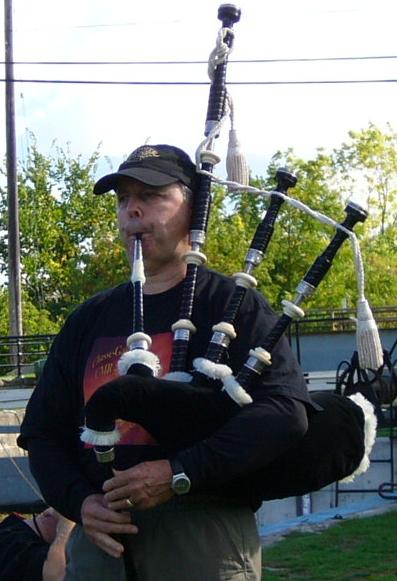 3. a) the band was so well received that the West Point Cadets forced them out onto the ice to play between periods, and again that night at the dance.

8. a) most of their highland kit. They began wearing the Mackenzie tartan but continued to wear the pillbox. The feather bonnet came in 1970.

11. a) a performance of the Kingston Symphony Orchestra

15. a) The P&Ds performed at the Olympic torch lighting ceremony. The theme was Share the Flame