RMC: remembering 6 Dec 1989: massacre of 14 women at the Ecole Polytechnique

“I don’t know if you remember from last year, but I’m the one organizing the College’s annual remembrance displays for the 6 Dec massacre of women at the Ecole Polytechnique. What we are doing this year are stories of people who remember that day – members of the military and faculty and staff.

Our very own Steve Lukits was an editor at the Whig during that period, and he forwarded to me a powerful editorial he had inserted into the paper the next morning. My partner on this project, LCol Art Jordan, and I would like to reprint it in e-Veritas, and Steve has given us his permission to do this.”

Steve Lukits was a rookie editorial writer at The Kingston Whig-Standard in December 1989.

Writing for a living was his daily job for 13 years at the ‘Whig’, where he was an editorial writer, executive and editorial page editor, and from 1999-2002, the paper’s editor-in-chief.

The RMC Associate Professor, from the English Department staff came to the journalist’s job after earning PhD and Master’s degrees in English at Queen’s University.  He taught part-time there, as well as at the University of Manitoba.

Them! They did it! Hear the rage and follow the accusing stare and the pointing finger to the others, those who are not like me, but different in some threatening way. They hurt me! They scare me! And when the words, glaring eyes and muscles lunge in brutal violence, there is the promise of relief. Now I’ll get them!

Maybe Marc felt something like this when he walked into the engineering building at the Universite de Montreal, pulled out his automatic rifle and killed 14 women. For Marc, they were woman, those he separated from the men in the classroom before he started shooting. Then, devastated by madding hate, or blindness, or guilt, or exaltation, or self-loathing, or whatever he felt after killing the women, he killed himself.

They were also “a bunch of feminists,” as Marc had screamed at the women. In the three-page letter found on his body, he wrote that “feminists have always spoiled my life.” Now his enemy had a recognized, different shape and a name.

But “feminist” names not a person, but a group, the “them” Marc hated so much that he killed and shot as many he could. In other times and other places, hated groups have had other names: blacks, Jews, Catholics, Communists, Japs, Arabs, Ibos, Iranians, French, English. Scratch any culture or nation and find its targets for hatred, those who are can be seen as different and somehow a threat to the PLU, the “people like us.” For there always has to be an “us” to war against “them.”

And before we begin to distance the killing in Montreal by setting up the “madman woman-hater” and “feminists” as the warriors, maybe each of us should consider our personal contribution as a guilty party to these battles. How many times, when wronged by lawyers, cops, bureaucrats, politicians, have each of us cursed them as a group and so forgot the individual women or men in the group who have not offended us. Only small, but crucial gaps between hatred, anger and violent action separates these little outrages of everyday life from the murderous outrage in Montreal.

We must resist the easy urge to transform individual women and men into faceless groups, into names of derision, into objects of hate.

And we must begin this resistance not by only watching and reading about the Montreal killings, seemingly removed from the horror. The potential for that horror is in each of us.

If we refuse this private pause of inward reflection and only look outward to the terrible event, we may develop immunity to the hatred and violence we witness in the world around us. We must try to reach out and touch people. Or we risk turning the victims of our hatred, as human beings have done so many times before in our sad history, into them, the saddest of biodegradable garbage.
***
Where were you? RMC’s Commemoration of the 6 December Massacre focusses on memories from its own community 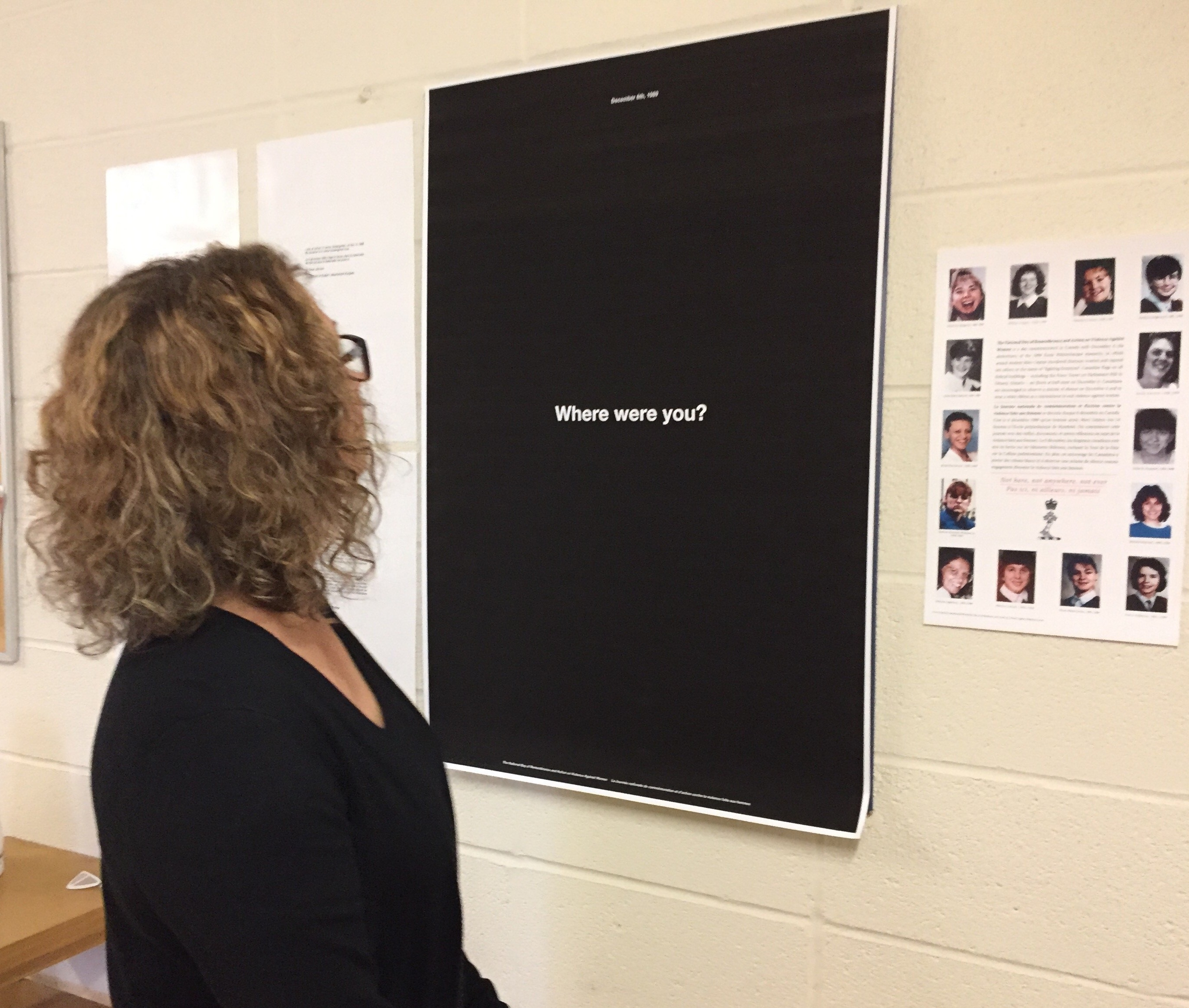 Kelly Lupton, RMC’s Deputy Manager PSP, experienced something new on RMC campus the other day: she had a conversation with a stranger about a series of posters that have appeared around the peninsula. “Who talks about a poster?” Lupton mused, but from the Messes to the Library, and the classrooms and corridors in between, people are talking and reading.

The black, bilingual posters, which ask the viewer “Where were you? Où étiez-vous ?” is the newest RMC installation to commemorate the 6 December, 1989 massacre of 14 female students at Montreal’s École Polytechnique.

LCol Art Jordan and I, co-coordinators of the annual installation, began the project back in September, when we asked members across the RMC community to contribute their own memories of that terrible day. Those memories, which soon appeared in long rows next to the questions, are now visible across campus, allowing students, staff, and faculty to read the experiences of their colleagues and friends as they move through their own university space.

Sharing these stories collapses the temporal as well as emotional distance between then and now, and doesn’t allow us to think of the event as separate from our own experience. This year the Cadet and the Senior Staff Messes will again host empty tables. Massey Library has a portrait gallery.

Chief Librarian Sarah Toomey describes the mobile installation on Massey’s main floor: personal statements of “where we were, what we felt, what we thought” provide sombre complement to “the portraits of the fourteen women, their young faces adding the only colour to the stark contrast of black and white.”

As people look at the portraits, read the names, consider their own colleagues’ memories, and share their thoughts, we move, in Toomey’s words, “from betrayal to disgust…to resolve.” RMC remembers.

Ex cadets and current cadets making a mark on many fronts