“Over 150 years of history brought to the 21st century”

This past Thursday, the Royal Military College of Canada held its annual Sunset Ceremony. The evening event allows the Cadets to demonstrate a number of drill sequences and military routines and also serves as the ceremonial end to the year at the College. The crowd was filled with hundreds of family members and friends as well as Canada’s Minister of National Defence, Harjit Sajjan.

The ceremony started at 19h00 with the Aboriginal Leadership Opportunity Year (ALOY) Cadets carrying out a traditional drum display on the parade square. 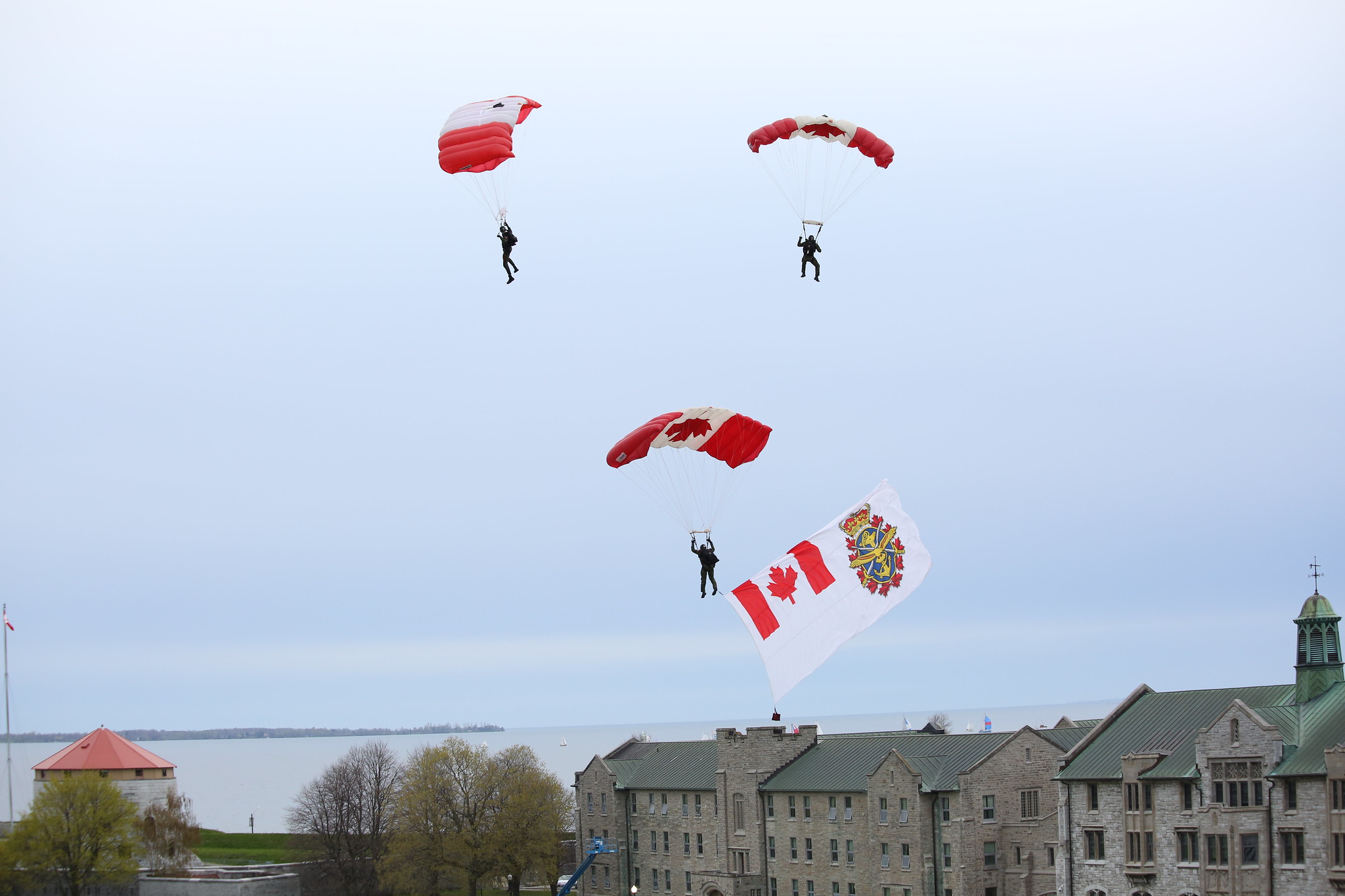 A display from the Canadian Forces’ Parachute Team, the Skyhawks, was next. In groups of three and four, they dropped onto the rugby field behind the parade square. As they fell towards the ground, they carried out numerous acrobatic maneuvers and towed the Canadian, RMC, and CF flags as they buzzed the crowd. Their performance was complete with a flyover by two C-130 Hercules.

Following the Skyhawks, the RMC Band, choir, and highland dancing group performed a number of demonstrations including a drumline and a traditional highland dance.

After them, the RMC Drill Team took the stage and performed a full 10-minute drill sequence in complete silence. Whether it be them performing simultaneous  Feu-de-Joie’s, marching in odd yet elegant fashions, or throwing their rifles between each other, the crowd was taken away by their performance.

Next, the Old Eighteen and Naval Gun Crew went onto the parade square and performed a simulated infantry advance complete with old .303 rifles and the firing of the two naval guns. The mix of old British drill in a modern military environment added a nice touch of history to the evening.

The Honour Guard then marched on and completed a Feu-de-Joie and bayonet movement on the march. They then halted, performed three more Feu-de-Joie’s to the sound of the national anthem, and presented their weapons.

While the Honour Guard stood on guard, the two Colour Parties performed a ceremonial changing of the colours. The group then marched in front of the MND and Canadian Flag. 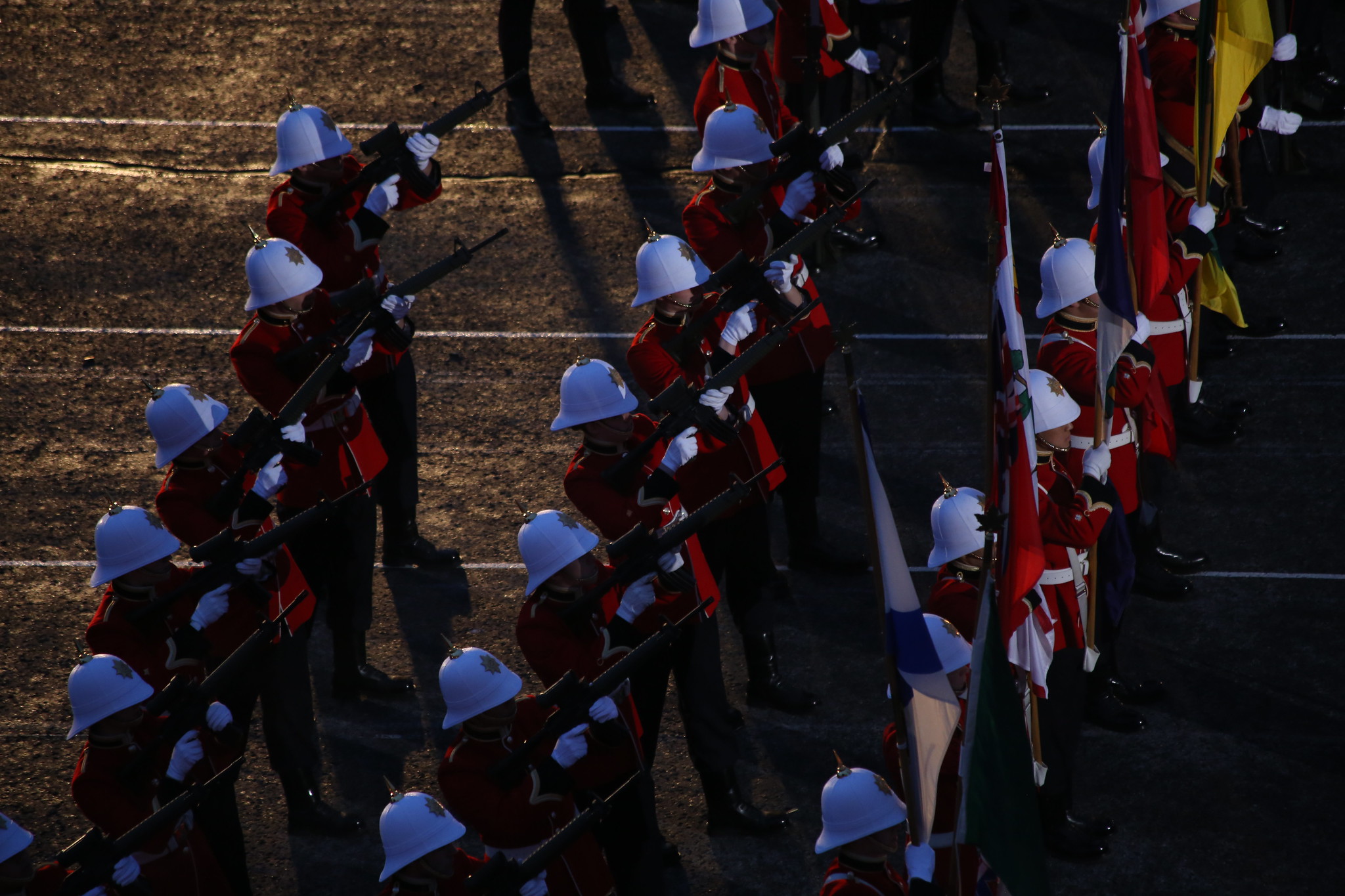 At the going down of the sun, the parade performed the ceremonial “Beating the Retreat” as over 150 years of history was brought to the 21st Century. At the final lowering of the Canadian Flag, fireworks began shooting up, marking the end of the Ceremony.

The contingent and naval guns marched off as bystanders watched the myriad of colourful explosions light up the Kingston sky. 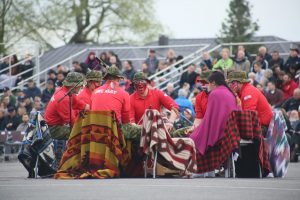 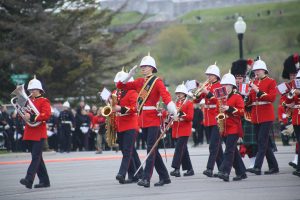 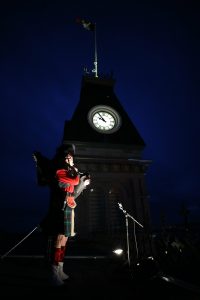 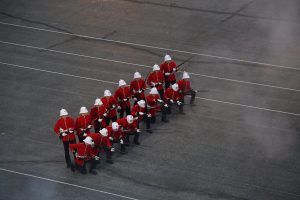 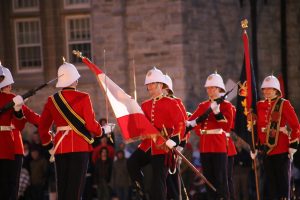 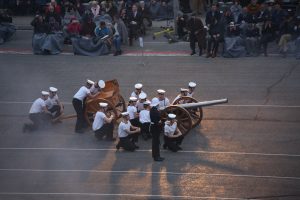 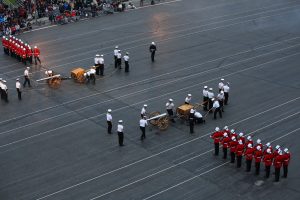 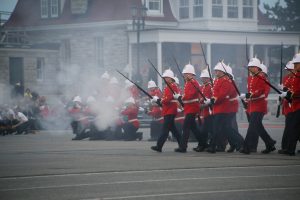 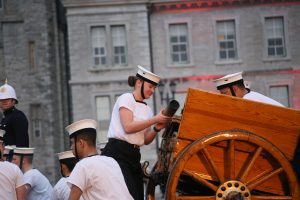 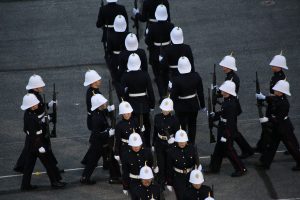 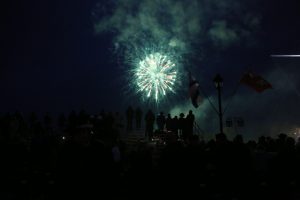 This past week, I had the opportunity to participate in RMC’s annual Sunset Ceremony as a part of the Honour Guard. Seeing as I was at CMR Saint-Jean last year, this was not only a unique experience, but an activity that immersed me into one of the many new traditions RMC Kingston has.

During the ~2 weeks of “Drill Fest”, we worked on the ins-and-outs of the drill routine and learned to be comfortable again drilling with the C7 rifle. The evenings were often long and wet, but that didn’t change the reality of the Sunset Ceremony: we had to put on a show.

For members of the Honour Guard, we focused on performing drill movements on the slow march, as well as perfecting our Feu-de-Joie’s. The Old 18 learned the specifics of old-fashioned British drill and the proper way to advance as an infantry unit supported by two naval guns.

The Drill Team had began their practices a few months earlier but took part in the Ceremony like everyone else. The entirety of the sequence was carried on in silence and focused on the unconventional style of drill that is set aside for more elegant ceremonies.

RMC’s band, highland dancing group, choir, and ALOY Cadets spent countless hours of practice throughout the year to perfect their performance skills so that they were perfect for the evening.

Overall, the experience I had was not only unique, but fun. While drill is often seen as the bane of every soldier’s existence (with the exception of a handful of seasoned Sergeant Majors), the past few weeks felt more like a project than a parade.

Being able to go from someone who had little to no idea what the Sunset Ceremony was and become proficient with the Honour Guard’s complex sequence was gratifying. I’m looking forward to being a member of the team again next year.

2019 Grad Ball A Chance to Celebrate with Family and Friends