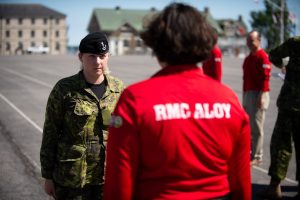 culture. They have been welcomed by RMC’s command team and the Cadet Wing with open arms. The program has a new Cadet barlsate this year, which includes ALOY alumni, NCdt Kelsey Barry. When asked about her experience working with ALOY she said, “I love being staff! I’m glad I can give back to the program and experience it from the other side. Orientation Period is going really well so far. We even celebrated a Cadet’s birthday.” The ALOY cadets are getting well acquainted with the College life so far and complete Orientation Period this Friday when they have their badging parade.

ALOY also welcomes a new staff member to the team. Dr. Paul Chaput, Metis from the Red River, is the new ALOY Academic Advisor and is taking over the position from Maj (ret’d) Michael Boire. Dr. Chaput has a wide range of experience in Indigenous knowledge and culture gathered from the co-production of 39 episodes of Finding Our Talk: A Journey Through Aboriginal Languages which focused on the 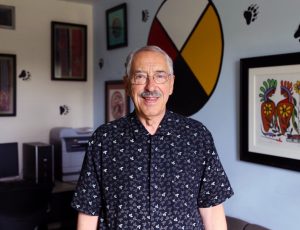 efforts of Indigenous communities across Canada to save their languages and cultures. He also created two films for Nishnawbe Aski Legal Services on the integration of Restorative Justice circles in northern Indigenous communities. He is very considerate of the wealth of Indigenous knowledge that has been transmitted over thousands of years despite the past aggressive cultural assimilation policies of colonial governments. Dr. Chaput was drawn to the program upon hearing of the success of its candidates and their post- ALOY achievements. He is inspired by the vision of ALOY graduates becoming strong leaders both within the military and in their communities of origin. While advising ALOY candidates on academics, he will also be teaching the course PSE120: Indigenous Peoples and the Military. Through readings, film, and discussion, Dr. Chaput will invite his students to dialogue about the issues at the heart of Indigenous and Western worldviews. Using his background in communication technology, he looks forward to introducing media arts into the course as a means of transmitting and receiving knowledge. Having grown up on military bases in Canada, Dr. Chaput is very happy to be working with ALOY students on RMC’s beautiful and historic campus.