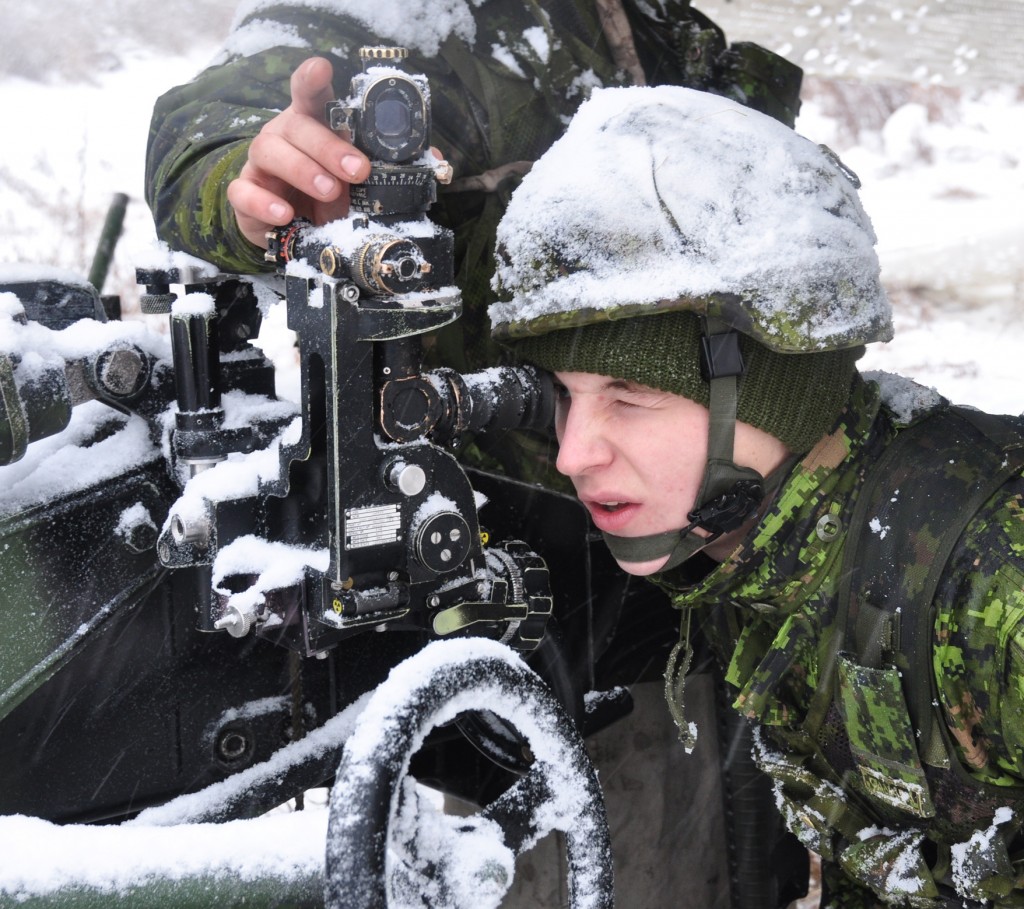 The last weekend of November, the aspiring artillery officers of the Royal Military College (RMC) Saint-Jean and one of their squadron commanders, Captain Jessy Brunet, traveled to CFB Valcartier, Quebec, to take part in a confirmation exercise being performed by 5 RALC, the resident artillery regiment.

This was a great opportunity for the young officer cadets of RMC Saint-Jean as it gave them an in-depth look at what an artillery officer in the Canadian Forces really does. The group arrived on base the evening of 26 November. They were given a brief tour of the base before gearing up and heading for the exercise area. After encountering some minor mechanical difficulties and learning how to properly assemble a 10-man tent, the group arrived at Romeo Battery. They were introduced to the command staff took part in the night’s roving patrol.

The next morning the group received a tour of the battery and a brief explanation of what was involved in setting up a battery position and how the guns were positioned in reference to their target. They then moved on to the local reserve unit’s battery position and got to see each position on the gun crew. After seeing how the shells were fired, the group packed up and drove to the Observation Point (OP) to see how they impacted. There they learned a bit more about the math involved in having a shell impact on a target several kilometres away. They also got to witness some shells impact, from a safe distance of course. Following this experience, the group headed to the exercise command position (CP) where they quickly set up camp before heading out again, this time to a radar position to learn about target acquisition. On the way back to the CP, the group made a pit-stop by a shooting range to watch one of the local infantry reserve unit train with the C-6 machine gun. Sunday morning, the group woke up for breakfast with the Commandant of the regiment and a brief tour of the CP before heading back to base to get cleaned up for the ride home. On the way back to base, the officer cadets and their captain made a quick stop at the logistics camp for the exercise and got a look at the support effort necessary to feed the troops and keep the gun batteries up and running.

At the end of the weekend, everyone had fun and learned a good deal about their future profession. The officer cadets had quite the experience in Valcartier and are the better for it. Their profession is no longer just a description on a recruiting pamphlet; they truly have an idea of what they could be doing once they receive their commission. One thing is for sure, none of these officer cadets will be forgetting their experience with 5 RALC anytime soon.