There was a prayer – a prayer is not allowed anymore at the colleges probably – but the prayer went something like, “Rub-a-dub-dub, Thanks for the grub, Yay God”. 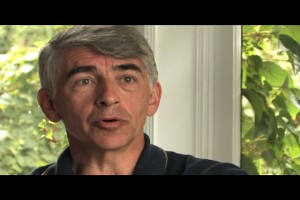 Don Lovell is currently the Development Services Manager within the Ministry of Labour and Citizens’ Services for the province of British Columbia. He also serves as the president of the Vancouver Island Ex-Cadet Club, is a member of the Royal Roads University Military Heritage Committee and organizes the annual Remembrance Day ceremonies at Royal Roads. This interview was recorded at Homecoming 2007 on the occasion of his class’ 35th reunion from Royal Roads.

Karen – Don, what was your experience of recruitment and coming to Royal Roads?

Don – Well, my dream of going to the military college started when I was 9 years old, and my parents took me to Fort Henry in Kingston. I was watching these very disciplined young men drilling in scarlets and looked down and saw this other place and I was told that that was the military college. And they had scarlet uniforms, and I figured they were the same and so I wanted to join up and be a Fort Henry guardsman like those guys. I didn’t find out until later that there was no direct connection. So I applied in high school with two other buddies and we were both accepted. They made the mistake of going to RMC and they missed out on going to a place that had a castle. But I got accepted in March and got a telegram, and the telegram said, “based on passing your final exams”, and I checked that out with the recruiting center, and that was the case, so I didn’t have to study for the rest of the year, and that was pretty significant, because you had provincial exams and other things I think, and I was in like Flint. I joined the militia when I was 17 and I was ready to have a military college experience that would be just like the movies.

Karen – So did Royal Roads match up to your expectations?

Don – It matched up and exceeded in every dimension. I got a wonderful roommate that had no idea what he was getting in for. And roommates were very important, and it became my mission in life to make sure that he enjoyed his experience. He’s at the reunion this weekend, and we’ve remained really good friends. The military college put you in with people that have so many different abilities and talents that it wasn’t like everyone’s cut from the same cloth, and you found out over the years that instead of becoming some type of cookie-cutter, you actually expanded in your interests.

Karen – What do you recall about daily life at Royal Roads? 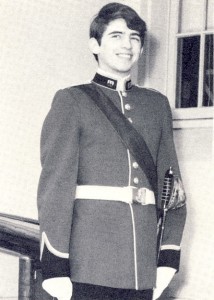 Don – Well, the daily routine for first year started at ten minutes after six with wakey wakey wakey. The castle commissionaire was located in the castle – they kept the title Hall Porter for a while and I think they converted in to castle commissionaire – he would blow on a bosun’s whistle “Wakey, wakey, wakey, rise and shine, you’ve had your time, comb your locks and put on your socks”, and he had variations of that, but some of them are too impolite to put on the tape. That was the beginning of the day. You took your gash can – your garbage can – you slammed it on the floor outside the door, indicating you were now conscious, and you hustled through getting your bed made, which you either slept in or you didn’t sleep in. If you didn’t sleep in it was faster to get it made in the morning.

You shaved – quickly. You put your shirt on – the shirt was buttoned up already with the tie around the neck so you just had the top two buttons loose, threw on the pants and suspenders, battle dress jacket, belt, boots – remembering you put your socks on, or you slept with them on. And then you were out the door in less than 20 minutes with your books and stuff to go have your breakfast. And that was the beginning of the day. Except if you happened to be Joe Artibise (10197) and you were running circles [laughs]. But actually, a lot of us were running circles. And a circle was a third of a mile that you would run as a punishment. You could get anywhere from two to five. The cadet wing commander could award five. Those punishments now have been banned by the Charter of Rights and Freedoms, so it gives an indication that the rules were somewhat more severe. They were found in a book called Cadet Wing Instructions. That was your life. Your whole room was assembled by those instructions, every drawer was laid out according to those instructions except for one drawer which you could have polishing cloth. Underneath that polishing cloth you could keep private items.

My roommate received a private item one time. It was a box containing an angel food cake. I was the only one in the flight who knew that he had the angel food cake, but he would not share it with me. He kept it in the box, underneath that, in that one drawer underneath his polishing cloth. But I didn’t divulge the contents to anyone else in the flight. That made me a friend for life, you see. But everything you did was regulated. You ran to your classes, everywhere you went you ran. And you saluted everything that either moved or looked like it should be saluted. And you did your breakfast if you had it. If not, you were on circle parade in which time you didn’t have breakfast because you were cleaning up your gear after circle parade so you could get ready for classes. And you started in on your classes which went until ten o’clock when you had a ‘kye’ break – the juniors met in one area and the seniors in another and you got some hot chocolate and I think toast.

Anyway, back to classes ‘til noon. Now noon might be lunch, except if you were given a circle because you did something wrong in the morning circle parade, so then you’d miss your lunch. You had to go to lunch for the announcements. You had to stay there until announcements were given. There was a prayer – a prayer is not allowed anymore at the colleges probably – but the prayer went something like, “Rub-a-dub-dub, Thanks for the grub, Yay God”. But that was given and then announcements then you could leave to go on circle parade or if you didn’t have any circles you could eat lunch. And then that was followed by classes in the afternoon until around 4:30 when you broke to go back to your room, change and go for sports. And then sports lasted until whenever they did and then you went for supper.

Then you went back to your room, and you were hunkered down in your room for compulsory study time until ten at night. And at ten at night there was one hour in which you had time to press, polish, do your toiletries, get ready, because lights out at eleven meant that the lights went out and you were in bed and you could now sleep until ten after six. Except really you didn’t because you got up early to finish the homework you didn’t get done, write a letter home, finish a cigarette, or polish or press something that wasn’t done, or clean the coal dust out of your room because the rooms were inspected in the morning and the college was fueled by a coal furnace which always blew in the window because the windows had to be left 6 inches open during the day. And that went on and on, forever it seemed, until Christmas I think when most of us got to go home. That was sort of the routine. I think I remember it, too!

Karen – You mentioned that you have maintained contact with a lot of the people. What do you think it was about Royal Roads that promoted that feeling, that relationship?

Don – The reason why the young men, and later, young women that went through military colleges created such lasting and bonding friendships was you had to rely on each other to succeed. You couldn’t do it alone, whether it was starting at the obstacle course, and going through facing things that you might be personally apprehensive about. It was the team and your colleagues that pulled you through. And sometimes that might be your desire not to let them down. Sometimes it was they physically carried you and sometimes you might even help someone else that might be struggling in a particular obstacle.

That extended through your studies, your sports, and into the military program. And the strengths and weaknesses that you as an individual had, those strengths would be augmented by others and your weaknesses would be brought up to a minimum or even to higher level. And as far as friends for life, you got to know your roommate and your colleagues so well that, you could tell who they were when you saw them in uniform, walking away from you backwards, you could tell from just the way they walked, who they were. And should one of them happen to streak a sports dinner, with only a balaclava on, you might know that was your roommate. Because we knew each other in that close a way.

And, because of that, you tend to come together every few years, you only have to say a few words, or even just a glance and you have that intimate camaraderie that slices through years of not being able to be together. And the sharing of common circumstances that are on the extreme level of hardship and sleep deprivation and food deprivation, all those things, it brings you together in a way that no other system can. And you couple it with this majestic setting of a castle and gardens, the beauty and the environment, if you wanted some quiet, the trees, the peacocks, and even the fish in the pond. You ended up with this idyllic setting. These things that were imbued into us, they formed a culture and character that lasts a lifetime.

For more information about military heritage initiatives at Royal Roads University, or to contribute to the projects, contact Karen Inkster, Alumni and Heritage Projects: Karen.Inkster@royalroads.ca.

Help to Preserve the History of Royal Roads

My name is Karen Inkster, and I have been a staff person at Royal Roads University for the past 4 ½ years. As an ongoing initiative to preserve the military heritage of Royal Roads I am submitting articles and requesting feedback from the ex-cadet community through e-Veritas. This week I am sharing an interview that I conducted with Don Lovell, and in it he mentions a couple of things that I am hoping to get more information about. So, if you get a chance, please help me by leaving comments here explaining some of the following, or by emailing me at Karen.Inkster@royalroads.ca :

KYE – What was it? How was it made? What are its origins? Was it served at the other military colleges? How long did the tradition of drinking kye last? Do you have any anecdotes or recollections related to drinking kye in the gunroom? Did it taste good?

HALL PORTER / CASTLE COMMISSIONAIRE – Other than wakey, wakey, what did the Hall Porter do? Did this position last throughout the duration of the college? Was this a military position? Any further anecdotes?