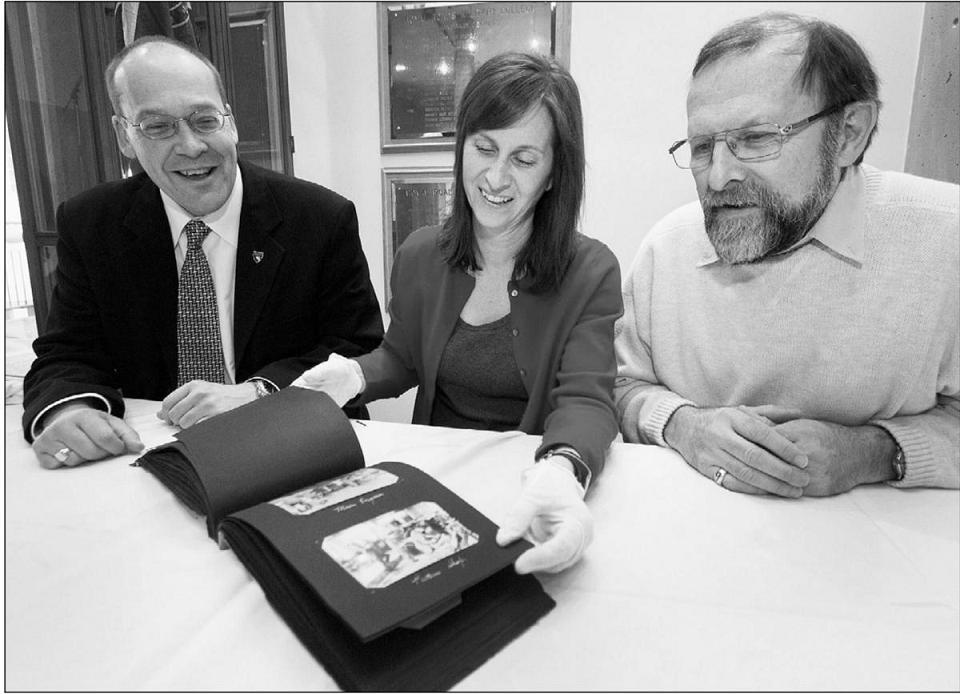 History is a two-way street for Royal Roads University and the Naval & Military Museum at CFB Esquimalt.

Given Royal Roads’ military past, officials at the two sites have established a co-operative spirit when it comes to recognizing their shared traditions. That was in evidence last September when a ship’s bell that once hung in front of the university’s Hatley Castle was returned to the Colwood campus from the museum, where it ended up after Royal Roads ceased to be a military college in 1995.

Now Royal Roads has handed over to the museum a 1920s-era photo album that highlights Esquimalt Harbour, the naval fleet and other period features.

“It’s all part of trying to restore the past,” said 9318 Dave Bindernagel, president of the Ex Cadets Club and the commandant of Royal Roads Military College when it was closed by the federal government.

“This is a valuable collection of photos from [former navy commander] Gerald Beament, whose dad actually attended the Naval College of Canada in Esquimalt at the dockyard.”

Thomas Beament, the photographer, graduated from the college in 1921, and his son donated the photo album to Royal Roads in 1985. The building that housed the college is still standing and was renovated a few years ago.

Gerald Beament said from his home in Ottawa that his father was in the last class to go through the Esquimalt school, which was the precursor to the military college at Royal Roads.

He said he has his own copies of the photos in the album, and is happy that the originals are being well looked after.

Bindernagel said the museum has the expertise to ensure that the pictures are properly preserved.

“The photos capture a lot what life was like back in the teens and 20s, and I think it’s nice to have them at the museum because these things, after a while, will just fade away and they’d be gone.

“It’s nice, after all this time, for the album to actually go back to the base where it really belongs. It’s a nice connection for Royal Roads University to give it back to the museum.”

Paul Longtin of the Royal Roads Foundation said it is a case of the university and museum working together with a common goal of honouring the past.

Museum curator Debbie Towell said the old photos will require some care, especially since the paper in the album is acidic. “As the paper begins to break down it breaks down the photos as well, so when people have these old photo albums at home they really should take the photos out and put acid-free tissue between the photos and the paper.”

She said the photos will also be digitized.

Students from Royal Roads University have put their learning into practice and turned a mere $67 into $28,930 for charity.

The Bachelor of Commerce students were taking part in Royal Roads’ 12th annual Venture Challenge, in which teams start with an investment of $1 per member then try to make as much money as possible in five weeks. The idea is to come up with a profit-making plan and turn over all proceeds to a chosen charitable group.

The top-earning team held a “yoga-thon” and hosted a choral event to raise a total of $8,260 for B.C. Children’s Hospital. The donation was made in the name of Molly Campbell, the Victoria baby who was diagnosed with leukemia in December and has inspired considerable community support. Molly is being treated at the hospital.