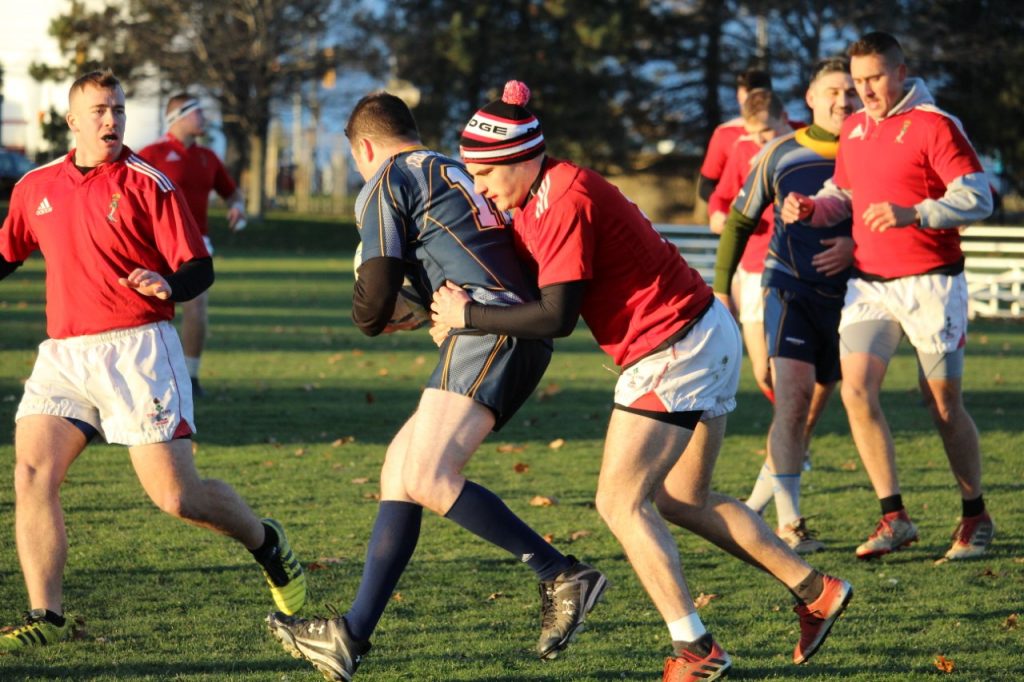 RMC rugby closed out their regular season in October but an exhibition game against the Canadian Forces College Chambrays provided for some friendly competition as well as a positive networking opportunity for the Paladins—even at sub-zero temperatures.

On the scoreboard, RMC’s youth and fitness provided the edge they needed to pull away in the match, scoring 10 tries to CFC’s four tries. The Paladins 2018 all-star fullback Glenn Butler led RMC with a pair of tries, while former RMC rugger Maj Keith Woodill scored two tries for the Chambrays. More than just another exhibition game, this match provided the Paladins with a chance to meet a few senior officers in a more relaxed setting, as future leaders in the CAF went up against today’s leaders.

Another ex-cadet and former Paladins rugby player continued his philanthropic trend of donating to the Foundation and rugby program to help make this game happen. A big thank you to Scott Treadwell, who graduated from RMC in 1995 and served nine years in the RCN. He is now the Vice President, Capital Markets and Strategy, at Clafrac. 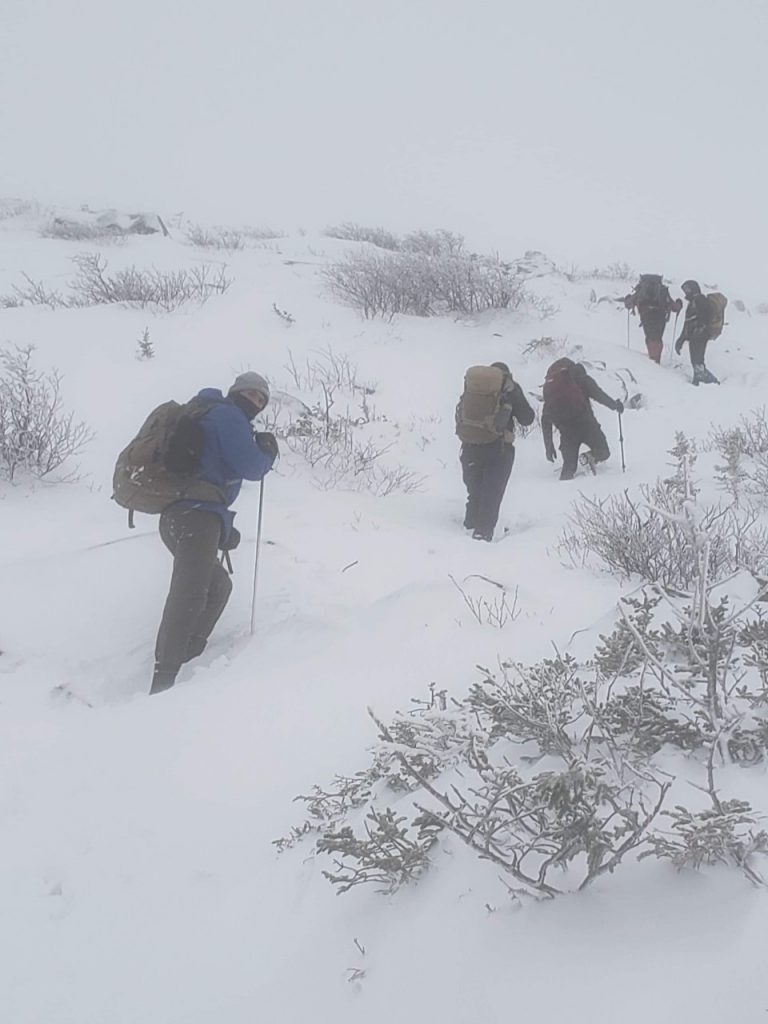 Eight members of the expedition club, led by MWO Corneau, setoff from RMC and headed towards Mt. Washington for the Fall Expedition trip. Excitement and morale was high as the crew looked forward to hiking the trails that evening, a first for many. Recent weather on the mountain ensured that the Fall trip soon became a winter trip adding a fun twist to the experience.

After arriving at a cabin located at the foot of the mountain, the expedition club prepared for the evening hike. Soon after beginning the hike, they quickly realized they seemed to be the only people on the trail. Hiking with the moon overhead was an awe-inspiring experience. MWO Corneau led the team to their shelter for the evening, which consisted of an open walled cabin. After bundling up, everyone took some rest and woke up the next morning to the spectacular views offered by the mountain in the daylight.

After a hearty breakfast, the group from RMC took off to attempt a summit. The views of the surrounding countryside became more and more remarkable as the team slowly scaled the mountain. The eight-person team climbed on until the winds took a turn for the worse. Unfortunately, after encountering winds at 80km/h, the decision was made to abandon the summit. To maintain the safety of the group and avoid gusts between 120-160km/h, the group turned back. While some were disappointed, MWO Corneau wisely said: “The mountain will always be there.”

Hiking back into the canopy immediately gave the team shelter against the wind and led to a quick descent towards the base of the mountain. After shedding their gear, the team pitched a tent at a nearby camping location before hitting the local outlet stores and finishing the day with well-deserved dinner at the Muddy Moose. The next morning, our team drove back to RMC dedicated and ready for more mountaineering in the near future.

The team would like to thank the RMC Foundation and Class of ’62 for sponsoring this outstanding trip. In addition, a special thanks to MWO Corneau for taking seven cadets up the mountain.

Debaters at McMaster: Tuning Up for West Point

RMC’s debate club sent a group of five Officer Cadets to compete at the McMaster University Pro-Am debate tournament in Hamilton. The two-day event featured five rounds of British Parliamentary debate against other schools from across Ontario and debaters with a variety of skill levels.

At RMC, debate club members train once a week to compete in these events at other civilian schools, giving them a chance to showcase their skills and develop critical thinking and debating abiliites. Although RMC did not end going to the quarter-finals or ranking highly at this tournament, they did learn a lot and had a chance to practice their communication skills and to contend with complex and relevant topics. Furthermore, it provided an opportunity to interact with future civilian leaders.

It was a fun and educational event, pushing most RMC debaters out of their comfort zones. Being the first tournament for a few on the RMC team, they were able to see how debate competitions enhance communication and critical thinking, both of which are important assets to any officer.

The RMC debate club would like to thank the Foundation and Class of ’62 for supporting this trip and allowing the club to continue to build upon its tradition of excellence.