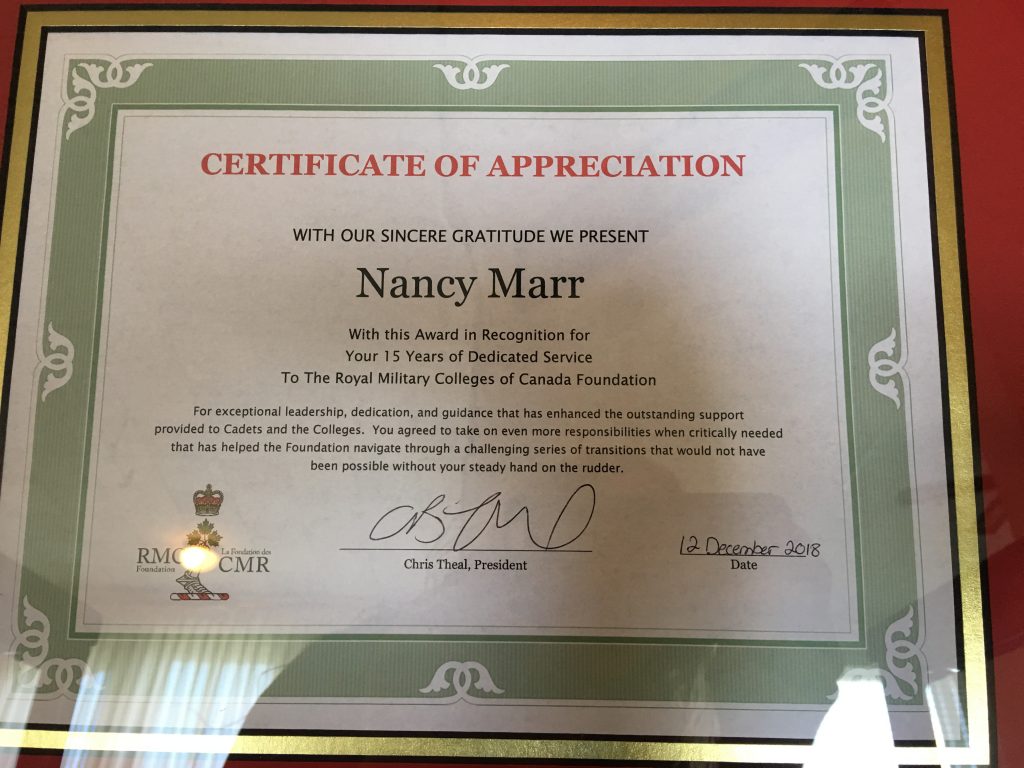 On behalf of the Board, I would like to congratulate and thank Nancy for her 15 years of outstanding contribution to the RMC Foundation. Nancy is the longest serving staff member and works diligently day-in and day-out to ensure the smooth and effective operation of the Foundation and the development of our team.

While Wednesday 12 December 2018 marked the 15th anniversary, I was in Kingston last week for meetings with College and Foundation staff and had the opportunity, along with our staff, to present her a Certificate of Appreciation for all of her hard work and dedication. A photo of that certificate is attached.

Please join me in congratulating Nancy for this outstanding accomplishment!

The RMC Expedition Club Kilimanjaro Campaign kicked off last week with two Summit Level Donations ($1000 +) one from the Ottawa Branch, and another from an anonymous donor from the Class of 1969.

In true form the Class of 1969 can’t be out done by one of their own so they have stepped up to the plate and individual donations to the Campaign from the Class has raised over $2800 at the time of this publication.

We have also received a substantial donation of $25,000 from a donor from the Class of 1962 who seen the exceptional leadership opportunity of this trip and decided to donate to the Campaign.

We are over half way to our goal and there is still time to donate to this Campaign to receive your 2018 Tax Receipt. Donating is easy, just go to: https://rmcfoundation.ca/ways-to-give/donate-online/ and click on the RMC Expedition Club to make your donation today.  Prefer to hear a voice over the phone? You can contact Jennifer Jordan at 613-541-6000 ext 6807.

Thank you to the following donors for their support:

25366 Anna-Michelle Shewfelt: The Importance of Telling Our Story