” I have so much to learn, first from the students then from the staff.”

An another in a series by Warrant Officer Chuck Ansell 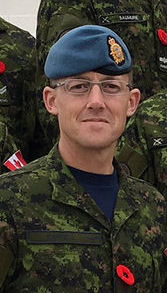 Her first assignment was to the HMCS Ville de Quebec. While there, she participated in a NATO tour, many Fishery Patrols, and rescue and recovery of Swiss Air flight 111.

In 2001, Nathalie transferred to the HMCS OTTAWA as a STIR Operator (Fire controlman) and completed a tour in the Persian Gulf after 9/11 (OP APOLLO Roto 1).

She was then posted to OSC (P) ATHENA from 2003 to 2006 as the Training Coordinator for the Maritime Operation Center (MOC) which became known as Joint Task Force-Pacific (JTF-P). In 2006, the versatile Chief was stationed on the HMCS VANCOUVER as a Fire Control Supervisor and participated in RIMPAC 2006.

From 2007 to 2012, CPO2 Scalabrini was a Recruit Instructor at CFLRS. She also spent time in the Training Development cell.

She hitched a ride on the HMCS WINNIPEG in 2012 as Sensor Weapon Controller/Above Water Warfare Director followed by an assignment at MARPAC Head Quarters as Training Coordinator for the Personnel Coordination Center Pacific (PCC (P)).

Nathalie was promoted to her current rank in 2014 and was employed as the PLQ Chief at Naval Fleet School Pacific and as Campus Support. She is currently the A Division Sergeant Major.

Since 2008, Nathalie has volunteered with the Defence women advisory organization as a member and as military Co-Chair.

Q.        Did you request a posting to RMC? If not, what was your first impression when you found out that you were posted to RMC?

A:        I did not request a posting to RMC. I was already coming to the college as a student on the NEPDP course. This posting was offered to me after the recommendations of the SSAV was published. I agreed of course.

A:        This College has so much history and it’s such a beautiful place. I will enjoy this very much.

A:        Walking the lines, meeting with cadets, getting to know them.

A: Use your time wisely, there is much to do and so little time to do it. It will become easier. Trust yourself

A:        Be kind, humble and have courage…courage to do the right thing, courage to follow your heart.

Q:        What do you see as your biggest challenge while serving at the college?

A:        Time will be the biggest challenge. There is so much I want to do and only so many minutes in a day to do it.