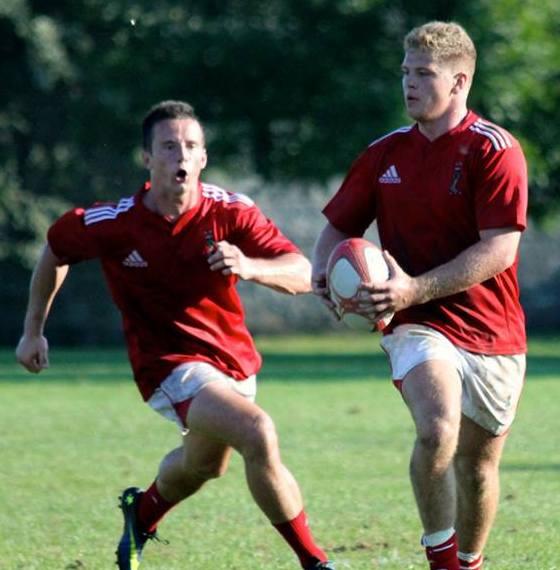 Sean McDonaugh– Much more than a rugby coach

Sean McDonaugh serves Canada as the rifle company commander in The Princess of Wales’ Own Regiment (PWOR).

His rugby connections go back a long way.

“ I began playing rugby in high school, but left it once I got to university and played varsity basketball.  I came back to rugby when I was hired by my former high school principal and football coach Mr. Clark to teach science at St Thomas High School on the West Island of Montreal.”

The personable coach added,   “He told me that If I wanted a job that I would teach Science, Biology, Music and Art.  I would also coach basketball and rugby.  Not having been on a rugby field in sometime I went out to the local club Beaconsfield and began playing again so that I would have a vague idea of what to do as a coach.”

A few years later he made an important career move.

“I took a teaching job just outside of Detroit late in 1999 and went out to play for the local rugby club.  I found that my talents as a rugby referee were probably better suited to the Mid West game than perhaps playing abilities would be.”

In most sports, players / coaches do not make good referees. Sean is an exception.

“I was very fortunate to have moved quite quickly in the officiating ranks having exposure to the international game just a couple of years after having taken up the whistle seriously.  I owe a great deal to the many people on both sides of the border who contributed to my growth as an official.”

He continued to coach at both the high school and senior club level until he took a position with the RMC athletic department as PE teacher in the summer of 2005.

Varsity rugby was ‘cut’ from the RMC athletic program in 2002. It was reinstated in the Spring of 2006 to the delight of many Ex Cadets and Cadets,

Sean applied for the fulltime coaching position and was offered the job. One could say a good example of being in the right place at the right time.

All these years later he is just as enthusiastic as he was back in year one.

“There are far too many highlights over the last twelve years to list here, but I would offer that having the chance to reconnect with the young men whom I once coached is the best part of my job.  They leave RMC nervous and full of anticipation and when they return just a couple of years later full of confidence and pride, it is amazing to see the transformation.”

When pressed he opened up on what the major challenges are regarding coaching at RMC.

“ If I was to highlight one aspect, it is the bitter disappointment I feel when a young man whom I truly believe would make a great contribution to the forces does not get an RMC offer.  We work so hard to build a relationship with a recruit and their families, exposing them to the college, the forces and what it means to put service before self.  Far too often, those efforts end in failure due to  an admin error or the ever growing nebulous those applications seems to vanish into.”

Speaking with pride and confidence he concluded the interview.

“I see my role as more than the RMC rugby coach; I am entrusted with the health and well being  of the program and answer to the relevant stakeholders to ensure that the RMC rugby team, continues to positively shape the leaders this country needs.”

My coaching peers around the OUA ranks often ask what consideration go into our five-year program.  They are intrigued to find out that the vast majority of our student athlete’s graduate in four years and that we really have four, one-year programs. Each year is a stand-alone endeavour, which has its own uncertainties and opportunities.   Since I arrived to the program in the fall of 2006, the competitive goal has always been to make the playoffs.  We have done that three out of the last four years, with the last two seasons seeing us carry a 500 record into post season. In the RMC context, a remarkable accomplishment by the athletes.

“The RMC rugby program has established itself as a competitive team in the OUA,” adds Darren Cates, Director of Athletics, “Under Coach McDonaugh’s leadership we have built our program from the ground up both on and off the field.  Sean has created a close, competitive team and has connected the current team with ex-cadet rugby players across the country”

Our 2017-18 recruit class will provide some speed at wing and full back with the additions of Kingston natives Josh Andrew and James McDonald and some cover in the centers with Taylor Vida from Calgary Alberta.  Overall, this has been a problematic recruiting year as we have lost a number of blue chip prospects to a variety of systemic obstacles and just plain bad luck.

The 2017 season holds just as much promise and predicaments as every other season.  Questions remain as to who will play the skilled positions up the middle that are so crucial to fielding a competitive side.  With the graduation of Max William (Hooker), Alex Markovic (8 Man), Blake Sullivan (Scrum Half), Tyler Gill (Fly Half) and Matt Courtney (Full Back) there is a great deal of unknowns. We will once again introduce a dozen or so young men to the game of rugby mid way through August and some of them will be called upon to start for the Varsity side by Labour Day.

The pack will be lead by stand out tight head prop Cole Milne (Victoria BC) he will be counting on 2nd yrs Thomas Weissenborn (Guelph ON), Will Hand (Fredericton NB) and Brett McClatchie (Smiths Falls ON) to continue their growth and move from support players to leadership positions.  The back line will return Tim Lo (IV yr London ON) and Jacob Venne (III yr Rawden QC) with Nathan Baclayanto (II yr Ottawa ON) hoping to fill the half back spot.  The big question will be Ian Smith (IV yr Barrie ON) who suffered a significant eye injury at the National University 7’s Championships.  Will he be willing and able to play again?

The goal is the playoffs, if we stay healthy and have a reasonable then a post-season might be in the cards.

Classes over: No rest for the wicked