“Today, in countries around the world we are seeing challenges to our understanding of leadership – essential qualities of leadership are being turned on their head. Leadership is about values, ethics and character and that is where power should come from.” 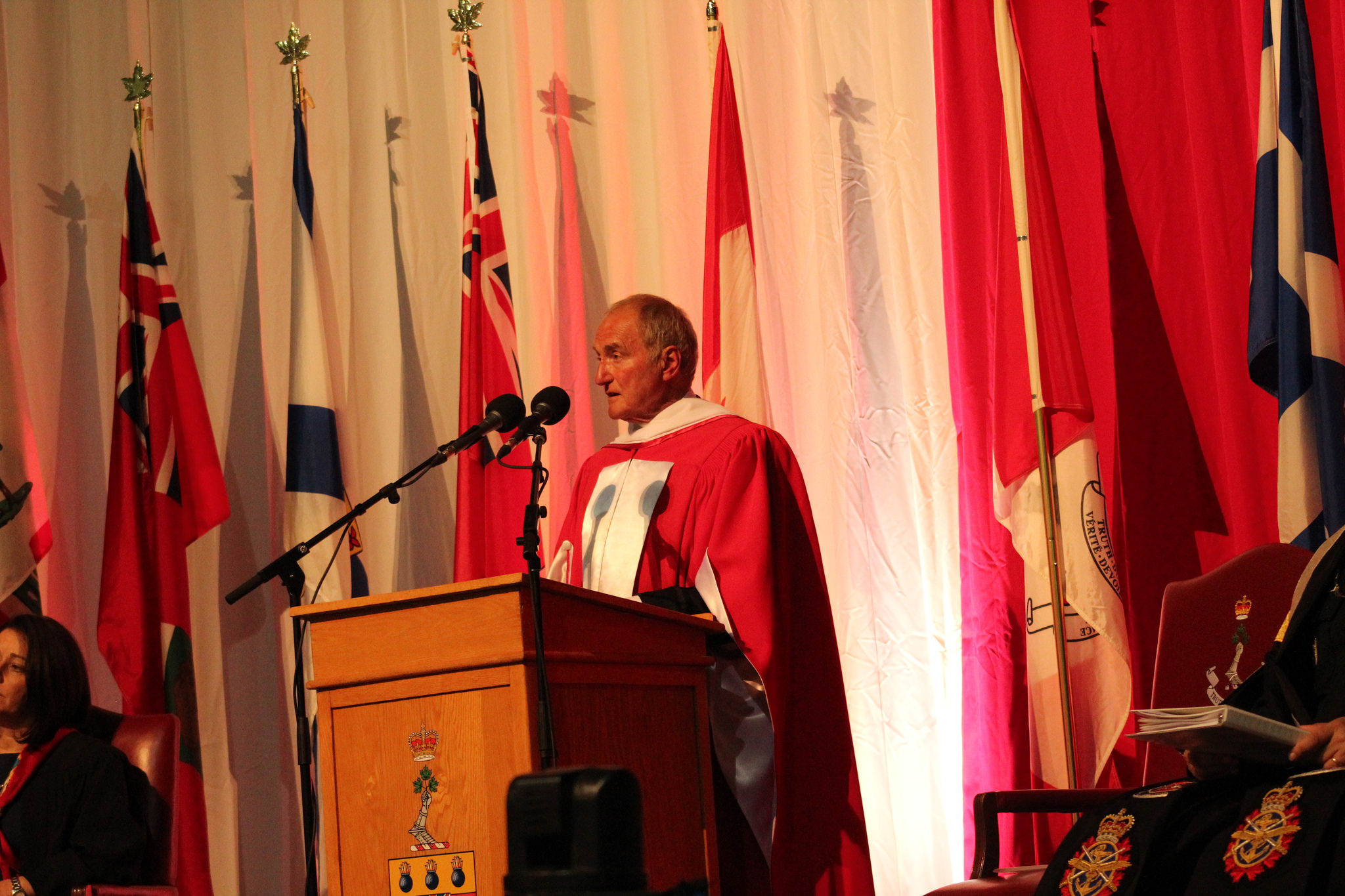 I would like to thank the RMC Senate for granting these honourary degrees to Dr. John Allen Stewart and me. We are deeply honoured. C’est un très grand honneur pour nous.

I also wish to acknowledge the presence of the Honorable Harjit Sajjan, Minister of National Defence; The Honorable Peter Milliken, Former Speaker; Bgen Bouchard, Commandant; Dr. Kowal, Principal; CWO Hoegi;  Dr. Al Stewart and his wife Angela; Serving and retired Generals and Flag Officers, Distinguished guests, Faculty of the College, Members and Officers of the Canadian Armed Forces, Family and friends of our graduates, and most importantly, fellow graduates of the Class of 2018!

I want to thank all of you – the graduates – for the opportunity to share this special day with you.  I know what it is like to have pushed yourselves physically and mentally to your absolute limits. This day represents a tremendous accomplishment.  My congratulations to each of you! Mes félicitations à tous et chacun de vous.

And to your families:  as you have learned, if you didn’t know it beforehand, having a son or daughter, a husband or wife enrolled at RMC is an experience unlike any other.  I know how much strength you have needed, as you watched your loved one endure the demanding – often gruelling – training.  Today is your day, as well – we are celebrating your achievement as a family.

It is exactly 50 years since I sat where you are sitting, and graduated from RMC. Fifty years is a long time – and over those 50 years the world, Canada’s role in the world, the face of our armed forces and the demands that we make of our military – all these have been transformed.

But some things have not changed.  The run from here to Fort Henry, for example – that has not gotten any shorter or flatter.  The exacting standards of RMC, from academics, to physical fitness, military training and second language training – the four pillars – those have not changed.  I will never forget my first day at College Militaire Royal de St. Jean.  I must have made my bed at least 50 times that day, until a penny could bounce off the sheets.  But I had my revenge.  A few years ago, I was the chair of the Senate National Finance Committee.  We made the recommendation that led to the government abolishing the penny!  It took over 40 years – but ex-cadets can be very patient!

You have heard many times over the past four or five years that you were being trained to be leaders – as officers in our armed forces, or in some other field of endeavour where your lives take you.  That is part of what makes RMC unique.  It is the only college or university in this country that is 100% dedicated to training leaders.

Another unique facet of RMC is that, unlike every other academic institution in our country, its entire focus is service.  Combine leadership and service, and you begin to comprehend why RMC graduates have played such an outsized role in the building of our nation.

The examples are legion.  For instance, Canada has selected a total of 14 astronauts since the first team was created in 1983.  Five of those astronauts – more than a third – graduated from RMC.  One of them is now our federal Minister of Transportation, the Honourable Marc Garneau.  An interesting coincidence:  when I was a cadet in my third year, Roméo Dallaire was in second year and Marc Garneau in his first year.  One astronaut out of the three of us is not bad!

This is your heritage now, as graduates. You are graduating today to become Canada’s leaders of tomorrow – to play an important role in building the future.

You will face great challenges – there is tremendous unrest in the world.  We are more deeply connected than ever before in the history of humanity – and yet in too many nations, people are more deeply divided than we have seen in many years.  There is a disturbing rise of so-called populist leaders in nations around the world, along with an alarming increase of intolerance, including racism, and deep anger, even rage.  It is a toxic soup.

None of us knows where this will go. Sir Winston Churchill once said, “I always avoid prophesying beforehand, because it is much better policy to prophesy after the event has already taken place.”

Churchill rightfully acknowledged he was no prophet – but he was something better.  He was a true leader, and that is why he succeeded.  That is what RMC has instilled in you – and what Canadians need from each of you.

Today, in countries around the world we are seeing challenges to our understanding of leadership – essential qualities of leadership are being turned on their head. Leadership is about values, ethics and character and that is where power should come from.

As Air Commodore Leonard Birchall said:  “Your leadership is judged not by your rank, but by whether your men and women are completely confident that you have the character, knowledge and training that will allow them to trust you with their lives.”

We are reminded of our motto:

We are seeing too many examples of leaders throughout the world who seem to have problems with truth.

And we have seen the corrosive effect this has, as anger and lies replace respect and honest debate. It falls to all of us as citizens of democracies to defend against this.

When recalling his own graduation from RMC, retired Lieutenant-General Roméo Dallaire observed that the world today is very different. He explained:

“There is nothing static or stable about the status quo anymore. It’s shifting all the time….  Your challenge is to lead in a time of perpetual and rapid change”

Meeting these new challenges is what all your training of the past four or five years has been about.  But you know that studying what to do, is, on its own, never enough.  Good leadership requires continual learning, learning from those who have gone before us, learning from the non-commissioned officers with whom we work. Leadership requires rock solid values, ethics and yes, character. Acting with integrity and honour. And sticking to our founding motto of:  Truth.  Duty.  Valour. Vérité. Devoir. Vaillance.

Then you will be true leaders, whether leading men and women in combat, or as head of an organization or, our nation’s government.

Today you will, for only the second time in your years here, march through the Memorial Arch, this time, to leave RMC.  But in my experience, RMC is not a place we ever leave behind.  The bonds we formed with members of our class, the influence of our professors and military mentors – these are lasting ties. It is those ties, those bonds, that contribute to our success.

The RMC Class of ’62 felt so strongly about those bonds, they are donating RMC graduate neckties and scarves to each of you.  Wear them with pride.

Our famous Memorial Arch that you will soon walk through was actually built by the Ex-Cadet Club of Canada and other friends of the College, in 1924.  In 2000, a committee was formed to refurbish the Arch.  That committee was headed by Major General John Stewart – 3173 John Stewart (RRMC RMC 1953):  none other than the father of Al Stewart, more formally Dr. John Allen Stewart, with whom I am honoured to share this podium today.

Let me urge you, whatever you do and wherever you end up, to maintain those bonds.  Engage with the RMC Club branches throughout Canada and elsewhere, and stay in touch with your classmates.

Thanks to the tremendous efforts of Bill and Rolande Oliver we can more easily stay informed through our electronic newsletter E-Veritas.

Tomorrow as you stand as graduates outside the Arch, take a look at the names and college numbers on the stones beneath your feet.  When the need arose they stepped forward to help refurbish the arch. You will be standing on their shoulders.

There will always be a new projects falling to graduates and friends of the College. One current project I hope you will embrace is a new museum.  As you undoubtedly know, the Fort Frederick Martello Tower had to be closed and vacated two years ago.  The Tower was the main display space for RMC’s remarkable collection of artifacts and historical relics.  There is a movement now to build a new museum at RMC, and to make it a gift from the graduates and friends of RMC.  Like the Memorial Arch, it will be a statement by us who came before – which will now include you – to all who come after us.  Here at RMC, the future is built on a proud, strong history that binds us all together. My congratulations to former graduates Commodore Ed Murray and Major General Frank Norman for their leadership on the museum project.

Before I conclude my remarks today, I would like to remind all graduates of the saying: “To whom much has been given, much is expected.”  As graduates of this remarkable institution, you have been given a real opportunity to make a difference in the world.

Your professors, the members of your class, and the body of graduates, me included, look forward to seeing how, in the years ahead, you go out in the world and apply all that you have learned here.

I will close with something that President Harry S. Truman often referred to.  He liked to quote an epitaph on a tombstone located in, appropriately enough, the town of Tombstone, Arizona.  The epitaph read:

Truman said he thought that was the greatest epitaph a person could have.  I agree.  So you, the graduates of RMC 2018 – go out and do your damnedest!

Convocation: Meet the Class of 2018