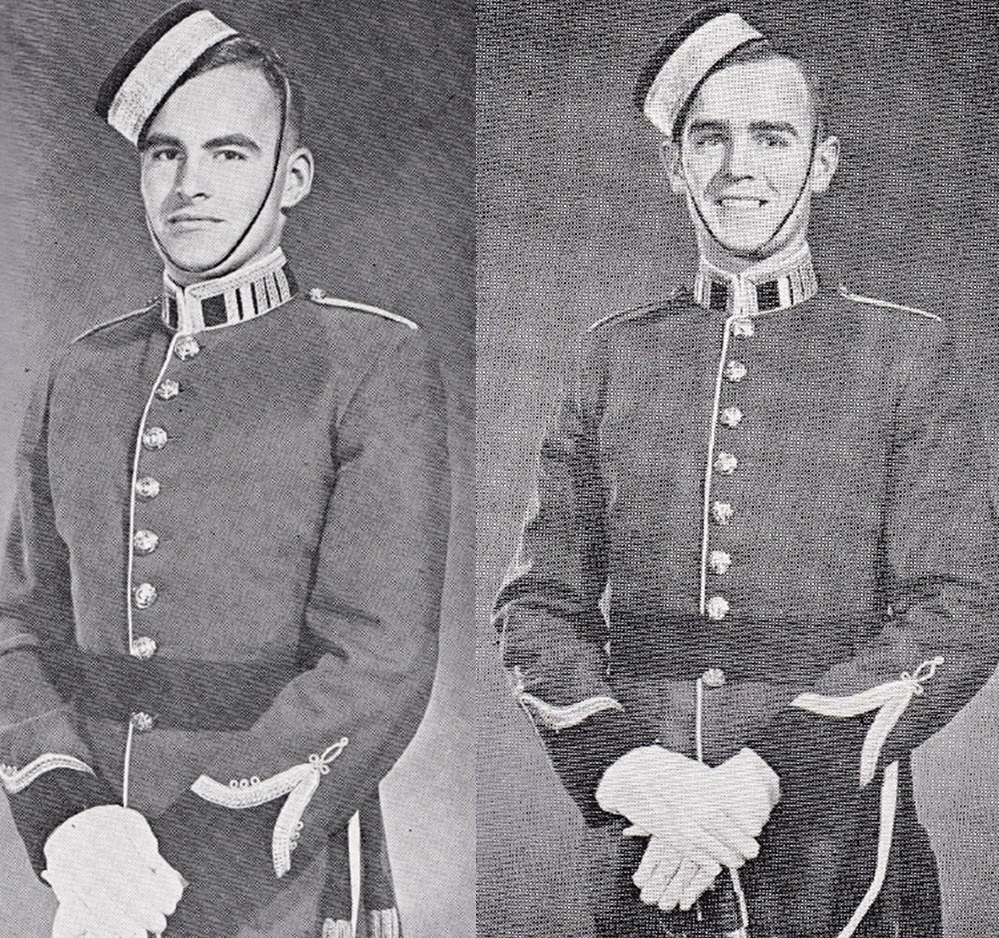 All the dignity, rigidity, and esprit de corps that is R.M.C. was never so close to our hearts as when the cadet in the long red line of 1957 marched off the square for the last time.

We were too subjectively involved, each one of us, in the graduation ceremonies to realize the panorama of it. But our guests and beaming relatives assured us that it was moving and colourful. However, most of our thoughts were wandering a little (at least mine were) to the series of events that made the previous week seem a minute.

These events stand out in each of our minds in a different rank of importance, but to avoid semblance of any prejudice they had better be recalled in chronological order. The stag started the ball rolling. We thought some heads might roll, too! In accordance with the mood of the evening, a stein was presented to honorary member of our class, Staff Sergeant Griesbach. This amiable the instructor did a great deal for us by generously giving his time “beyond the call of duty.”

A “get acquainted” cocktail party was held on Saturday afternoon for the graduates and their girls. By Monday evening at the Barn Dance, we felt no further need of introduction, as sharing this informal fun was enough integration in itself. Gay and original outfits (and not a tight collar in sight), wonderful fare, and rhythmic old time music helped to make this dancing was a far cry from the parade square drill.

A different type of dance, though equally informal, due to a roaring fireplace, more good food and smooth music, took place at the Gananoque Canoe Club on Tuesday night. The Club overlooked the moonlit water and overflowed with the good spirits of couples who did not overlook the moonlight.

Wednesday was official “rest day” which we took like a distasteful but necessary medicine to prepare for the final epitome of the years spent at R.M.C. – the Graduation Exercises. Although rain was forecast for Thursday, C.S.L. Earl Law had everything so well organized that sunny skies came as ordered. Earl won five well-deserved academic awards at the prize-giving ceremony and special gratitude from his classmates who reaped the fruits of his efforts in planning the wonderful week. Thursday’s activities began at 9 a.m. when Maj.-Gen. S. F. Clark, General Officer Commanding Central Command, arrived at the College to watch our gymnastic and physical training display. Then the pipe band’s performance set the stage for the Cadet Wing inspection by Maj.-Gen. Clark, during which one of the country’s finest bands, H.M.C.S. Stadacona, played.

The ‘General Salute’ was the sign for the band to strike up “Auld Lang Sang” for us, the graduating class, to slow march into Currie Building. The class and their guests were addressed by Maj-Gen. Clark and Air Commodore D. A. R. Bradshaw who was leaving R.M.C. with us for a new posting at St. Hubert.

That evening we visited Paris where we viewed surroundings on a pink cloud atop the Eiffel Tower. C.S.L. Spence Volk’s clever decorations made the atmosphere thoroughly convincing. Traditionally, as the sun rose over Cedar Island, we posed for our final picture as a class. To prevent melancholy we gathered at the British American Hotel for an early morning breakfast.

Driving through the Arch during Ex-Cadet Weekend, I noticed the effect of light at night on the dark Arch. It is my sincere belief that in the years to come our training at R.M.C. will shine throughout our lives as do the floodlights of the Arch.