Financial Support from the RMC Foundation to the Sandhurst Team

The recent article on the Sandhurst Team and the subsequent comment by MGen (Ret’d) Herb Pitts has created some confusion that I believe needs clarification.

The Sandhurst Competition is a military skills competition held at the United States Military Academy at West Point, New York. It has been running in some form since 1967. The history may be found here

When RMC entered the competition in 1997, they were primarily funded through public monies. However, the RMC Club of Canada Foundation supported the team in an ad hoc fashion using unrestricted donations to enhance their training and competitive edge.

In 2006, however, the members of the First Canadian Parachute Battalion stepped up to the plate and made a significant endowment to annually support the Sandhurst Team. In their words:

“The skills, determination, fitness and leadership needed to win (and participate) in this competition were much related to the job of the Paratrooper. The Association was in the throes of “wind down” as members aged but they embraced the project of supporting the RMC Sandhurst team.”

In the first instance RMC Foundation support to the Sandhurst Team comes from the Sandhurst Endowment created in 2006 by the 1st Cdn Para Bn.

Subsequently, my predecessor approached the Class of 1964 to create an Endowment that would augment the financial support provided by the 1st Cdn Para Bn Endowment to ensure sufficient funds were available in any given year in support of the Sandhurst Team.

And so that is where we currently sit. The RMCC Sandhurst Team is supported annually by the RMC Club of Canada Foundation, initially from the First Canadian Parachute Battalion Sandhurst Endowment and then the Class of 1964 Endowment to ensure they have the “Margin of Excellence” to, not only compete in the competition, but to come home the victors.

I read the latest e-veritas as soon as I received it. As usual it is of great interest. You are continually finding new points of interest to all members of the RMC Family. 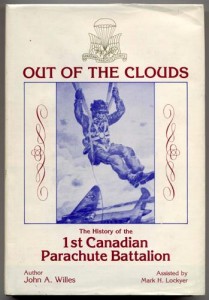 2897 Herb Pitts excellent article, Setting the Record Right, resonated strongly with me because of its direct connection to leadership in battle at the platoon and section level. There is also a direct connection to RMC which should make his article of special interest to the RMC Family and, in particular, the RMC Sandhurst Team.

In the Night of June 5th-6th, 1944 the 1st Canadian Parachute Battalion parachuted into Normandy on the Eastern side of the Dives River and successfully achieved its objective of establishing a strong point east of the Dives River to protect the left flank of the Allied landing beaches from assaults by German armour. To my knowledge, four RMC Ex-Cadets were part of the Battalion’s Normandy drop, 2578 Lt R.C. Hilborn, 2650 Lt J.M. Rousseau and his brother, 2803 Lt J.P. Rousseau, and 2712 Lt H.M. Walker.

Lt J.P. Rousseau’s platoon was to land on the far left of the Battalion’s Drop zone. However with the winds, the plane drifted farther to the left and he was ambushed and killed on landing. Lt Walker landed safely with C Company which suffered large losses of personnel and equipment. Nevertheless they courageously tried to achieve their objectives of establishing a strong point at the Le Mesnil Crossroads but were badly outgunned and Lt Walker was killed by a direct shell burst from a German 88mm gun. Lt J.M. Rousseau survived the fierce battle of Normandy and was later transferred to another area to help out and was killed in action. Lt Hilborn survived the battle of Normandy and participated in the battalion’s remaining battles, the Battle of the Bulge December 1944-January 1945 and the Crossing of the Rhine March-April 1945.

There have been some good histories of the 1st Canadian Parachute Battalion written. One of them, the 50th Anniversary Edition of Out of the Clouds; The History of the 1st Canadian Parachute Battalion by John A. Willes, is excellent from a platoon level leadership and inspirational point of view. For example, it includes a picture of the two Rousseau bothers together just before the Normandy drop. I will look into having it and one or more of the others added to the Class of 1956 Leadership Book Collection in the RMC Library. 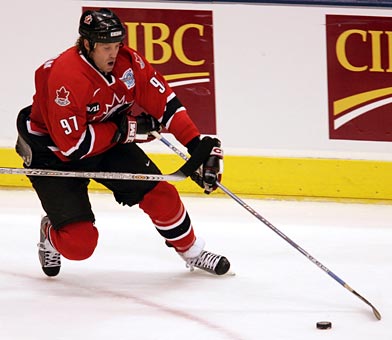 The Night Joe Thorton Was Steam-rolled by OCdt Kyle Paul

I saw the photos you posted on today’s e-Veritas. Not sure if you are looking for insights on them, but I saw the one photo of Andy Scott and Kyle Paul … that was taken in Dec 1996, when KP and Ryan Latinovich were selected to play against the World Junior team.

I went to that game (with Bill Hurley and Bill Graham of the Business Department). Funny enough, there were a couple of other coincidences in that game … Kelly Nobes was also on the OUA team … and Mike Babcock coached the National Junior Team. You may want to mention in your notes that Joe Thornton was on the Junior Team, and in one sequence KP absolutely destroyed him behind the net. Granted, KP had about 5 years and 40 pounds on Thornton, but it was fun to watch.

I was looking on-line for info about an RMC Club Branch in the US, and found nothing. I seem to recall that there used to be a Branch of the club in New England – was there?

I’m sure there are a few ex-Cadets in the US (I personally know a couple) and, although it would difficult to get together with any regularity, with the internet we could form an on-line network. Any insight on this?