Kingston, Ont. (March 16, 2019) – The Paladins will play host to some of the best university rugby 7s players from across the country, when the Rugby Canada University 7s Championship is held at RMC on March 22-24. The men’s tournament goes Friday-Saturday, followed by the women’s on Saturday-Sunday.

“We are extremely proud to be hosting the Rugby Canada University 7s championship at RMC,” RMC Director of Athletics Darren Cates said. “We have a tremendous facility for this event and the student-athletes participating from across the country will enjoy their experience in Kingston.”

RMC boasts a full-size field inside the dome at the KMCSC, where all of this weekend’s games will be played.

The Championships attract teams from as far away as the University of Victoria and as close to home as Queen’s, so RMC will be in tough when their men’s team enters the tournament this year.

Sean McDonaugh is the long-time head coach of the Paladins men’s rugby program, coaching the 15s team in the fall and the 7s team throughout the winter.

“Under coach McDonaugh we have built a strong rugby program,” Cates said. “Hosting this event not only allows us to compete against the best in Canada but also promotes RMC, the Canadian Armed Forces, and our team in the rugby community.”

RMC has a couple players to watch heading into the championship, namely Glenn Butler and Josh Andrews. Butler is fresh off a stint with the Canada U20 15s squad on their European tour, while Andrews traveled to New Zealand late in 2018 with the Canada U18 7s team for the World School 7s tournament.

In terms of team expectations for RMC, McDonaugh’s assistant coach said anything can happen in rugby 7s.

“It’s always hard to predict in a game like 7s, since teams tend to be so evenly matched, and even just one mistake can provide a turning point,” Beth Barz said. “We have tried hard to control things like training, systems and fitness so our preparation should allow us to compete well.”

RMC plays their first game of the tournament at 5:40 PM on Friday evening against Waterloo.

RMC’s Athletics Wall of Distinction (AWOD), founded and sponsored by the Class of 1970 through its endowment fund managed by the RMC Foundation, was established to honour those who have brought distinction to the college through significant achievements and contributions in sport while at RMC and/or following graduation throughout their athletic careers. After the first induction class in 2017, the selection committee is proud to present another accomplished group of inductees in 2019. 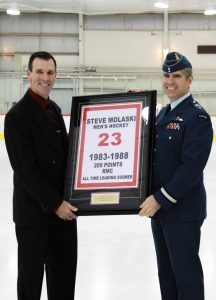 At the upcoming AWOD induction ceremony on 28 March 2019, RMC Athletics is proud to recognize Steve Molaski in the Athlete category for his exceptional accomplishments in hockey.

“Upon reflection, it is a great honour to be recognized with several outstanding athletes and builders,” Molaski said. “I think I will enjoy cherishing this moment by sharing it with my teammates and family most of all.”

Unable to attend this year’s award ceremony due to his PSP assignment to Kuwait, Molaski will be the keynote speaker in 2020. His plaque will be placed on the wall this spring with the rest of the 2019 inductees.

Over his five-year career on the RMC hockey team, Molaski quickly earned the reputation as a prolific scorer. After winning the Memorial Cup in Junior, Molaski went on to finish sixth in OUA men’s hockey all-time scoring with 205 points (76 goals and 129 assists), in addition to earning numerous RMC records. Some of Molaski’s notable accomplishments rank among his favourite memories from RMC.

“On a personal note, beating University of Waterloo 10-8 and having an eight-point game,” Molaski recalled. “From a team perspective, defeating USMA West Point on two occasions.”

During his university hockey career, Molaski was recognized across the league as a dangerous scorer, earning OUAA All-Star honours in four of his five seasons. To honour his achievements, RMC retired Molaski’s #23 in 2015.

Another of Molaski’s favourite memories was graduating and starting his military career after earning the Prince of Wales Cup in his final year at the College. Staff and fellow cadets from his time at RMC continually recall not only Molaski’s skill on the ice, but also his well-roundedness, and especially his leadership.

Looking back on his time at RMC, Molaski credited the institution with instilling in him many important lessons that he has carried forward into his military career.

“Being prepared, focused, and competing at the highest level – and having to succeed in no failure missions,” he said. “Serving on military operations is all about winning, especially on high intensity combat missions.”

Molaski is unparalleled in RMC hockey history, as players to this day continue to chase his numerous records. 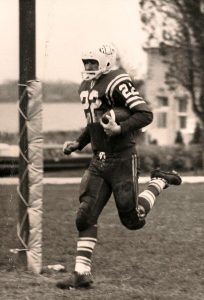 At the upcoming AWOD induction ceremony on 28 March 2019, RMC Athletics is proud to recognize Doug Smith in the Builder and Athlete categories for his exceptional accomplishments in multiple RMC sports and later as a university and college football coach.

“I am proud to be inducted as a representative of my teams and our coaches,” Smith said.

Keeping busy during his days at the College in the late 60s, Smith spent every year on the varsity football team in addition to making a few other teams at RMC. The natural athlete that he was, Smith also played varsity rugby and junior varsity hockey during all four years, plus suiting up for the boxing team in his rookie year.

The multi-sport athlete was best known for his prowess on the football field, never missing a game and often playing on both sides of the ball. In his senior year, Smith captained the football team and earned himself regional CCIFC East All-Star honours as a halfback in addition to a CIAU honourable mention at the national level.

Smith’s playing career, while impressive, is dwarfed by his status and longevity as a football coach. The first half of his coaching career, which extends to the present, was spent at Canadian universities before he moved south of the border. Smith had his first coaching role at RMC, where he learned what was required to get the job done, both on and off the field.

“The full commitment to achieving objectives, all the while respecting the related personnel that were involved helped me tremendously in military and civilian occupations,” he said.

After getting started in the coaching industry at his Alma Mater, Smith followed former RMC football coach Doug Hargreaves across the causeway to join Queen’s as an assistant coach, where the pair would go on to win multiple conference championships, as well as Smith’s first Vanier Cup. A second Vanier, as well as more conference championships, came Smith’s way during his tenure as an assistant coach at Toronto.

Smith’s dedication to coaching, which was always done on a part-time, volunteer basis, was demonstrated through impressive results obtained by his teams and the accomplishments of the specific players he worked with. During his days coaching in Canada, Smith coached multiple athletes who went on to earn places in the CFL, and was individually recognized for his work in 1992 as the national Volunteer Coach of the Year.

Since moving to the US for work in 1994, Smith has continued to coach, successively joining the staffs at multiple NCAA DII schools and a couple Junior Colleges. Again, numerous athletes he worked with excelled, and some Junior College players have gone on to compete in some of the biggest NCAA games.

Looking back on the place where it all started, Smith recalled some fond memories of RMC all those years ago.

“I still remember the camaraderie and well-being that the school instituted – the hard-working and full commitment of my teammates and players to achieve the intended results,” he said.

Accomplishments as an Athlete:

Accomplishments as a Builder: 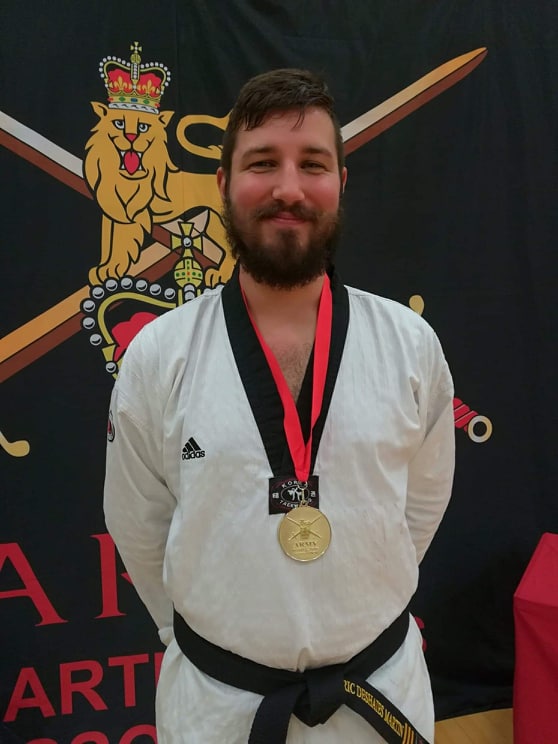 Former captain of the RMC Taekwondo team from 2011-13, Éric Deshaies Martin won the gold medal at the UK Army Martial Arts Association Taekwondo championships. He won his first match 6-0 and then finished the day with a 27-15 final score against his opponent from Malawi who will be representing his African nation at the upcoming World Taekwondo championships in May.

The ex-Cadet will now be representing the Army in a competition against the UK Navy and Air Force. 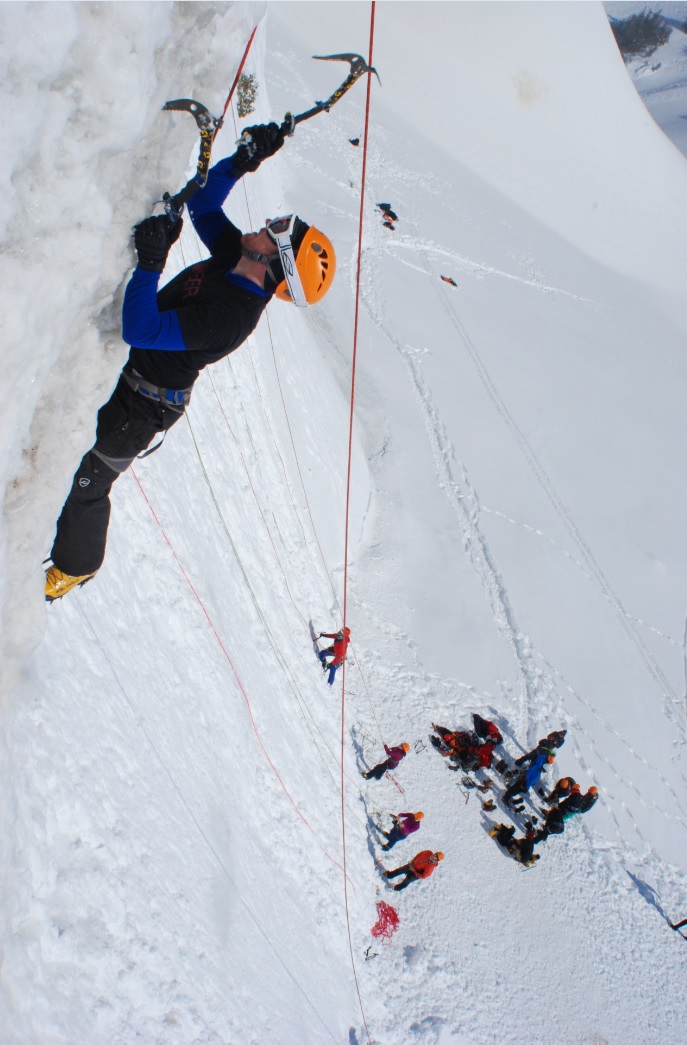 Half of the group (Maj Ryan Grant, NCdt André-Maxime Dubé and OCdt Jeremy Banks, who have never ice climbed before) learned how to top-rope on ice climbing and the basic techniques of ice climbing, while the other half learned how to and perfected lead ice climb. OCdt Augustin Mirea is an experienced ice climber and OCdt Evan Courtis and NCdt Christophe Nguyen actually ice climbed for the first time last year thanks to the 2018 ice climbing trip funded by the RMC Foundation.

A short explanation on technical stuff: Top-rope climbing means that you’re climbing with an anchor set-up above you: a rope runs from the belayer (partner taking care of your security), up the wall to an anchor and finally back down to the climber. While top-roping, risks of huge falls are greatly reduced as the slack in the rope is continuously taken away and the anchor holds the rope from above. Lead climbing means that you’re the one clipping in protection as you climb: if you were to fall, the distance would be twice the distance of you from your last protection plus rope stretch. Now, the difference between lead rock climbing and lead ice climb is that you have to set up ice screws in the ice and then clip yourself on them which is a supplemental technical step. Another difference is that since ice is more fragile than rock you have to put in additional anchor protections to reduce risk of your whole anchor set-up to fall off. Ice climbing is an extreme sport, physically demanding as you have to support your own weight for lengthy amounts of time, and is a technical discipline because it relies heavily on feet/crampons orientation as well as precision use of ice tools/axes.

This activity is an opportunity to learn outside of the classroom: learning on site and applying technical knowledge right away. It was also a big leadership experience, as this is a cadet-run activity. OCdt Evan Courtis and NCdt Christophe Nguyen coordinated the entire activity together: from selection of participants, buying everything, negotiating with the guide companies and finding lodging, to taking care of meals, taking care of security and first aid preparations, and coordinating a group of people and making sure that everyone learns and has fun doing so.

Thank you to all who donated through the RMC Foundation to make this incredible experience possible.