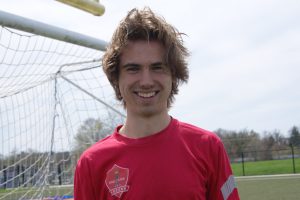 The RMC Athletics Department is proud to announce the addition of local athlete Dylan Hoare to the Paladins soccer program for 2018-19.

“We’re getting one of the best recruits in Kingston,” Mendes said. “He played senior men’s soccer last summer, and I watched him push grown men off the ball. Dylan has the potential make an immediate impact for us.”

With numerous options coming out of high school, serving his country, staying local, and becoming a Paladin were always high on Hoare’s priority list.

“I was looking at four other schools: Queen’s, Algonquin, Carleton, and McMaster, but RMC was the best option for me,” he said. “I was considering RMC even before I got an offer from the soccer team.”

Military service combined with a good education and the opportunity to play university soccer drew Hoare to RMC. He’s following in his family’s footsteps, since his father is a Signals and Communications Officer, and his grandfather also served in the military.

At RMC, Hoare aspires to become a Naval Warfare Officer and receive a degree in psychology. On the field, Hoare has been playing in a midfield or defensive role at Holy Cross, and coach Mendes will incorporate the Kingston local into the Paladins lineup as a holding midfielder.

The Paladins play their season opener at home against Laurentian on September 1, 2018.

Sarabjot Anand: Well travelled since marching out through the Memorial Arch