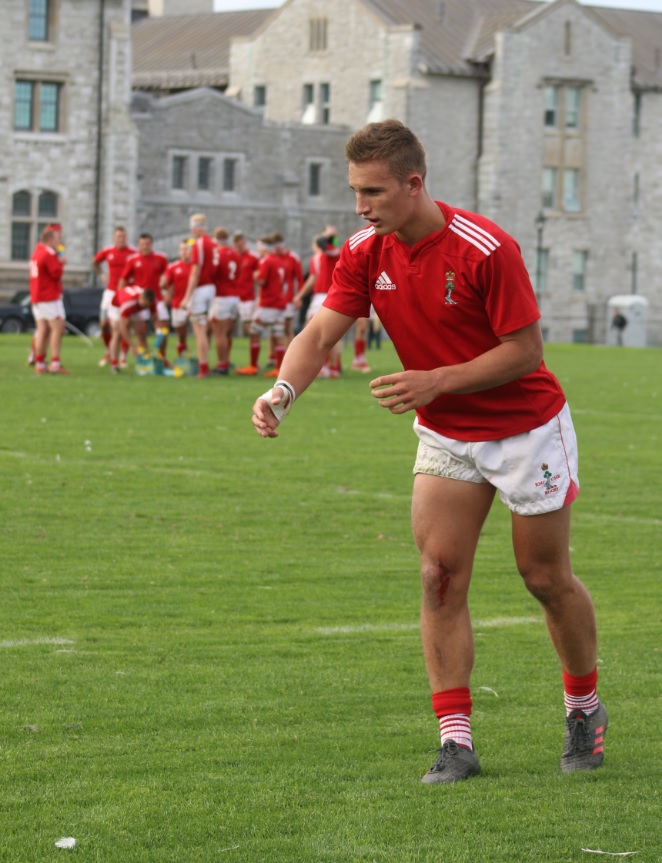 RMC Rookie off to Europe with Canada Under-20 Team

A generational talent, being selected to the U-20 roster puts Butler among the top rugby players to ever come through RMC.

Butler joined the Paladins after playing with Canada’s U-18 team last summer. Before he left, the RMC fullback said he’s looking forward to being back in the red and white of Team Canada.

“Growing up being in the system, then getting recognized, and then finally being able to showcase your skills and what you have,” Butler said. “It feels really good.”

In the fall with the Paladins, Butler led the team in points and hits, finished as the top rookie scorer in the OUA, and was seventh in the league overall in points. The impressive accomplishments added up to OUA All-Star honours for Butler.

The standout rookie will once again be among the younger players in the locker room on the U-20 team, but that’s something Butler sees as an advantage.

“I’m going to learn so much from the guys around me and playing opponents that are world class,” he said. “It’s a really great opportunity to be in the system one year later so we can learn so much this year from that higher level and then come back next year and excel our game even more.”

After a selection camp to start 2019, this tour is the team’s next step in their preparations for upcoming qualifiers against the USA to ultimately play for the World Trophy. The squad for the USA qualifiers will congregate at Shawnigan Lake School on May 14 to prepare for two games vs the USA at the end of May and start of June. The winning team, based on a two-game aggregate score, will go to Sao Jose dos Campos, Brazil July 9-21 for the World Trophy.

In the end, Butler has a lot of rugby on the international stage ahead of him this year. The engineering student will have gained a wealth of experience before returning to RMC for the 2019 OUA season in the fall.

“It’s going to be such high-level rugby,” Butler said. “I’m going to learn a lot of new techniques, new systems of the game, and hopefully I can bring it back and integrate it into the RMC rugby team and elevate our club as a whole.”

With notes from Rugby Canada.