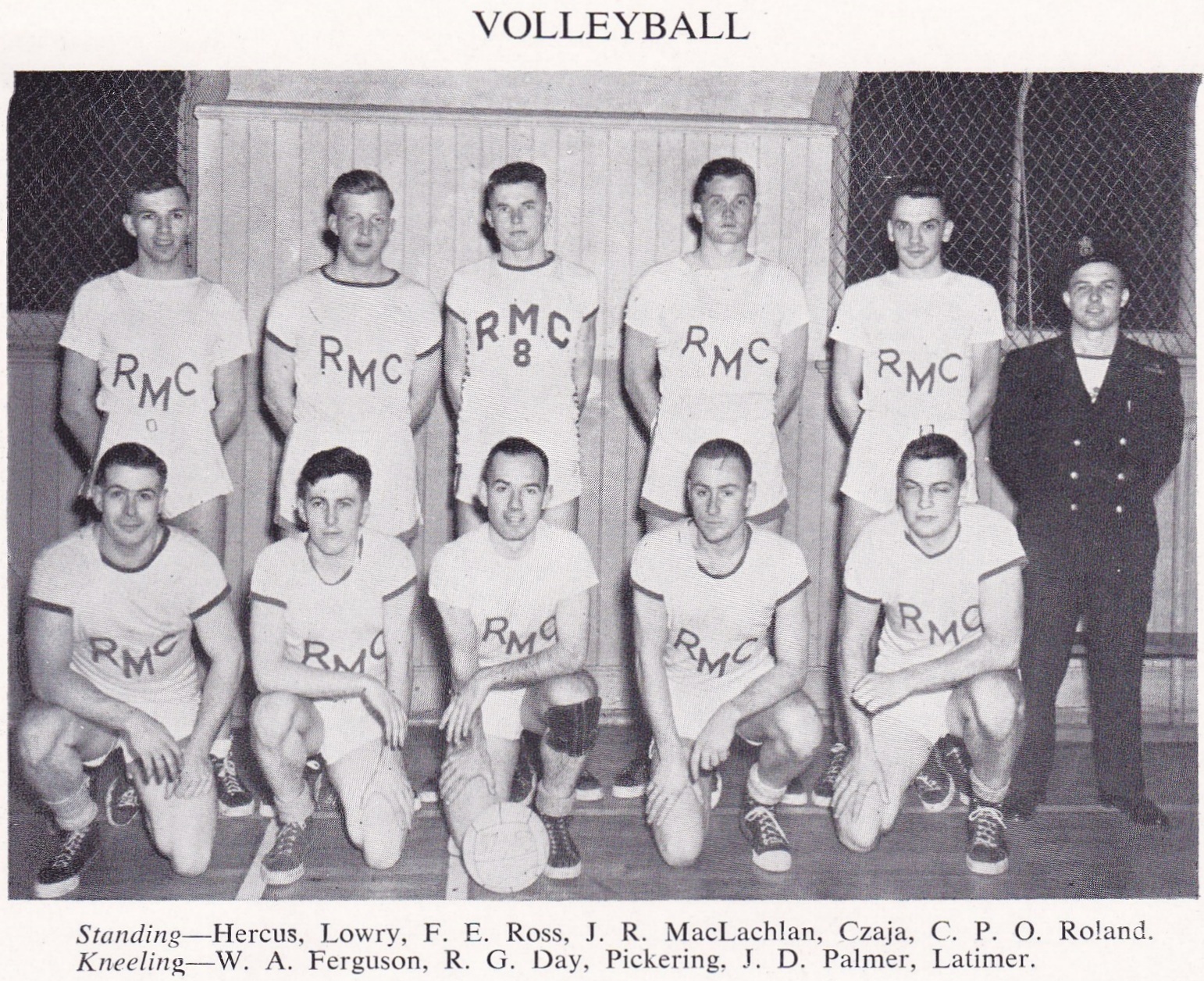 SPORTS AT RMC IN THE POST-WAR ERA #10 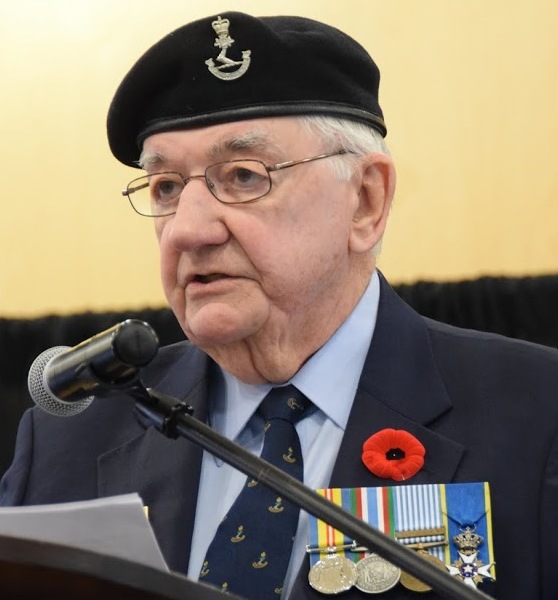 Another core sport, or not?  Some uninformed people today might be uncomfortable with seeing rifle and pistol shooting being classified as a sport.  However, even the inaugural 1896 Olympic Games had five shooting events and the Games now have 15 events  in three different groups:  rifle, pistol, and shotgun.  It is not at all surprising that this sport would also be a key component of sports programs at military institutions.

In 1950 “The Marker”, November 17, ran an interesting story about skeet shooting having been introduced as a new sport at the College.  Skeet shooting, developed at Andover, Massachusetts in 1920, was a worthy substitute for shooting at real game and quickly became a competitive sport.  Col. E. F. Easterbrook of the U.S. Army, an experienced skeetman who was in charge of skeet shooting at the Staff College, came over to RMC to help introduce the cadets to this sport.  Initially, only second and third year cadets who had shown an interest in rifle and pistol shooting and who were proficient in shooting could participate.

In 1951 in a pistol shooting competition held in March between the Cadets and the Staff “all contestants were required to wear hip-length rubber boots to keep dry because the firing line was on the other side of the underground river we have in the range and the Engineers have not as yet constructed a bridge for us”.  Conditions for shooting back then were not great, to say the least.  The cadets, led by JB Ford and  DJG McKinnon had a slight edge over the Staff team led by Major Fawcett, Mr.Wilson and Mr. Shaw.

Further good news of RMC success in rifle shooting came with Sgt. McConnell’s announcement that the College had “placed ninth out of 189 teams entered in the 1950-51 Dominion of Canada Rifle Association (D.C.R.A.) indoor shoot, something we have to be proud of here at the College”. 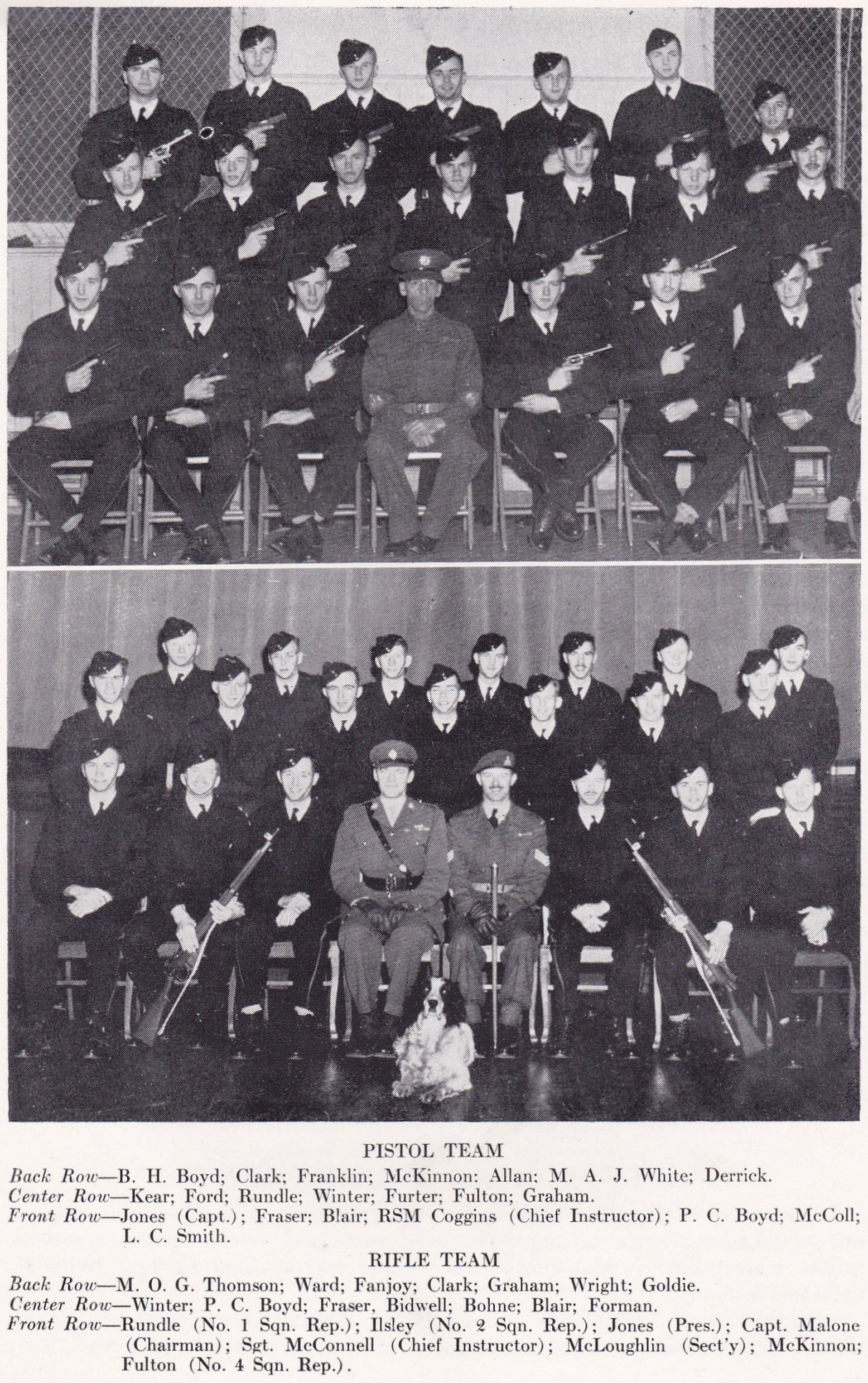 In 1952 a report in January spoke of the very successful “Turkey Shoot 1951” being “the most successful to date with 900 targets being fired, a fusillade that netted the winners a total of 16 turkeys and 22 chickens; Cadets MOG Thompson, Chisholm, Reid, and JG Thompson topped the Winners list followed by Staff members Miss Agnew, Major Hetherington, Miss J. Stagg and Mr. Doucett”.

The RMC Pistol Team, captained by RG “Glenn”Jones, played host to “a team of top RCMP pistol men from ‘A’ Division, Ottawa”.  Ten firers competed for each team with the top five scores counting.  Cadets Jones and Joe Ford led the RMC team.  However, the Mounties impressed everyone present with their skills, winning the competition with ease.  The cadets gained very valuable experience from the visitors.

In mid-February, the RMC Rifle Team paid a visit to the RCMP’s ‘N’ Division in Rockcliffe Park, Ottawa for a competition held in the Justice Building.  Commissioner Nicholson of the RCMP joined the Mounties’ team for the shoot.  Captain Malone commanded the RMC contingent of two rifle teams and Sgt. Fred McConnell served as Coach of the teams.  RMC’s teams competed strongly in this competition against the very skilled RCMP team and came away with a tie, honorary RCMP membership cards, and a high level of respect for the RCMP in all contexts.

Later in February, the RMC Pistol Team travelled to the University of Toronto for a very successful shoot against the Hart House Pistol Club.  The previous RMC had absorbed a defeat at the hands of U of T but this time “shooting new Colt revolvers instead of the old Webleys and with more match experience, RMC came through with a solid win”. The cadet team was again led by Ford and Jones with strong support from cadets Fraser, McColl, and McKinnon and Coach Sgt. Fred McConnell. 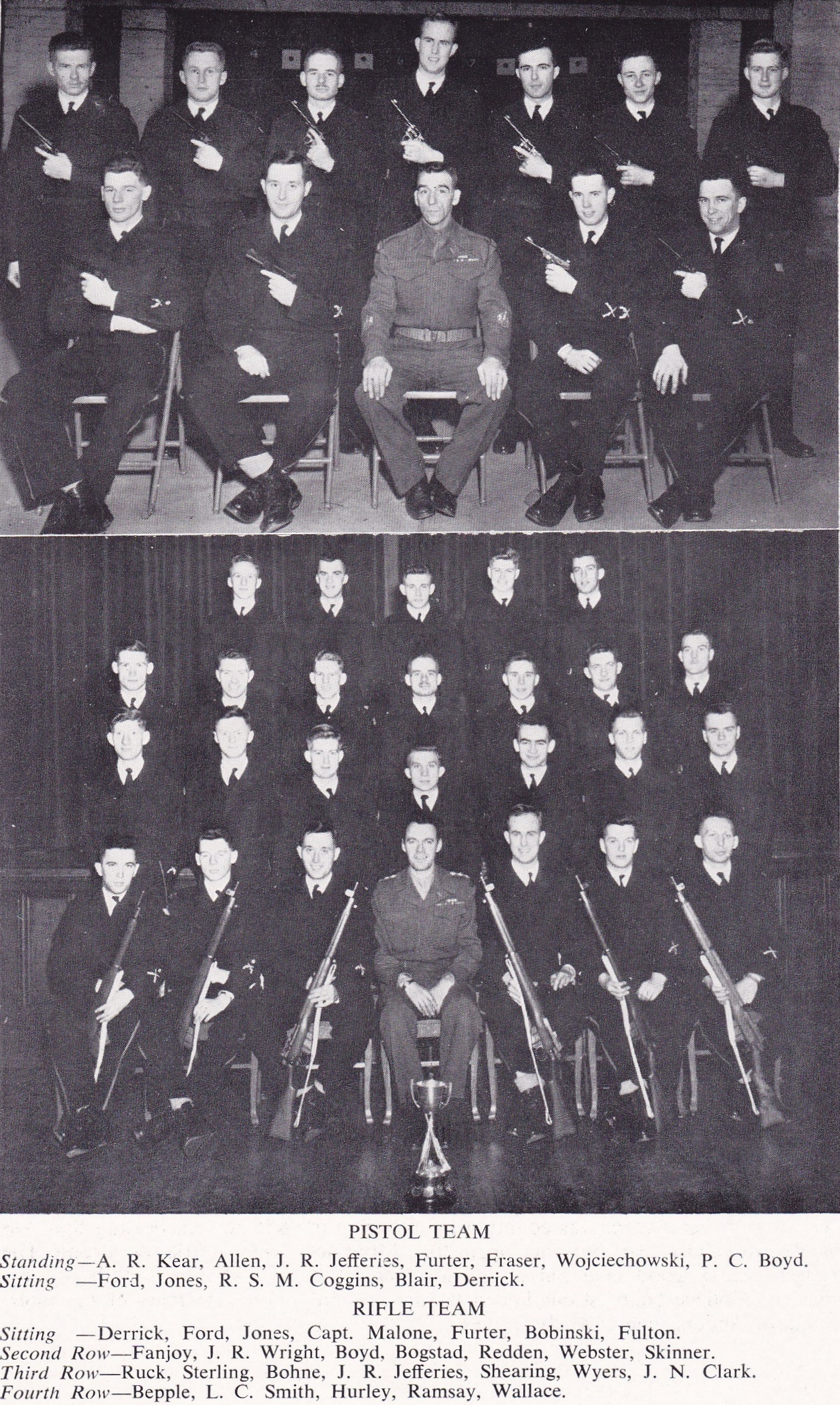 In 1953 RMC again played host to a team of RCMP marksmen in a rifle competition with RMC’s first and second teams coming out on the winning end of a tightly-contested event, 1,914 points to 1,903 out of a possible 2,000 points per side.  Good shooting and another experience-gaining event for our teams.

RMC also played host to the Inter-University Tri-Service Rifle Shoot with seventeen teams involved, including two from RMC and the others from eight universities (Queen’s, McGill, University of Toronto, McMaster, O.A.C. Guelph, University of Montreal,  Western, and Carleton).  Some of the universities had additional teams representing their COTC, UNTD, and URTP programs.

RMC’ First Team, captained by Glenn Jones with the support of Skinner, Furter, Rundell and Bobinski won this competition and the Inter-University Tri-Service Trophy.  George Skinner registered the highest score of all the shooters in this event.  RMC’s Second Team, captained by Al Derrick with the support of Fulton, Redden, Smith and Forman, finished close behind to take second place.

The Pistol Team and the Rifle Team maintained busy schedules reflecting how important these sports had become at RMC.  Both teams came home victorious after a trip to the University of Toronto’s Hart House.  The Rifle Team then travelled to Montreal and registered a win over McGill.   The Pistol Team travelled to Ottawa for another match with the RCMP and managed to do somewhat better than in prior matches against the Mounties but the RCMP continued to dominate these friendly competitions.

In 1954 the RMC rifle teams again won the Inter-University Tri-Service Shoot. Eighteen teams competed, this time, two from RMC and the others from COTC, UNTD, and URTP units from McGill, University of Toronto, Queen’s, Ottawa University, Carleton and Western.  RMC’s First Team of Ed Bobinski, Gerry Beament,  Al Derrick,  George  Skinner and JR Wright placed first in the competition and brought the Inter-University Tri-Service Trophy back to RMC for the second year in succession.  RMC’s Second Team of Hank Bepple,  Garth McDonald, and cadets Rea, Redden and Ramsay finished in Second Place.

The 1953-54 season of the RMC Rifle Club was said to be “one of the most active and most successful in recent years.  The results of the shoots clearly show that the College possesses one of the most competent indoor small bore rifle teams entered in both Service and Collegiate competitions.” The Rifle Team had gone undefeated except for a distance shoot with Royal Military Academy (Sandhurst) using the unfamiliar English style targets.  Good shooting, indeed. 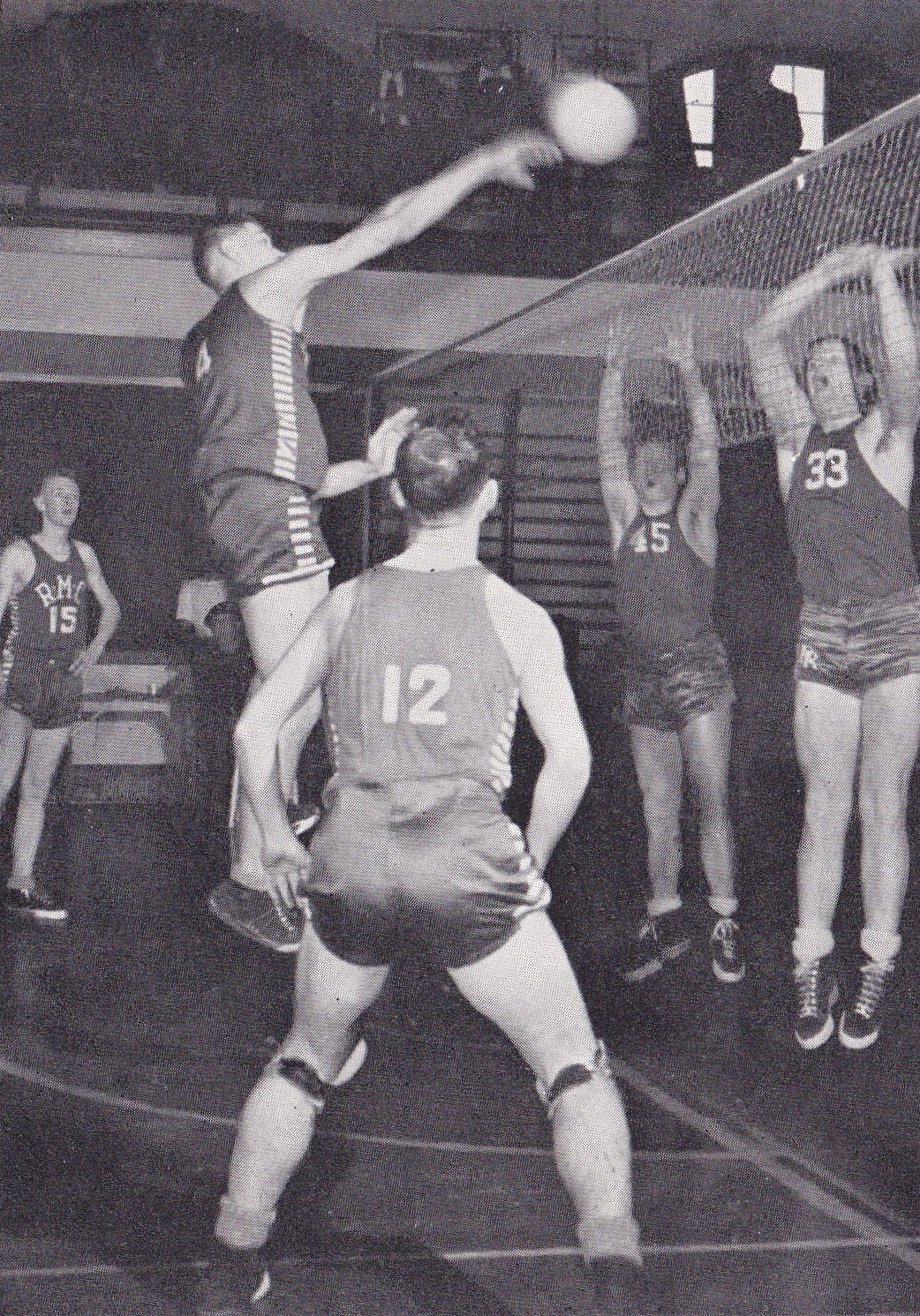 It took time for this sport to become established at RMC in the post-war era.  The team was formed in 1950 and went into the 1951 season with seven hold-overs from the previous season and about the same number of recruits on the team, but still without an organized league in which to play.

The team defeated the station team at RCAF Base Trenton once and the Staff College team three times.  McLaughlin, Wright, Pickering, and Strong were cited for their fine efforts.  The team needed stronger competition and league play somewhere. 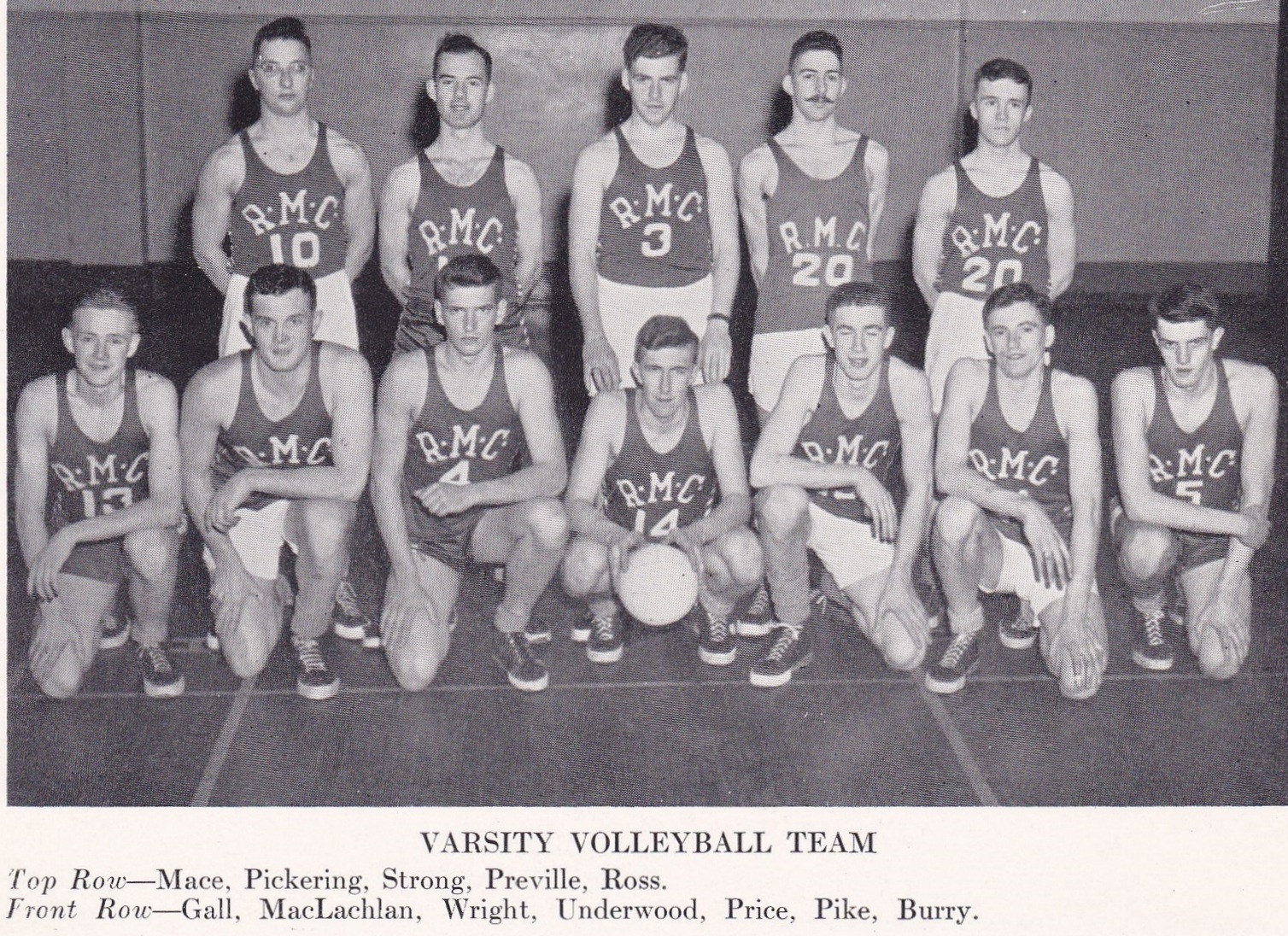 In 1952 the sport was seen as “coming into its own at both the inter-flight and intercollegiate level”. RMC’s Junior Volleyball Team represented the College at the Annual CSC Tournament played this year at Royal Roads.  The volleyball match, the last event of the Tournament was also the event that would determine the winner of the Tournament.  The Royal Roads team prevailed and RR won the Claxton Cup for the first time.

In 1953 the College’s Junior and Senior teams were still searching for leagues that could provide them with confirmed schedules.  The Juniors played against local teams defeating Vimy and Kingston YMCA and losing to the Staff College but this time defeated Royal Roads in the CSC Tournament at RMC.  The Senior Team looked much strong defeating a Queen’s team on Sports Night and in a tournament in Toronto proved their competitiveness playing against two of the strongest teams in the Ontario Intermediate league, Hamilton YMCA and Toronto Kodak.  The RMC exams schedule forced the team to decline an invitation to play in that league’s finals.  It was encouraging to see greater interest in the sport with several dozen players putting in a lot of effort to do the College proud. 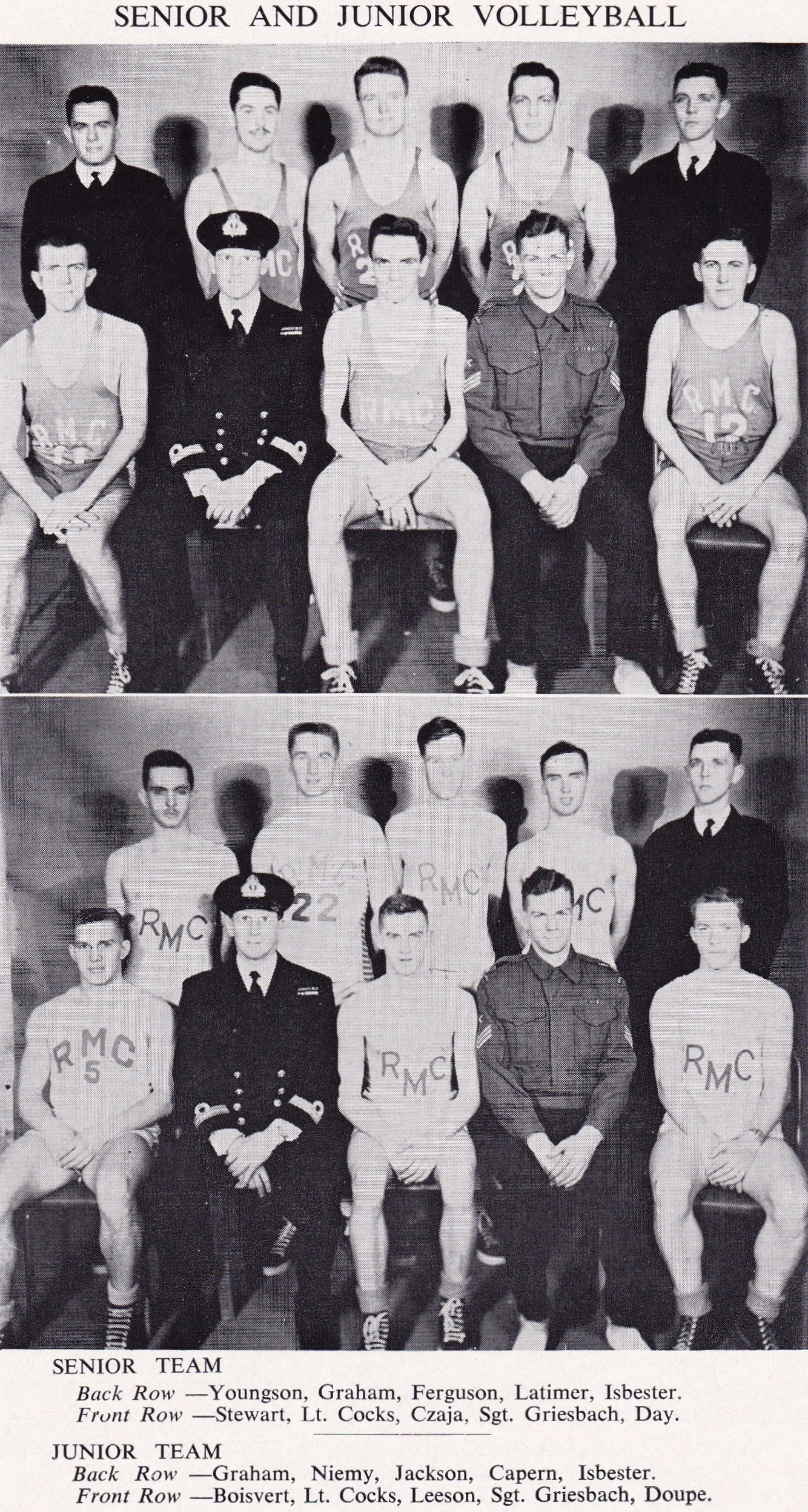 In 1954 volleyball at RMC was seen to finally coming into its own though the teams were still reliant on exhibition games in the absence of leagues in which to play.  The Senior Team, coached by Lt. Cocks and Sgt. Griesbach, played a series of games against “some of the best teams in Southern Ontario and Western Quebec”.  The College team endured defeats but went down fighting playing against tough competition including in games in Ottawa, Montreal, and Toronto.  Opponents included strong teams from the Montreal Estonians, the YMCA’s of Montreal, Ottawa Peterborough, and Kingston, Queen’s, and Sir George Williams.  A tournament at RMC organized and run by Sgt. Griesbach proved to be a highlight of the year.  The team’s final match of the year was in Toronto against Toronto Latvians “the Dominion Champions and rated the fourth best team on the continent.  RMC lost the first game 15-2, but the cadets made it difficult for their opponents to win the second game and the RMC  won the third game 15-11.  “Two more games were played.  Both went over the 15-point mark with each team winning one game.”  Certainly a very creditable performance against such formidable competition.

The Junior Volleyball Team also showed its strength in its impressive win over Royal Roads in this year’s CSC Tournament held at Royal Roads.

Volleyball seemed to finally be well on its way to enjoying good standing as an established sport in the College’s sports program.  Entry in intercollegiate competition was on the horizon. 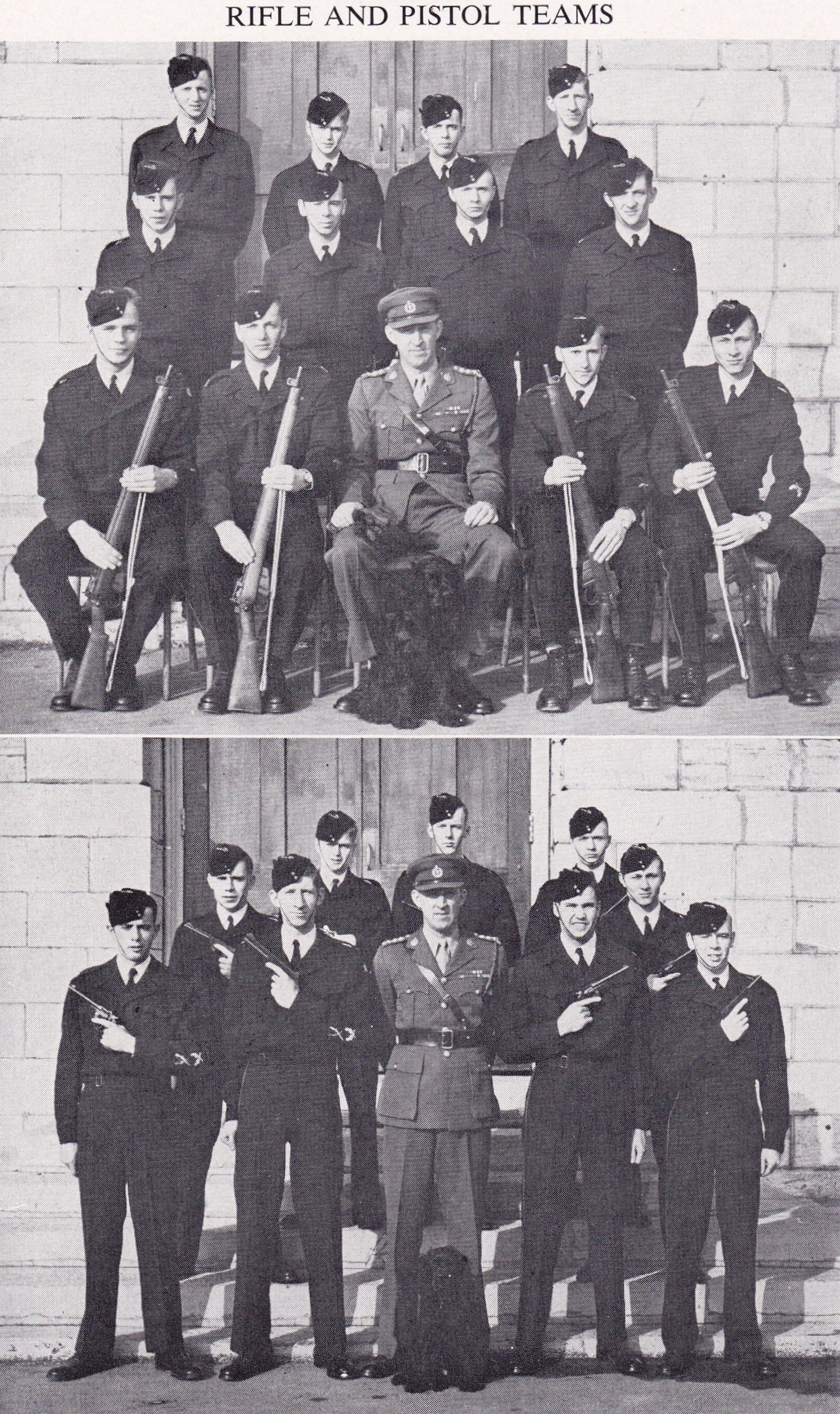 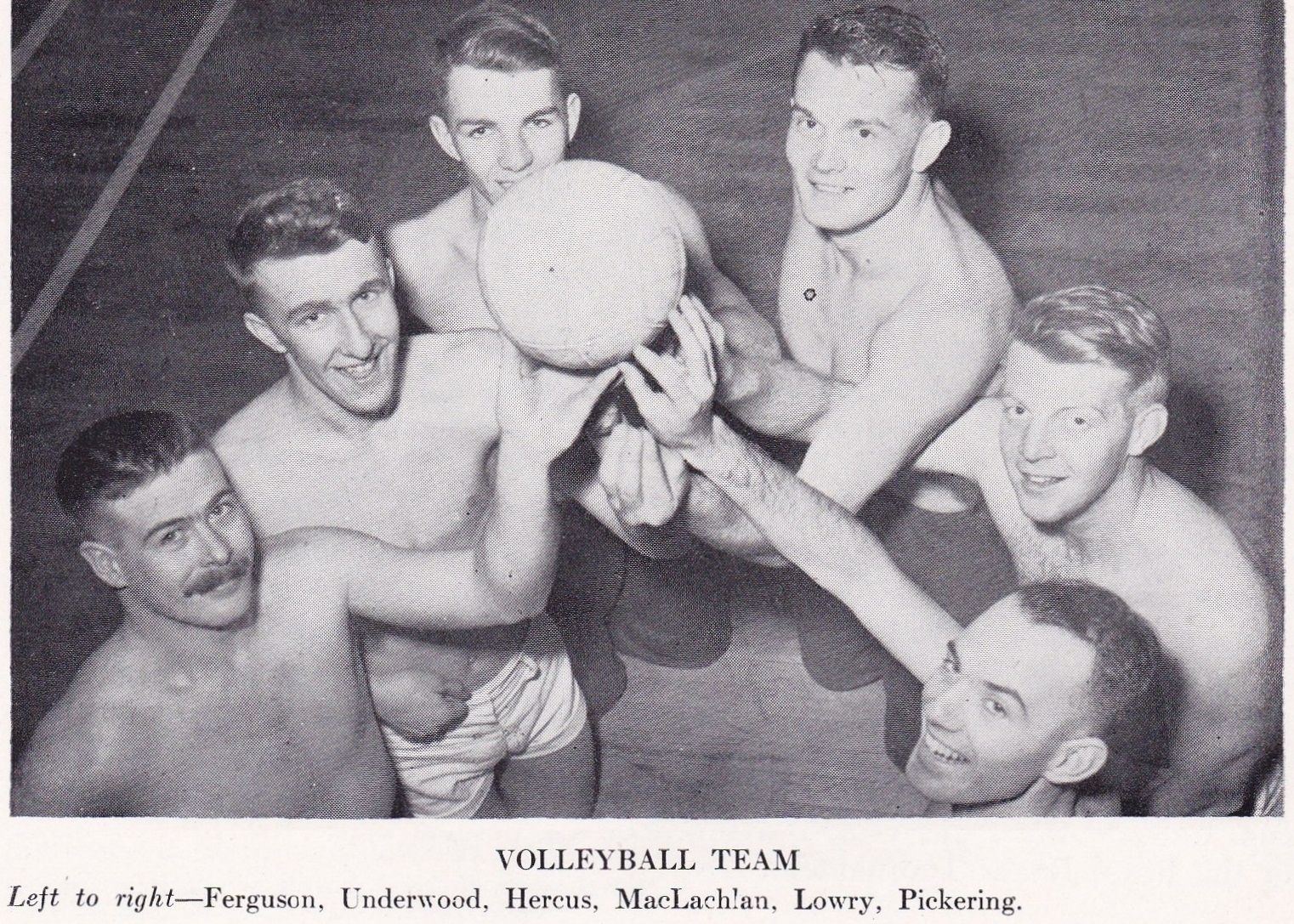