SPORTS AT RMC IN THE POST-WAR ERA #11 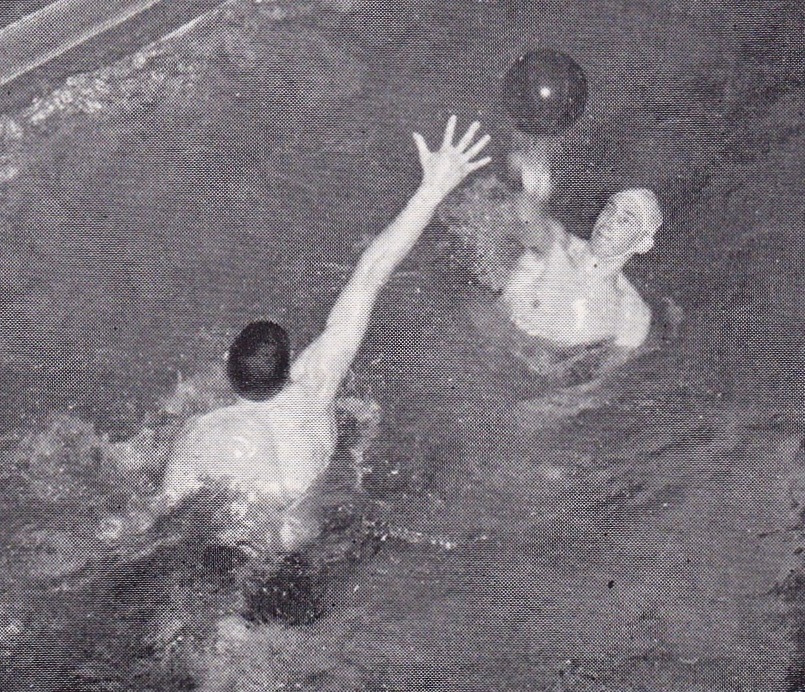 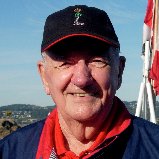 Whether in the business world, or in sports, it is always helpful to have friends one can turn when in need of help, or in need of a swimming pool!  Dr. Preston, who was the driving force in support of the College’s aquatic sports, is credited with introducing Water Polo as a sport at RMC for the first time ever.  Through his efforts the RMC team was able to practice at Queen’s three times each week until RMC’s new pool became available for use late in January, 1951.  It was an uphill battle for the sport in terms of its longevity, an “on again, off again” life span, but the participants certainly gave it their all.

In 1951 RMC’s first water polo team ever played what was an abbreviated game against Queen’s in one of the many events at Opening Night for the College’s new swimming pool.  Queen’s won that short match with John Kormylo and Team Captain Ed Dumalo scoring for RMC.  Other team members, many of them pioneers in this sport, included Dick Day,  Robin Denman,  Mac Whitman,  Ned Mundell,  Barry Holt,  John McDougall,  Jon Jennekens,  Gerry Beament and  Mike Homonko.  The team also travelled to Montreal for an exhibition game against Sir George Williams.  They were not quite ready for this level of competition, losing 9-2.  With only two teams playing at the senior intercollegiate level Water Polo was struggling to stay afloat.   In an effort to develop more interest in the sport, Dr. Preston arranged for an Inter-Squadron Tournament.  This proved to be “different and exciting” for many who gave the sport a try.  It demands superb conditioning, something often credited for making our other teams successful.

In 1952 a larger group of cadets turned out for the team.  The hope of entering a team in the senior intercollegiate league was dashed when two exhibition games against McGill proved that RMC was not ready for this senior-level competition.  The water polo season was limited to the Fall.  In addition to the games against McGill, RMC’s Senior and Junior water polo teams played several games against Queen’s but, lacking sufficient experience, lost all the games, despite outstanding play by Dumalo and Kormylo.

In 1953 RMC’s first game of the season was against the University of Toronto and our cadet team suffered a 10-3 loss.  George Clendinnen led the cadets, scoring twice.  Further news about water polo as a sport at RMC after this point in time is missing.  The sport most likely needed even more support. 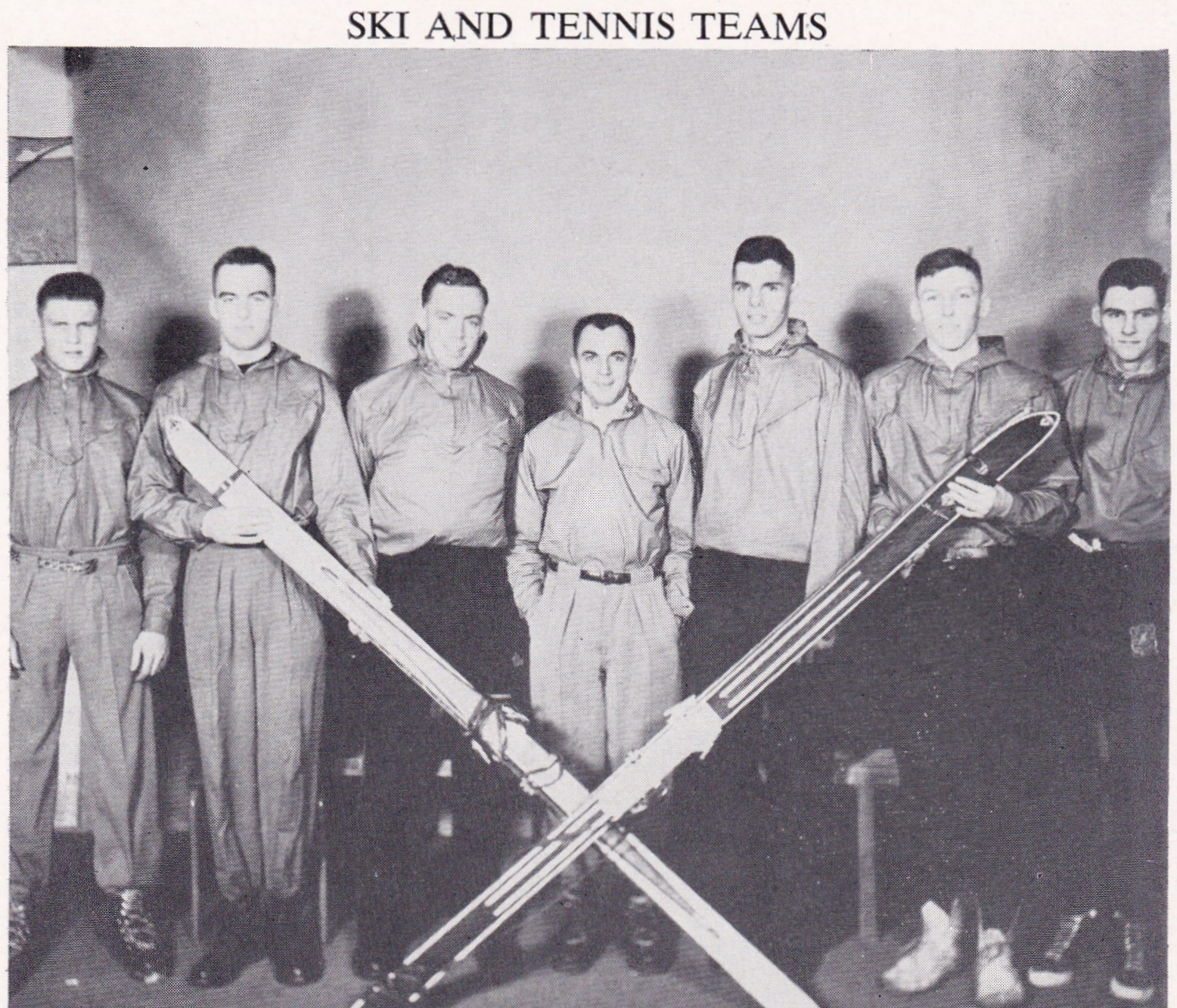 The RMC Ski Club enjoyed significant success as another new post-war era sport at the College.  It is not surprising that Canadians have no trouble adapting to winter sports.

In 1951 the RMC Ski Club was reorganized and made plans for skiing excursions, all with a hope that a “fully-fledged, properly organized college ski team” would be formed.  Meanwhile, cadet skiers enjoyed opportunities to ski at Gananoque, at Camp Fortune in Ottawa and on the Old Fort Henry Hill.   A few cadets participated in a slalom race at Gananoque organized by Queen’s University and KCVI and “although our boys had little practice, they turned in a very creditable showing.”

Thanks to an invitation from the Queen’s Ski Club, six RMC skiers got to compete in the Annual Intercollegiate Ski Meet at Snow Ridge in Turin, NY  as the first-ever  RMC Ski Team.  “RMC placed 11th out of 17 Eastern colleges and universities participating in one of the largest ski meets in the East”.  The RMC Team members for this meet were:  Stirling Ross,  Jacques Pouliot,  Guy Juneau,  Eddie Michaud,  Gordon Forth and Harry Morewood.   Author’s note:  Harry Morewood was just one year ahead of me in Quebec High School and RMC.  He was deservedly credited with doing a very fine job as a founding executive of the RMC Ski Club while also being a very accomplished skier.  Harry’s organizational efforts paved the way for RMC’s Ski Team eventually becoming the Ottawa-St. Lawrence Intercollegiate Conference Skiing Champions in 1955, 1956, and 1957.

In 1952 the Ski Club grew even larger with 50 cadets as members.  An RMC Ski Team was organized with Mr. E. Collins as Coach.  The team practiced at Fort Henry every afternoon and at Gananoque and Camp Fortune on weekends.  RMC placed second in a practice meet at Snow Ridge NY against Queen’s and KCVI.  Next the team did very well in the C.I.A.U. Ski Meet held at St. Sauveur and Montreal against six more-experienced College and University teams.  Mentioned for their fine performances in these meets:  Morewood,  Michaud,  WG “Bert” Ross,  Ralph Keen,  Pete Rochester,  and Graeme Kirby.  Author’s note:  Graeme Kirby was another product of Quebec High School who followed me by just a year at QHS and at RMC.  He would do very well beyond being a fine skier.  Graeme became CWC in his Final Year.  Graeme’s accomplishments later on in life included managing the National Capital Commission, Ottawa. 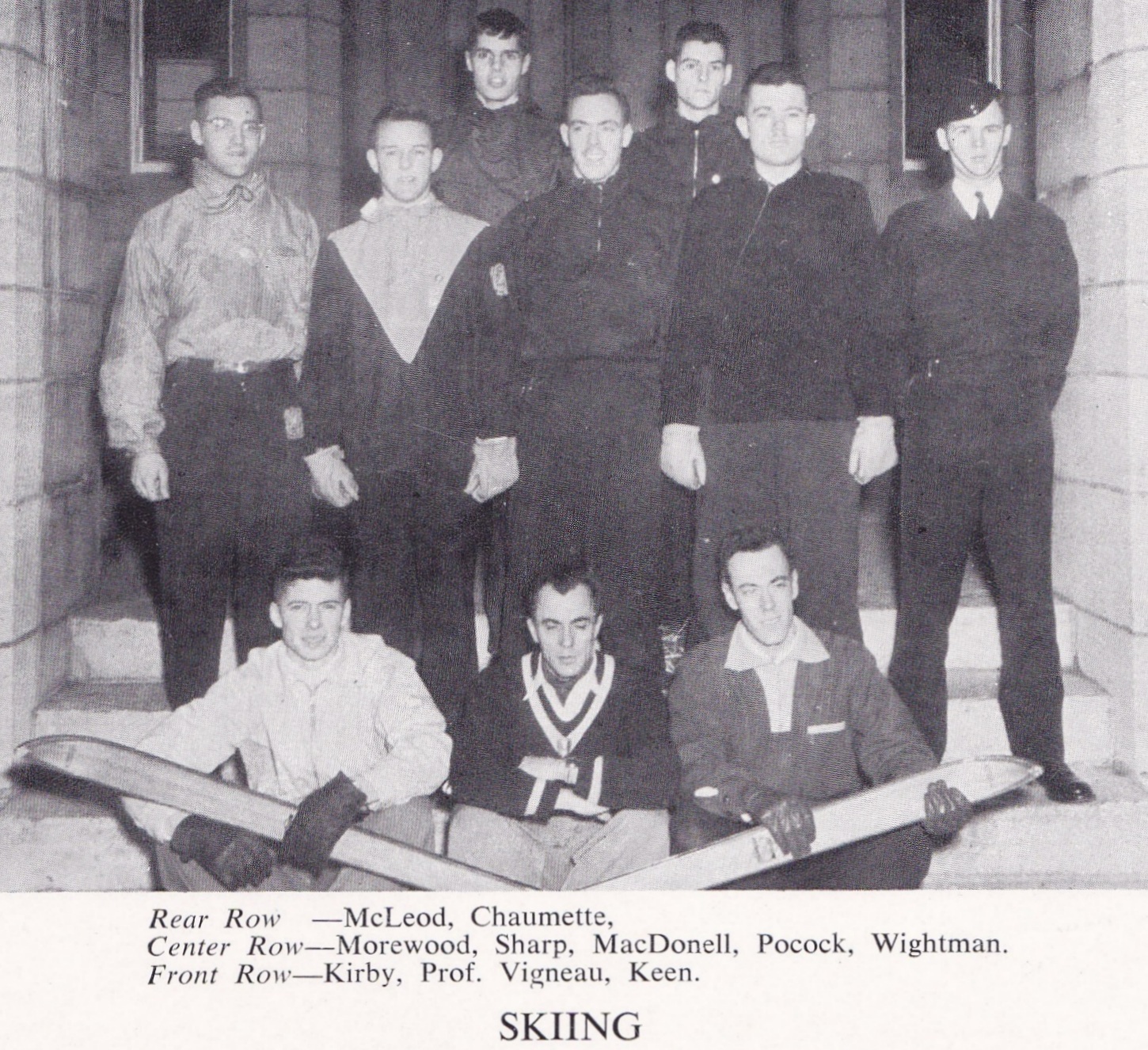 In 1953 poor weather and injuries to some team members resulted in challenges for the Ski Team.   However, the Ski Club continued to grow and organized three trips to Snow Ridge with as many as 70 cadets on some of the trips.  At a meet in Ottawa, with five teams participating, the Ski Team managed to finish third.  In the C.I.A.U. Meet in St. Sauveur and Montreal, skiing against some Olympic skiers on some of the eight teams, the College team finished sixth but came home with some valuable experience.

In 1954 skiing enjoyed increasing popularity once again with more and more novices coming out to enjoy the sport.  The Ski Club organized trips to Ottawa and to Snow Ridge NY but the RMC Ski Team participated in only one meet, the C.I.A.U. Open Meet with six colleges and universities participating.  Laval had victories in all events but one and RMC could manage only a fifth place finish.  “Jumping was our strongest event as Ian MacDonnell earned a bronze medal and Rochester finished in fourth place.”

Our Many Other Sports Activities

Businesses will often venture away from their core activities to bring in other business products that they feel qualified to embrace.  Some such ventures would survive, some would not.  In the post-war era, RMC was willing to give various new-for-RMC sports a try.  Some sports survived.  Some did not.

GYMNASTICS came back to RMC in 1950.  “Before WWII, RMC was known across Canada for its superb gymnastics teams. The College’s annual shows put on at the Montreal Forum and the Royal Winter Fair in Toronto were big drawing cards in these cities.”  Post-war, the intent was to re-build a team that could once again “take its lead in collegiate gymnastics”.  Under the guidance of CSM Grindlay “a good start was made in PT, club swinging, tumbling, high-box and parallel bars  and the team put on a good show at the RMC-Royal Roads Tournament”.   In the 1952-53 year, WO2 Grindlay was joined by Sgt. Griesbach to ready the team for another demonstration at the RMC-Royal Roads Tournament.  The show featured chair tricks, mat work and tumbling, parallel bar tableaus and individual exercises.  The team included  Hank Bepple,  Joe Ford,  Aub Lawrence,  Gord Reade,  Gilbert,  Gagnon,  Zatychec  and others. 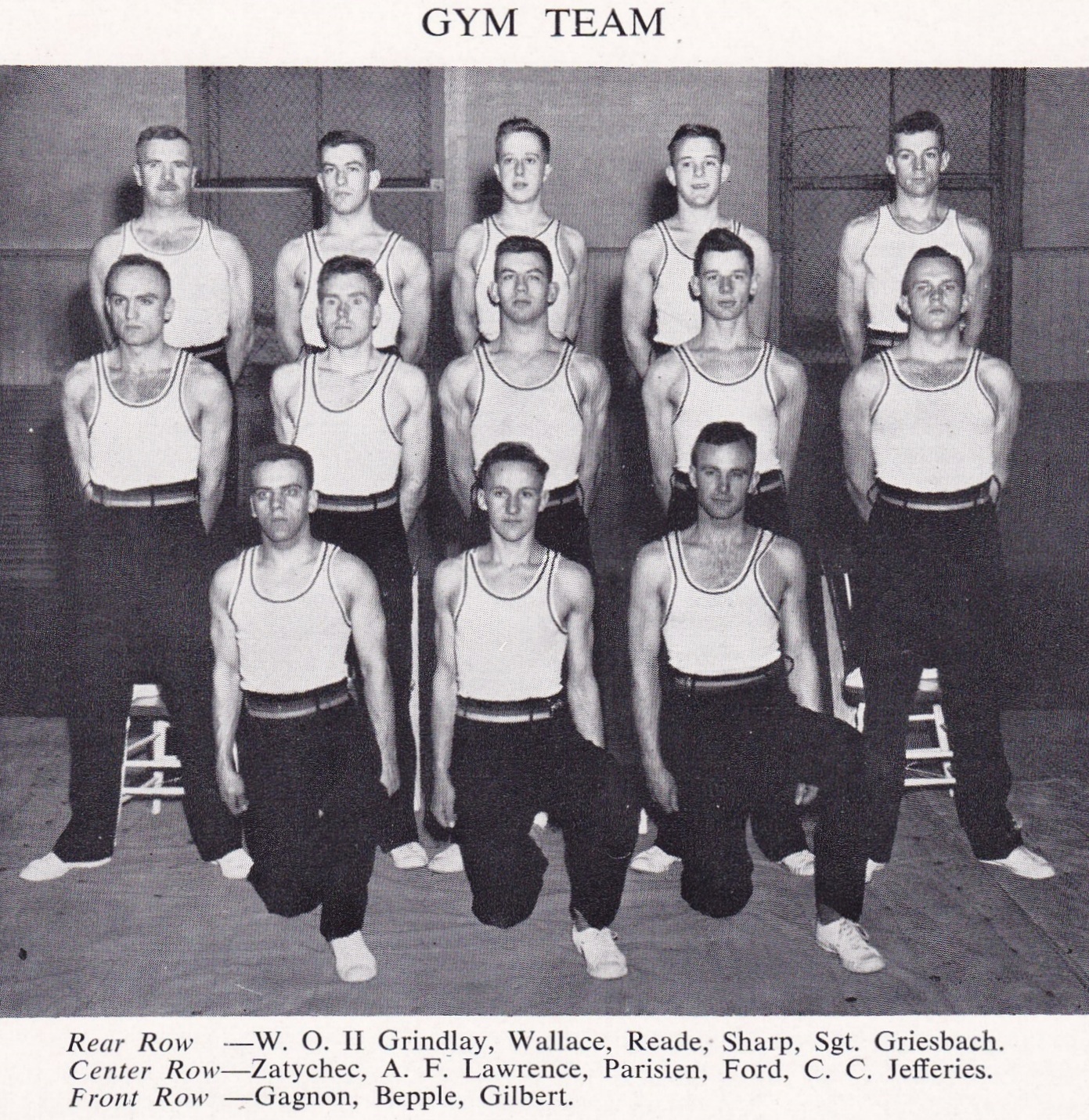 BADMINTON arrived at RMC in 1950 when a Badminton Club was organized under the chairmanship of F/L Bryan.  In an initial competition Club President Bill Wray was the victor, winning “handily”.  The Club had Roger Gravelle as VP and Fred Aldworth as Secretary.  New equipment, including plastic birds, and nets had been purchased, but the provision of sufficient gym time for the program became an issue.

SQUASH RACQUETS had been introduced to the College two years earlier by W/C Jardine who organized  a meet against TCS Port Hope.  The next year a team was entered in the Senior Intercollegiate Squash Meets at the University of Toronto and at McGill.  Our teams were not quite ready for such stiff competition.  More cadets were encouraged to “give squash a try”.

In 1952 the College team hosted a team from the Canadian Army Staff College and on another occasion a team from TCS Port Hope with “Reiffenstein being outstanding for RMC in this match”.  A team also competed at the University of Toronto’s Hart House “with Dave MacPherson winning his match, the first that RMC had ever won in intercollegiate squash competition”.

In 1953 the RMC Squash Team had a home-and-home series against the highly-talented TCS Port Hope team with MacPherson and Wray registering RMC’s only victories.  Squash Racquets struggled to maintain sufficient interest, at least at this stage of its life at RMC.

GOLF enjoyed a brief life at RMC in 1951 thanks to the enthusiastic support of Dr. Hutchison, “a 2-handicap golfer from St. Andrews in Scotland”.  A team of cadets practiced on weekends at Gananoque and in October got to play in the Senior Intercollegiate Golf Tournament at the Cataraqui Golf Club in Kingston.  With the Royal Visit being on the same day, RSM Coggins deemed star RMC golfer Cadet Frank Underwood vital to the Parade’s success that day, so Frank did not get to golf, but Bill Wray, Chuck Bigelow, Dave Hargraft and Ben Young did, finishing sixth out of the seven teams involved.

CURLING came to RMC in 1953 when Ken MacMillan was able arrange for ice time at the Kingston Curling Club.  Two Roadents who had arrived from RR, Ken Perry and Ed Czaja, were among the enthusiasts who did their best to promote the game and get curling up-and-running at RMC.  Twelve teams/rinks, 48 cadets, enjoyed this first year of curling.  The hope was that in future RMC could have teams participate in local bonspiels or have opportunities to play against Queen’s, McGill, or U of T.

“In 1954, under the masterful guidance of Ed Czaja and Terry Pocock curling enjoyed even greater success.”  More cadets participated and the Kingston Curling Club provided more ice time for RMC’s use, all of which time was used for internal competition.  RMC Curling Teams were yet to be established.

FENCING came back to RMC in 1954 with the formation of a College Fencing Club and the acquisition of a “substantial supply of fencing equipment”.  In the Fall, 30 enthusiastic cadets put the equipment to good use in French foil exercises and 10 cadets continued into the Winter for further instruction in fencing by CFL Ken Perry and Cadet DEW Bucher.  “In February an exhibition in tournament fencing was given during a sports night at RMC.  Cadets Albrecht and Carlson fenced foil and CFL Perry and Cadet Bucher fenced sabre.”  Time did not permit sending a team to CMR.  The hope was to do so “next year”. 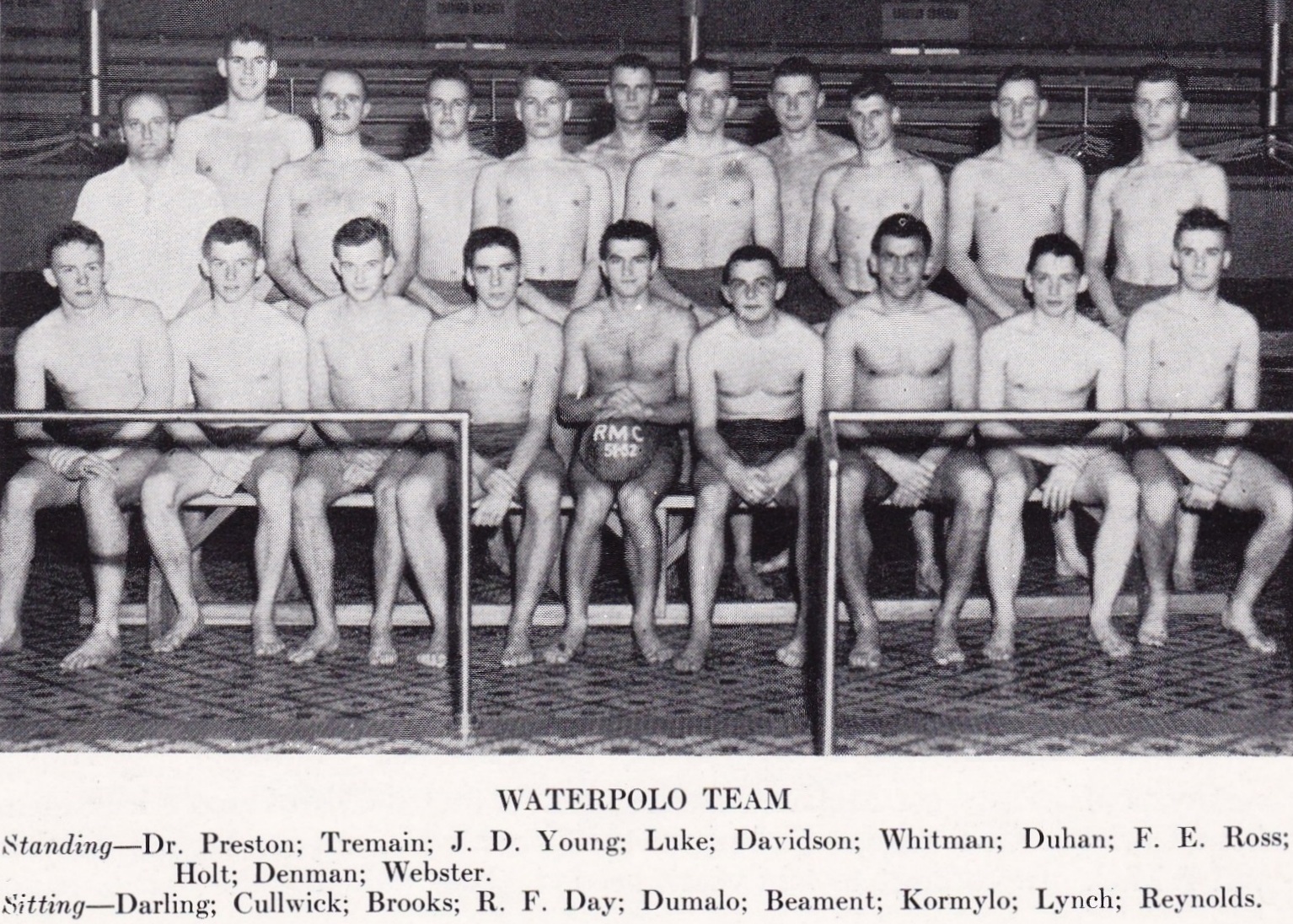 Coming next:   INTRAMURAL AND OTHER SPORTS, AWARDS & TROPHIES, LIVES AFTER SPORTS AT RMC 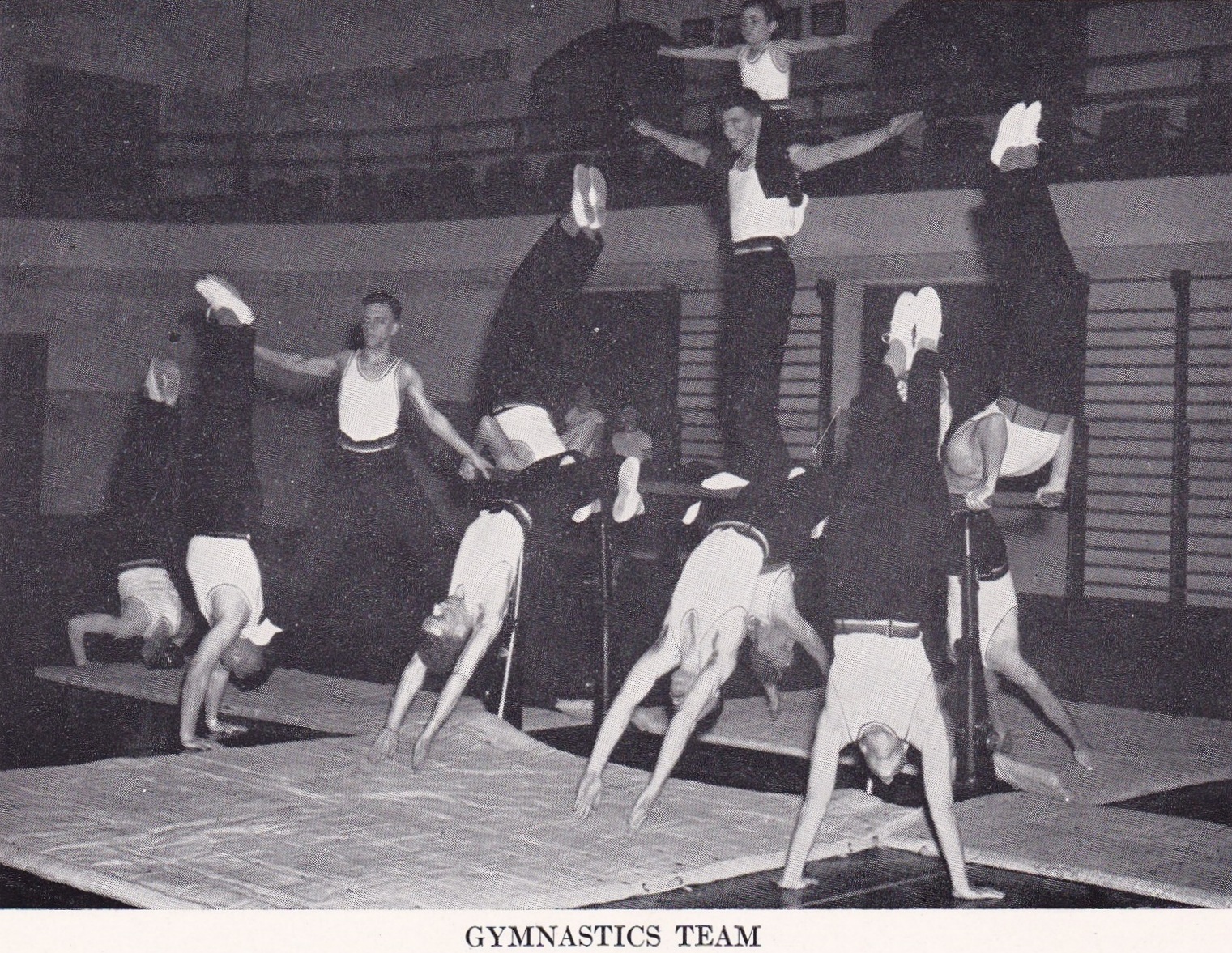