Good management practice in the military and in the business sector requires succession planning particularly, but not only, in family businesses.  This requirement exists likewise in sports.  At RMC the need for “reserves and reinforcements” is to some extent better defined than the need in the business world.  Graduation happens!   Every year, though it did not happen until the fourth year of the Post-War era that began in 1948. 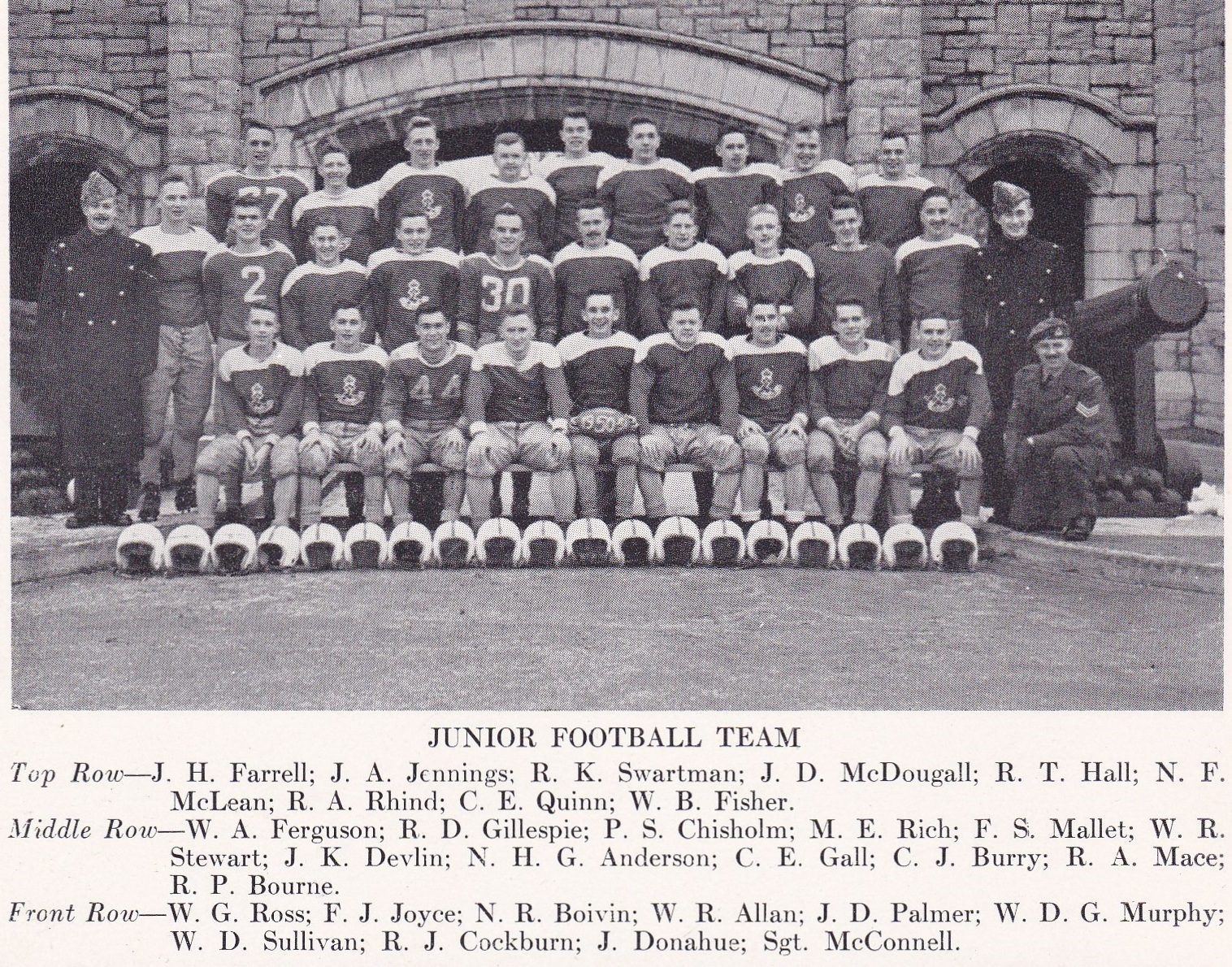 2899 William “Bill’ Ferguson (RMC’52), is credited with establishing a Junior Football Team at the College.  An unfortunate injury to one leg ended Bill’s playing career and he subsequently devoted his time and energy to providing an opportunity for other cadets to enjoy the game.  2853 Robin Bourne (RMC’52) and 2857 Murray “M.O.G.” Thompson (RMC’52) partnered with Bill on the task of actually building a team that would serve to provide the reserves and reinforcements for the Varsity squad.

With Sgt. Fred McConnell having been enlisted as Coach, the Junior Team enjoyed its first season in the Fall of 1950.  With quite a few of the players just out of high school and with no league yet available to join, the competition available for play was limited but strong enough to enable skills to be honed and experience to be gained.  The team won all four of its games against Gananoque High, Deseronto High, and two games against Regiopolis College, Kingston.

Junior Football would indeed provide players for the Varsity Team as early as the following season, the Fall of 1951, including  3089 William “Bert” Ross (RMC’53) and 3240 Dave Palmer (RMC’54) and the team’s designation was changed to Football RMC II.  The team would now play against tougher competition to prove itself ready for re-entry into an Intercollegiate league.  This season RMC II playing at home team defeated RCEME School and Ashbury College and tied Queen’s II.  Playing away the squad lost at Ashbury College in Ottawa, tied Ridley College in St. Catherine’s and tied Queen’s II at Queen’s. 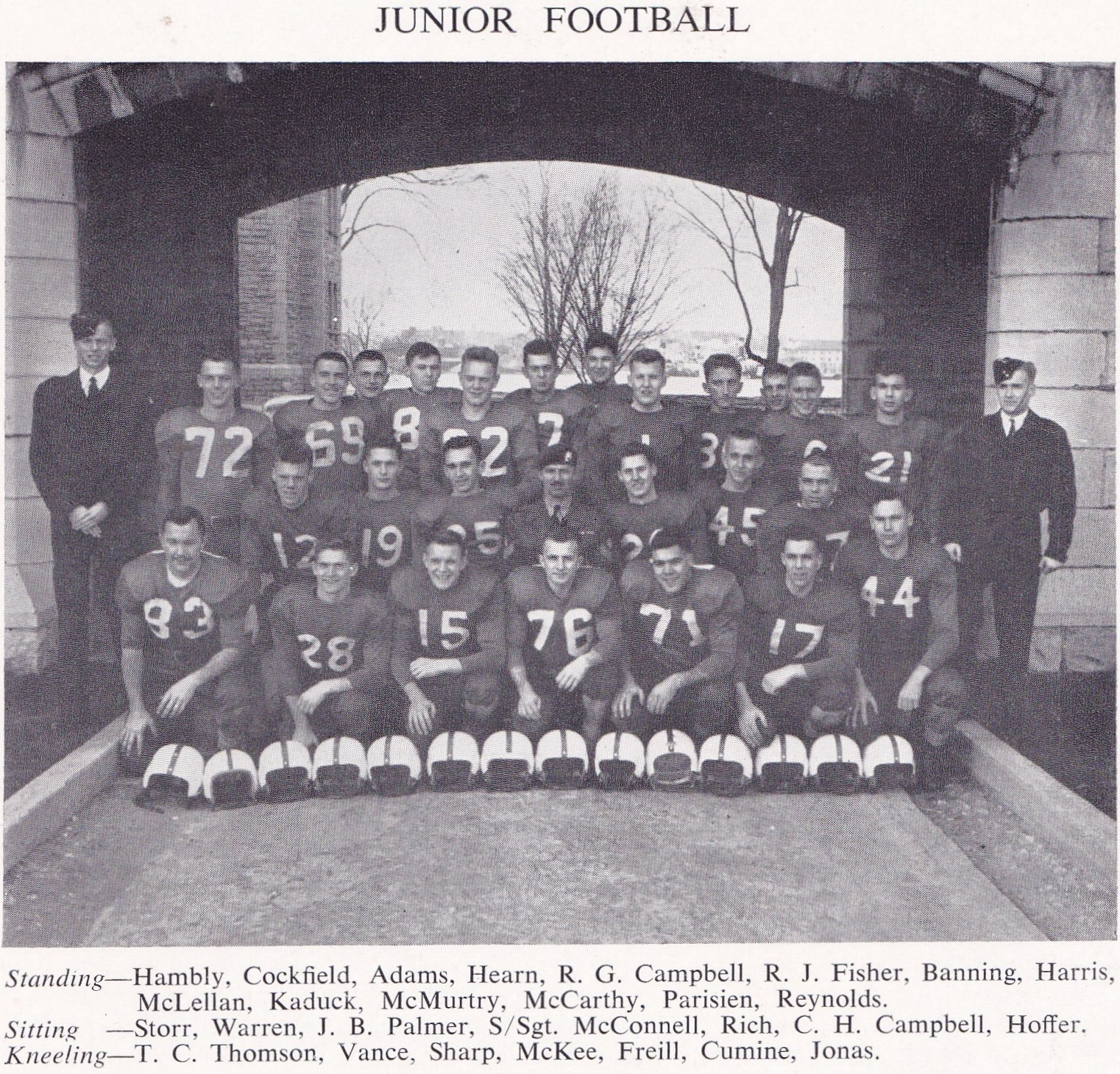 The 1952 season would see RMC II still looking for a league in which to play. The college leagues were undergoing structural changes at the time. The team settled for playing a few exhibition games, defeating Bishop’s College and Ashbury College and losing to Ridley College.

RMC II found a home for the 1953 season as a charter member of the Ottawa-St. Lawrence Intermediate “B” Football Conference.  RMC II played six league games this season, winning twice over St. Pat’s College of Ottawa, twice over Bishop’s College of Lennoxville PQ, and losing twice to C.M.R.

In an exhibition game, Queen’s II proved to be more than RMC could handle.  Interesting that the game against Bishop’s at RMC on November 7, 1953, was played in zero (F) weather and a driving blizzard.

Notably, the final league standings had RMC in first place and CMR in second.  The League was not fully established as to schedules but this was, at least, clear evidence that the succession planning strategy was now firmly in place for the RMC Football Program. 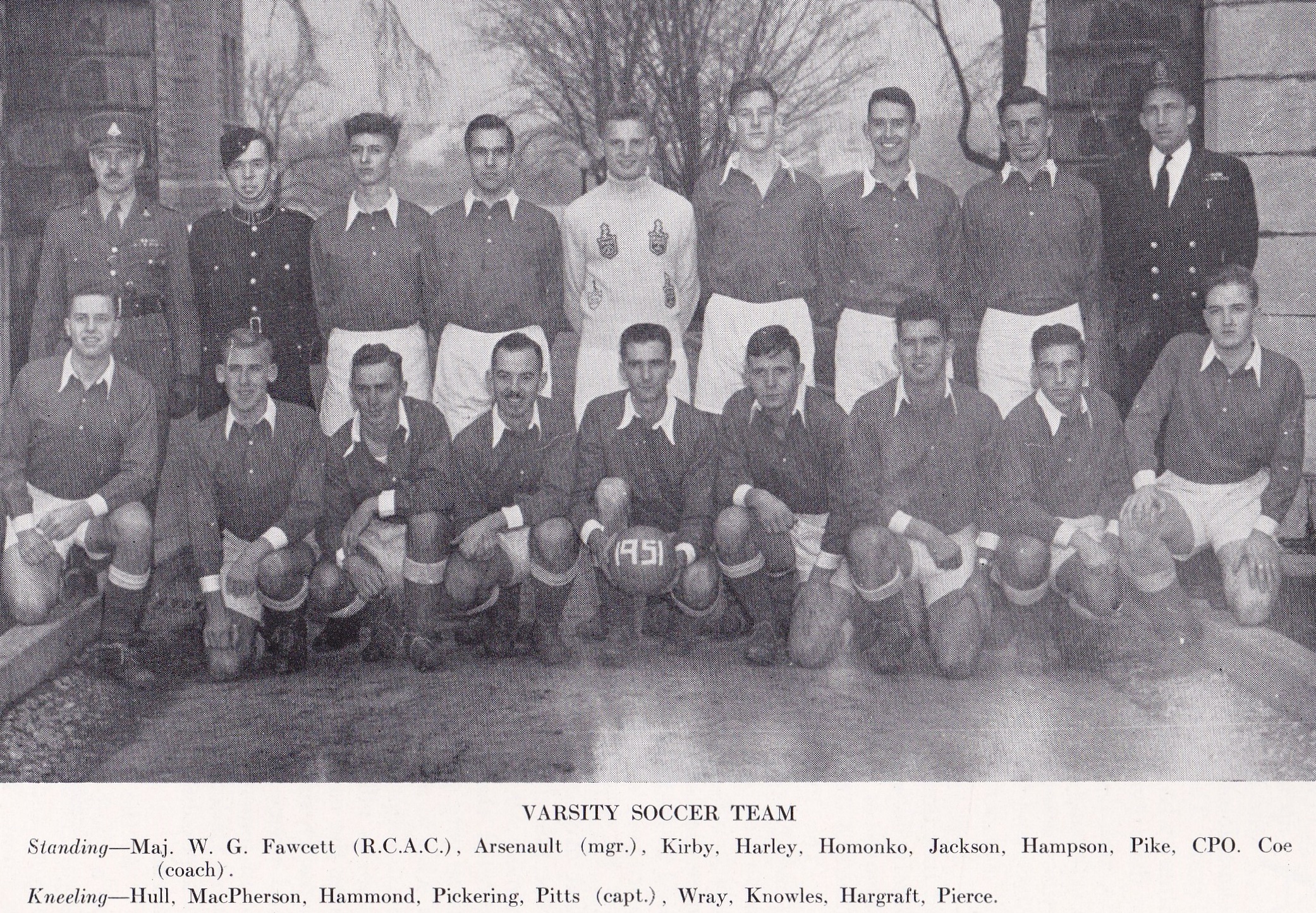 The Beautiful Game found its way to RMC and to Royal Roads from the moment cadets arrived at these Colleges in 1948.  Though Canada was, and still is, very much a “hockey nation”, there was no shortage of quite-talented soccer players entering the Colleges.  Furthermore, for some reason, future leaders of the Cadet Wing and of the military and other sectors played soccer.  Clearly, soccer must be given some significant measure of credit for building leaders.

The RMC Varsity Soccer Team had to be built up to intercollegiate competitiveness just like all other teams at RMC.  IN 1950 the cadets arriving at RMC from Royal Roads for their final two years were welcome reinforcements for the soccer team just as some of their classmates were for the football team.   Coach “Chief” Coe was especially pleased to welcome Class of ’52 Roadents H2897 Herb Pitts, 2906 Ralph Knowles, 2837 Pete Harley, 2932 Garry Hammond and 2829 Guy Arsenault.

In the 1950 season, bolstered by these new arrivals, the team excelled in terms of effort and spirit against tough competition, played well, but nevertheless lost twice to the University of Toronto, twice to McGill University, and twice to Kingston United.  The team’s single victory came against Vimy Army at the end of the season in a tournament for the Kingston Whig-Standard Trophy, won by Kingston United.

The 1951 season saw the team playing at the Senior Intercollegiate level in competition that involved home-and-home games against McGill and the University of Toronto.  Again, no wins, but all really good efforts.  Every game except one was lost by a single goal.  The Varsity soccer squad was punching above its weight and doing well. 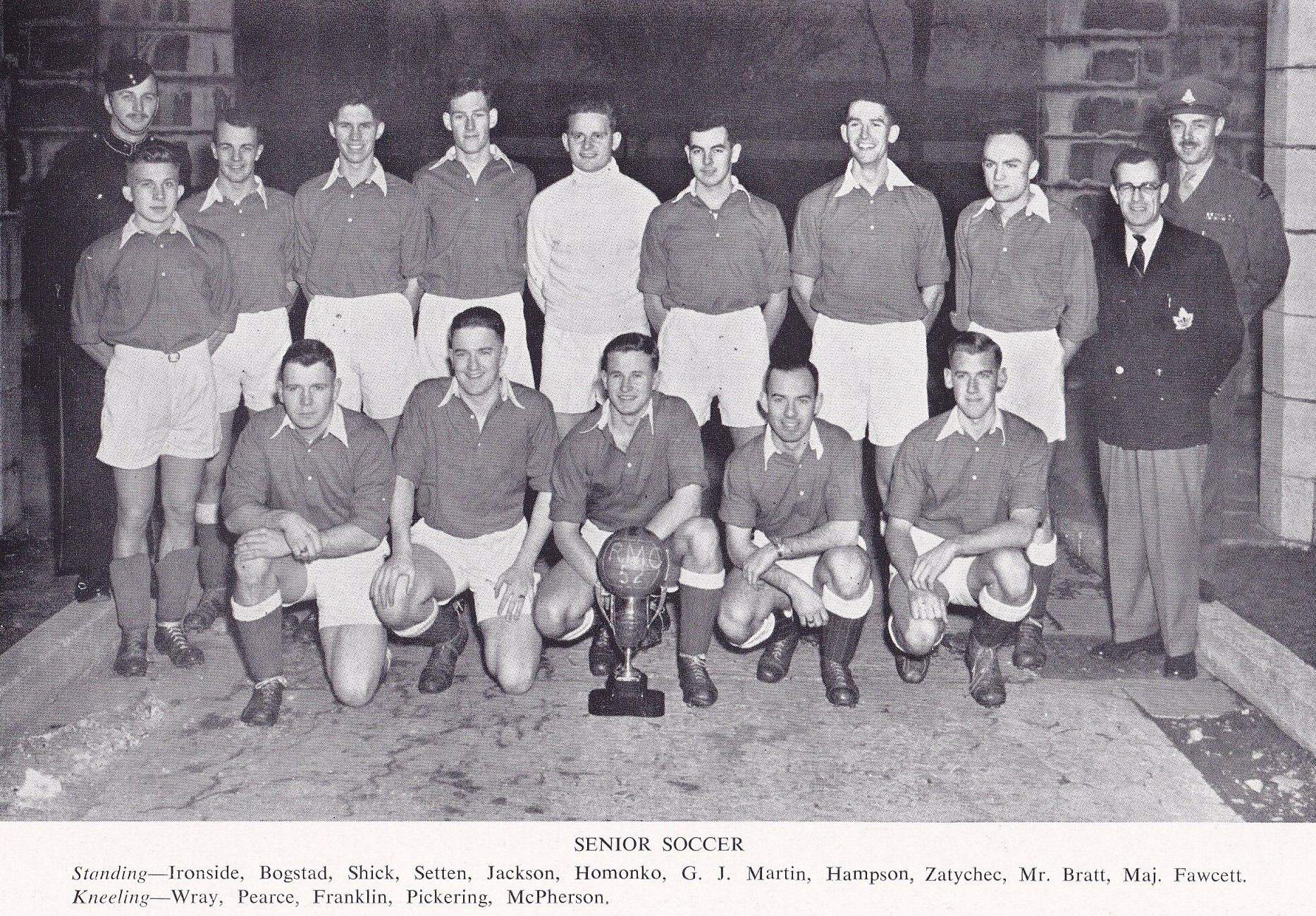 The team lost a number of fine players when the Class of ’52 graduated in the Spring of 1952, leading to the need for major changes to the Varsity squad.  Once again in 1952, despite good effort, the Varsity “Blues” and the McGill Redmen would prevail.  Some limited satisfaction would come in exhibition games.  The team lost to the Senior League Champions O.A.C. Guelph by only one goal but would this time win the Kingston Whig-Standard Trophy, defeating a very strong Kingston United eleven.

More significant success would finally come in the 1953 season.  The Varsity Soccer team, the only RMC team playing in regular Senior Intercollegiate competition, tied with the University of Toronto “Blues” for the Senior Intercollegiate Soccer Championship.  In previous years the RMC teams had always earned the respect of the teams they played, but victories were absent.  In the first League game of the season RMC defeated McGill 4-3 for the first victory in League play for RMC since 1938. This season, success, finally, after so much good effort by so many for so long. 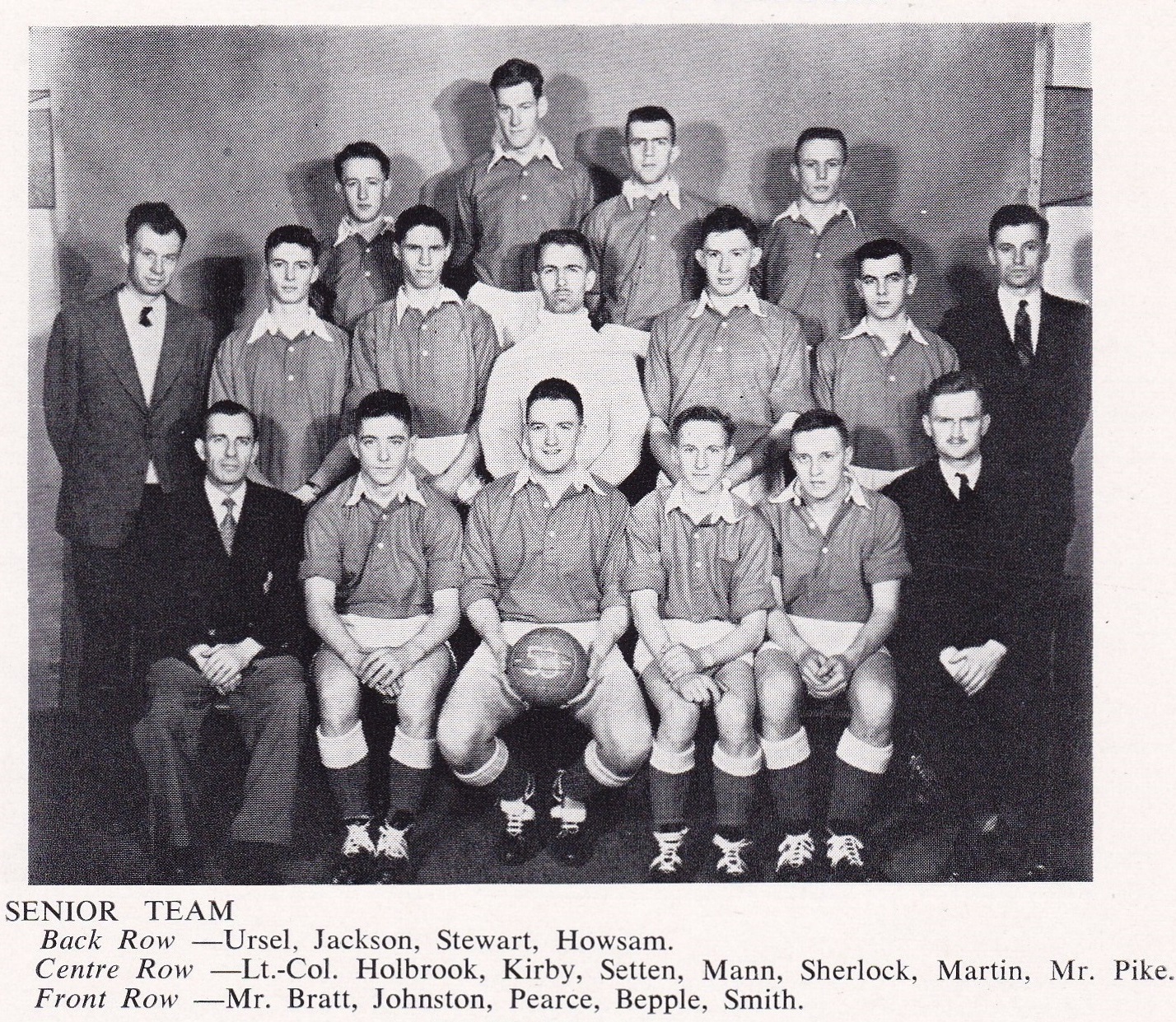 A brief look at a few of the many and who they would become after their contributions to RMC Soccer:

Lieutenant Herbert C. Pitts had trained with the Royal Canadian Armoured Corps but upon his arrival in Korea shortly after Graduation he was astonished to be assigned instead to be a Platoon Commander with the 3rd Battalion, Princess Patricia’s Canadian Light Infantry P.P.C.L.I.).  Not a problem for Herb.  He carried on and within a rather short period of time was awarded a Military Cross for his leadership and bravery in action.  The citation recorded that Lieutenant Pitts had trained a special wiring party and then led that party of 32 all ranks to lay concertina wire near an old Korean minefield, dangerously close to enemy forces.  Though two of his men were killed by a mine the first night, Lieutenant Pitts led the party into danger again and “completed the wiring task expeditiously and efficiently”.  The citation also stated that “throughout his service with the PPCLI, Lieutenant Pitts, by his coolness, devotion to duty, and leadership of a high order, maintained perfect control during many difficult tasks.”

Herb Pitts served in many command positions through a distinguished military career until his retirement in 1978.  Following retirement he served as Colonel of the Regiment, the Canadian Airborne Regiment and the Princess Patricia’s Canadian Light Infantry.  He was Colonel Commandant of the Canadian Infantry Corps and Honorary-Lieutenant Colonel of The Queen’s Own Rifles of Canada.  Herb’s accumulated service in uniform extended for more than 44 years.  He also served as National Commissioner of Scouts Canada.

In September 1984, Major General Pitts was awarded an Honourary Degree, Doctor of Military Science by RMC.   He has been awarded many honours and awards since retirement.  He and his wife are now resident in Victoria, B.C.  Has there ever been a nicer man and finer leader than Herb Pitts?

Not all graduates of RMC pursued careers in the military or in the business world.  Some became scientists, researchers, and educators, including some of the athletes who played on the College soccer teams.

H2859 Dr. John (”Jack”) Pike, RMC’52, played Varsity Soccer in the 1951 and 1952 seasons and after Graduation gave of his time to coach soccer, including coaching the Junior Soccer Team in the 1953 season.    Jack spent a great many years on Faculty at the College, retiring as Professor Emeritus, Department of Mechanical and Aerospace Engineering.  Jack was the recipient of an Honourary Degree, Doctor of Engineering, awarded to him by RMC in May, 2003.

3235 Dr. Ronald (“Ron”) Mann, RMC’54, played on the Junior Soccer Team as goalie for three seasons (1950-52) and moved up to goal for the Senior Team in the 1953 season.  In his final year at the College (1953-54) Ron served as Cadet Wing Second-in-Command.  Following Graduation, Ron was commissioned as an artillery officer, serving in Germany, Korea, the U.S. and Canada as a regimental officer and, finally, as an I.G. (Instructor in Gunnery) at one of the Schools of Artillery.  Following further studies at Queen’s, Ron spent over 40 years associated with RMC as an educator, engineer, scientist, administrator, researcher, and consultant within DND, retiring as Professor Emeritus, Department of Chemistry and Chemical Engineering. 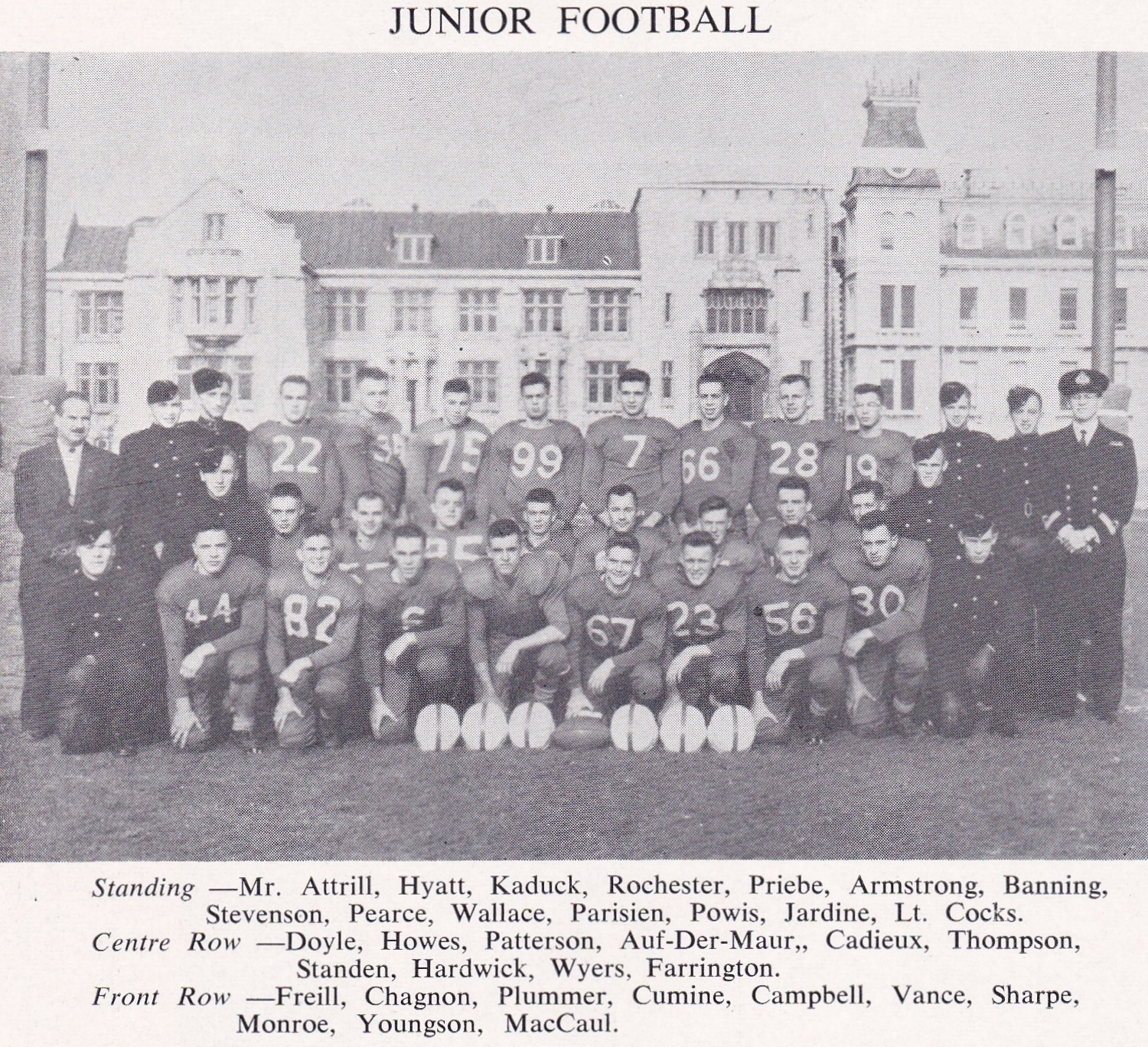