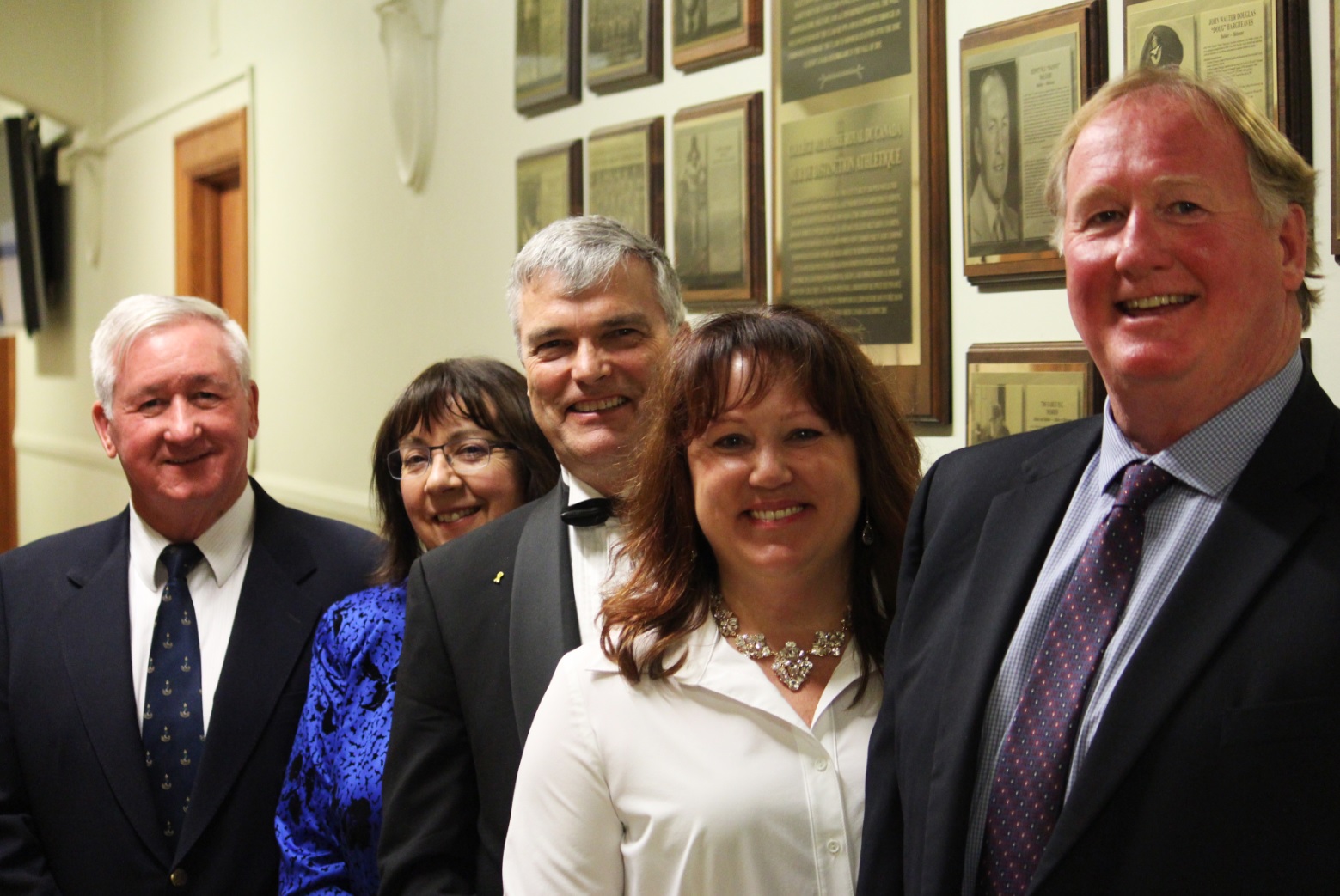 At the tail end of the varsity awards banquet, the 2019 Induction Class onto the RMC Athletics Wall of Distinction were presented with their plaques and given an opportunity to speak to the current athletes.

The first inductee mentioned was the legendary RMC hockey player Steve Molaski. Due to a civilian position in Kuwait, Molaski was unable to attend this year’s ceremony, but plans to return for 2020, when he will be the keynote speaker.

Doug Smith, a former football player at RMC who went on to have an impressive coaching career, was inducted as an athlete/builder. He told stories of being coached by, and coaching with, another AWOD inductee: Doug Hargreaves.

Alan Markewicz, whose international pistol shooting endeavors were came to the forefront in his nomination, reflected back on his fencing days. A letterman fencer, he put in two years at Royal Roads and two years at RMC, learning so much during his time at the military colleges that he continued to fence at an elite level into his CAF career, including the chance to compete at high-level tournaments in the UK.

Nathalie Birgentzlen was the final inductee and keynote speaker. She started by acknowledging a fellow Taekwondo star in the room: Karine Chayer. The two women trained with and competed against each other in their days at the College. Birgentzlen went on to thank the trailblazers that came before her, both at the College and throughout her athletic career, all of whom made it possible for her to achieve her immense success.

Rusu was named an OUA East First Team All-Star for her tremendous play as the Paladins keeper, making a league-leading 135 saves this year. Also named RMC’s top third year athlete, Rusu stopped all three penalty kicks she faced during the 2018-19 season en route to sharing the honour of the Kelly Gawne Memorial Cup.

Stephan was an OUA East First Team All-Star for the second consecutive season, ending her fourth year with the Paladins as the program’s all-time leader in points (991), kills (806), and aces (131). Also named the top fourth year athlete at RMC for 2018-19, Stephan was consistently among the OUA top five in points per set, kills per set, and digs per set. Stephan was also the Kelly Gawne Memorial Cup recipient last year.

Towe claimed the Tommy Smart Cup and title of RMC’s Male Athlete of the Year as an OUA East Second Team All-Star for the third year in a row. With 885.5 points and 773 kills, Towe set program records in both categories with one year of eligibility remaining. After being chosen as the captain of his team for three consecutive seasons, Towe was named the top team captain for 2018-19.

Every year since 1912, the top all round graduating varsity athlete at RMC earns the HRH Prince of Wales Cup for excelling in athletics as well as all four pillars at the College (Military, Academics, Bilingualism, and Physical Fitness) during their four years. The 2018-19 recipient is David Savery (Angus, Ont.) of the men’s hockey team, who was the team captain and a top defenceman for the Paladins in his fourth year. Training to be a pilot, Savery has been an exemplary cadet, even representing Canada this year at the Annual International Cadets’ Conference in Japan. In addition to his time spent on hockey and his military duties, Savery has excelled in his Honours Economics & Business Administration courses and passed his bilingual requirement.

Joining Towe from men’s volleyball, Travis Verbeek (Smithers, B.C.) earned the Matthew Dawe Memorial Cup, which is awarded annually to an outstanding ROTP varsity athlete, in any year, who excels in all aspects of College life.

This year, RMC also handed out two Outstanding Athlete Awards, which are given out on a case-by-case basis for exceptional performances at the provincial, national, or international level during the current academic year. For making Canada’s U20 rugby team and competing with them in Europe, Glenn Butler (Grimsby, Ont.) of the men’s rugby team earned of the awards for 2018-19 in addition to top first year honours. Garrett Whelan (Grandora, Sask.) of the fencing team also earned one of the awards for winning silver in men’s senior sabre at the 2019 Ontario Fencing Association provincial championships.

After winning the 2019 Carr-Harris Cup, Savery’s men’s hockey team won the RMC Team of the Year Award for the second consecutive year. Second-year forward Cameron Lamport (Newmarket, Ont.), who ended the year on a 10-game point-streak, was named the top second year.

The complete list of 2018-19 RMC Varsity Award Winners can be found below: 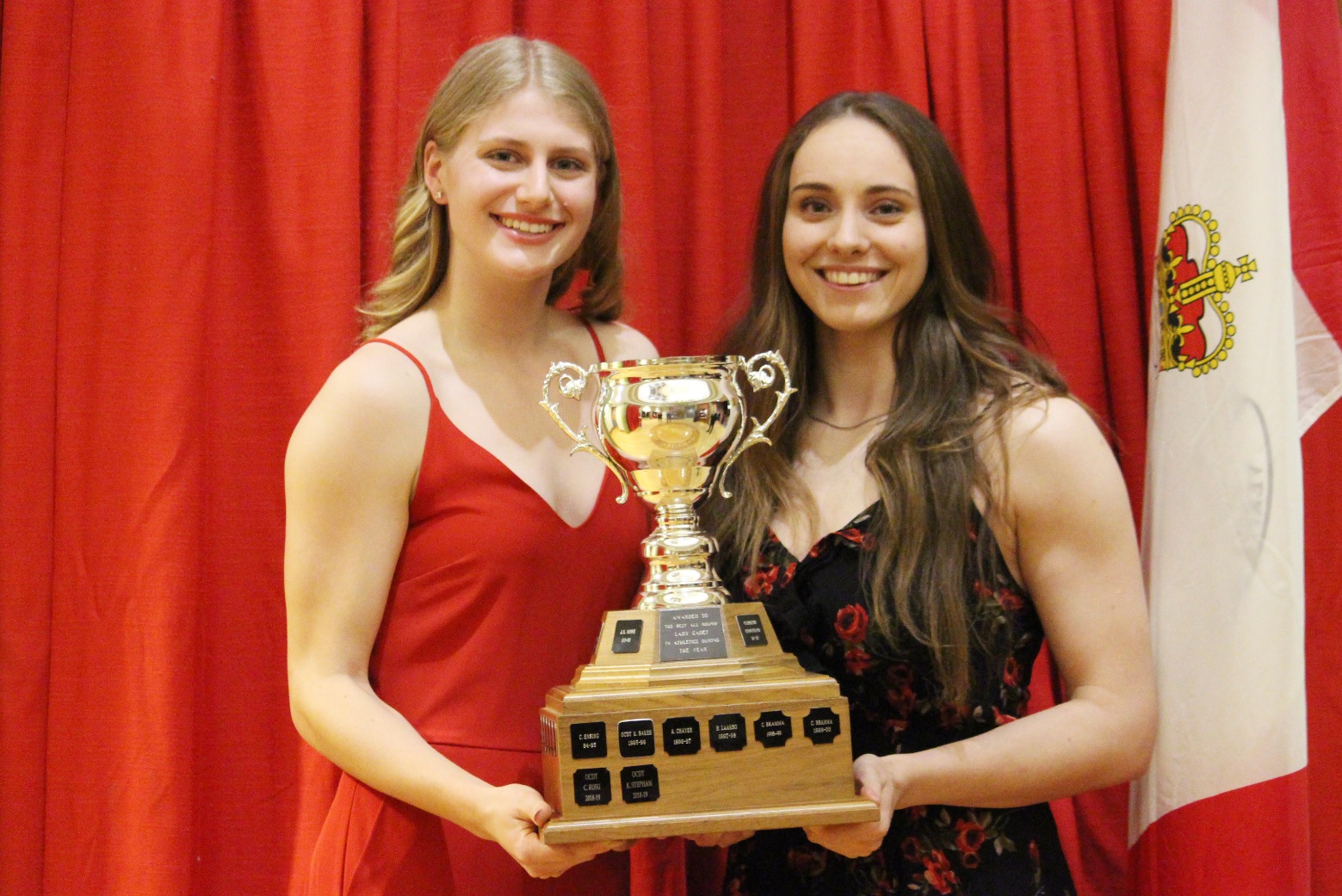 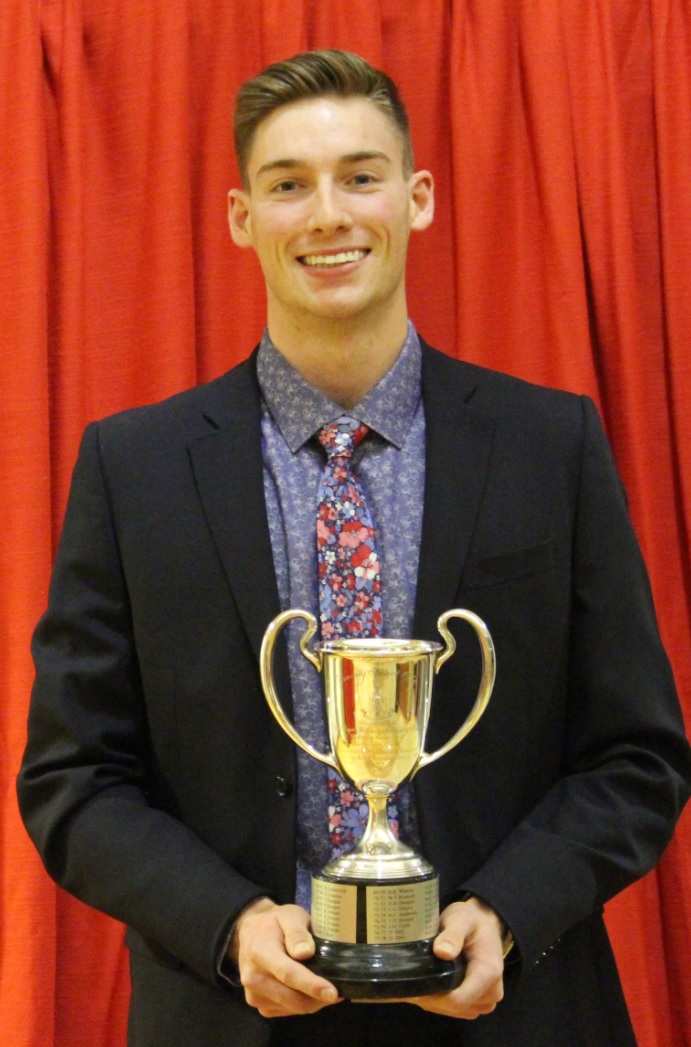 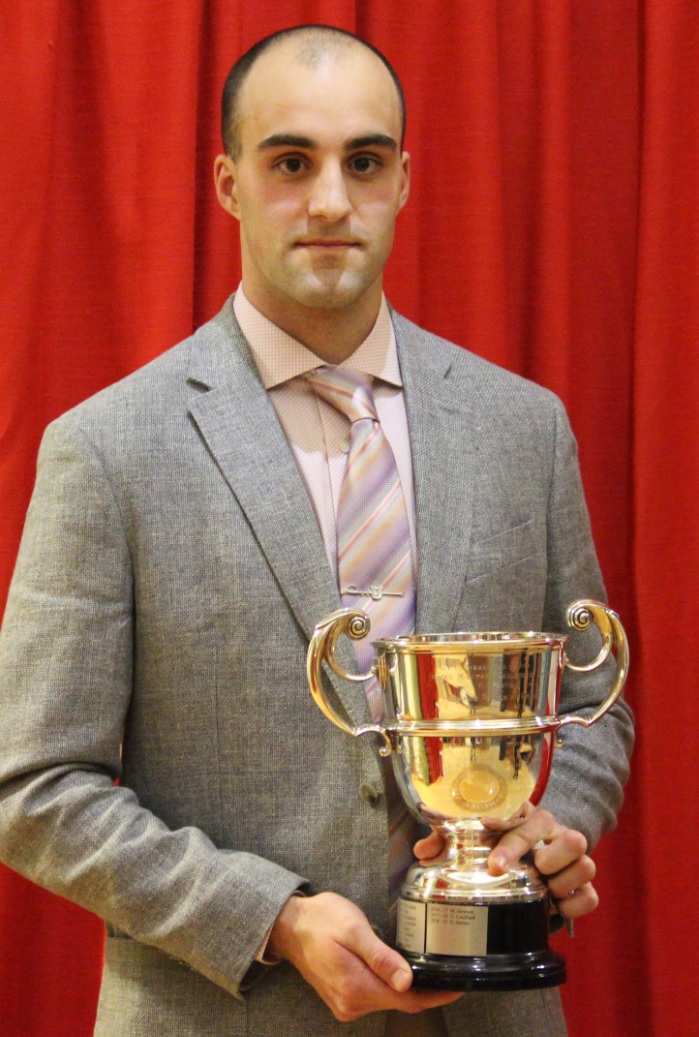 Team of the Year: Men’s Hockey 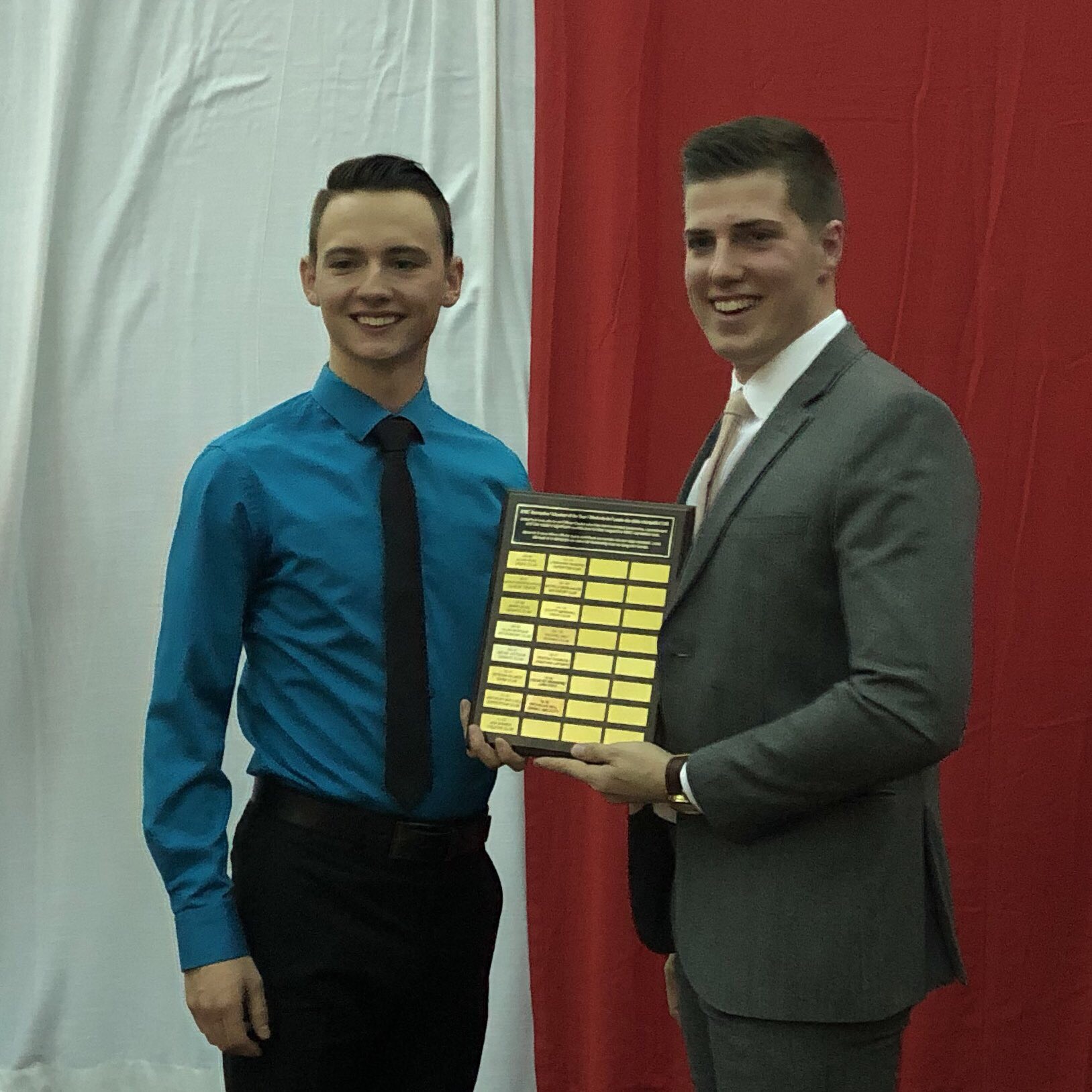 Club Awards Go Off Without a Hitch

In front of many peers as well as distinguished guests, including the Commandant and the DCdts, individuals from all the clubs were honoured for their achievements and dedication this year. It was also a chance for club members to thank their coaches and supervisors, with many groups gifting signed, framed pictures to the people who help run their clubs.

It was a fun night of celebration, as members from the RMC Athletics clubs relived some of the highlights from 2018-19 in a year-end video.

Not at this year’s awards was Acting Recreation and Intramural Manager Samantha Linton, who welcomed her first child just a few days prior. The team she left in charge managed to put on a great event in her absence. Matt Somerville, the Rec Coordinator, is filling in while Samantha is on maternity leave.

There was a surprise announcement to close out the night. The club athletes were the first to get a sneak peek at a new logo for the RMC Department of Athletics, to be publicly unveiled before the students return to competition at the end of the summer. The same video was shown to the varsity athletes on Thursday.

See below for a fill list of club award winners:

Recreation Club Volunteer of the Year

Competitive Club Volunteer of the Year

Rookie of the Year

Rookie of the Year