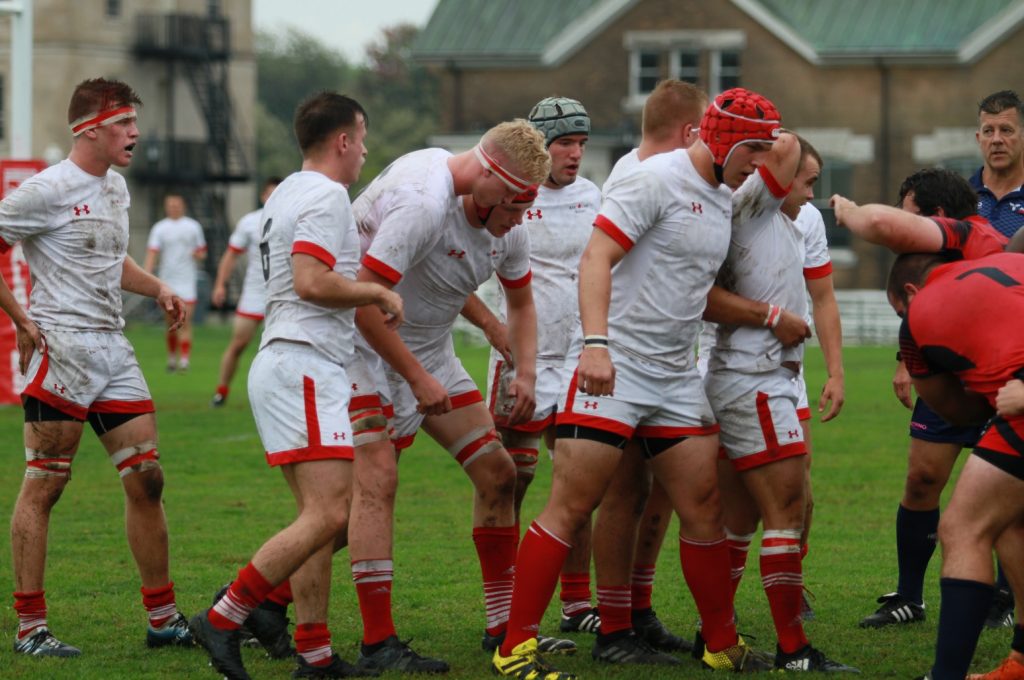 During the weeks of 30 September – 14 October, the Paladins competed in numerous varsity and club competitions.

The Paladins played in a pair of preseason tournaments in the last two weeks, competing in the Brock Invitational and the Annual Military Academy Tournament at USMA West Point.

The RMC crew put in at the Head of the Trent and the Head of Brock regattas over the past two weeks, as their fall season starts to wind down. The Paladins efforts made the team and College proud.

Hannah Lee went into the Taekwondo Canada Open in Montreal knowing she would compete individually and with her partner in Poomsae – the discipline of performing Taekwondo patterns – but ended up on the podium in the team competition.

The Canada Open welcomes members of the World Taekwondo community to the country each year, featuring high calibre athletes, such as the current Pan Am champion.

The team from Puerto Rico was short one member, so, just an hour before the competition, they asked Lee to join them. The First Year Officer Cadet at the Royal Military College of Canada jumped at the opportunity, making the most of the limited time to learn her role on a new team. While most teams train together for months to fine-tune the synchronization and rhythm required in the discipline, the Puerto Rican team, featuring Lee, impressed coaches from around the world and the judges with their performance, earning the silver medal in the female team under 30 category.

Samuel Xiao, Lee’s fellow First Year at the military college, earned a bronze medal in the individual male under 30 Poomsae category, and the pair placed fifth together.

On Saturday, October 5, the RMC Running Team travelled to Ottawa to the Mooney’s Bay Park area where the Annual Capital Cross Country Challenge races were hosted by the Ottawa Lions/University of Ottawa/Carleton University.  Friday featured High School races, Saturday morning focussed on Elementary School races, and Saturday afternoon was aimed at University and Open races.  The RMC Men’s Team had a solid race – with Team Captain Logan Roots running with the front group throughout while the next 4 finishers for RMC were grouped together from 21:08 to 21:34 to complete our scoring positions and the Team placed 3rd behind Ottawa and McGill.  The Women’s Team also had some good grouping in their race as they finished 5th in the Team scoring in their 6K race.  Good individual results as well with 4 runners improving their previous best time over the 6K course used in both the Men’s and Women’s races as the course featured a European style set up with hay bales at several locations on the course that the runners had to cross, combined with a large hill to both climb and come down as well as almost 200 meters of the course on the sand of the beach at Mooney’s Bay.

Our individual results included RMC records on this course in both the Men’s and Women’s races.  Team Captain Logan Roots improved his own record to 19:12.50 as he placed 4th overall (his previous record set last year was 19:16.5).  First Year cadet Nora Bright set the RMC Women’s record for this course as she finished in 25:09.91 (previous record was set last year by Isabelle Turner with her time of 26:10.2). 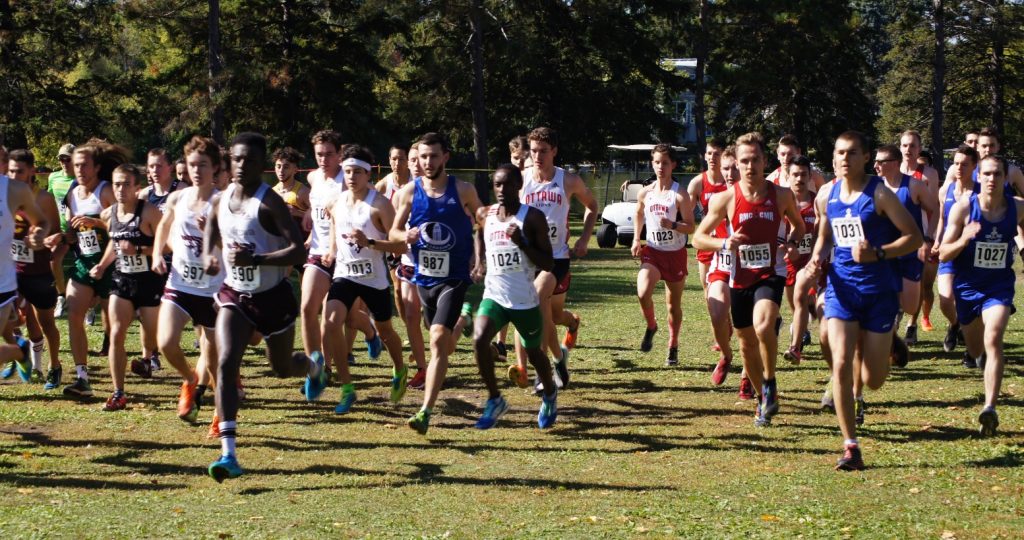 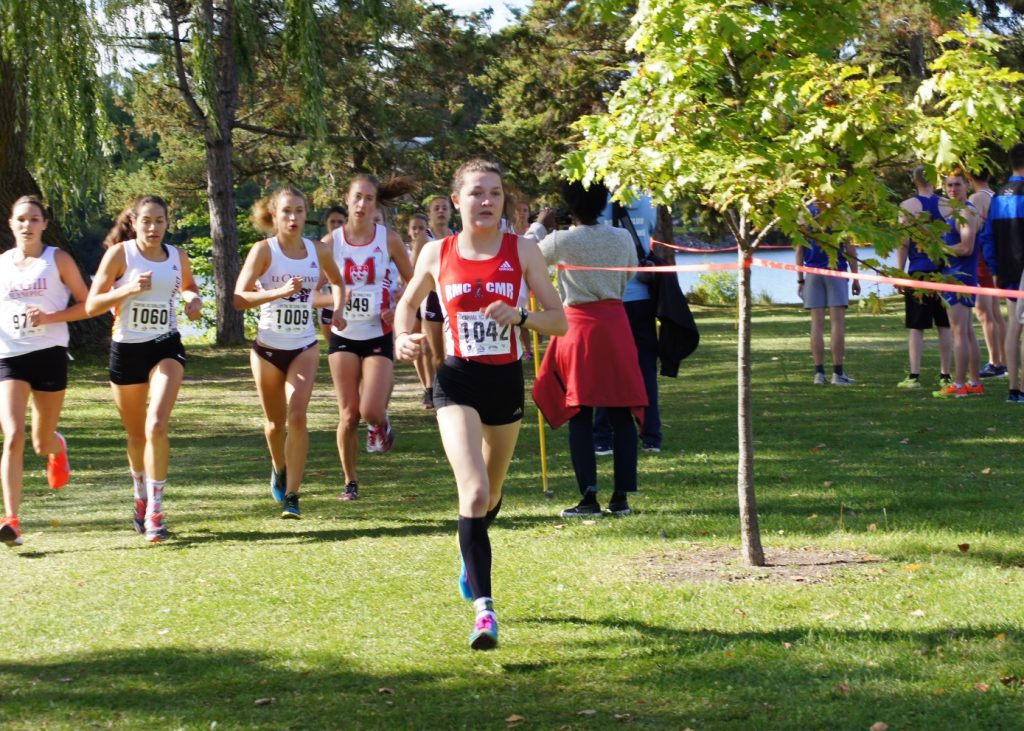 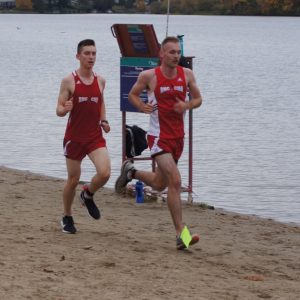 On Sunday, October 6, Cameron Stanzel took part in The County Marathon which is held in Prince Edward County (in the vicinity of Wellington and Picton).  Cameron completed his first attempt at the Marathon Distance in 3:50.13.0 as he placed 47th of 160 finishers in the race.

Six athletes from the RMC Running Team competed in Ottawa at the Run Ottawa Jim Howe Memorial 6K Race at the Mooney’s Bay Park and Athletic Facility. (See photo below.)  Our smaller team size at this event was due to many from the Team travelling on the Thanksgiving Weekend.  The Race basically used the most of the same course that was featured in last week’s Ottawa Capital Cross Country Challenge (hay bales were not in place for this race).  A total of 53 runners (Men and Women combined) completed the 6K course.

Co-Captain Gordon Emerslund led the way for the RMC Runners, placing 3rd while Jonathan Boswell had a quick start leading through the first loop on the course and then finishing 4th overall. (See photo at left.)  Claudia Lizin placed 16th (4th Women’s finsher) with a strong steady run athough she was feeling the effects of a cold/bronchial infection. 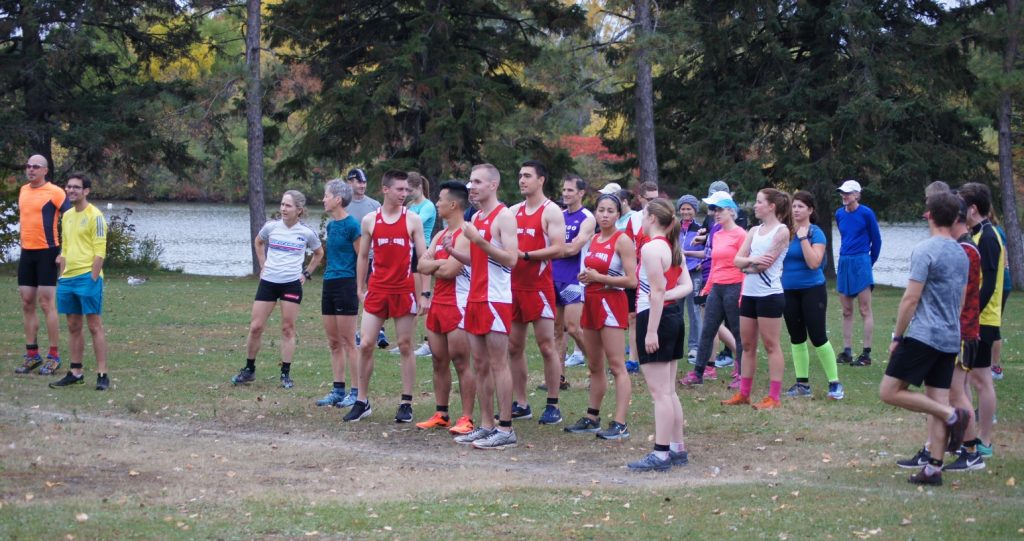 Climbers from RMC returned to Calabogie this fall to take part in an annual weekend climbing trip.

RMC sent a delegation to compete at the 2019 Canadian International Open in Longueuil, QC. 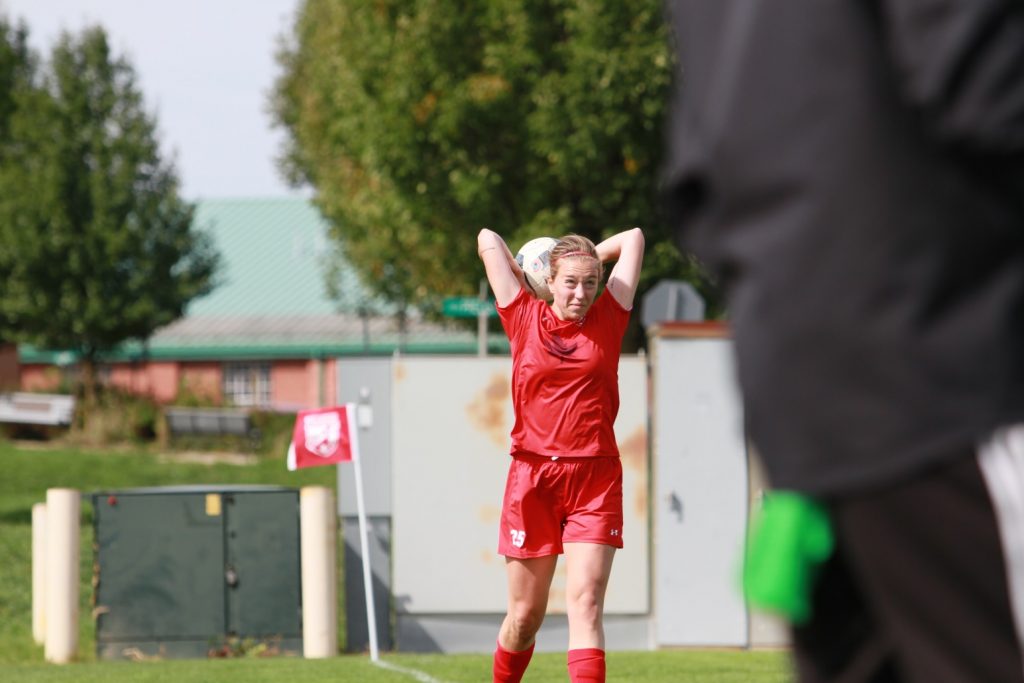 Kingston, Ont. (October 5, 2019) – A new year, and a new team. The RMC Paladins earned a victory in the first game of the 2019-20 OUA regular season, defeating the UQTR Patriotes 3-2 at Constantine Arena in Kingston on Friday night.

The season couldn’t have started any better for RMC, as Seamus Maguire (Victoria, B.C.) batted the puck out of the air on the first shift of the game to give the home team the lead just 28 seconds into the game.

Maguire is one of just three seniors on the RMC roster. Head coach Richard Lim said he knows the program’s in good shape with leaders like Maguire, Mathew Michie (Port Coquitlam, B.C.), and Matthew Muller (Kingston, Ont.) to set an example.

“It makes my life a lot easier, knowing that those guys are doing the right things day-in and day-out, on the ice, off the ice, and across the street at the College,” Lim said.

Midway through the first period, Rhett Willcox (Surrey, B.C.) doubled the Paladins lead on the power play with a redirection in the slot.

After UQTR got one back heading into the intermission, rookie Noah Rowe (Nepean, Ont.) scored his first OUA marker, and the eventual game-winner, as the lone goal in the second period. With some excitement surrounding the Paladins recruitment class, Lim was impressed with his first years across the board.

“This is the most skilled team we’ve had in recent memory,” Lim said. “Our young guys are contributing right away, and we’re going to have to lean on them.”

Next weekend, RMC heads to North Bay for a pair of games against Nipissing, who the Paladins typically battle for a playoff spot. The team returns to Constantine Arena on October 18 and 19 for consecutive games against Ontario Tech. 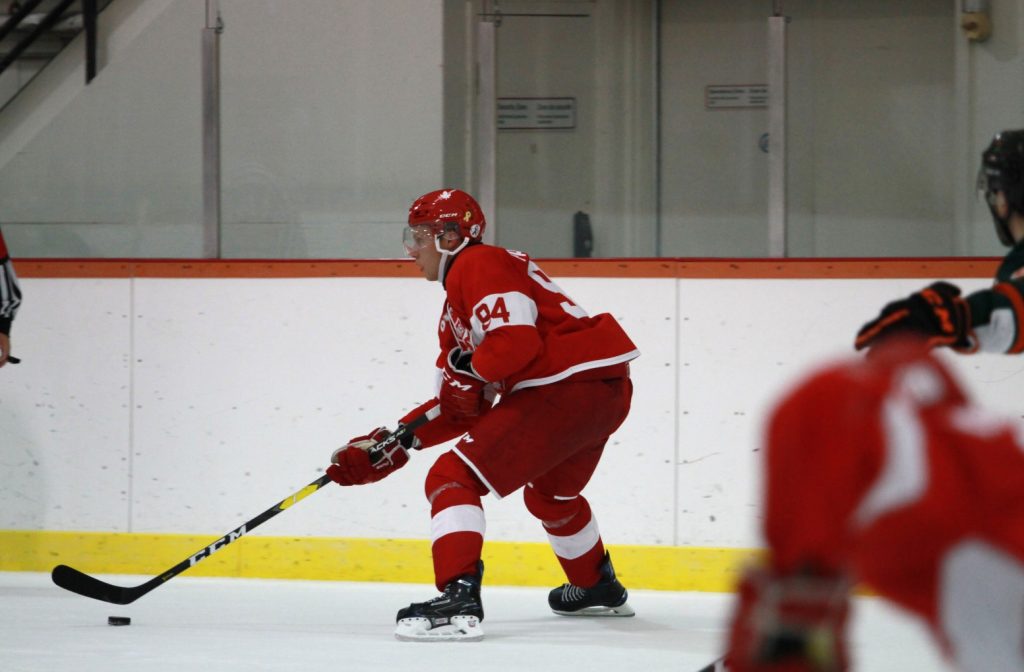 North Bay, Ont. (October 11, 2019) – Christopher Paquette (Kingston, Ont.) netted the first goal of his OUA career on Friday night in the first period of the Paladins 5-4 shootout win on the road against Nipissing, followed shortly after by his second.

After allowing the first goal of the game, the Paladins tied the game on a goal from Dean Kiriacou before Paquette handed RMC the lead late in the first period. Christian Tsukamoto showcased his playmaking ability on the Paladins first tally, before Riley Brandt assisted on the Paquette goal.

Paquette’s second of the game evened the score in the third period after Nipissing went ahead with two goals in the second period.

With under two minutes to play in the third, Nipissing’s Colby Tower completed a hat trick to give his team the lead, but Cameron Lamport kept his point streak alive for the Paladins by tying the score in the dying seconds. Lamport now has at least a point in RMC’s last 12 regular season games, dating back to January.

The new seven minute, 3-on-3 overtime period solved nothing, so the game moved to a shootout.

Kiriacou scored the only goal of the shootout as RMC’s fourth shooter before Brad Van Schubert made the final save to win the game. Van Schubert stood tall in the Paladins net, stopping all four Nipissing shooters in addition to making 40 saves through regulation and overtime.

RMC and Nipissing play the rematch of Friday’s exciting game at 7:30 PM on Saturday again in North Bay. 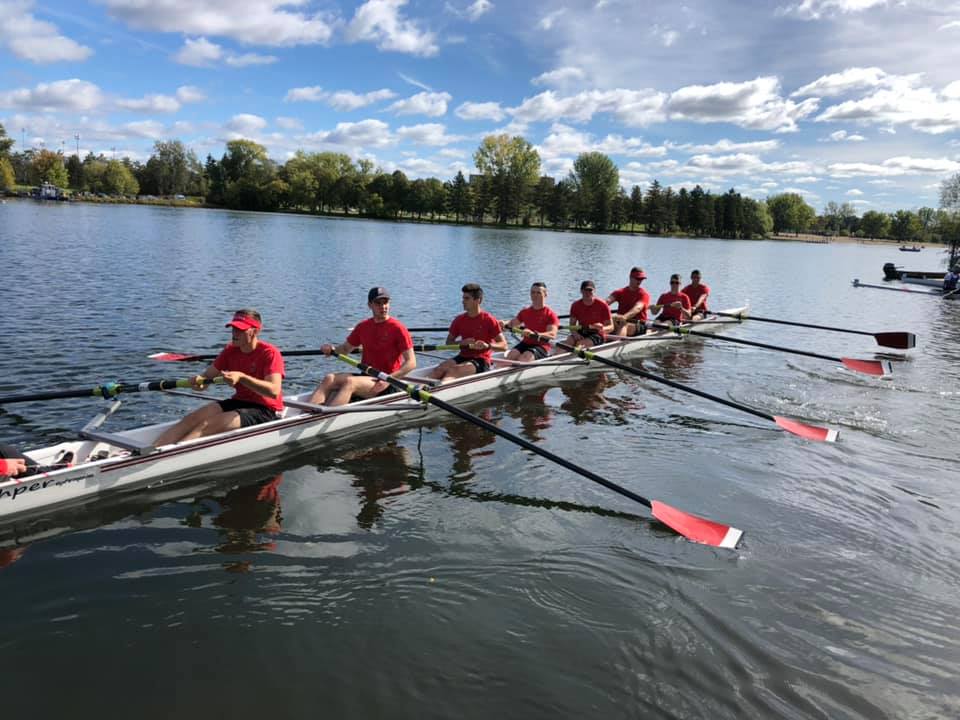 Gliding Into the Season: RMC Rowing at the Head of the Rideau

(3 Oct 2019) The RMC rowing crew has started off the 2019-2020 season strong and is looking forward to keeping the momentum at the Head of the Trent Rowing Regatta on the 5th of October. The season started off on September 29th in Ottawa at the Head of the Rideau. The team (led by the club president, 27953 OCdt Daniel Walcott, alongside their dedicated and knowledgeable coaching staff) jumped head-first into the competition with excitement, drive and focus. The varsity crew competed as a men’s 8 and started the day off with a 5 km race placing third, a record finish for the team at the Head of the Rideau. Simultaneously, the team’s women crew had their first race of the day in a four-person boat and battled their way up the river. As the afternoon quickly approached, the 3rd race of the day set off with the Men’s Open 8 in the Captain Matt Dawe boat, which carried the 8-man crew to the first victory of the day. With 28087 OCdt Adam Blok as cox seat keeping the crew motivated, they transitioned into the 4th race of the day, the mixed recreational 8. This was the team’s second win of the day but the first of two races where the team took the gold by over a minute. In the final race of the day, the men’s double took first place, earning them the gold medal. The final two races of the day were the women’s varsity 4 and the open 4 that had a great start to the season giving both crews a chance to polish their skills for the next competition. Head of the Rideau 2019 was one of the best performances the RMC crew has ever had on the Rideau and was a great start to the season which is now in full swing with two more competitions back to back at Trent University and Brock University in two upcoming weekends.

The RMC Foundation would like to thank H6604 Capt(N) (Ret’d) Jim Carruthers for his generous donation to establish the Carruthers Endowment, which ensures critical rowing development opportunities will always be available at RMC. 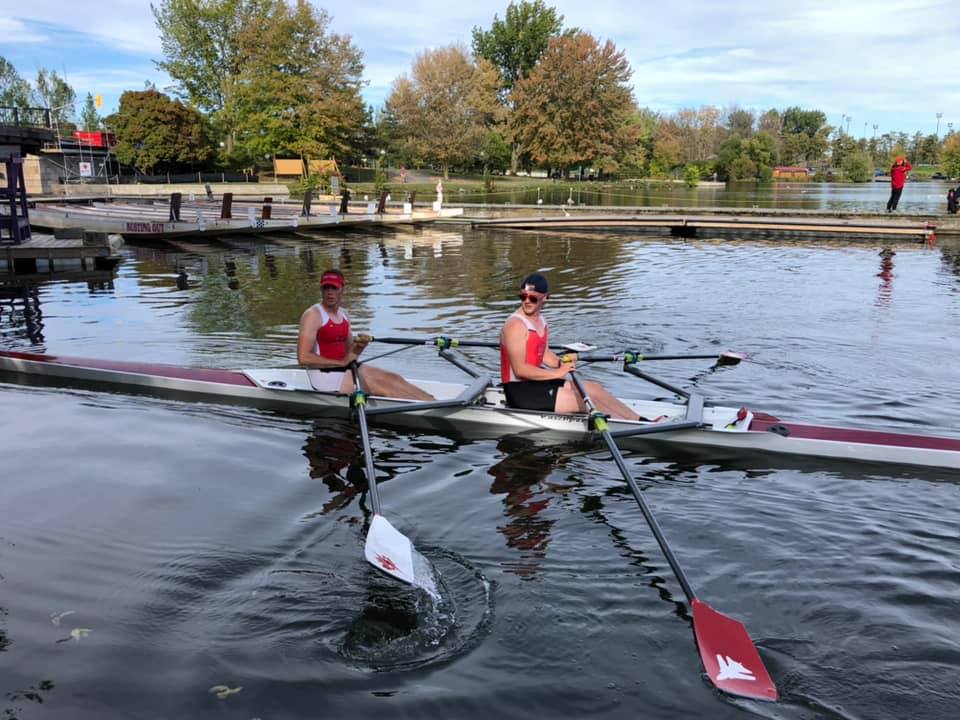 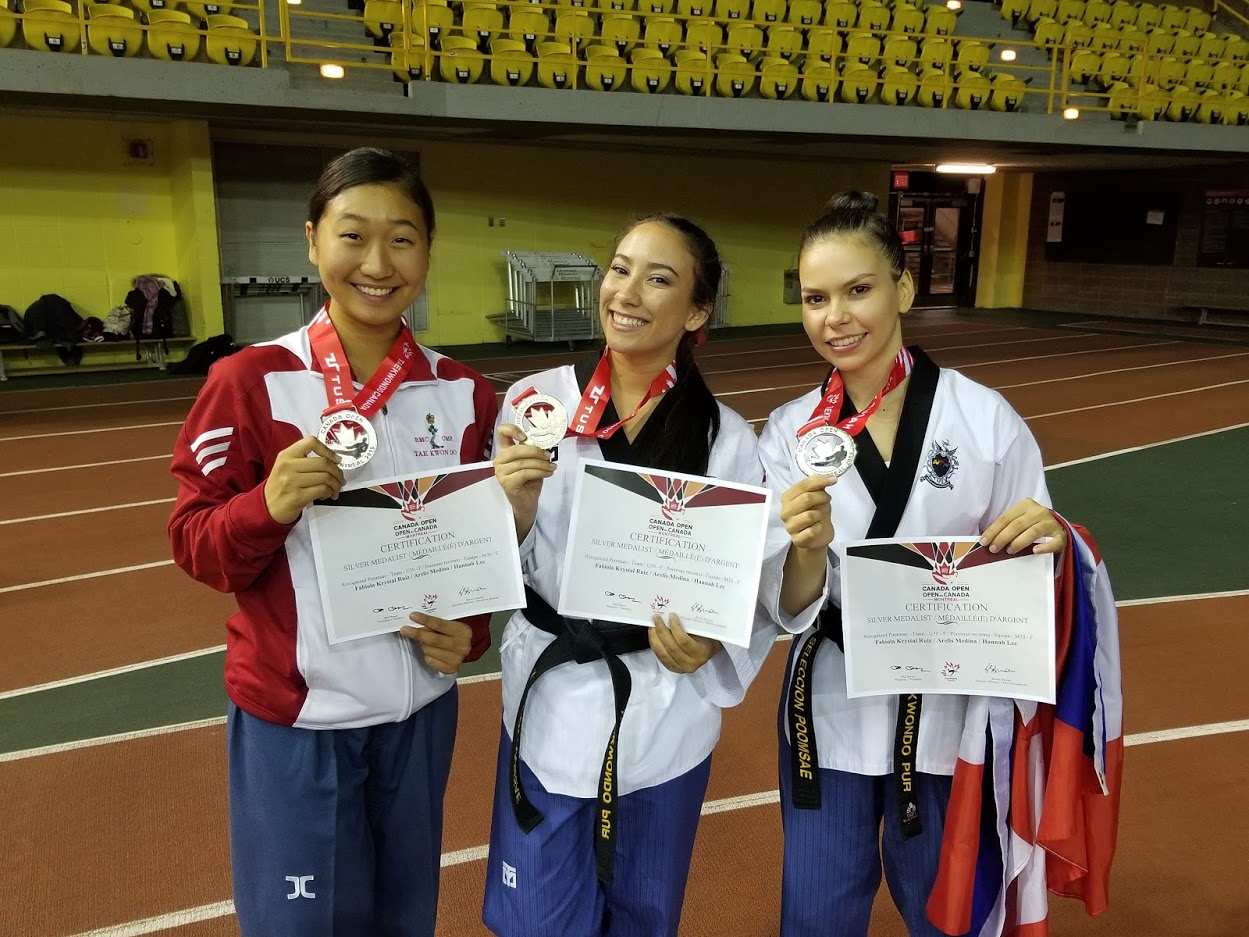 Kingston, Ont. (October 7, 2019) – Hannah Lee (Cambridge, Ont.) went into the Taekwondo Canada Open in Montreal knowing she would compete individually and with her partner in Poomsae – the discipline of performing Taekwondo patterns – but ended up on the podium in the team competition.

The Canada Open welcomes members of the World Taekwondo community to the country each year, featuring high calibre athletes, such as the current Pan Am champion.

The team from Puerto Rico was short one member, so, just an hour before the competition, they asked Lee to join them. The first-year Officer Cadet at the Royal Military College of Canada jumped at the opportunity, making the most of the limited time to learn her role on a new team. While most teams train together for months to fine-tune the synchronization and rhythm required in the discipline, the Puerto Rican team, featuring Lee, impressed coaches from around the world and the judges with their performance, earning the silver medal in the female team under 30 category.

Samuel Xiao, Lee’s fellow first-year at the military college, earned a bronze medal in the individual male under 30 Poomsae category, and the pair placed fifth together.