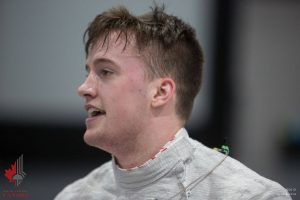 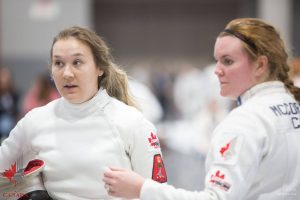 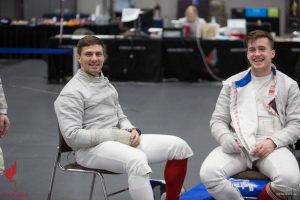 Fencing the best of the best: Nationals in Quebec City

While Fourth Year Cadets were receiving their commission and saying farewell to RMC, nine fencers from the Royal Military College were pursuing their own eye-opening adventure. This year on May 17-20, RMC was able to send a team of Second and Third Year Cadets to compete against the best fencers in the country at the 2019 Fencing Nationals in Quebec City, QC.

Fencing is comprised of three weapons: Foil, épée and sabre. Foil is the lightest weapon, and where touches are scored with the tip and priority plays a crucial part in manipulating the opponent. In épée, the weapon is much heavier and the whole body is considered target, so it is important to keep good distance, and watch those wrist hits!. In sabre, the fencers moves at lightning speed, and the touch is scored if the blade makes contact with the body above the waist.

Despite having very different styles and complexities, each weapon follows the same competition procedure. Fencers begin by being allocated to a pool where they will fence 6-7 opponents round-robin style. Afterwards, the fencers are ranked based on how many wins and losses they’ve amounted and the bottom 20%-30% are cut. From there, direct elimination matches are conducted, and the only way to stay in is to keep winning.

The venue, the competitors and the intensity was unlike anything we had ever seen at the university level. This tournament meant a lot to fencers trying to qualify for the National Team, and that meant that their livelihood was dependent on their results. A lot of stress comes from waiting in between matches and maintaining focus. It can take anywhere from 1-5 hours to complete an event, depending on how far you go. This was an excellent opportunity for the Cadets to grow as fencers, and come back to the OUA circuit stronger than ever.

Many team members fenced 2-3 events in categories such as University, Senior and Team. A notable mention to 28623 OCdt Hugo Clements who fenced 4 events (University, Senior, Junior and Team) over the course of four days. It took a lot of physical endurance and mental resilience to compete multiple days in a row. Bravo Hugo!

Coaches Patricia and David Howes conducted an intense three week training camp for the Nationals, with morning, afternoon and evening training sessions. The fencing they’ve seen and experienced will only improve the RMC Paladins’ skills, and is part of why they are so successful and competitive against bigger schools such as Queen’s University and the University of Toronto  in the OUA.

23012 Major Marie-Christine Alamy, the Chief Instructor at RMC, attended this event as the military chair of RMC Fencing and also as the CISM Fencing Team Manager. Without her support, this critical learning experience would not have been possible for our cadets. We are very pleased to have gone, and make the podium for two events! Congratulations to 28190 NCdt Garrett Whelan and 27975 OCdt Lakni Wickramarathna for their bronze medal in University Men’s Sabre and University Women’s Foil.

Here are all the results from Nationals: