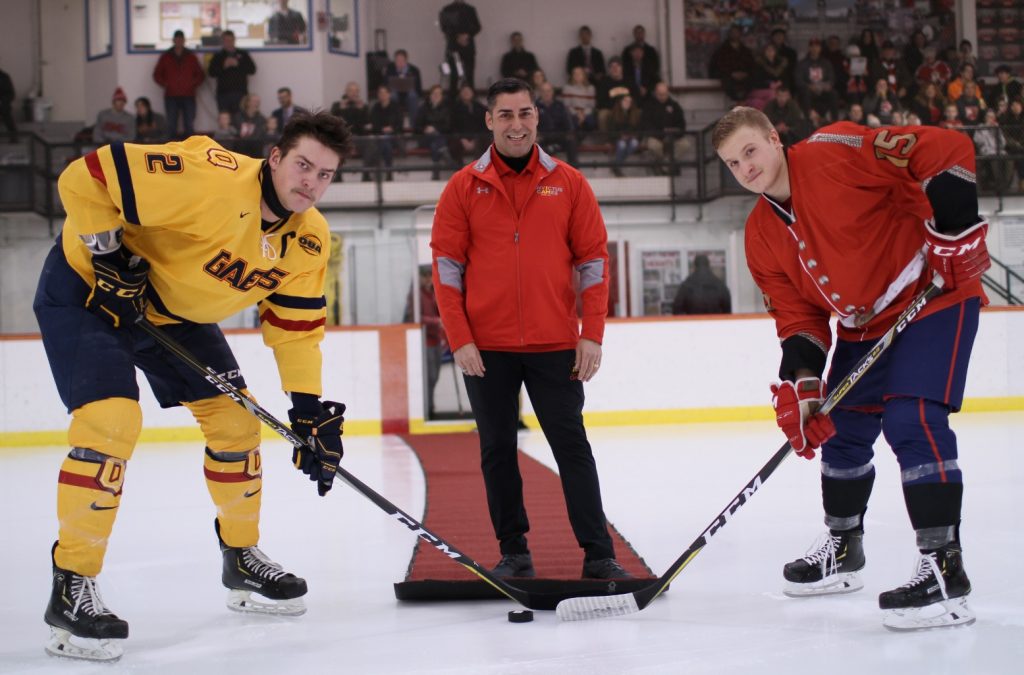 Paladins Raise over $1,800 for Soldier On vs Queen’s

Kingston, Ont. (November 22, 2019) – Taking advantage of the rivalry between Queen’s and RMC, the Paladins capitalized on the opportunity by raising money at Friday night’s game to support Soldier On. The final donation total rang in at $1,839 with over 600 fans packed into Constantine Arena.

Major (retired) Rob Hicks was in attendance to perform the ceremonial puck drop. He was a participant in the Soldier On program, which led him to captaining Team Canada at the 2018 Invictus Games.

Soldier On is a program of the Canadian Armed Forces Transition Group and is committed to supporting veterans and serving members to adapt and overcome permanent physical or mental health injury or illness through physical activity and sport.

“The special thing about Soldier On is that everyone here at the school and in the military can be in the same shoes as the people being helped by Soldier On,” RMC hockey captain Mathew Michie said. “That’s why that charity is so special to us as a school and a team.”

On the ice, the Paladins jumped ahead in the first period on the power play, when Chris Paquette won the offensive zone face-off forward, straight into the Gaels goal. Before the end of the opening frame, Rhett Willcox was parked in front of the net, and made no mistake when Marshall Skapski sent the puck his way. Liam Stagg earned the second assist on the Paladins second goal.

After Alex Row opened the Gaels scoring in the second period, with Ryan Cranford and Eric Margo earning the assists, Alex MacDonald took the puck end to end for the Paladins, finishing a highlight-reel goal into the top corner to restore RMC’s two-goal lead.

As the second period continued, the Queen’s power play came to life, as Nevin Guy scored to make it 3-2 at the second intermission. Matthew Hotchkiss and Jaden Lindo earned the assists on the Gaels second goal. Once again on the man advantage, Queen’s tied the game when Jared Bethune scored his fifth goal of the season. With the third period winding down, Hotchkiss netted the game-winner on another Gaels power play, which ended the night with three goals on four opportunities in the 4-3 Queen’s win.

The Paladins are back in action Saturday night when they host Concordia at 7:00 PM.

During the weeks of 11–24 November, the Paladins competed in numerous varsity and club competitions.

In 2018, the RMC Fencing team placed 2nd overall at the 2018 Ontario University Athletics Championships, winning team bronze medals in Epee and Sabre, as well as a bronze medal in individual Sabre. At the 49th annual RMCC Fencing Invitational Cup, the team again finished 2nd overall and earned one medal. During the same event, RMC won a hard-fought battle against the United States Military Academy to retain the Military Challenge Trophy.

On 28 November starting at 1830 hrs, the overall winners of the 2019 CAF Sports Awards Ceremony will be announced.

OCdt Roots is a driven and remarkable runner who was named a member of the CAF CISM running team. After recovering from a foot injury he suffered in 2017, he won the Canada Army Run 5k by a large margin. OCdt Roots amassed numerous other 1st place finishes in multiple road races across North America, including the RMC Wing Harrier 5k. He also set a course record at the SUNY Polytechnic 6k in New York. He is a resilient young officer who is an example of leadership and courage for his fellow Cadets.

On 28 November starting at 1830 hrs, the overall winners of the 2019 CAF Sports Awards Ceremony will be announced.

RMC competed at the Belleville Beast Fall Invitational, earning a few medals in a couple fast days at the pool.

The expedition club summited Mt. Washington on their final trip of the fall. Next up is an exciting trip for a select group to Mount Kilimanjaro, made possible thanks to the RMC Foundation and its donors.

RMC debate had two competitions in the last two weeks, first participating at the McMaster Pro-Am Debate Tournament in Hamilton, before heading to Montreal for the BP Champs Debating Tournament.

Paladins Judo traveled to Annapolis for a competition at the US Naval Academy. 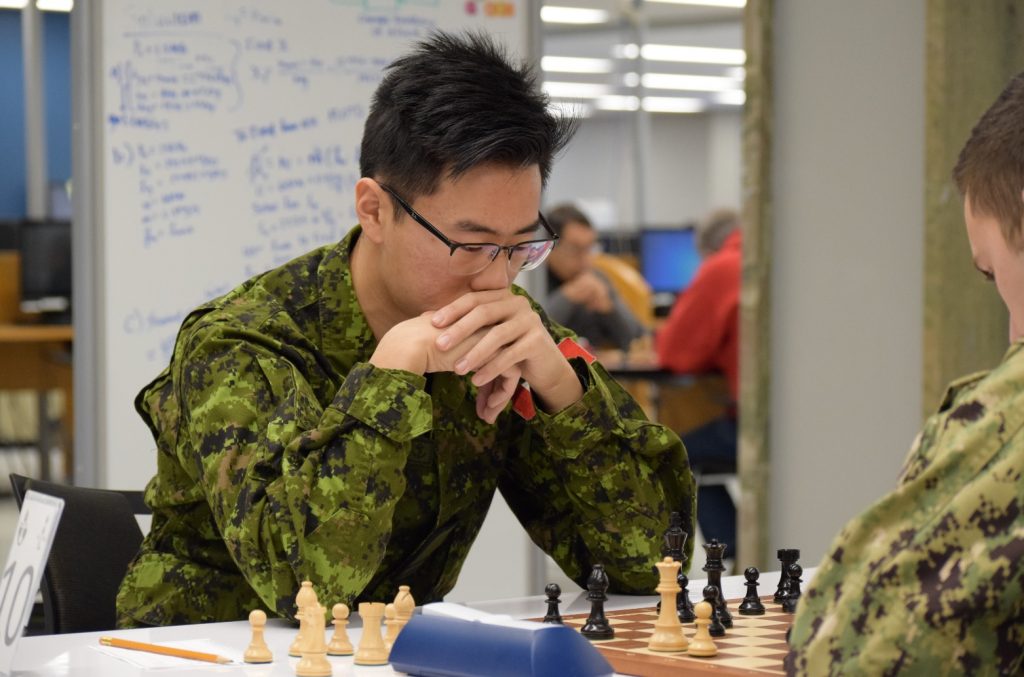 RMC hosted its first annual Chess Tournament. There were 19 competitors in total—13 playing rated games and six in the unrated section. It was comprised of nine Officer Cadets from RMC, four active military players and six veterans. OCdt Lee, OCdt Bouchard, OCdt Di Blasi, and OCdt Adams were the RMC students that competed in the rated section.

The tournament was divided into four rounds with a rapid time control of 25 minutes with a 5 second increment. OCdt Wang got first place in the unrated section with 4 wins. For rated section, the top three players were LCol (ret) Brian Philips with 4 wins, LCol Regis Bellemare with 3 wins, and OCdt Lee with 3 wins as well. Players from RMC found it valuable to play against other military players and veterans who had much stronger ratings. Certain games were especially close—with only seconds remaining on the clock, one single pawn move had decided the overall endgame.

This was the last tournament of this semester, and the RMC Chess Club expects to perform even better through the winter. The experience was certainly valuable and the chess club hopes to build on this experience by hosting a tournament again next year and the subsequent years following that. Chess continues to grow at RMC!