Kingston, Ont. (July 15, 2019) – Sports teams at the Royal Military College of Canada will don a new logo on their jerseys for 2019-20, as the RMC Department of Athletics unveiled its new logo Monday. The new Paladins branding will stretch from the school’s varsity teams, which compete in the OUA, through its competitive and recreation clubs, intramural sports, and physical education.

“We now have one uniquely RMC logo our teams can wear proudly,” Director of Athletics Darren Cates said. “It’s a brand people will recognize when they see it on the streets of Kingston and as our athletes travel across the country to compete.”

Paladins fan gear will be available at the CANEX before teams start to compete in the fall.

The new brand retains the classic red and white of RMC and Canada, while creating an entirely new, unified look for the Paladins moving forward.

Framing the top of the new logo is the outline of the RMC Memorial Arch, which is one of the most identifiable and meaningful monuments on campus. Officer and Naval Cadets only walk through the arch twice during their time at RMC: once on their first day to mark their entrance into the College; and again on their last day, after graduating and earning their commissions, as they leave RMC. Built post-WWI, the arch stands as a monument to honour all ex-cadets who have fallen in combat after leaving the College.

A closed visor on the Paladin’s helmet was a conscious choice for inclusion. The Rebranding Committee didn’t want any one face representing the new brand, opting instead for a closed helmet to signify that anyone can be a Paladin.

The shield shape is symbolic of the Paladins athletes’ commitment to Canada’s national defense, while the raised sword indicates preparedness and military valour.

Custom lettering and a custom maple leaf round out the design, reinforcing the unique student-athlete experience at RMC.

The final design was produced by TRI³ Hardgear, a Canadian sports design and manufacturing company, with input and guidance from the RMC Paladins Rebranding Committee. 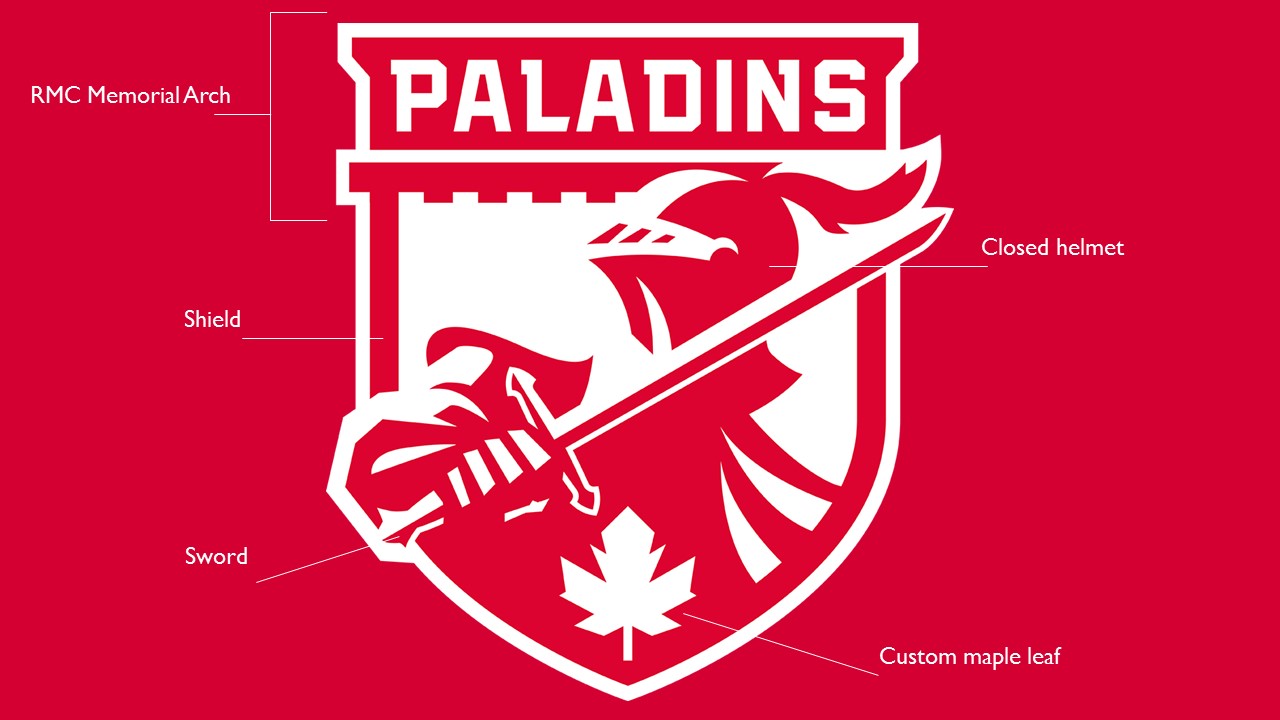