(April 10, 2020) – Chris Paquette (Kingston, Ont.) from the men’s hockey team and Garrett Whelan (Grandora, Sask.) from fencing tied for the Paladins Male Athlete of the Year award, while Lauryne Mvuezolo (Ottawa), of the women’s volleyball team, claimed the title of Female Athlete of the Year.

Because the Royal Military College of Canada has sent its students home, the Paladins announced their varsity award winners via social media throughout the week of April 6-10 in lieu of an in-person awards banquet.

Paquette and Whelan shared the Tommy Smart Cup as RMC’s top male athletes, as both earned the highest achievements in their respective sports during the 2019-20 seasons. 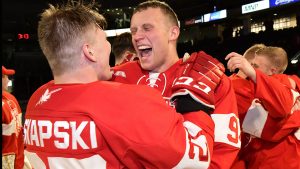 In his first year at RMC, Paquette made an immediate impression with the hockey team. As the first NHL draft pick to join the Paladins, he raised the level of play at Constantine Arena and led RMC in goals (15) and assists (17). With 32 points in 28 games, Paquette was named the OUA East MVP, the OUA East Rookie of the Year, an OUA East First Team All-Star, a U SPORTS Second Team All-Canadian, and a member of both the OUA and U SPORTS All-Rookie Teams. He is the first hockey player from RMC to earn OUA MVP or U SPORTS All-Canadian honours. Paquette’s incredible rookie season helped the Paladins return to the playoffs for the first time since 2006 and defeat West Point for the first time since 2002. 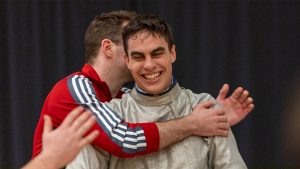 In his final year at RMC, Whelan had another standout year on the Paladins sabre team. After collecting a few medals throughout the season, he dominated at the OUA Championship in February. In the individual competition, he went undefeated through the first and second rounds of Poules, before capping off the perfect day with the gold medal. Whalen was once again perfect in the team relay competition, winning every single matchup en route to winning his second OUA gold medal in as many days. Whalen’s efforts earned him recognition as an OUA All-Star and led the Paladins to overall silver at the OUA Championship. 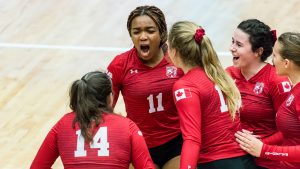 From the women’s volleyball team, Mvuezolo was awarded the Kelly Gawne Memorial Cup as the top female athlete at the College. Mvuezolo performed impressively in 2019-20, scoring 206 points (a career-high) and making 174 digs. For the second consecutive season, she recorded more than 30 aces and was once again in the OUA’s top three among non-liberos, in terms of digs per set. Mvuezolo’s efforts on both offence and defence earned her OUA East Second Team All-Star recognition at the end of the season.

The Paladins also award the H.R.H. Prince of Wales Cup to a graduating cadet in recognition of athletic performance and excellence in the four College components (academics, bilingualism, military leadership, physical fitness) throughout their entire college years. Kyle Grenier (Winnipeg) from the fencing team was this year’s recipient after earning an OUA All-Star nod in 2020 as a member of the gold medal sabre team.

Full details on all award-winners can be found at: gopaladinsgo.ca/2020VarsityAwards

The 2019-2020 season for RMC’s Competitive and Recreation clubs was one for the books.  Although it was cut short, our club members accomplished some extraordinary success.

Members of the RMC rowing community, including current students, recent alumni, and staff traveled to England during the summer of 2019 to represent Canada and the Canadian Armed Forces in the 100th anniversary The King’s Cup at the Henley Royal Regatta, which originally took place following the First World War.

OCdt Hannah Lee, a first-year on the RMC Taekwondo team, won gold in team Poomsae at the National Championships, earning the right to represent Canada at the World Championships later this year.

In his final year at RMC, OCdt Logan Roots solidified his place among the running elite by winning the Canada ARMY Run for a second consecutive year. He also traveled to the World Military Games in October to represent Canada and the Canadian Armed Forces in international athletic competition.

RMC sailor, NCdt Jacob Taljaard won the Canadian Intercollegiate Sailing Associations Male Crew of the Year award for being the top crew in Canada this season. His efforts, along with those of the RMC Sailing team, resulted in our best ever overall team finish in Canada (3rd).

RMC Expedition club reached the summit of Mt. Kilimanjaro over the Christmas holidays and enjoyed a two-day African safari.

At the end of each year, RMC recognizes many of our competitive and recreation club members for their accomplishments.  This year we had a total of 24 award winners including our Competitive and Recreation Volunteer of the Year award winners.  Congratulations to Joel Renaud of our Judo Club (competitive) and Naman Sharma of the Photography Club (recreation).  Thank you for all your time and hard work in bettering RMC clubs. For a full list of our 2019-2020 Club award winners please see gopaladinsgo.ca/2020ClubAwards

Many of these opportunities would not have been possible without the generosity and continued support by the RMC Foundation. With the Foundation support, many of our cadets are provided with once-in-a-lifetime experiences, which truly enhances their time here at the college and their abilities as future leaders.

Thank you to the Class of 1962, and H6604 Jim Carruthers for their continued support in ensuring that these athletic opportunities are not missed due to lack of government funding.  This support is truly needed each year in the Athletics department due to the increased demand on already tight budgets.  We are proud to be able to support our future leaders and help the world see the athletic prowess of our RMC Students.

On Thursday, 12 March 2020 our winter intramural teams played their last team games and the cancellation of playoffs would soon follow. During our winter season squadrons and divisions participated in ice hockey, inner tube water polo, soccer, basketball, volleyball, handball, football, broomball and ball hockey.  For the first time in many seasons all sports were closely contested with many squadrons fielding strong teams.

Congratulations to the following teams on a successful winter intramural season.

Volleyball B: A Div

Basketball A: B Div

Basketball B: A Div

Congratulations to all winners on their successful seasons.

Thank you to the team Captains, CSSO’s, CWIMO, and CWSRO for your efforts an contribution in making this season successful.

*Due to COVID-19 and the cancellation of some playoffs, final rankings were based on season performance versus playoff performance.

The Fan Tower: A Leadership Opportunity