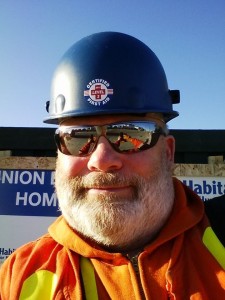 For 13139 Mitch Macleod, the thought of attending military college occurred rather late in his high school career and in a place far from home— Colorado, USA. “We had relatives that lived in Denver at the time. We were there one Easter, and we drove down to Colorado Springs for the day and I saw the Air Force Academy,” he explains. “I said, ‘I wonder if there’s anything like this in Canada.’ And sure enough there was!”

After being inspired on his trip, Macleod attended RMC from 1977-1981, earning a degree in Commerce. Speaking with Mr. Macleod, he laughs that he wasn’t as committed to studying as he perhaps should have been, but says that he did find time to get involved with the RMC scuba diving club. “It was very easy to grab the gear and go throw yourself off St. Lawrence Pier and into the river because it was right there, so yeah, [I] did a lot of that.” he says.

Macleod also speaks of an inherent tenacity that was fostered at the college: “Once I set my mind to do something I [was] going to do it… That is still me today.”

And what has followed Macleod’s time at RMC certainly speaks to his tenacity and gutsiness. Twenty years spent in the Regular Force saw him working as a Logistics Officer with a supply specialty, but 6 of those years were spent with the Canadian Airborne Regiment. From throwing himself off of the pier in Kingston, to throwing himself out of planes: “I amassed over 500 military parachute jumps, which also included a year with the Canadian Forces Parachute Team as a demo jumper with the SkyHawks.” he says. “I just decided I wanted to be on that parachute team for a year, and it happened.”

In 1997, Macleod got out of the Regular Force in CFB Gagetown with the third offering of the Forces Reduction Program (FRP), and then spent some time in Ottawa in the Reserve Force working on various 6-month contracts.

In 2003, Macleod had grown weary of the economy in Ontario, and of living in Ottawa in general. When the opportunity presented itself to go to Afghanistan for up to a year as a contractor for a private company, he seized it.

“I went to Camp Julien on rotation zero as a civilian just as the camp was being set up,” he explains. “I was doing very much the same job that I would have been doing as a Logistics [Officer] in the Army, except I no longer wore a uniform and I no longer carried a weapon to work. I did have a helmet and a flak vest issued to me. I lived in the same quarters, and ate the same food that the people at Camp Julien were eating.”

Macleod elaborates on his feelings of fortune during his time spent in Afghanistan: That he came back safe and sound after two long-term contracts spent there (the first in 2003 in Kabul for 9 months; in 2009 he returned for a shorter contract in Kandahar). “It was tense sometimes… people did get killed while I was over there,” he says. “But I had good faith that the military was going to protect [me] the best that they could.”

Macleod says he was also lucky in a much different way, in that unlike many people who didn’t get to spend any time outside of the camp, he did rather frequently. “I had the opportunity to go into town at least once a week on business,” he says. Often he had the chance to escort people leaving from or arriving to Camp Julien, in transport provided by the military, to and from Kabul Airport.

These days Macleod has traded in jumping out of planes and doing contract work in Afghanistan for contracts in supply chain management (SCM) in Edmonton, Alberta. He speaks of the blessing that is his military pension, which allows him to work 8 months out of the year and then take 4 months off to pursue other interests and travel. In fact, several days after this interview was conducted, Macleod was travelling to Philadelphia, Pennsylvania to visit an old friend from their days in Basic Training and then RMC.

In his downtime Macleod also makes sure to “pay it forward” through charity work. He’s been involved with Habitat for Humanity for about 3 years now helping build affordable housing, and when he’s not working he says he “tends to be out there three to four days a week.” Macleod speaks humbly of his charity work, insisting “I’m not a carpenter by any stretch of the imagination, but I still am capable of providing grunt labour and they seem happy to have that.”

Macleod is keeping very busy, then, and he likes it that way. “I still haven’t developed an urge to not work,” he remarks. And—given his characteristic tenacity—one can wager that the only person to slow Mitch Macleod down, will be Mitch Macleod himself.

Steph Ochej is a freelance writer currently in her fourth year at the University of Ottawa. She was born in Kingston, Ontario and comes from a Canadian military family. She is very passionate about travelling, having already lived in London, UK in addition to spending her 2013-14 school year in Moscow, Russia. She will graduate this spring with an undergraduate degree in Political Science and Russian Language and Culture.