In the final days of the Second World War Canadian and British pilots flying off HMS Formidable were ordered to attack Japanese airfields and naval shipping on the main island of Honshu. Canadian pilot Lieutenant Hampton Gray RCNVR led the attack on the Japanese destroyer Amakusa anchored in Onagawa Bay a small fishing port on the Oshika peninsula just north of Sendai. He pressed home his attack in his usual fearless fashion, releasing a 500lb bomb that sank the Amakusa, but during the attack his plane was shot down and crashed into the bay and his body was never recovered.

Hampton Gray  was posthumously awarded the Victoria Cross, which, together with the Distinguished Service Cross he received for attacking the German battleship Tirpitz, made him the most decorated Canadian Navy officer in the Second World War. “Hammy” Gray, as he was known to his squadron mates, was raised in Nelson B.C. and his photo hangs in the B.C. Legislature.

Over forty years later, in 1986, the Canadian War Museum in Ottawa asked if Hammy’s aircraft could be recovered from the bay, and an attempt was made to do so but had to be abandoned when live allied bombs were discovered in the suspected location. The bombs were countermined and the resulting large explosion ended any hope of finding the aircraft.

However, in an extraordinary gesture of understanding and compassion, the people of Onagawa who had suffered 157 casualties in the Allied attacks approved the erection of a monument to Gray and donated a beautiful site in a park high on a hill overlooking the bay. The monument was donated by the province of B.C. and the Lions Club of Onagawa undertook to maintain it in perpetuity.

Included on the monument is an inscription that proclaims:

great kindness supported the establishment of this memorial. It is hoped it

lasting symbol of peace and friendship between our two nations”

In the years that followed, growing relationships developed between Canada and Onagawa. Canadian Navy vessels visiting Japan have sent contingents to the monument; and in 2007 HMCS Ottawa anchored in Onagawa Bay and conducted a memorial service at the site. Meanwhile Nelson, B.C. has established a student exchange program and recently Esquimalt Council voted to seek a twin city relationship with Onagawa. 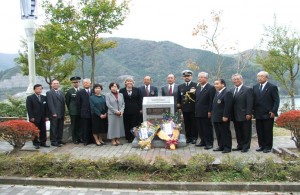 Onagawa Bay opens directly onto the Pacific Ocean. It was located at one of the closest points to the earthquake that spawned the giant tsunami which struck the northeast coast of Japan. The coastline on both sides of the bay formed a natural funnel causing the wave to become constricted and rise to three times its initial height as it roared up the bay and through the town’s commercial and residential districts. The wave, over fifty feet high, carried away most of the buildings in its path, scouring out a swathe of devastation through the town and far up the valley, depositing cars on top of buildings that had escaped total destruction.  An accurate count of victims is still not possible. Bodies continue to be found under the wreckage, and hundreds are believed to have been swept out to sea as the tsunami wave ebbed. 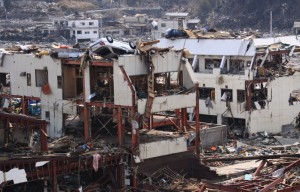 Many of the communities along the northeast coast of Japan suffered major damage and loss of life, but sadly, indications are that Onagawa was among the hardest hit. Aid agencies and organizations throughout the world are mounting campaigns to provide relief for the stricken areas, but the kindness and compassion shown by Onagawa’s citizens in approving the Gray monument, and the existing connections with Canada, the Canadian Navy and communities in British Columbia surely inspires us to do all we can to provide help and relief to this community in its hour of need. No matter how generous we are it can only amount to a small percentage of what is needed, but it will provide a great measure of hope and encouragement for Onagawa’s survivors to know that we care and are providing a helping hand

Financial contributions for Onagawa are urgently needed, and the following initial procedure has been established with the assistance of the Naval Officers’ Association of Vancouver Island (NOAVI):

2. These must  be made payable to “NOAVI” with the annotation “in trust for Onagawa Relief Fund”

3. They should be mailed to:
The Treasurer, Onagawa Relief Fund

4.  The donor’s name and current address must be included.

In cases of individual donations, NOAVI, acting on behalf of the Naval Officers’ Association of Canada (NOAC), will issue charity tax receipts for donations of $50 or more. If any organization wishes to collect funds from its individual members and donate a combined total contribution through NOAVI, a charity tax receipt cannot be provided; however, that donor organization will be identified with the contribution when it is forwarded to Onagawa.

All donations received will be forwarded in total to the designated relief fund authority in the town of Onagawa. Depending on the outcome of ongoing deliberations, funds received by NOAVI for Onagawa after 15 June 2011 will  be amalgamated with similar relief funding for Onagawa collected by the Township of Esquimalt and other organizations.

Queries concerning this Announcement can be e-mailed to the Treasurer, Onagawa Relief Fund at:   bconconi@shaw.ca