What Are They Looking At? Civil Engineering Survey Field School 2019 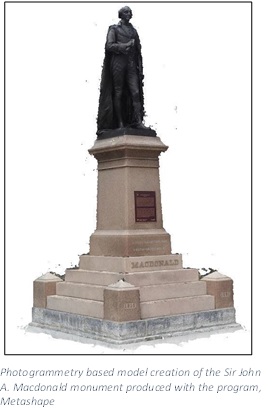 The Third Year civil engineering class of 2020 started their intense two-week survey course at RMCC on the 23rd of April. What exactly is surveying? In simple terms, surveying consists of measuring slopes, distances and angles between lines from established points with predetermined angular and linear measurements. The aim of having the survey field school is to give students the opportunity to practice their leadership, management, and technical skills in a practical environment. Overall, it is a unique and special experience for the civil engineering students at RMC.

The OPI, Capt. Fraser, split the class into five different groups and assigned them to different areas of operation (AO) on campus. The first week was essentially an overview of applying the skills they learned in their Geomatics course (CEE360) taught during the fall semester.

The groups started the survey of their AO by determining their control network. This is the initial and most important step as the following tasks depend on the location of those points. The first day was slow as the students had a general idea of what to do, but were not sure of where to start. With the help from their instructors, Capt. Fraser and Technician, Adam Watson, they were able start and complete the daily surveys. However, what’s done on the field is not all! The students worked tirelessly outside throughout the day and their evenings were spent in the lab uploading their data, doing calculations, and making adjustments to create a final map that accurately represents the landscape. After the first day, it was evident that the next couple of days would be physically and mentally challenging.

Groups slowly started following a routine: waking up, presenting the previous day’s work to the class, going out to the field to collect new data, eating the boxed lunches kindly provided by the CDH staff, then recommencing to collect data until satisfied. Then groups would go to the lab to prepare to present their findings to the class the next day.

Finally, on the last day of week one, groups presented their final products to the class and it was amazing to see everyone’s work come together. It was a rewarding experience.

Week two was very different as each group focused on a new project. Each project was unique, from doing Laser scans of structures to creating a guide for the Robotic Total Station, to creating a detailed map from every group’s data in the first week. 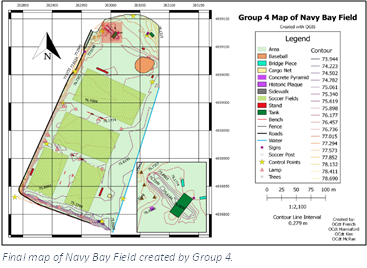 Group four’s task was to produce a photogrammetry-based model creation. They decided to create a three-dimensional model of the Sir John A. MacDonald monument located at the Kingston City Park. The task consisted of taking photos all around the statue as well as taking points with the Leica TS06 plus total station. The program Metashape analyzed the photos and created an accurate, 3D computer model from the photos.

The third-year civil engineering students were able to use these past two weeks to get prepared for the next week, where they will be working for Parks Canada in Kejimkujik National Park. This opportunity for the students allows them to apply the principles of their degree into real-world projects, and partake in similar activities to what most other engineering students do. Most RMC students are never given this sort of opportunity due to the school’s unique training status.

Grad 2019 - Arrival of the Dignitaries at RMC