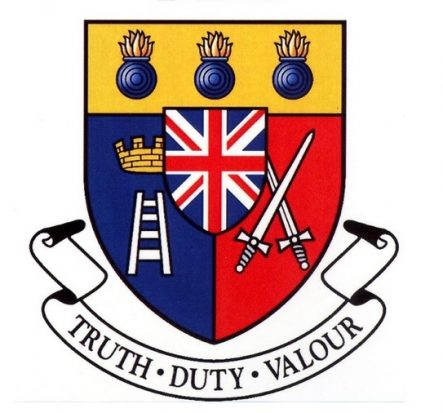 The Arms of RMC

The shield or escutcheon of the RMC coat of arms was designed during the tenure of Colonel E.O. Hewett, the first Commandant, and is the chief element in the coat of arms formally granted to the Royal Military College of Canada by Royal Warrant of H.M. King George V on July 31, 1920.

The artistic merit of the RMC shield is high: the colours and images are bold, yet finely balanced. The symbolism is classically heraldic – an expression of origins in the days of the British Empire, and a statement of aspiration for those whose lives are shaped by the College: the bursting grenades for military action, crossed swords for resolute purpose, and the scaling ladder topped by the mural crown for boldness, perseverance and achievement (in Roman times, a crown made to imitate a battlement was given to the first soldier to mount the wall of a besieged city).

The placement of the Union Badge in the RMC shield in not incidental. Such placement – superimposed on the armorial design – is called an augmentation of honour. It is a mark of high distinction and special favour. The only other coat of arms accorded the entitlement of the Union Badge as an augmentation of honour belongs to the Duke of Wellington. This rare honour was bestowed upon the first Duke of Wellington in recognition of his services to the Crown in the Napoleonic Wars, most especially at Waterloo.

The “crest” above the RMC coat of arms was designed by Colonel Hewett himself. He intended “a mailed arm bearing a maple leaf” to symbolize the relation of the RMC cadets to their country. He also selected the College motto – Truth, Duty, Valour – as a fitting sentiment for the military college and a standard proper to the life of a military officer.

Today, on hundred and twenty-six years after the establishment of the RMC, the coat of arms is the college’s most distinguished sign of pedigree, its badge of authenticity and a continuing admonition to each generation of staff, cadets, students, graduates, and ex-cadets to keep faith with the abiding virtues of truth, duty, and valour. It links the generations, continues to be a rare honour and distinction conferred on the Royal Military College by the hand of a king, and remains a living part of Canada’s military and cultural inheritance.

Coats of arms are visual symbols which reflect the beliefs, aspirations and history of individuals or of groups.

“The traditions and customs of College have grown out of a history which extends back to the year 1876. Tradition serves progress, for it guides and urges as well as protects…”

The Foundation: Meet the Brain Trust