An exceptional baseball player, the handsome blue eyed blond 17 year old from Wilson, Connecticut was being scouted by the Chicago Cubs. He was good, very good, a natural athlete. But it was 1943 and four months after his 18th Birthday, the promising athlete found himself drafted by another team—the rapidly expanding post Pearl Harbor Army of the United States. He was drafted into the Army in August 1943.

Soon afterward he reported to the induction Center and began the process of becoming a solider in the growing U. S. Army that would contribute to the defeat of the German, Imperial Japanese and Italian Armies in World War II. His older brother who had enlisted in the Connecticut National Guard in 1939 had been brought to active Federal service in February of 1941 and was now an infantry staff sergeant serving in the 43rd Infantry Division in the South Pacific.

Shortly after induction and initial processing he eventually found himself engaged in his first training as a new soldier.  He would train with the 42nd Infantry Division in the United States specializing as a machine gunner.  He would eventually be part of a levy of soldiers drawn from that unit to fill deploying units.

He would ultimately be assigned to the 313th Infantry Regiment, one of the three regiments of the 79th Infantry Division, a formation that had seen combat in World War I, the Division’s Cross of Lorraine device a legacy of the service in France.  The regiment had been activated from the Reserve in Baltimore in June 1942. 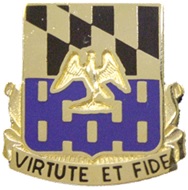 The division had been brought back to active status as well in 1942 with cadre reporting to Camp Pickett, Virginia to begin intake of national service soldiers arriving from the induction centers and other training centers.  Camp Pickett would be the start point for an odyssey of the better part of a year of individual and collective training to formation level in major maneuvers from Camp Pickett to Camp Blanding Florida, Camp Forrest, Tennessee, Camp Laguna, Arizona, Camp Philips, Kansas, and Camp Myles Standish, Massachusetts.  Notable were Desert Training and Desert Maneuvers and the participation in the Tennessee Maneuvers of 1943.

The 313th Infantry embarked in April 1944 aboard the British troopship SS Strathmore.  As a civilian passenger liner, the 13th largest in the world at the onset of the war, the ship’s pre-war capacity had been 1,500 passengers and crew but as a troop ship 6,000 troops and crew were embarked.

On reaching the British Isles the Strathmore docked in Glasgow, Scotland and disembarked the regiment.  The regiment would be garrisoned at Northwick.

Aggressive further training of the 79th Division’s units would follow during the stay in the British Isles.   On 12-14 June 1944, the 79th Division would enter France over Utah Beach in Normandy. The athlete from Connecticut, now infantryman, was following the path of his cannoneer older brother’s 1st Infantry Division that had made the assault landing on 6 June.

The Division…“entered combat 19 June 1944, with an attack on the high ground west and northwest of Valognes and high ground south of Cherbourg. The division took Fort du Roule after a heavy engagement and entered Cherbourg, 25 June. It held a defensive line at the Ollonde River until 2 July 1944 and then returned to the offensive, taking La Haye du Puits in house-to-house fighting, 8 July. On 26 July, the 79th attacked across the Ay River, took Lessay, crossed the Sarthe River and entered Le Mans, 8 August, meeting only light resistance. The advance continued across the Seine, 19 August. Heavy German counterattacks were repelled, 22–27 August, and the division reached the Therain River, 31 August. Moving swiftly to the Franco–Belgian frontier near St. Amand (east of Lille), the division was then moved to XV Corps in eastern France, where it encountered heavy resistance in taking Charmes in street fighting, 12 September. The 79th cut across the Moselle and Meurthe Rivers, 13–23 September, cleared the Forêt de Parroy in a severe engagement, 28 September–9 October, and attacked to gain high ground east of Emberménil, 14–23 October, when it was relieved, 24 October.

After rest and training at Lunéville, the division returned to combat with an attack from the MignevineMontiguy area, 13 November 1944, which carried it across the Vezouse and Moder Rivers, 18 November–10 December, through Haguenau in spite of determined enemy resistance, and into the Siegfried Line, 17–20 December. The division held a defensive line along the Lauter River, at Wissembourg from 20 December 1944 until 2 January 1945, when it withdrew to Maginot Line defenses. The German attempt to establish a bridgehead west of the Rhine at Gambsheim resulted in furious fighting. The 79th beat off German attacks at Hatten and Rittershoffen in an 11-day battle before withdrawing to new defensive positions south of Haguenau on the Moder River, 19 January 1945. The division remained on the defensive along the Moder until 6 February 1945. During February and March 1945, the division mopped up German resistance, returned to offensive combat, 24 March 1945, crossed the Rhine, drove across the Rhine-Herne Canal, 7 April, secured the north bank of the Ruhr and took part in clearing the Ruhr Pocket until 13 April. The division then went on occupation duty, in the Dortmund, Sudetenland, and Bavarian areas successively…”

Hank Rozman experienced much of the worst that sustained combat had to offer.  He witnessed the death of fellow soldiers and the enemy.  He saw his friends die.  He was also separated from his unit twice.  The following exert from the January 1945 Windsor Newsletter captures the experience in a World War II public consumption form.

“Pvt. Henry Rozman, 19, son of Mr. and Mrs. William Rozman of 67 Olga Avenue, Wilson, has been reported missing in action since January 3, according to a telegram received by his parents.  Pvt. Rozman is the youngest of  three sons in the service. He was awarded the Purple Heart for wounds received at St. Lo.  He saw action at  Cherbourg and participated in the D-Day invasion in June.  He was reported missing once before, but was later picked up by a tank division.  Surrounded by Germans he hid for five days and escaped finally by crawling to safety on his stomach.  When rescued by the tank unit he was given dry clothing and food.  He was inside the tank during a bombing but escaped unhurt.  He finally returned to his own unit.

In a letter, dated Dec. 3, Pvt. Rozman mentioned getting wounded, but said that he was getting the newsletter and was back with his outfit.  His outfit was the first to cross the Seine River.”

The armored unit that Hank was liberated by was part of the 5th Armored Division.   Hank returned to the states with the 79th Infantry Division arriving in New York on 10 December 1945.  The Division inactivated on 11 December. 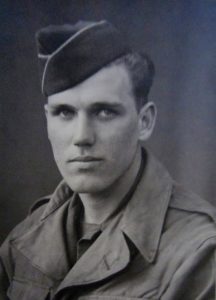 A few months after returning to the states Hank Rozman was discharged from the active Army in January 1945.  He was a well decorated combat veteran having been awarded the Combat Infantryman’s Badge, the Bronze Star, The Purple Heart and Good Conduct Medals and the American Campaign, North African and European Theater Campaign and the World War II Victory Service Medals. 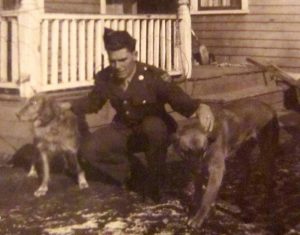 Not too long after demobilization he enlisted in the Connecticut National Guard rising rapidly in rank–by 1948 a staff sergeant in the S-4 Office (Supply and Logistics) of 2nd Battalion, 169th Infantry Regiment. When the unit mobilized for active service in October 1950 for the Korean War, he had been promoted to sergeant first class. 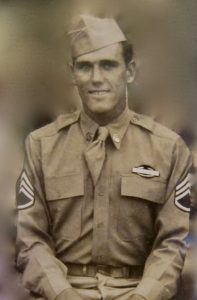 He did not deploy with the regiment to Germany.  He separated from the Army in 1951. 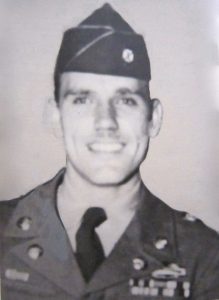 He remained an avid sportsman through his later adult life becoming a very competitive amateur skier winning many events in the Northeast United States.  A superb golfer he pursued that sport as well and was an accomplished hunter.

As many soldiers of that era did, Hank Rozman became a very heavy smoker, cigarettes and cigars.  In time, the habits made their claims and by his late 60s he was compromised by emphysema, requiring oxygen to breath.

Marrying late in life, he and his wife relocated to Arizona to experience the cleaner desert air hoping to reduce the effects of his condition.  The condition claimed him earlier than might have been the case in 1995—his brothers all continuing long afterward.  In many ways his later life was haunted by his service experience.

Henry Rozman, a young athlete of great promise, a sunny young teenager, like millions of other young men in North America was called to military duty by his country shortly after his 18th birthday.  The call derailed what might have been a very promising professional athletic career.  But he met the call.  He served through some of the heaviest fighting in France, Belgium and Germany during World War II and survived.

But a very different young man returned home from the experience.  The light hearted pre-war teenager was no more.  A seasoned combat veteran had taken his place with all of what that meant.

Throughout my life I have reflected on my uncle’s life experience, he could be a rough fellow at times.  The reflection has been that many serve perhaps in ways at great disadvantage personally, yet soldier well.  But they pay a price, most notably those who serve in the combat arms at the point of the spear.  In this sense their life example is valuable to any leader in their leader development—it humanizes what it means to serve and the costs some pay in meeting their service obligation.  It tempers our approach to being a leader and understanding those we are responsible to lead.