On reflection over some significant number of years, sometimes an event that at the time may have been significant but not felt to be of great consequence comes into a more complete perspective.  In a long career oriented on leadership in its many forms, especially the exercise of leadership, one such situation that perhaps played a significant role in orienting someone on a leadership focused career comes to mind.  It had to do with a military community contest and award made to winning community members in Germany.  From the standpoint of the award recipient the development was made possible by his father’s assignment to the 1st Battle Group, 30th Infantry. A key aspect of the award event was the role of the commander of the battle group.

An Army family had relocated to Schweinfurt Germany from Manchester, Connecticut the previous June.  The family head was an infantry major who had been previously assigned to the U.S. 1st Army at Ft. Devens, Massachusetts serving as a senior active Army advisor to the 1st and 2nd Battalions of the 101st Infantry Regiment and as the first advisor to the newly formed 126th Signal Battalion, units of the 26th Infantry Division, a Massachusetts Army National Guard formation.

The major had purchased a house in Manchester prior to deploying to Viet Nam for a year, his family residing in the new house during his absence.  The family continued living in the Manchester house the following four months after his return while he was on temporary duty at Ft. Benning, Georgia at the U. S. Army Infantry School to attend the Infantry Officer Advanced Course.  Half way through his following assignment with the 1st Army, the major had moved the family for a year and a half into Navy quarters near Hingham Naval Ammunition Depot, Hingham, Massachusetts.

This move allowed the major to be closer to Boston where the units he was working with had their armories and Camp Edwards on Cape Cod where the units did their active summer training.  During the time the family was in Navy quarters the major rented the Manchester house to the battalion commander, 2nd Battalion, 55th Air Defense Artillery.  Defending the huge and strategically vital aerospace industrial complex in the Hartford Area was an Army mission of vital national importance at the time.

On arrival in Schweinfurt, the major reported as a staff major to the 1st Battle Group, 30th Infantry, 3rd Infantry Division.  The division had recently reorganized from the three regiment triangular divisional organization, essentially the divisional organization of World War II and the Korean War, to the five battle group Pentomic Organization.   Each battle group had five maneuver companies and supporting companies.

The battle group commander was then Colonel William E. DePuy. Colonel DePuy was also the task group commander, the group including the 38th Infantry and a tank battalion that were also garrisoned in Schweinfurt.   By today’s standards, this was a large brigade size force of thirteen maneuver companies.

The infantry units, in addition to reorganizing into battle groups of five infantry companies and headquarters and supporting companies, were also reorganizing as mechanized infantry units receiving and training with their newly issued M113 armored personnel carriers.  There were other non-divisional units assigned to the garrison such as an artillery unit equipped with the M65 280mm cannon capable of firing a nuclear device.

In this environment of constant field work and reorganization, during one stretch the units spent four months continuously in the field, existed a sizeable associated military community of the dependent family members, department of defense civilian staff to include Department of Defense Dependent School personnel and their families.  As well at the time, the European Command was experiencing a period of fiscal challenge and budgets were tight.  Every possible means was being identified to conserve resources and reduce expenditures to operate within severely reduced budgets.

The Schweinfurt sub-post community command determined among its conservation oriented initiatives to conduct a poster contest.  The contest developed eight months after the family arrived in the Schweinfurt sub-post community.  Its intent was to engage the youth of the community in the developing conservation programs and initiatives.  As such the 1st-9th grade school located in the garrison military community, and groups such as the Boy Scout and Girl Scout units organized in the community, were solicited for submissions to compete for the award.  The award was an honorary place and membership on the Schweinfurt Sub-post Utility Conservation Council.

Finalists selected from among the submissions were interviewed by a panel of community command officers assembled in the 1st Battle Group, 30th Infantry’s conference room at Ledward Barracks, previously a pre-WWII German Army barracks.  Significantly, Colonel DePuy was a member of the interviewing panel.

The major’s son, by then an eight year participant in the scout movement, had transitioned from the Boy Scouts to the Explorer Scouts Program on arrival in the Schweinfurt Community.  He had responded to the call for submissions and was selected as a finalist and was interviewed by the panel. 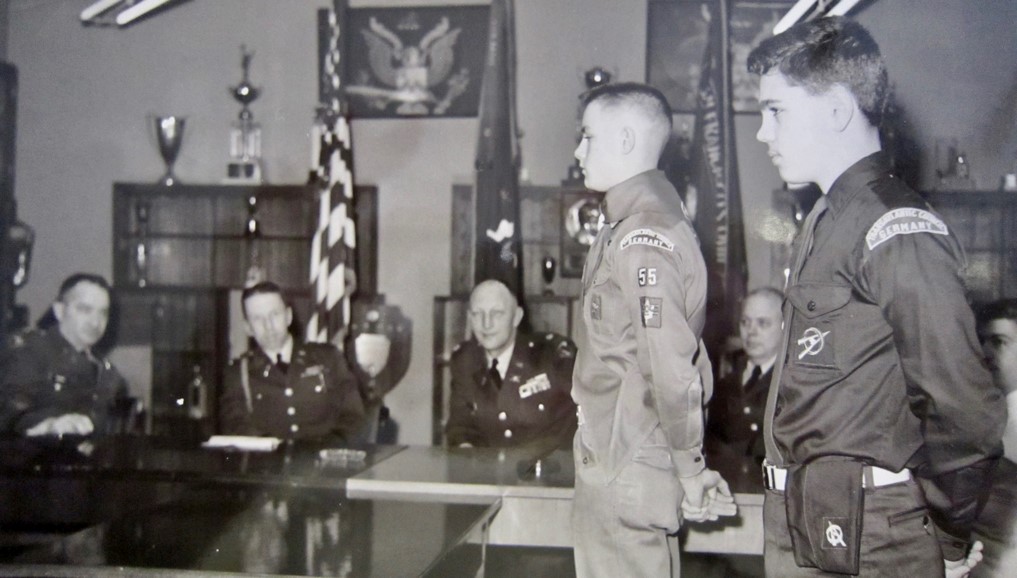 Several days after the interviews, the major’s son was notified that his submission was one of those that would receive an award. The participation in the project and selection as an awardee apparently had an effect on the then 15 year old major’s son and explorer scout. 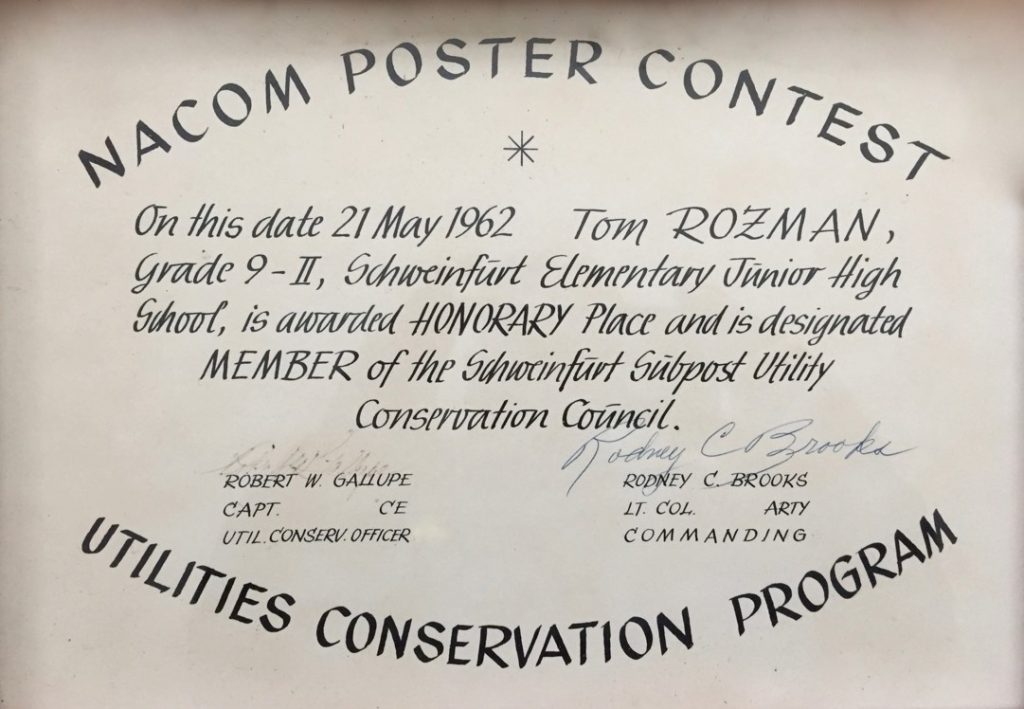 As well, there was the influence of an even-then legendary Army leader, Colonel William DePuy.  The then-colonel had enlisted in the South Dakota National Guard in 1936 serving in the 109th Engineer Battalion, 34th Division rising to corporal before commissioning as a 2nd lieutenant in 1941 from the Reserve Officer Training Corps on graduation form South Dakota State College.

The colonel subsequently served in the 20th Infantry Regiment, 6th Division and the 357th Infantry Regiment, 90th Infantry Division.  By the end of WWII the colonel was a 26 year old lieutenant colonel who had commanded a battalion and distinguished himself in the 357th Infantry in combat and served as the 90th Infantry Division G-3 (plans, operations and training officer).  Among his WWII decorations he had been awarded the Distinguished Service Cross and three Silver Star Medals for bravery and gallantry in action as well as two Purple Heart Medals.

He would go on to duty at Department of the Army, with the CIA in China, with the military mission in Hungary and back to Germany where he would again command at battalion, 2nd Battalion, 8th Infantry, 4th Infantry Division subsequently again commanding tactically with the battle group in Schweinfurt.

The major’s son, shortly after arriving in the community became the DePuy Family’s baby sitter.  As such and at the then popular after church buffets at the officer’s club, he came into contact with the colonel frequently enough to take note of the officer as much as a 15 year old might. The impression was apparently significant in the event from the standpoint of aspiring to military service and serving as a leader.  From the experience of interfacing with the colonel and his exposure to the Army through his father’s career, the 15 year old was inspired to pursue a service career, and as was the case with both influencing officers, ultimately as an infantry officer.

The colonel would continue in his service career until his retirement in 1977.  He would rise to full general with tours in Viet Nam, in one commanding the 1st Infantry Division.  As a full general he would be assigned as the first commander of the U. S. Army Training and Doctrine Command leading much of the Army’s effort in one of its most significant and successful modernizations and reorganizations.

The major’s son would interface with the colonel in his later capacities several times over the years.  The first of these would be at the Military Academy as a 1st Class U. S. Cadet and when the colonel was a lieutenant general.  Another would be when as an escort officer for then Brigadier General Paul Gorman at Ft. Benning when General Gorman was briefing his commander, General DePuy, U. S. Army Training and Doctrine Commander at the U. S. Army Infantry Board on developmental progress on the MILES (Multiple Laser Integrated Engagement System).  MILES was a technology that would revolutionize U. S. Army force on force training in the 1980s when it was ultimately deployed to the National Training Center at Ft. Irwin, California. 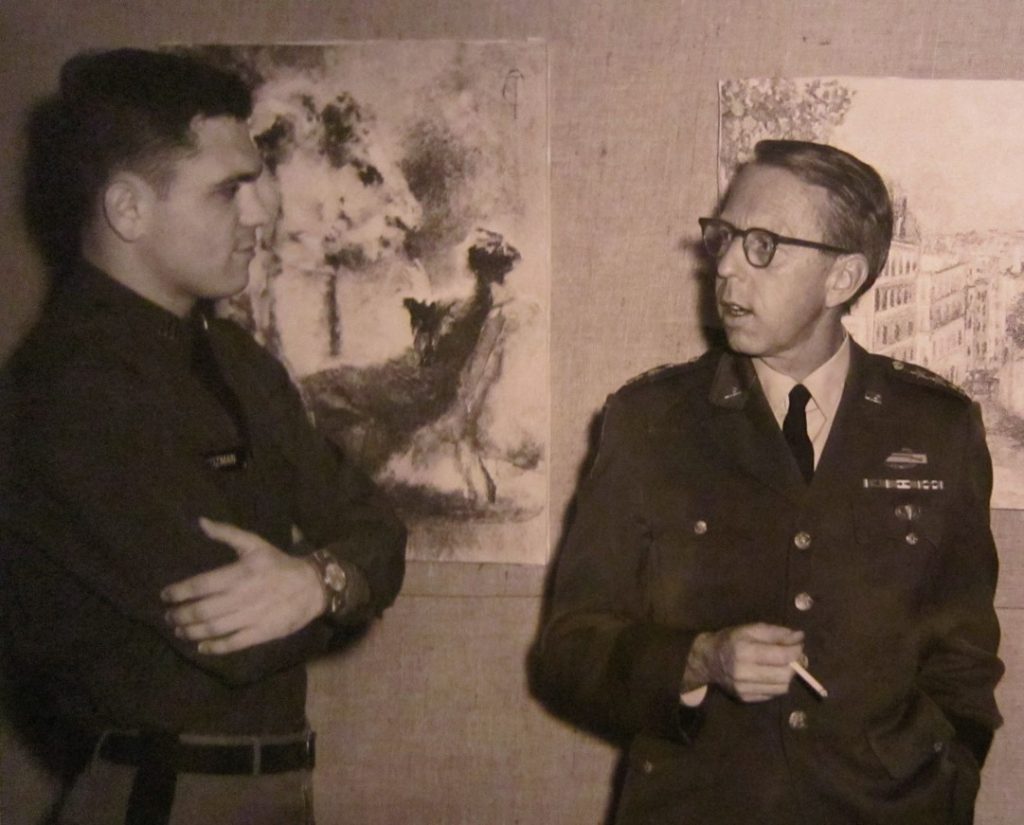 The major’s son would last interface with the general the several times the general was briefed on developments of the Department of the Army‘s Armored Family of Vehicles Task Force.  The general, now retired, was being briefed in his capacity as a member of the senior officer executive review board from 1986-89.

The effect of a leader of the stature of Colonel then General DePuy on a 15 year old and subsequently older young man is difficult to quantify.  But events would seem to argue that the major’s son was affected and inspired by this distinguished officer.  The major’s son would serve a long Army career as an officer then continue in service with the State of Virginia in leadership roles.   In a way, this was a legacy of the general and the major.

Many readers have learned this truism of a leader serving as an example to leaders of tomorrow.  A leader of the moment may be a deciding inspiration to the younger generation to seek leadership roles and persevere against the challenges of such leadership pursuit.   It is also a reminder to all leaders that they are such an important role model in this regard that they should always consider their conduct in that light. 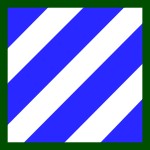