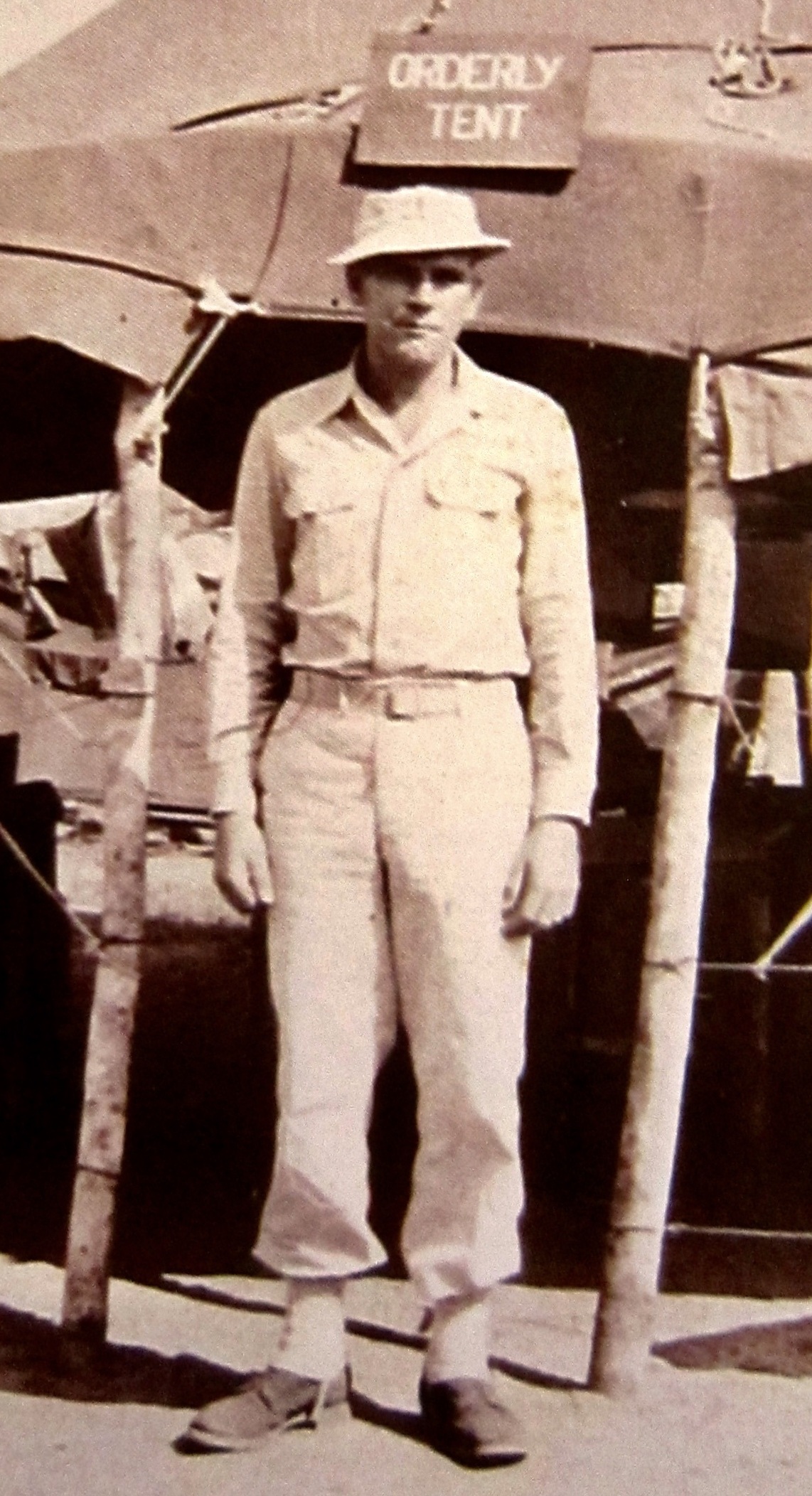 The orderly tent of Company F, 2nd Battalion, 169th Infantry Regiment at Aitape, Papua, New Guinea about the time of the Driniumor River Operation–Operation Persecution. The soldier standing at the entrance to the tent is then company First Sergeant Robert W. Rozman.

The following vignette considers how senior and tactical leadership met a particularly tough leadership challenge. The enemy, the terrain and the climate would sorely test leadership in the situation that developed.
***********************

The battalion had entered the South Pacific Theater in the early summer of 1942 in response to Imperial Japanese movement into the Solomon Islands.  Its initial introduction to tactical operations had been as part of a relieving force on Guadalcanal where it patrolled the island’s ridges to locate and ferret out any stay behind Japanese troops.  It had then experienced several following assault landings and very heavy combat operations suffering significant losses.  The fighting on New Georgia to seize Munda Airstrip particularly had taken a toll.

The battalion had been refitting in New Zealand after the New Georgia operations. The refit had been cut short in response to a developing situation hundreds of miles further north.  The battalion and its parent regiment and division had been sped north as a “fire brigade” to help stabilize a desperate situation on a major island, New Guinea.

An earlier Japanese initiative had attempted to seize a key objective and threaten  Australia. The Japanese field army conducting this operation had been repulsed.  Developments over months had taken a turn and were shaping in a direction that could allow the allied forces to destroy or seriously damage this Japanese field army on the island.

The Japanese army had initially been attacking west and south to seize Port Moresby as a possible jump off point to Northern Australia.  It had met more resistance than it had expected.  Its attacks had been defeated.  The Japanese area army commanding the field army had ordered that army to withdraw westward along the island’s north coast to consolidate Japanese forces on the western end of the island for a better defensive posture.

The army was now moving westward as instructed along the north coast of the island in the direction from which it had come.  It was struggling westward on the north slope of a high east west island mountain chain. A cordon to contain its eastward movement had been established farther up the island along a mountain river—the Driniumor.  The cordon ran along the east shore of the riverbed that extended from the island’s north coast south up into the Torricelli Mountains with elevations up to 1,420 meters.  The intent was to contain the army and cut it off from any effective line of communication thus isolating it, reducing it to ineffectiveness, and ultimately destroying it.

The cordon action did contain the already weakened army even after sustained desperate attacks to break through. The army was subjected to continued attack from the south and east, air attack and worse, the debilitating effects of the terrain and climate with virtually no resupply.  The army was in a continually weakening situation due to starvation and disease.

The diverted regiment being rushed north by sea was intended to provide additional combat forces to the cordon force of two regiments, assuring the sealing off of the Japanese units from westerly movement or infiltration. As well, and as would soon be demonstrated, it would support any other operations that would be deemed necessary to further reduce the Japanese army.

In the above latter regard, at the height of the army’s desperate efforts to break through the cordon, an operation developed as a supplement to the cordon.  The operation would send three battalions east and forward of the cordon, one from the regiment, the 2nd Battalion, and two from another regiment—a force deployed as a sort of reconnaissance in force/search and destroy maneuver and a pinning force to create a larger concentration of enemy to attack and destroy.  The idea was that it would locate and draw out concentrations of Japanese troops now difficult to find in the valleys of the heavily ridged and jungle covered terrain of the ridges of northern lower slopes of the northern mountain rampart.

The remnant Japanese units hiding in the thick jungle that provided concealment in the valleys and gullies were still giving battle.   By the maneuver mentioned it was hoped that these Japanese elements might be drawn or driven out, located, and concentrated sufficiently to allow available artillery and air attacks to further deplete them. But the regiment’s battalion committed to this operation in the event would be restricted to moving along the ridge tops, a development that would not optimize on this objective.

On arrival off the coast, the regiment disembarked at the base supporting the cordon’s operations and began assuming its reinforcing missions with the cordon force.  Soon, the battalion was moving to the point from which it would debouch from the cordon into the confused area to the south where desperate and deteriorating Japanese units were milling around seeking points along the cordon to infiltrate through.  A sort of seething green hell had been created.  The battalion’s venturing forth in a “seek and destroy” mode as an isolated force had perhaps more risks than benefits.  It some ways it was functioning as bait.

As ordered, the battalions of the force moving forward of the cordon reached their jump off point on the cordon and moved into the no man’s land to the east.  The 2nd Battalion quickly learned that venturing off the ridge tops was not possible.  The Japanese dominated the hollows and would fiercely engage any element of the battalion delving into this green hell.

Even an accidental or inadvertent loss of footing and roll down the slope by a soldier was a death sentence.  Engaging concentrations of Japanese troops with available fires and air was attempted with some effect but increasingly as the battalion moved deeper into the zone, the accuracy of maps and other systems being used to support land navigation and confirmation of location proved less than reliable.

At some point the battalion found itself entirely cut off and isolated.  Resupply was attempted by airdrop with pallets of foodstuffs, water, and munitions being pushed out of overflying C-47 aircraft.  In this case airdrop meant, literally “air drop” without parachutes to better hit the small drop areas on the ridge tops and initial packaging simply exploded rations all over the ridge.

The effect of the drops with the mostly poor knowledge of troop locations on the ground and the limited ability of air crew to see where the troops were, combined to produce a dangerous and in several cases deadly result.  Effectively, the troops on the ground were being “bombed” by their own supplies.  There simply were no drop zones worth the name—only the narrow track of the ridge top, which was like threading a needle for the aircrews.

As well, the condition of some of the dropped resupply after impact was poor to unusable.  Worse, large amounts of the resupply rolled down the steep slopes of the mountain ridges.  Because of the situation, with the Japanese in the low ground, these supplies were lost to the American units and acquired by the Japanese. They could not be recovered.  It would not be long before this situation would degrade the battalion and place it in a condition beginning to mimic aspects of the Japanese units in the valleys.

Sometime during the maneuver, the battalion’s location came into question.  As well, while dealing with a Japanese attack situation, mortar support was requested.  A short round from a battalion fire mission landed on the battalion command group instantly killing 14 men and wounding the commander, who in the situation refused to be carried by already overburdened soldiers and obtained a thick vine staff as a crutch.

He continued to walk and command the battalion, though wounded, eventually walking himself out of the situation with the battalion.  It was determined that the ground the base plates of the mortar had been positioned on was not stable and the base plate had shifted during firing—a further negative effect of being compelled by the situation to remain on the ridge tops.

After a week, including time before and after the mortar mishap, of moving through the green hell east of the cordon, working through the location and navigation challenges, dealing with the Japanese who continued to control the bottoms, even in their weakened state, in some cases improved by the air dropped supplies that rolled down the steep ridge slopes to them, the battalion managed to reenter the cordon.  It did so at the point intended and was able to cause some of the enemy’s elements into a zone that concentrated them enough to allow further damage to surviving Japanese troops.

By this point some 50 soldiers had been killed in action and 80 wounded. Japanese losses estimated at some 1,800.  The enemy had been punished and further weakened but so to had the force sent forward of the cordon.

The operation had been more demanding than expected and had shown somewhat mixed results.  As well, the average soldier was less than clear during the operation concerning what was intended.  The battalion never appeared throughout the operation to be able to bring decisive destructive force to bear on the Japanese in the bottoms.

In the end as the operation wound down, the sense many had was that the concept had been a stretch given terrain and capabilities of the forces available.  It had proven almost to reach too far and fortunately losses were not greater. But it did put additional pressure on the Japanese elements struggling east of the cordon.

Leadership at the American corps level in this situation did show an aggressiveness to engage and degrade the enemy and attempt innovativeness, even when constrained by available force levels.  This is a notable quality of effective and decisive leadership.

The above said, given the ruggedness of the terrain, the still numerous though degraded enemy and how that enemy had already demonstrated that he was using the terrain and the adequacy of the ability to support an operation into the zone east of the cordon, a different course of action may have been applied by leadership.

In the event, the tactical knowledge of the terrain and experience with navigating it that existed was not fully adequate to the task.  Again, the operation may have been a reach too far.   But the strategic and operational imperative was to keep the pressure on the deteriorating Japanese field army, destroying it and securing that northern region of the island, regardless of the tactical challenges, and so the operation had proceeded.

Despite challenges, leadership from corps to battalion had been decisive and the good news was that most of the battalion returned—worn and used, but whole and able to recover.    That said, the operation added to an already veteran battalion’s store of experience that would make it increasingly deadly to its opponents in coming operations.  As well, the effect of the overall operation had reduced the Japanese Army to an ineffective combat force resulting in sufficient control of the island to be able to proceed with following offensives against islands elsewhere in the South Pacific.

It must be noted that the Japanese soldier at this stage of the war, 1944, rarely if ever surrendered.  If an engagement went badly, surviving troops would withdraw back into the jungle but would not surrender.  If an attack failed, surviving soldiers unable to withdraw were likely to take their own lives and not surrender.  The fighting in this action tended to be particularly vicious.