No tribute can do justice to someone who dedicated 37 years of their life to the service of their country, often at the sacrifice of family, friends and health.  Chris’s classmates were quick to respond to the news of his passing with memories of times long past and the positive influence Chris had on many.

Chris Simonds (with one ‘m’ as he had to remind many) was sworn in by his father Colonel Charlie with some of his future classmates at CFB Toronto in August 1976.  (John Fisher).  He had a long and noteworthy military heritage, which was very evident to those who first met him. Note the length of hair in this first day photo provided by Hugh Read, to College standard from the outset (and his signature ‘stash).  Hugh also provided the obstacle course photo (4 Sqn).  He remained in 4 Sqn right up to grad. 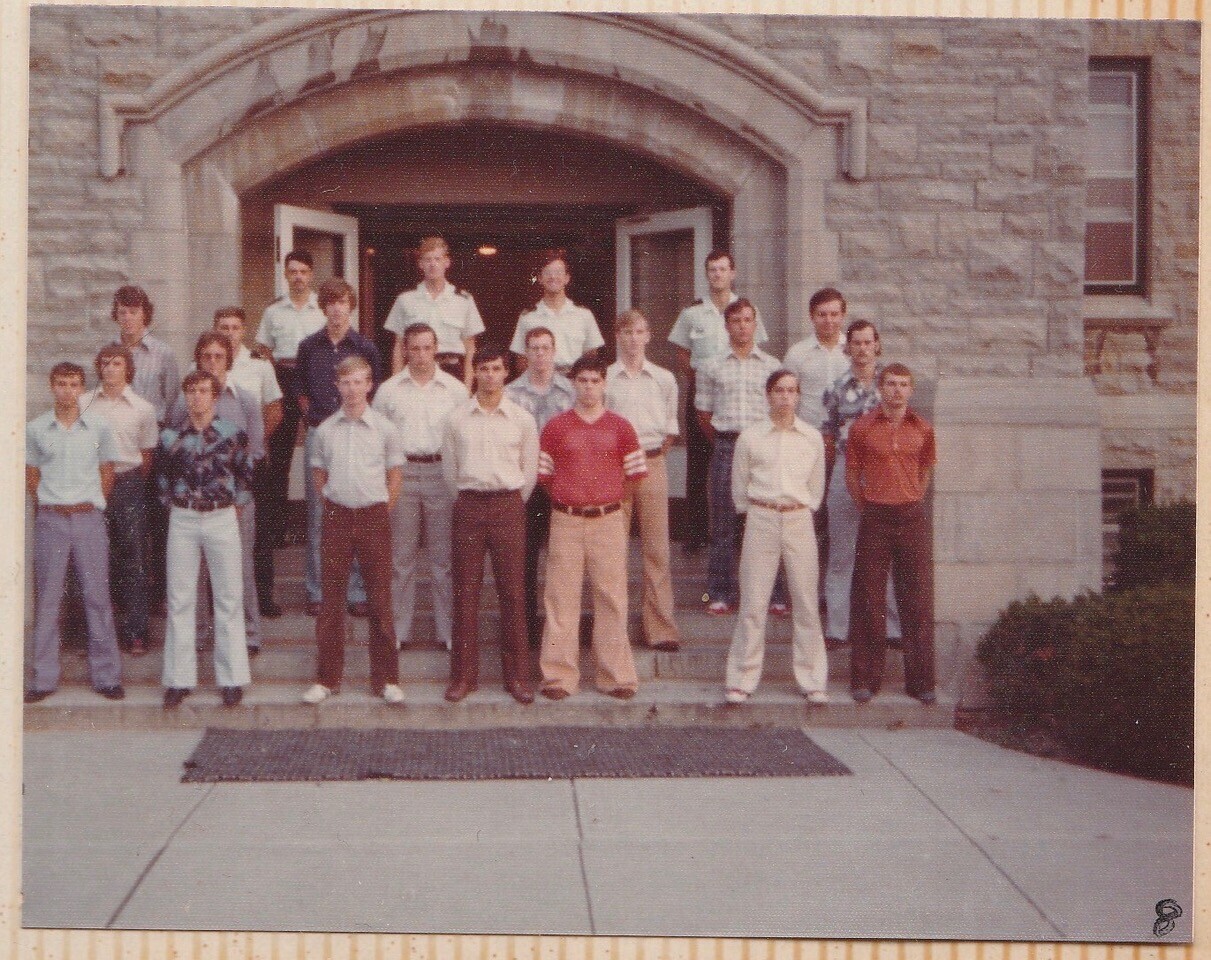 Mike Kennedy has provided a more detailed expose on said lineage (link is below).

“A seventh-generation artilleryman, and a third-generation RMC Cadet”

Lt Chris Simonds completed phase IV Artillery at CFB Gagetown during the summer of 1980.  His first posting was to A Battery, 1RCHA in Lahr where he quickly honed his Artillery and more general subaltern skills.  His service continued for an additional 33 years.  Those that served with Chris within and outside the Army were consistently impressed with his skills and intellect. Chris was indeed a soldier’s soldier. What follows are memories provided by his classmates.

John Jerry.  I was a kid off the street, no cadets, no militia, and there stood Chris across the hall from me in Kilo Flight, 4 Sqn for rook camp. You’d have thought he’d been through the war – walking history book, immense family history and no lack of personal experience. He could be summed up in one word, swagger. Quite the character. Sorry to hear he’s gone too soon. RIP

Fred Lewis.  Sure brought me back to those heady days in Germany. I also took over from Chris in Jerusalem Op PROTEUS in 2009.  He had been running a very good mission but with some sacrifice to his own well being.  Ubique

Peter Greenwood. When I think back to our college days through the mists of time and aging memory, it almost seems unreal, or events that happened to someone else.  But when I remember Wade, JP, and Chris, my memories are sharp and focused.   In each case, I picturing them smiling, at a time when we were all 100 per cent potential with our whole lives before us.  I smell the fresh cut grass on the Navy Bay sports fields, and the chill autumnal air as we clandestinely execute some late night skylark.  I take some small solace in the thought that these memories are life long, and our buds are with us, inside, until the end.  Heads up, and swing along, boys.

Mike Ward. In addition to our time at RMC I remember fondly soldiering alongside Simmer at 4 Brigade in Germany (quite frequently at the Black Forest Officers Mess) and the Army Staff College where Chris was in his professional element directing armies of artillery against the red hordes.  As part of that course, we memorably walked the Second World War Italian battlefields where his grandfather had commanded 1st Canadian Division and subsequently 1st Canadian Corps. We will remember them…

Dan McKeigan.  I recall one New Gym Dance. I joined Chris at one of the tables on the track above. He was using an imaginary sniper rifle to take out those who had crossed him – a distinctly more martial version of “I’m crushing, crushing your head.” Of course with a shot of scotch or whiskey between targets. Eventually, Chris broke the silence “Why are you still sitting here?” “Because you haven’t pulled out your imaginary pistol.”

John Fisher.  Sad news indeed. Chris was a great friend, always with a mischievous twinkle in his eye. For those of us who were sworn-in at the CFB Toronto Officers’ Mess, it was Chris’s father who administered our oaths. In first year, Chris used to sit under his grandfather’s portrait that hung in Baronial Hall. He bore an uncanny resemblance to him. Dave Singleton and I visited Chris at Lahr in the fall of 1981. Years later, I had the pleasure of both Chris and Krista as students, at different times, when I was on staff at the Canadian Forces College, Toronto. TDV, Fish

Harry Hadwin.  That twinkle in his eye is how I will remember him, for I can still picture it.  More sad news.  RIP Simmer!

Hugh Read.  Speaking of fellow recruit members from 4 Sqn here’s some photos with Chris et all on our first day at the college and on the day of the obstacle course (see above).  It’s been quite the journey. Rest in Peace Christopher G Simmonds. 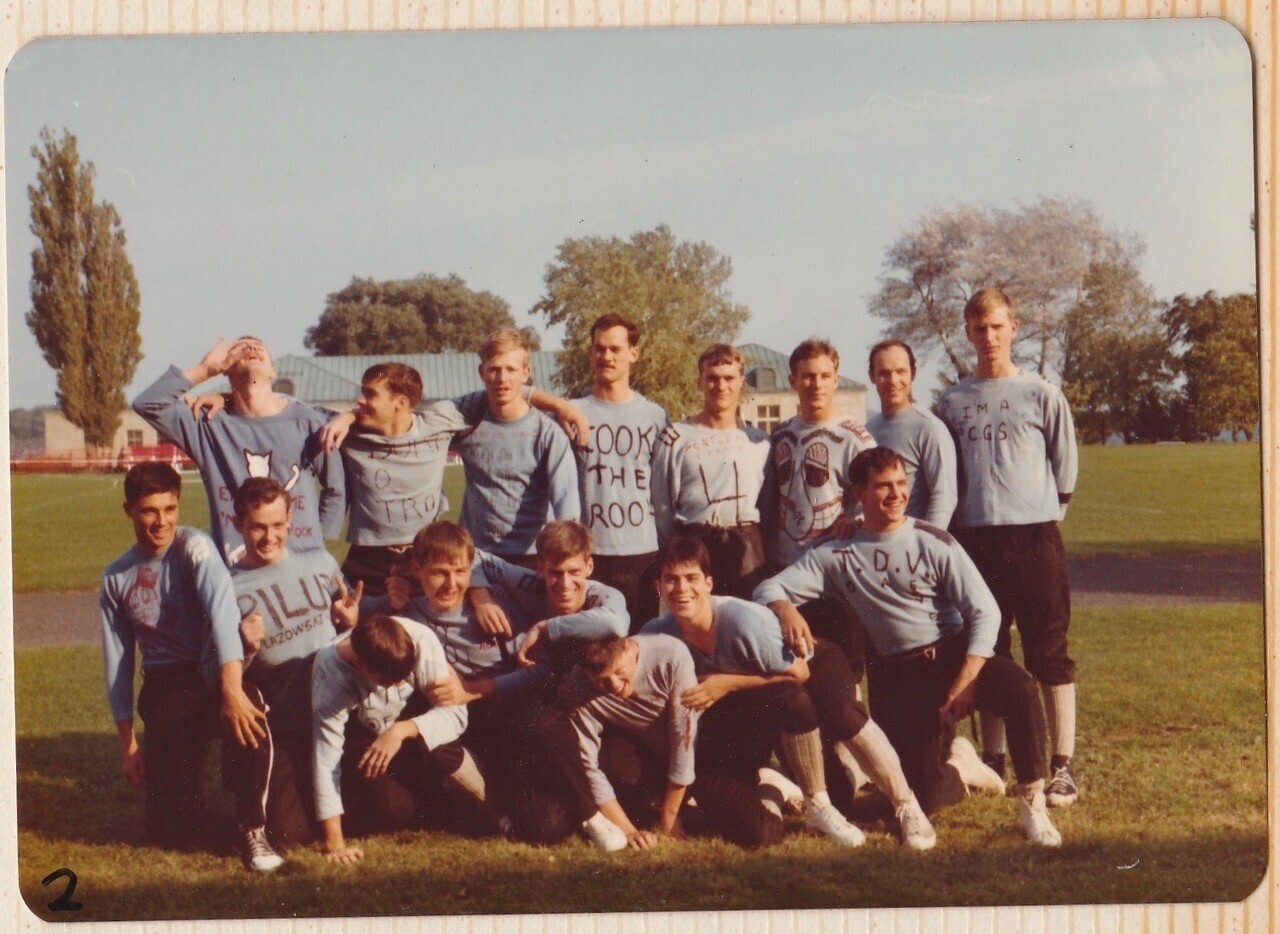 4 Sqn Rook Flight on the day of the Obstacle Course.

Brady Aubin. We all have an extra special connection with our fellow recruit flight members. This loss has hit me hard. RIP Chris. Here are two more recruit flight pics, one from the obstacle course where Chris is helping his less fit buds get over the wall and one at the end of our K flight hall. I guess Chris was the duty cadet that night as he was in uniform. 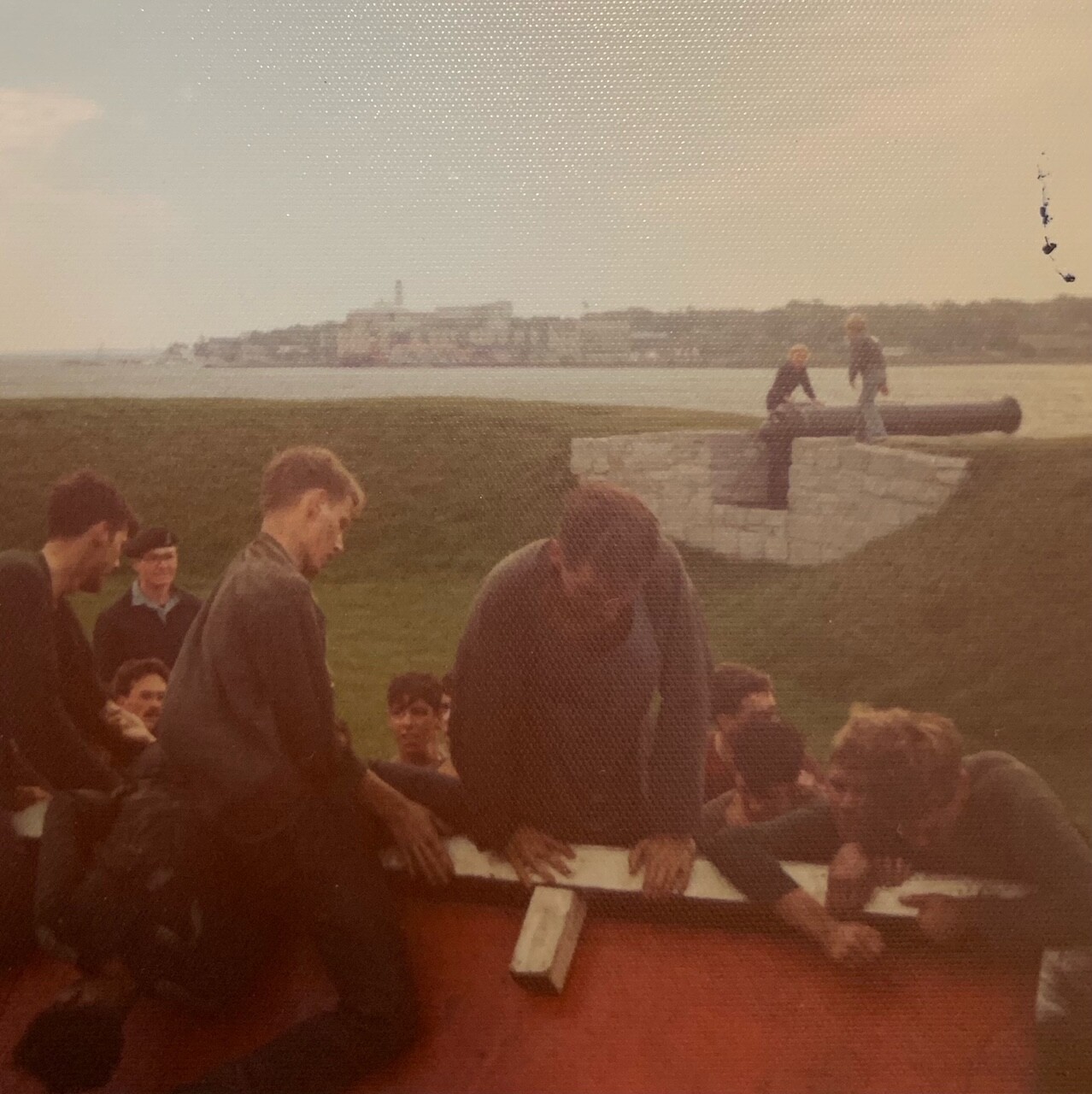 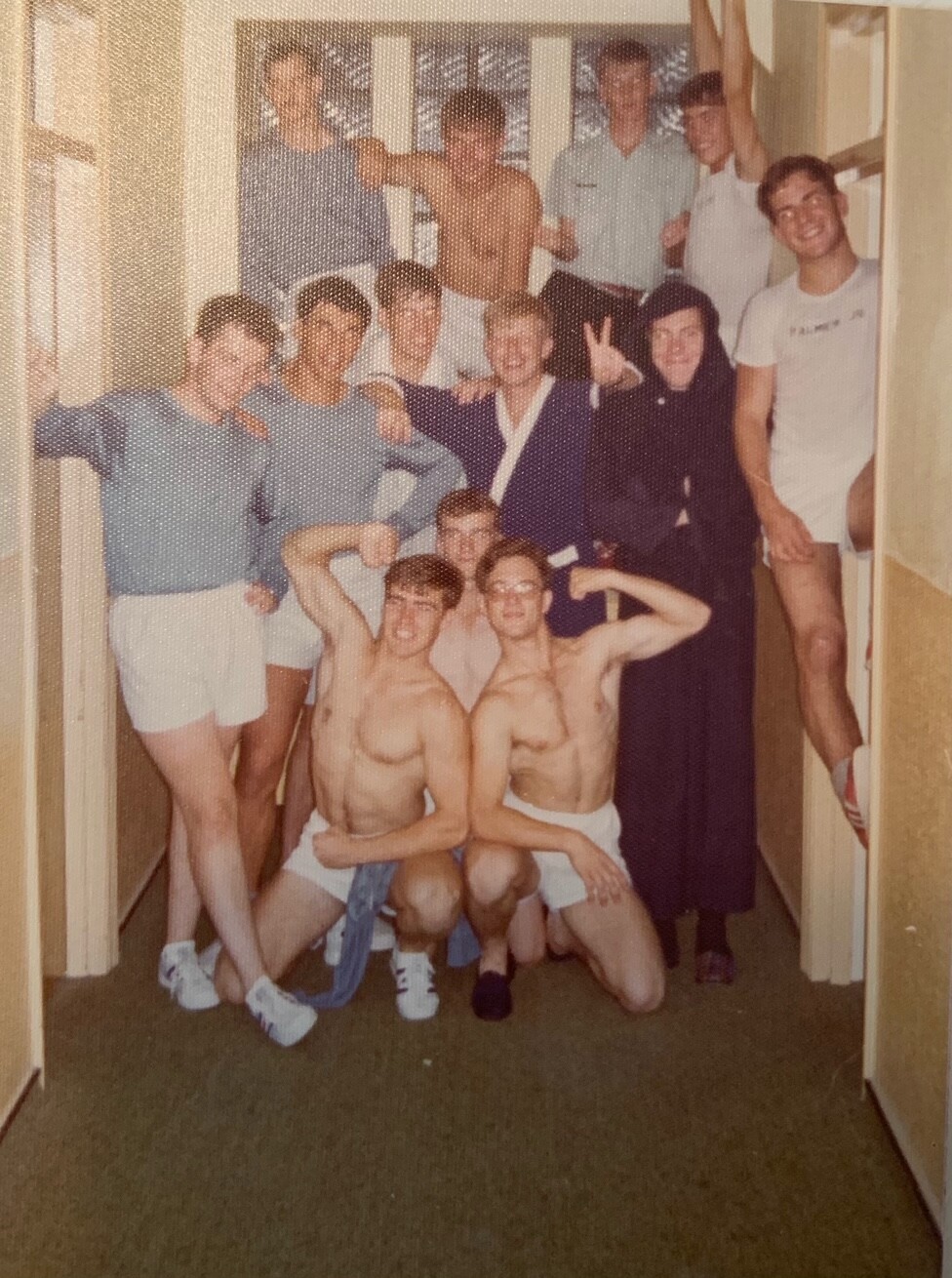 David Barr. Wow. Another classmate leaving us way too soon (along with JP and Wade Rose). Chris and I naturally ran into each other over the years in the Army, but it was during the first year of my 3 and a half years in New York (UNHQ) that we renewed our friendship during his last year as the Military Advisor to our Ambassador to the UN. Very sorry to hear that he has passed.

Mark Eldridge.  Thank you Peter (Greenwood).  Channeling your inner poet, you have reminded us of our duty to those classmates “who have gone before”; that their memory serve as a lead-mark to us; to live our lives with pride in who we are, cherishing the memory of those with whom we have shared the journey, and who have helped shape us into who we are. Aye, Mark

Mike Kennedy.  I am very sorry to receive this news. I believe Chris would have turned 62 last month. We were in different squadrons at RMC but I got to know him in BOTC in the summer of 1977 when we were roommates in the same platoon (Dave was also in our platoon). I lost track of Chris after I left the Canadian Forces following the end of BOTC but ran into him again on Ex-Cadet weekend of 2016 when the Simonds family was at the College for the installation of General Simonds on the Wall of Honour.  He appeared to be in fine health then and we had a cordial discussion, I also met his wife, and a couple of his sons.  Chris was a very dedicated cadet and a fine gentleman who was well respected, and I am sure he will be missed by all who knew him. I can only hope that he did not suffer unduly during his final days.

The following is a list of who contacted me to pass on their condolences:

And I’m sure Al Cook and Andy McQuilkin would send them as well.

I would ask all reading this to reflect on Chris’s contribution to RMC and country and do something that in some small way contributes to his legacy.

“A seventh-generation artilleryman, and a third-generation RMC Cadet” - 12570 Mike Kennedy Reflects on the Service of 12616 Chris Simonds