Editor’s Note: The following recollection was prompted by another Class of 1979 anecdote, The Lucky Tango Trio from Kilo Flight, which can be found here.

Ahhhh!  The Summer of ‘76 in sandy Borden, Ontario.  Memories of brutal heat, poison ivy, long marches, brutal-er QR&Os lectures, “moving-back” junkies, Meaford rappelling, and never-ending leadership exercises float merrily out of my souvenir box from the early days of our RMC military experience.  It was BOTC – the Basic Officer Training Course of 1976 – during which hard-working Drill Staff (DS) like Sergeant “Kool-Kat” Kosowan and Warrant “No Guff” Howe undertook to transform a bunch of mewling and puking RMC babes into mature desert warrior-officers.  Tough job.

The final hurdle for BOTC was called Exercise Papillon – the infamous escape and evasion exercise in which our newly-trained cadets endeavored to evade “enemy” searchers (Drill Staff (DS) – “The Bad”) during a two-day survival trek through the wilds of the Bruce Peninsula.  From the memory box appears a wonderful keepsake photograph which depicts the participants, the locale, and the points of interaction between the forces of good and evil during the exercise.  The heroes (cadets) are divided into 3 groups in this photograph:  those who successfully evaded the bloodhounds are called SAFE (the lucky); those who were pulled in by DS nets are called CAPTURED (the not so lucky); and those who evaded capture, but didn’t cross the finish line are called NOT CAPTURED (the lost). 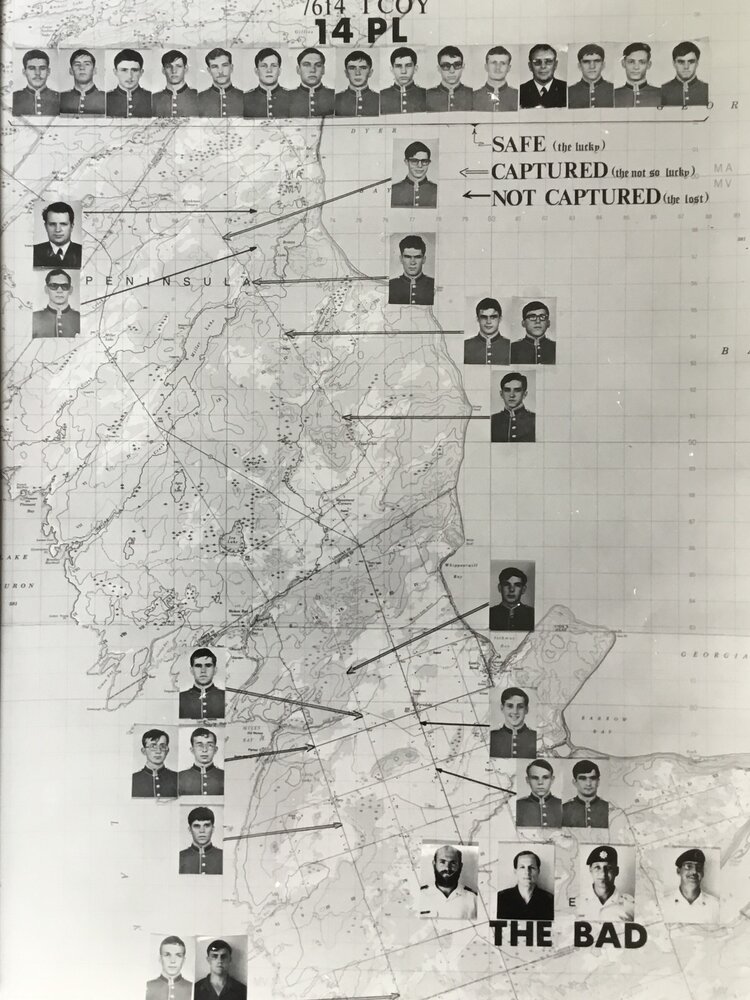 We knew something was up.  It is not every day that “Kool-Cat” yelled at us!  We had been wondering when the renowned Escape Exercise would be unhatched.  This was the night! Well, we really, really knew there was something up when they ordered us to strip and pull on ambiguous coveralls in the dark…  Ex Papillion just started.  We were young officers who had just (like Charles Bronson) escaped from a Prisoner of War camp in a nasty land – far away… and bad dudes would be hunting us down.

Off the bus in threes: boom, boom, Boof! – lonely, little trios of cadet fugitives were plopped along the east-west dividing highway of the Bruce Peninsula in the late afternoon.  Out they were pushed on to the roadside – sacs over their heads!  The vehicle drove away – and out popped three heads – 1, 2, 3.  Copey,  R.J.,  and Animal!  (Rick Cope, Richard Summers, and Pete Avis).  Each one knew what had to be done.  (Looking at each other’s faces, they said nothing … for a moment … then Copey stood up and commanded the situation.  Like a subtle mix of Alec Guinness in Bridge Over the River Kwai and Winnie-the Pooh entering the Forest, he (and his moustache) knew what to do.  He pointed away from the road into the trees and exclaimed, “Into the Breach, lads! – The marshes await us!!!”

R.J., in a decidedly Eeyore fashion, peered into the dusky darkness, slowly cleaned his glasses, and groaned, “Ugghh. Clearly, we should have packed snorkels.  This is pathetic!”  But before we knew it, Copey was trudging briskly into the bush, wielding a large stick overhead.  Animal, known for Tigger-like enthusiasm (with, it must be admitted, little to no forethought), helped R.J. to his feet and shouted, “How exciting is this!!! Come on R.J., RUN!” And off they went towards freedom … or so they hoped.

Copey explained as the trio marched through the brambles, that the best way to stay safe was to disappear (a very Taoist notion) – that is, to stay out of sight of the dastardly DS who would be searching from their jeeps as they travelled the roads that criss-crossed the peninsula.   There was a map and a compass – instruments that would keep the team far from the roads and towns and lead them to the finish line in the distant north!  RJ sighed.

Soon our heroes noticed that the ground grew very wet and their pace slowed dramatically. The ground turned to marshland and soon the bog water was over the top of combat boots and then up to waist-level.  At least the water was warmish…. R.J. slogged forward wondering aloud if the POW camp could possibly be any worse than the mushy, cool, slimy surroundings in which they found themselves.  Were there leaches? … “I hates leaches!”  Animal soon let out a groan of his own – the box of Smarties that he had smuggled with them had become soaked for the water was now up to their breast pockets.  Team morale was drown-proofing… Suddenly, Copey hollered back:  there was higher ground ahead and a dry spot for rest and perchance sleep! His confidence had guided the team through the first major hurdle!

It was dark, the moon was full, and there were no other humans within miles.  Copey had found a safe and comfy “copse” of young maples on a knoll of raised land that would assuredly provide a languorous sleep for five hours or so!  Soggy Smarties and some salty peanuts composed the first evening’s repast.  Fatigue overcame the team and they forgot all about the rule of avoiding laying clothes down on the ground – sleep came fast.

In the early morning, Copey was up first and ready to go.  As Animal reached for his damp socks – he yelled, “It’s a rattler! It’s a rattler!!” (in a distinctly unhelpful way).  The team had just had its formal introduction to the Massasauga Rattlesnake!  RJ calmly grabbed the long hiking stick and flicked the snake away from the sock into the marsh in the direction from which the team had come.  Ever the practical engineer, RJ glanced at his colleagues with a resigned look (and a twinkle in his eye) and said, “I suggest we move-out in the direction which is NOT where the snake is.”

Away the somewhat rattled trio ran, skirting around villages so as not to be seen, keeping to forest and bush when possible to maintain their cloak of invisibility.  Somewhere between Stokes Bay and Monument Corners the forests suddenly turned into wide, open fields which provided a glorious view from one side of the peninsula to the other (Lion’s Head to Stokes Bay).  RJ was so taken, he commenced a dissertation right there in the field focusing on the huge glacial deposits of rocks that had been sifted and dropped by the glaciers millions of years ago.  Politely, but urgently, Copey hurried the team northwards toward the largest rock in the middle of the field – its shadow would be ideal for the team to rest under and to keep out of sight.  The other feature that Animal instantly noted — Highway 6 went right smack-dab up the middle of the peninsula and was a perfect searching platform for the wily DS!

When the team got to the big boulder, they crashed into the shadow and sipped water from their canteens. With all the excellent strategy that was winning the day, Copey had not counted on what turned out to be a very, very important factor.  Out of nowhere, a herd of about forty cows shuffled briskly towards us – apparently seeking the very shade of the boulder that we had inhabited!  Rather than confront our bovine landlords, the decision was made to climb to the top of the boulder and wait them out….

Something was not right.  Ah ha!  There was a DS jeep coming up Highway 6 – and if the trio could see the DS… (wheels turning) … THE DS COULD SEE THEM!  Animal had worked for a summer on a farm – cows were quite friendly animals if you treated them well.  Quickly and together, the team disembarked from the rock and hid in the middle of the cows – as the DS careened northwards in search of other less fortunate members of the BOTC class.  When the DS were gone, the team high-tailed it for the northern tree line.

Copey exhorted his team members to keep running through the night. By dawn, we saw the finish markers along the crossing road. Soon we were picked up and taken to the safe camp for some much-desired brekky!  We had seen poor Donnie Hawco tied to a tree in his underwear on the way in – apparently, the young Cape Bretoner took Kool-Kat’s words to heart:  “If you ever get caught and end up in a POW camp, it is your duty to escape!  And never stop trying!” Donnie had broken his chains three times and counting!  Thank goodness that was avoided.

While the members of Copey’s team were all very different, under his superb leadership, each member was allowed to shine in order to succeed at the Mission! We were SAFE!

Note from the Class of ’79: The Tao of Pooh is actually best seller book written by Benjamin Hoff that was first published in 1982 by Dutton Books. While Pete has used a little bit of poetic license here in terms of timelines, anyone familiar with the book and/or the concepts and A.A. Milne characters will understand where he is coming from!