Pete Avis reached out to me a while back and asked me to spend a moment and provide some thoughts on the CMR and RMC football experience.  Fond memories to say the least.  It was not all dodging parades and trying to purvey a modified standard of dress and deportment both off and on the field….

Just showing up on campus as a football player was a unique experience for a small-town kid from New Brunswick.  At CMR, the locker room had been somewhat ravaged by one of the Montreal Alouettes players, later a CFL Hall of Famer as it turns out. He apparently made them the object of his frustration at the end of their training camp held at CMR just the week before.   On arrival, I was met by Captain Wally Peters, head football coach, and Michigan Wolverine Alumni.  Just a great guy!  I will never forget the time he strapped on his leather and steel helmet and tried to show one of our backs how to run a sweep.  We were bad and he was frustrated.  Oh well, Captain Peters’ broken leg healed in a few months and the young running back turned out to be a fine wide receiver. 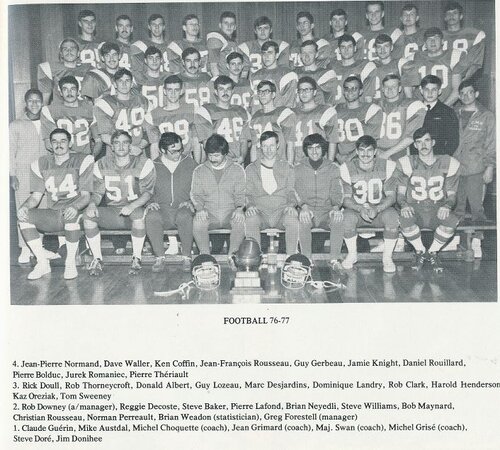 An alleged “benefit” was that the football team rookies ran the obstacle course the night before the rest of the Wing.  I don’t remember the obstacle course so I assume it was not all that tough; but I do recall getting charged for popping a cold one with a few second years that evening.  First cadet to finish the obstacle course and the first in gaiters.  If you’re not first, you’re last — so the saying goes.

The second most vivid memory of CMR football was that of our trainer Bertrand Forcier.  I am not sure how CMR recruited him away from the horse racing stables at Blue Bonnets; but nevertheless, he was ours and we loved him.  In Bert’s world, there was no injury that ice could not cure.  The guy was a gem — not sure he knew what football was all about, but he held us all together with tape, Atomic Balm (generously and sometimes dangerously applied), and Labatt’s Blue.

When Captain Peters moved on, we were lucky enough to secure Major Bob Swann as head coach of the CMR team and with his leadership, some great local coaches, and some obvious recruiting coups, we went on to win our first Bol D’Or (Quebec University Football Championships) at Olympic Stadium.  Being military, and with a mix of anglophones and francophones on the team, we never fared well with the local press.  Throwing one of their sports reporters into the shower after our Bol D’Or win may not have helped.

When I left CMR to join the RMC football team, the experience was somewhat analogous, other than the gaiters and drill squads.  Like day one at CMR, the campus was teaming with a lot of tall, athletic, older looking guys.  It turned out they were the Marine Corps band and Color Guard, housed at the College, in town for the gig at Fort Henry.  My chances of starting just got a lot better. 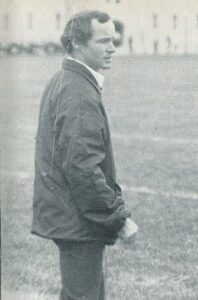 Patty Clayton on the sidelines.

I was met at Six Squadron by my new squad boss and head football coach, Captain John Power.  Within an hour we were on the tennis court, where having played tennis daily in Virginia on a summer exchange posting, I was ready to tune him up and show him what I had.  Well, it did not go well to say the least.  He turned out to be the Forces tennis / squash champ and fresh off a month teaching in the States.  He was likely the most likeable guy on campus — well at least to everyone but the DCdts.  I remember telling Coach that we could not call him John and it was not OK to have a beer fridge in our room.  John turned out to be one of my best friends after college.

I would be remiss not to mention our head physio Pat Clayton.  Like Bert at CMR,  just a stellar guy. Where Bertrand could treat anything with ice, Pat upped the game with cute Queen’s Physio students and great Christmas parties.  A year after we graduated, he went to the Calgary Stampeders and the legend continued.

Like all good things MilCol football ended too soon.  Great guys, great memories, and bonds that will last a lifetime. 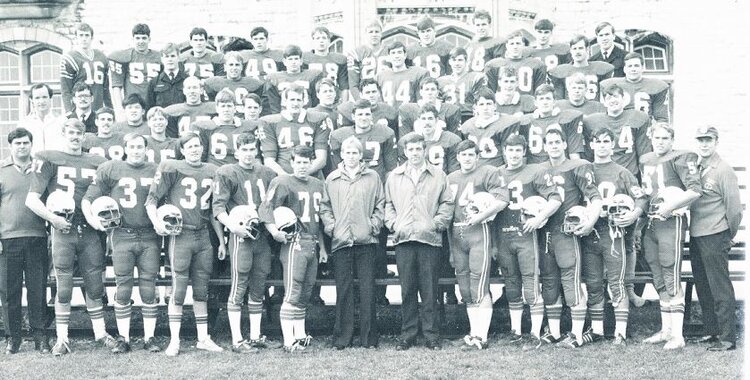