In a Galley Far, Far Away (or: I’d March a Mile for Mystery Meat with Universal Sauce!)

This summer past, the most recent Rook Camp started on the first of August, 2020 with 4th years and recruits quarantining for 14 days — one person per room — meals in rooms – nothing like any earlier recruit entry experience!  By the fifteenth of August, the seniors and their recruits created cohorts of 50 cadets each.  They got on with the usual recruit training, sports, and drill – but something continued to be very different from most other Classes: the Dining Hall in Yeo Hall was closed due to critical renovations. Everyone on the peninsula had to eat at the Senior Staff Mess!  Given all that they had just gone through, no one was happy about this turn of events, except maybe for those in the Frigate who were pretty much right next door to the SSM.

Although most of these recruit experiences had never happened before, another closure of the Yeo Hall had changed recruit life even more dramatically some 45 years ago!  Back in ’75, we had our own dining challenges during recruit camp.  Due to similar critical renovations to the Yeo Hall dining rooms, we had to march all the way over to the Cadet Mess for every meal – yes, and that was over one kilometer away, times two, three times a day and not only that, pretty sure our already crazy busy schedule had not been properly adjusted to account for the extra long march there and back. Bummer. 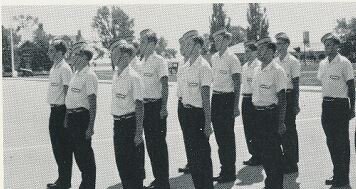 This policy of eating at the distant cadet mess was the bane of our early existence as recruits! While I loved marching, with my arms swinging high up and back, there was a problem. I was inevitably mustered beside Doug Gillespie (Magilla Gorilla!).  We would be so hungry for snacks in the afternoon that all of us carried fruit in our hands as we marched back for our afternoon activities. Unfortunately, Magilla’s magnificent arms swung so widely and far from his torso that they invariably ended up whacking the fruit from my grasp!  The apple or orange would fly through the air, as if in slow motion, and then land with a thud and go rolling down the roadway; and, every time, the cadet senior, usually Mr. Erdman, would halt the Flight.

“Stop doing that!  Alright then, two more circles – go pick it up!!”

Sigh … out with Copey again for the usual eight circles each night at 10pm and even worse, no Kye!  Jeez, what doesn’t kill ya, makes you stronger right?

That wasn’t the only challenge.  All rooks were issued with their very own personal dining cards that fit neatly in the left-hand breast pocket of our CF shirts.  We had to present these cards each mealtime to our serving lady and she would check off the square that corresponded with the date and meal. Normally this was a happy, administrative procedure that allowed us a bit of contact with females that was so lacking during those cloistered months.  One day, probably a Monday because my clothes were all freshly washed and pressed, Mr. Erdman called my name to present my card – Chuck had done his; Snowy, no problem; Mon General Ray, clear sailing … what could go wrong? 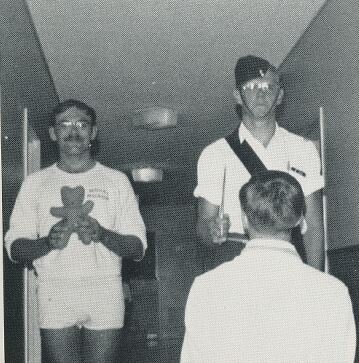 Mr. Erdman in red sash and with sword in hand, along with “Papa” Fletcher, ready to confer upon some unfortunate Brant Rook that infamous “Award.”

I reached into my pocket…I couldn’t feel it in its normal place!  Had I forgotten to put it in that morning? I reached lower and in all corners of my breast pocket.  Aha!   I felt something!  I pulled out what turned out to be a small, tightly-rolled ball of paper … a well-laundered meal card!  Well, I looked up at Miss Munday smiling down at me – she giggled in short burst.  Then, I looked at Mr. Erdman – oh dear, he was neither smiling, nor giggling.

I was quietly thinking how lucky I was that Mr. Erdman was not aware at that very moment that the colour of my underwear and singlets was a distinctive, pale yellow – dyed from a thorough washing in with my Brant Squadron GOLD sports jersey!

Apparently, this particular infraction was far more egregious than something circles could rectify. Later that night, just after circles and just before bed-time, we were all mustered in the “R” Flight hallway, in our underwear (uh … in my case, thankfully not those ones!).  Things were not looking good … Mr. Erdman, also in only gym shorts and red sash, was carrying his sword.  He bade me kneel before him – to which, of course, I complied.  He bestowed on my unworthy recruit soul the dubious honour of being the screw-up of the week and I was given his teddy bear to keep me company while I slept, per chance to unburden my conscience before committing future acts of foolishness.

How happy we were to start up in the normal dining spaces – Universal Sauce on Mystery Meat in the great halls of Yeo in a Galley closer, much closer to home!

A later recipient of the “Award,” “Mon General” Ray Mackley. 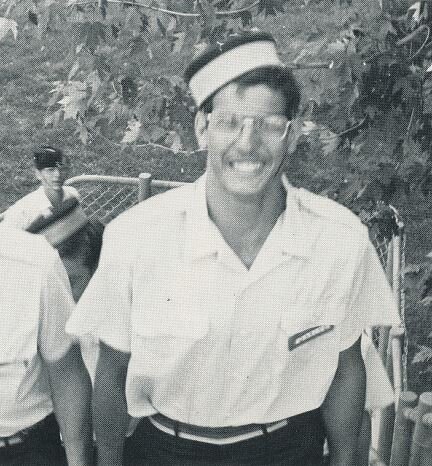 Nick Garito obviously very happy to be heading to the Cadet Mess for Growlies, but first needing to march up and over the Pedestrian Bridge over Highway 2.