At RRMC, during our first year, the second year cadets came up with the bone head idea that a “Pre-BOTC” adventure was just what the first year cadets needed to properly prepare them for BOTC at Borden in the following summer of 1976. One of the exercises was held on Mount Benson, a mountain near Nanaimo, BC about an hour and a half north of Victoria.

The premise was that small groups would gather at the base of Mount Benson and be assigned the mission of transporting a “bomb” to the top of the mountain where a Mad Scientist was waiting to disarm the bomb. Unfortunately for us, gasoline was being “rationed” at the time, so we were not permitted to use vehicles of any kind.

Our group would consist entirely of first year UTPM cadets and, as luck would have it, we were the last group to trek up the mountain late in the afternoon. Now some of the guys were immediately suspicious that what we were being given wasn’t really a bomb, as it looked more like a “ten“ foot log. However, Mike Guerrard and Rick Touchett rightly pointed out that it had to be a bomb as it was clearly marked in both official languages. “The Bomb” on one side and “Le Bomb” on the other side. Nonetheless, all of the Artsmen, namely Don McLeod, Dan McCann, Bob Wasney and Hammey Hamstra still thought it was just a log. The engineers of the group, including John Britten, Mike Guerrard, Jim Hutton, Steve Kelly, Art George, Rick Touchett and myself were convinced it was a bomb. Our applied science guys, Randy Rodgers and Ken Rozelle, weren’t sure one way or the other. As most of us couldn’t speak French at the time, and as Mike and Rick were not only engineers but also bilingual, we came to the conclusion that it must be a bomb in spite of appearances.

Once we determined that it was a bomb Don McLeod was selected as the leader to get us up the mountain. It was a sunny day and we were all in good spirits so off we went singing, “Hi Ho, Hi Ho it’s off to the top of Mount Benson we go”.

After several hours and a good bit of complaining, McLeod finally got us to the top of the mountain. By now the group was in a foul mood and not prepared to play anymore. At the top we were informed that the Mad Scientist had left for the day and that we had to carry “Le Bomb” down the mountain. I was assigned as team leader.  This was my opportunity to show true leadership. Get these “Old Guys” off the mountain safely and return the bomb to its rightful place. An impossible task under the circumstances, as I soon found out!

The weather turned nasty with strong winds, light rain and it was soon dark. Did I mention that the guys were in a foul mood? Halfway down the mountain the mission came to a screeching halt. Randy Rodgers had worked the group into a mutinous bunch!! To demonstrate their point they parked their butts smack dab in the middle of the road and like stubborn mules, refused to go any further. After about ten minutes of this stalemate, someone got the idea to jettison “Le Bomb” over the side of the road. I believe this was McCann but I could be mistaken.  In spite of my pleading, over the bomb went never to be seen again. This was a low point in my career, and I was just starting out.  If this was indicative of my leadership skills, there was no way I would ever make General and turns out I was quite prescient in this regard.

McCann felt obligated to point out that it was all my fault as I had neglected to include any alcohol as part of the rations. Given this omission on my part, surely the group couldn’t be held responsible for their insurrection! 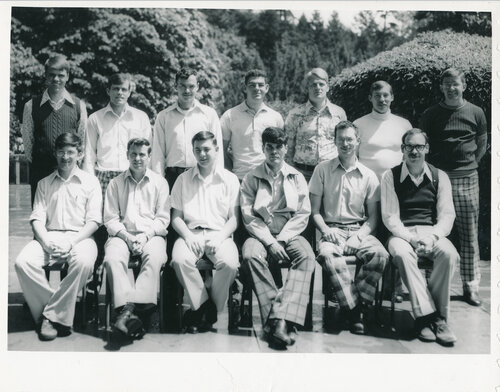 Just as I was about to give up all hope, two specks of lights appeared in the distance. It was the second year Directing Staff (DS), our fellow UTPM classmates, Gary Ross and “Just Call Me Hugh” Downing.  (I guess they must not have gotten the memo about gas rationing). As second year cadets, they displayed impeccable leadership, because they had quickly assessed the situation and produced a fifth of rum which greatly improved morale, particularly with McCann. They relieved me of my command and informed me that this matter would be reported to a higher authority. Higher Authority than second year cadets?! Did that even exist?!

After much deliberation, the DS appointed Randy Rodgers as the new leader. I tried to point out that Randy was the guy who led the mutiny, but in spite of my whining, they blamed the entire debacle on my poor leadership.  Randy’s job was to get us off the mountain.

An hour later we were at base camp without “Le Bomb”.  Our UTPM group was the only one which failed to bring the bomb back. Later that evening at a celebratory bonfire our fellow ROTP classmates brought out their bombs and fed them to the fire. Thankfully, none of them exploded! Unfortunately, the UTPMS were without a bomb. However, the DS informed me that I would not be reported providing I submitted a detailed written report on the entire incident.

I immediately called the group together for a “Wash Up” to discuss what went wrong. Our after action report came to the conclusion that “Le Bomb” should have been jettisoned on the way up Mount Benson and if so, the mutiny would have never occurred. A brilliant observation. As I found out later in my career, it’s hard to argue with logic.