Bobby North is one of those rare people who is almost impossible not to like, mostly because I honestly don’t think he has a mean bone in his body. While he was never what most people would describe as the prototypical military college “type”, he nonetheless came to RMC in 1975 with a certain determination that quickly ingratiated himself with the guys. He was in the 2 Sqn Recruit Flight in Fort Lasalle, just down the hall from our Recruit Flight in 3 Sqn, but during BOTC in the summer of 1976, he was our roommate in the Borden barrack block room in whatever that building’s number was.

Of course, the directing staff was very particular about room inspections, so for example, we had to make sure that the floors were highly polished at all times. We learned early on that the best way to do that was to leave our grey combat boot socks by the door so whenever we entered the room, we would step on the socks in order to make sure we would not leave scuff marks, but also the socks would actually help polish the floor at the same time. 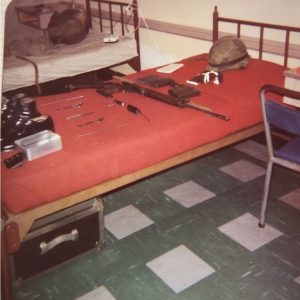 One day, we were scheduled for a room inspection at 0700 hrs. About 15 minutes before the inspection, Bobby shuffles in from the shower on his flip flops, with his thick black-rimmed glasses still fogged up by the steam from the shower and his thread-bare DND-issue towel wrapped tightly around his waist. We were all pretty much dressed in our combats by then, getting ready to stand beside our bunks for the inspection. Obviously, we were getting a little worried about whether Bobby might be able to get dressed in time for the inspection.

Bobby stands in the doorway, slowly adjusts his glasses and calmly asks how much time he has before the inspection and when we tell him “Oh my gosh, only about 10 minutes”, much to our surprise, he says “Oh great, I thought I was going to miss breakfast!”

Bobby actually made it back in time for the inspection, but only because we had frantically helped him make his bed and lay out his rifle, canteen etc on the bed. As luck would have it, the WO literally came in the room as Bobby was adjusting his beret and then proceeded to pick us all apart for one reason or another, but never said boo to Bobby!