With thanks to 12215 Dave Mowat and the Class of 1979. Photos by Dave Mowat unless otherwise noted.

It is amazing how one person can have such a profound impact on not only the Canadian Forces and a country, but to be honest in many parts of the world.

I was serving at CFB Moose Jaw when Terry Fox started his run across Canada on April 12th, 1980. I do not remember all that much about his early journey as the information was a little sketchy at the start. Like most people, I thought that he had bitten off more than he could chew but when he got to Quebec that for me was when I started to think, wow that’s pretty darn good for a guy basically running on one leg. Not only that, but he is putting an incredible number of miles under him every single day, equivalent to a full marathon in some cases! Of course, the rest of Canada was getting quite impressed as well so he was constantly in demand as he moved in to Ontario, so much so that he had to adjust his routing to accommodate the myriad requests. Because he started to be on the news almost every day, I remember him saying, when asking for donations, to never tell him that we could not do that, we could not meet his goal. I thought okay, that is pretty brash, but he has certainly earned the right to challenge us that way.

Later, we were all shocked when on the 1st of September the evening news broke with the story that Terry had had to suspend his run and even more stunned to hear shortly afterwards that the cancer that had taken his leg had returned. Then, and I remember like it was yesterday, Lloyd Robertson had opened a CBC News Special saying that there had been such a sudden and up welling of support across Canada that the news outlets and sponsors of the run had hastily and jointly arranged to hold a Marathon of Hope telethon to raise money to support Terry’s cause as a show of Canada’s appreciation. It was very emotional as the numbers went up and up, as all Canadians came together and donated to Terry’s cause.

The impressive thing about Terry’s run was not only how it brought the country together but how lasting and widespread the Terry Fox Runs have become. While it was not all that surprising that Runs were held in Canada, in every province and territory, what I loved was the fact that the members of the CF took to conducting the Runs while outside Canada. I don’t think I realized how important his run had been outside Canada until they held a run at our Camp in the Golan Heights while serving with the UN. Much to my surprise, troops from many different countries joined the run and indeed actually knew quite a bit about him. Even some of the kids of the soldiers who had been visiting the region joined in. And, sure enough, many guys from our Class have participated in other Runs while deployed.

Pete Avis was deployed with NCSM Ville de Quebec in 1997, as the Executive Officer. They were in the Port of Piraeus, Greece (just outside of Athens) with NATO. They organized a run for the NATO squadron to both show the flag and raise money.

I was so moved when I learned that Terry had to stop his run that I decided to try to put down my thoughts. Later, I tried to rewrite it a few times, but always came back to the original, faults and all, just because that was exactly how I felt at that moment in time. 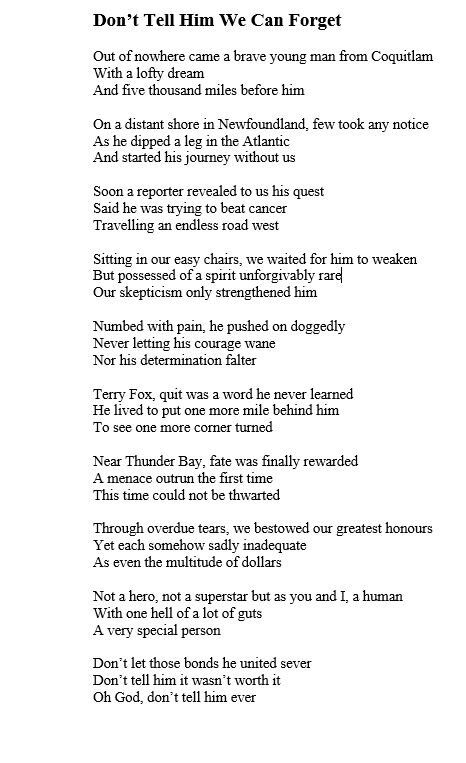 "A Foundation of Strength:" The Class of 2024 Continues Their Journey at RMC / « Une base solide » : La promotion de 2024 poursuit son chemin au CMR