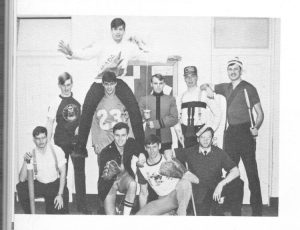 THE TWO CREW – TOM (GIVING PIGGY BACK); KEVIN (WITH SWORD BY TOM); ROB (WITH RAQUET); BOBBY NORTH (BOTTOM LEFT) AND BOB FEHR (WITH JEANS AND GLOVE)

The time was May 1977 – that pleasant twilight period of 2nd year between exams and grad parade when our days were relatively unfilled before we headed off to summer training.  Rob Slinger and I were in his car and heading out.    We had somehow managed to get an evening pass all the way to Ottawa so I could attend my girlfriend’s (later wife’s) graduation ceremony/dinner from business college.   He also had a girlfriend in Ottawa and so offered to drive.

We were not too far down Highway 15 before we were pulled over by a big cop. There had been a bank robbery somewhere in Kingston that afternoon and a dragnet was set on all roads out of town.  The cop walked up to the driver’s window and took a look at the two of us in our 6s and said “You’re not the two we’re looking for.  Be on your way.”  (How Star Wars-ish – “These aren’t the droids we’re looking for.”).

The evening was pleasant and we headed back to the college arriving sometime after midnight.  I was expecting the place to be quiet but such was not the case as idle hands are the devil’s playground. Something was afoot and the centre of activity was my room.

Some background is necessary here to explain.  For second term that year I was sharing a suite of rooms with Bob Fehr on the middle deck of LaSalle.  Our windows looked directly onto the parade square and, more important, right at everyone’s mortal enemy – the Frigate.  The doorway from our room opened onto the long perpendicular hallway on the north side of LaSalle.  (This becomes important later.)  Finally, we had all had our yearly dental exams that week and dental floss had been standard issue.

Someone had come up with a dastardly plan to ring the Frigate bell and escape the consequences by doing so with the almost invisible dental floss strung out across the parade square into my room.  Execution involved feeding the floss out through a hole in the screen and someone (Bob North if I recall correctly) creeping across to the Frigate as spools of floss were reeled out and tied together to span the gap.  (Google Earth tells me this is just shy of 200 yds.)  Eventually the floss was tied to the clapper of the bell and Bob retreated back.  The plan was to give the bell a mighty ring to flaunt the Frigateers and watch in merriment as they rushed out to confront whoever dared ring their bell, only to find no one in sight.  Once they went back in we would ring the bell again causing further flaunting and more merriment.  Heck, we were eventually going to ring the thing while they were standing there.  If they discovered the floss and started tracing it back we could just drop it out the screen and be home free.  Such a great plan! 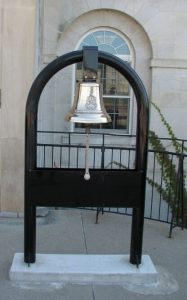 Reality, of course, was something else.  Engineering studies were still in our futures at that point but I do recall a Strength of Materials course that should have told us that the floss would stretch under tension – and it did.   Pulling on our end translated to nothing happening on the other.  All we could get was a little movement on the clapper from successive rhythmic pulls.  Eventually, my door was opened and someone was going up and down the hall trying like hell to induce something at the other end.

Time for Plan B.  Two brave souls (memory escapes me here but perhaps Tom Lawson and Bob North again) would pull the floss and ring the bell from a much closer but still protected area.  I think they hid themselves near the bleachers in front of the Old Hospital.  They rang the bell a few times and then bugged out for the safety of LaSalle before anyone came out of the Frigate to investigate.

The caper had the elements of a great skylark– enhancing class and squadron spirit and dark-of-night skulking about the campus– but faulty execution.  Like a small-party task on BOTC the jury-rigged raft didn’t have to actually float or the injured parachutist didn’t actually have to be gotten out of the tree; it was all about the journey, not necessarily the destination.

Nevertheless, it was fun at the time and a story I have shared with my kids.  I would ask that the others involved please forgive me if I have changed or rearranged some of the details and this doesn’t match your recollections.  Forty-three years of intervening adventures and memories have no doubt clouded my recollection.