I have been told in the past few weeks that I have an incredible memory for past details and events so I thought I might want to write some of them down so I don’t forget them and to also share some memories of that little slice of military heaven we used to have on the left coast. Based on a photo that someone posted of Mackenzie Flight at Royal Roads I was reminded of a little bit of fun we used to have on Monday nights called Uncle Claymore. Why Mondays you ask? Because that was the day the laundry came in.

Now to put it in context I started at Roads and finished at RMC. While at Roads I sent my clothes to laundry every week, but at RMC hardly ever. Part of the reason was that it was much easier to send your clothes to the laundry at Roads than it was to do your own laundry. It didn’t hurt that it was a very inexpensive service as well.

At Roads the laundry rooms were in Grant block and we all lived in Nixon block.  As a first year cadet it would be a pain to have to have to get dressed in a proper uniform and then double across the circle with your laundry and then wait around in the laundry room for it to be done. On the other hand, at RMC as I recall, laundry rooms were in all the Squadron areas, convenient and close. You didn’t have to get dressed up or go across the square. You could start a load and go back to your room or the common room do other things. However as I do recall to drop your laundry off at RMC to have it done by the laundry company, you did have to go to another building. It was in QM stores I believe, which was across the square for most of us.

At Roads it was much more simple. There was a large wheeled laundry hamper that sat next to the bottom of the stairs as you descended into QM lobby. You would pass it heading out the door to go to the dining hall and classes in Grant block. You would fill out your laundry chit, put it in the bag, and on the way out on Monday morning just toss it over the stair rail into the laundry basket. Sometime while we were at class the laundry fairies would visit Nixon block and pick up all the personal laundry. 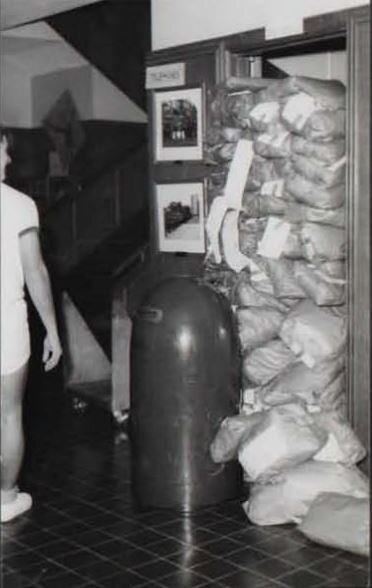 You can see the laundry packages here, as well as the wheeled containor used to receive the dirty laundry off to one side.

Not only did they pick it up, but they returned, in brown paper wrapped bundles, last week’s now clean laundry. Everything folded nicely, your shirts in plastic bags inside the bundle. (remember the plastic bags, they become important.) They then put the packages on shelves inside the cloak room off of QM lobby in sort of alphabetical order for you to pick up after class or after dinner.

For me it was a neat deke, and in those days I was all about the dekes. You bought enough shirts, socks, underwear, and PT gear to last two weeks. Then you would wear one week’s kit while the second week’s stuff was in the laundry. You then swapped them every Monday. No doubling across the circle to do your laundry. No wasting time in the basement of Grant block waiting for a load of laundry to finish. So very convenient.

Of course nothing was ever that simple at Roads when the inventive (or was it sadistic) nature of your fellow cadets came in to play. On Monday’s the unwritten rule was that you had until 19:00hrs to pick up your laundry. You could pick it up on the way back from class, after dinner whenever. But when the clock struck 19:00 anything left on the shelf in the cloak room became fair game. And there were enough people who would circle the cloak room like vultures waiting to be given the opportunity to play the role of Uncle Claymore.

Uncle Claymore rules were simple. As I said If you were forgetful enough to leave your laundry, unclaimed,  in the cloak room past 19:00 hrs it became fair game and anybody who found it, (generally someone from your own flight) could claim the laundry. It would then be smuggled up to the flight halls waiting for the magic hour of 22:00 hrs when Study hours were over.

By the end of study hours the claimer usually had informed the CFL of the claim and turned the laundry over to him, as he was about to become the Master of Ceremonies. The lights would go up at the end of study hours and we would start coming out of our cabins and being noisy. Then the CFL would generally make it known that certain individuals had had their laundry claimed. He would yell out the names and that person had to grudgingly get ready.

The cabins at Roads all had two windows opposite the door and the victim had to open those windows fully, and then position and sit in their CF Issue pleather and wood armchair in the center of these windows.  The victim then had to sit in the chair, immovable, on his hands waiting for what comes next.

The claimer would pick an assistant who then tee’d up the laundry at the door like Lucy tee’d up Charlie Brown’s football in anticipation of kicking a field goal.

Once everyone was in place including other members of the flight all gathered around in anticipation and glee, the claimer would knock on the cabin door. The victim had to reply “Who is it?” generally in a sing-song voice. 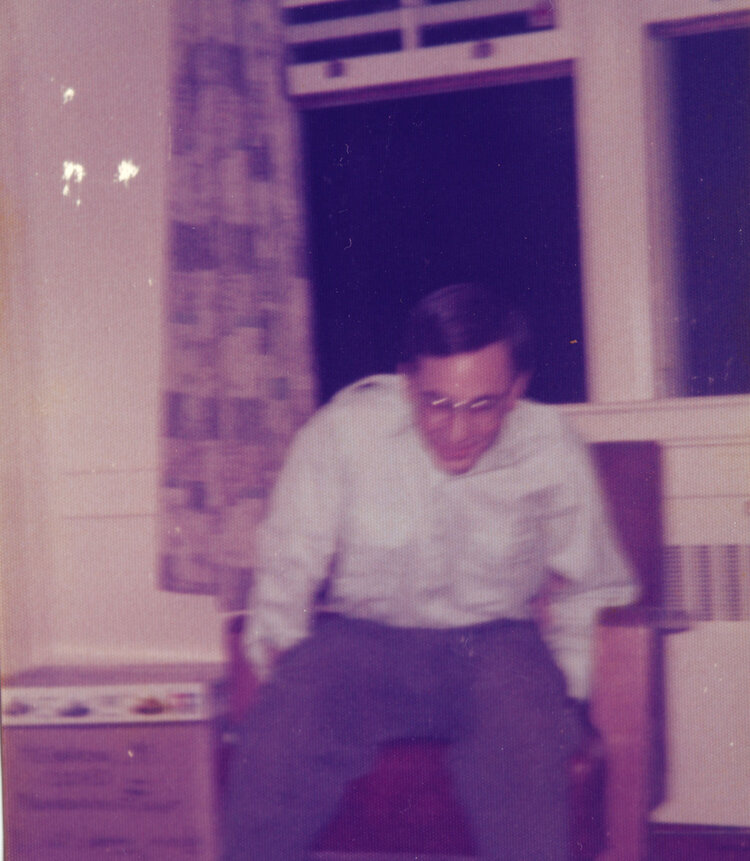 The claimer would then reply, “Hi Junior Cadet Bloggins, its me Uncle Claymore! Can I come in?”

The victim only had one response, “Sure Uncle Claymore, come on in!”

At which point the claimer would deliver a place kick to the laundry bundle in the attempt to get it out the open windows. The victim could not move and had to remain sitting on his hands until the kicker made contact with the laundry bundle.

There were several techniques to improve getting some laundry out of the window. Some kept the bundle intact in hopes that the victim was too slow or was deked out and the whole bundle went out the other window. Or maybe the force of the kick would split the bundle and like a shotgun, different pieces of laundry would be going in different directions. This made it harder to catch and invariably at least something went out the window. Sometimes this process was helped by the assistant just slightly ripping the brown paper wrapper before teeing the package up.

Now you would think that getting the laundry out the window would be enough, but no, we had to pile on. Once all of Uncle Claymore’s visits were finished, the victims would have to go retrieve their laundry. Remember me mentioning the plastic bags your shirts came back in? Well they made perfect water bombs, so as the victims were getting dressed to go outside to retrieve their laundry many others were filling up their water bombs.

As the poor victims were retrieving their laundry they were having to dodge water bombs. If they were unlucky enough to have had their laundry go out into the area we called Senior Stadium they could be bombed by cadets from six flights looking for targets of opportunities.

Who needed Monday Night Football when you had Uncle Claymore?