With thanks to M0137 Larry Richardson and the Class of ’79

As you may be aware the UTPMs at RMC had an inter-sectional hockey team entered for our year of graduation, 1979. That year we had a better record than the “Montreal Canadiens”, they lost 17 games, the UTPMs lost 16 games! Unfortunately, the UTPMs only played 16 games that year. Our record: 0 wins, 16 lost. We came close to tying one game, however, the team we played against went crazy in the last three minutes and scored the winning goal. I couldn’t figure it out at the time because it was only an inter sectional game and what was the big deal. However, after the game I spoke to a member of the opposing team and he informed me that no team had lost to the UTPMs and they certainly didn’t want to be the first.”

NOW FOR THE REST OF THE STORY

“I would like to think that the UTPMs didn’t have a very good team and that was the reason we lost. However, we had some pretty good players, Don (Tricky) McLeod, Dan (Slap Shot) McCann, Bill (Tough Guy) Kaine and Randy (Nice a Boy) Rodgers to name a few. I now know the real reason. Our goalie was Mike (Eagle Eye) Guerard. The reason Mike played goal was he couldn’t skate so it seemed logical for us to stick him in goal. After the season was over he also informed us he was legally blind in one eye!”

[Editor’s Note:  Despite losing those 17 games, the Habs actually won the Stanley Cup that year!] 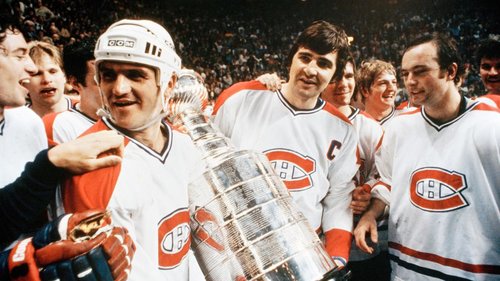 Side note from 12215 Dave Mowat: “On a side note to that story, Dr. Walter Avis, Pete’s father and first Dean of Canadian Forces Military College (CFMC – for the UTPMs), is the coach in the team picture and the mentor for the UTPMs. He was one of our honorary graduates for our Graduating Year and also has the UTPM Honour Shield Award (for the top UTPM) named after him – Pete is still presenting that award.”