The U. S. Army Infantry School

Armies negotiate life cycles and, depending on leadership, adopt and discard programs, practices and habits.  Over a 27 year long personal association with the U. S. Army by being on its rolls, depending on the unit or organization and the leadership, I witnessed variations in the approaches applied to soldier physical conditioning in general and particular, and when properly or not associated with unit mission.   I found physical conditioning among individuals and units to truly be an exercise in leadership.

Throughout my association with the Army, the service did maintain an Army wide annual or more frequent physical evaluation of the soldier that the soldier was required to pass unless medically excused.  And in the combat units there was generally a focus and emphasis on conditioning, though under certain leaders it could wane.  Administrative units such as headquarters and school units could, in my experience,  move into a lesser emphasis on conditioning mode if the leaders did not maintain an emphasis.

But for the most part into my third year of commissioned service and eighth year on the Army’s rolls, there developed an uptick in emphasis on physical conditioning across the Army as the Viet Nam War came to a close.   This trend, among other influences, seemed driven by the generation of brigadier and general officers coming on line at the time.  Many were combat veterans of the Korean War who had witnessed more than one tragedy due to soldiers whose physical conditioning did not meet the unforgiving test of battle as presented in the frequently merciless Korean environment. 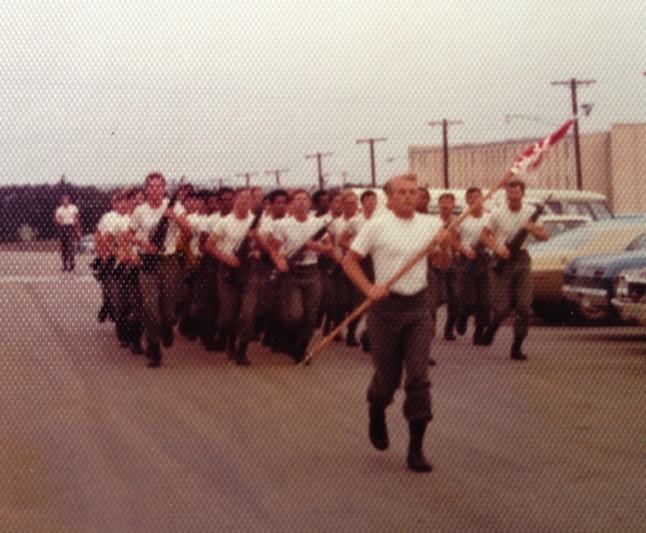 One signal event that underscored the steep price levied on soldiers not physically tough enough for the worst situations was a U. S. Army watershed event in the opening phase of the Korean War—it was the story of Task Force Smith.  The circumstances surrounding Task Force Smith and the resulting heavy losses and impact on the young officers in service at the time, was a major factor in the Army’s  increasing emphasis on conditioning as these officers assumed their roles at the brigadier and major general level and higher.

One of these officers was assigned as commandant of the Infantry School and Center at Ft. Benning, Georgia when I was assigned to the single maneuver brigade garrisoning the post.  This officer had been a lieutenant in Task Force Smith.  He never forgot what he experienced and vowed that throughout his remaining Army career, he would do everything in his power to prevent a situation from again occurring that found U. S. soldiers not conditioned to face the worst that combat can present.

Shortly after the new commandant assumed his duties at Ft. Benning, all units on the installation received guidance that by a certain date formation runs a minimum of three times a week would be at five miles.  Units were allowed a period of time to bring their individual soldiers by degrees to the target distance and then as formations.  The units would build to the distance than sustain the distance in the three weekly formation runs.

The commandant was in command of a U. S. Army Training and Doctrine Command school, the U. S. Army Infantry School, and the training center and three school and training brigade formations that operated under the auspices of the school and training center.  The center also included developmental organizations such as the U. S. Army Infantry Board.  Additionally, a U. S. Army Forces Command separate mechanized infantry brigade, a combat engineer group and several other separate units were assigned to the post.

Some units and activities on the post were conducting demanding physical training programs already based on mission.  Some were not.  Most were not regularly conducting formation runs to a distance of five miles per run, three or more days a week, with the exception of the Ranger School units.   The new commandant’s guidance in many quarters where aggressive physical conditioning was not the order of the day was not well received.  In various ways these elements made their dissatisfaction known.

But the new commandant was a force of nature.  In addition to the heightened troop programs he launched competitive programs between commands and units, individual competitive and recreational running events like 5 kilometer runs, 10 kilometer runs and marathon events.  It seemed the new commander was intent on turning over every rock to bring the culture on the post to one that lived and breathed conditioning, especially by running, to the highest level possible.  He was passionate in his pursuit.  A further aspect of the program involved conditioning marches of 5, 10, 15 and 20 miles conducted by the units. 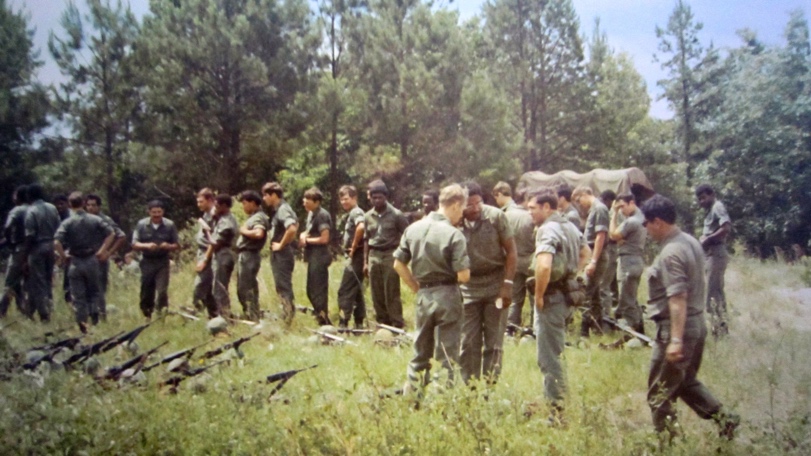 A mechanized infantry company breaks for its noon meal while conducting a 20 mile road march.

Still, there were pockets of resistance.  But the general was also prepared in his style to explain why he was so passionate in what he was doing. In the case of the mechanized brigade I witnessed the epiphany.  It came at a brigade officer’s Christmas military ball at the officer’s club, a gathering of some 220 brigade officers who with their spouses or dates comprised a gathering of perhaps 430 or more people.  The guest speaker was the commandant.

When it came time to speak, the commandant delivered a proper season greeting and comment but than related it as a “bring your soldiers home to their families” context connecting it to his personal experience as a lieutenant with Task Force Smith in the early part of the Korean War.  The commandant was not a particularly gifted speaker but he was a sincere and direct speaker.  What he said came from deeply held conviction.  And it became apparent to all present that he felt as deeply about what he shared.

His shared experience was as follows.  He said that Task Force Smith had been cobbled together in Japan in a desperate attempt to form a sufficient force to rapidly deploy to the Korean Peninsula and at least slow or blunt North Korean momentum and buy time–long enough for more substantial forces to be deployed.  Soldiers were pulled from everywhere in U. S. Army Japan to fill out the force, many without the needed training and conditioning.  It was a come as you are party for many if not most.

The task force deployed and made contact soon after arriving.  It began a fighting withdrawal.  The commandant’s company was withdrawing under pressure.  They had been engaged for several days and all were deeply fatigued.  Soldiers had become so exhausted that some began to sit down on the ground and quit.  The commandant said that every leader’s job began to focus on talking their soldiers into continuing to withdraw, even dragging them to their feet and prodding them along.  But some soldiers could not be motivated by any means and the proximity of the enemy did not allow remaining in place.

The commandant then said that a counterattack back over the same ground later found the exhausted soldiers.  The image had never left the commandant.  The soldiers had been horrifically mutilated and tortured to death by the North Koreans.

The commandant said that he had vowed from that day forward that no soldier under his authority would ever be so poorly conditioned that he would quit. As commandant he would in memory of these soldiers do all in his power to bring the physical conditioning of the commands he was responsible for to the highest level possible.

The comments, bluntly and forthrightly delivered in a mixed company setting left a hushed silence, especially for the type event.  But the sincerity and from the soul depth of feeling resonated.  The officers of the brigade understood clearly the commandant’s commitment.   For most it became their own.

The separate mechanized brigade fully embraced the commandant’s run and conditioning policy.  The commandant being a leader by example, on more than one occasion he appeared at the brigade’s cantonment, a distance from the main post headquarters, running with different units setting a leader’s example.

Changing a culture, especially in a disparate organization, is a leader’s true challenge of skill and ability.  This is particularly the case if the cultural change involves activity that may not be popular or readily embraced by many in the organization.  In this case the leader announced the changes, explained the purpose and went further.  The leader gave a fundamental reason for the conditioning run policy.  As well, he ran right along with the soldiers.   The negativity died out and the conditioning runs became a regular part of the duty week in garrison.  The conditioning of the troops of the command improved noticeably.

Before the above experience, then, and later, as an infantry officer I came to fully appreciate building and sustaining the physical toughness of any unit to meet any mission, especially if it meant weeks in deployed situation and moving by foot.  Broken terrain made particular demands on troops’ conditioning levels.  But I also spent a considerable time in mounted units.  It was my experience that mounted units, especially mechanized infantry, that did not emphasize physical conditioning to a reasonable level usually performed less well than those that did.

As well, even non-infantry units have found themselves in an active theater in situations that transition them from their own corps or service to operating as infantry. Any soldier in such a unit unable to confront the physical and other demands that develop, rapidly becomes a liability to the unit’s ability to sustain itself and perform its mission.

In retrospect, the commandant was a leader that sticks out in my mind.  He had the courage and tenacity to set a tough standard, tell his soldiers why he was doing so and then led the command to meeting the standard.  It was an impressive exercise in leadership to observe and participate in.