Above: Arms of the 69th Armored Regiment

The Detachment Officer-in-Charge who led well

The Canadian army, and any army really, conducts a wide range of missions and tasks in peace and war where subordinate leaders are dispatched to other formations or commands as leaders of detachments operating for short or longer periods under a different leader construct.  As well, leaders operate in commands that must accept detachments developing effective mission leader arrangements that work.  This “yin yang” experience can be expected by leaders in any army over a long period of service.

Of these experiences, one stands out.  It concerned a detachment of tanks of the 2nd Battalion, 69th Armored Regiment placed under the operational control of a mechanized infantry company.  The leadership of the detachment’s officer-in-charge and his subordinate non-commissioned officers proved crucial to the success of the larger high-visibility mission.  The exceptional leadership of the detachment’s leaders brought great credit on their parent unit, the 2nd Battalion, 69th Armor.

The separate brigade had been well over a year into its program of reorganizing into a separate mechanized infantry brigade initially as the XVIIIth Airborne Corps’ heavy force contingency package and eventually as the third brigade of the 24th Mechanized Division that would assume that mission.  Though the reorganization and training program for this mission were demanding and extensive, the brigade, due to the garrison location it was assigned, also found itself supporting major Army modernization work that was gaining momentum across the Army.  In many cases the brigade, with its Army National Guard support mission of a sister brigade in Tennessee, was supporting three major simultaneous missions that kept many of its units in constant operational mode.

One assignment for the brigade’s one currently organized mechanized infantry battalion (a second brigade battalion was on schedule to reorganize from an infantry battalion to a mechanized battalion) was to support the six month Developmental Tests/Operational Tests 1 and 2 for the pro-type Mechanized Infantry Combat Vehicle (MICV).  A sufficient number of pro-type test vehicles had been manufactured by the selected vendor to equip designated platoon elements of the battalion’s Company B.  Other platoon elements would operate with their M-113 Armored Personnel carriers as “control” units for operational performance data collection and comparison purposes.

The battalion’s Company A would, for test purposes, accept operational control of an armored detachment of three tank sections, seven tanks, from the brigade’s armored battalion.  For tactical purposes of the scheduled test battle engagement scenarios, the unit would reorganize and train as a Soviet motorized rifle battalion (MRB).  The reorganized company was over strength and would form a fourth provisional platoon in addition to assuming operational control of the tank detachment (some 240-250 troops under command during peak operations…a small battalion). 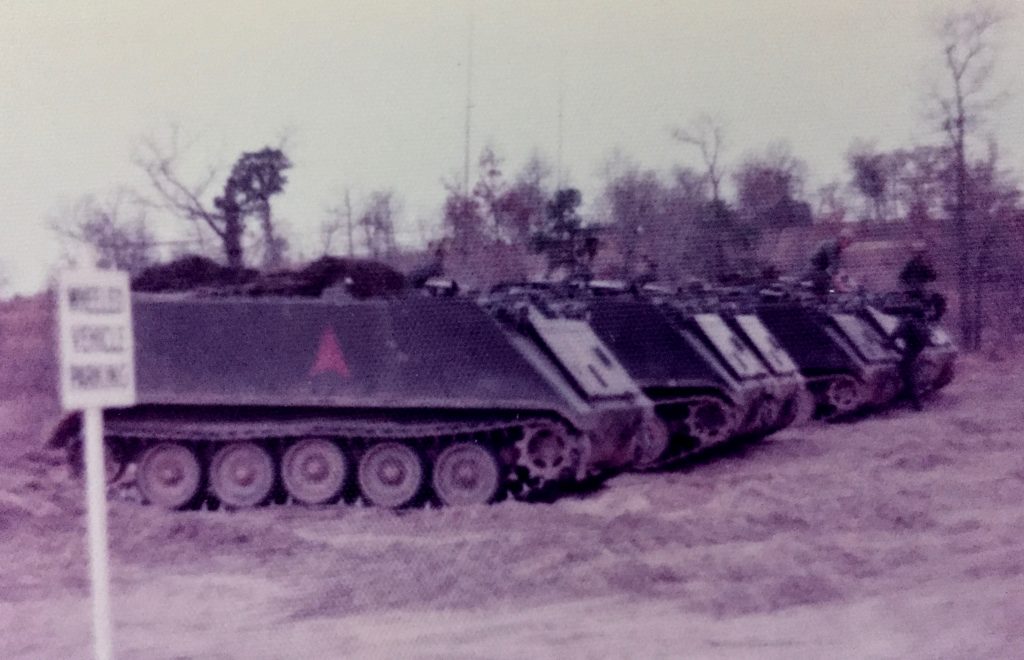 Vehicles of the MRB in administrative laager in the Ft. Benning maneuver area, note the “red device” painted on the side of the vehicle.

In addition to the training and validation program, a parallel training program of what would be the MRB’s opposing force, the “U.S. mechanized company” with its “control” M-113 platoons and its MICV platoons, was conducted. The training included introduction and use of a new opposing force system and technology.  The test plan would use the emerging Multiple Integrated Laser Engagement System (MILES), a powerful force on force battle engagement training system.

Vehicles of the opposing U.S. and Soviet test ground forces were outfitted with a sensor harness and a rear vehicle deck corner raised pylon of several feet, the pylon supporting a small platform at the top with a whoopee light and a smoke grenade fixture.  The vehicles’ weapons system was equipped with a laser device.  The device’s laser signal was calibrated to replicate in the test’s mainframe computer the type weapon’s lethal or otherwise effect when registered by a sensor in the area of the vehicle the opposing vehicle had engaged.  If the sensor on the rear of the opposing vehicle received a signal indicating a tank main gun hit, an immediate catastrophic hit registered in the system.

The entire system was interactively connected such that on a test battlefield, the vehicle crews and other weapons systems would engage each other in the attack/defend scenarios required by the test.  As the vehicles engaged, receiving pylons ringing the battlefield registered the signals of engagement results, these being plotted on a digital battlefield map that included all data of who engaged whom vehicle wise, where from, type weapon and effect, ranges and other necessary data.  The system, beyond any vehicle crew influence, killed any vehicle shown to have received a catastrophic hit by immediately activating the whoopee light on top of the pylon mounted on the rear of the vehicle and popping the installed smoke grenade, effectively killing the vehicle visually on the battlefield.

The combined training on all systems and organization proceeded for several weeks until test staff determined units were ready to initiate the test scenarios.  The units were expected to maintain a 100% vehicle availability throughout the coming months of test, a not inconsequential expectation for the participating mechanized infantry companies that had recently returned from a month of operating in the New Mexico Desert at McGregor Range for maneuver and gunnery training.

This very high required vehicle availability rate would also be a particular challenge for the tank detachment given where the M-60A3 Tanks were on their service and rebuild schedules.  All combat vehicles were experiencing some parts replacement issues.  The issues were a result of the effects on the supply chain that had developed on post at the time.  These effects were due to the recent Israeli war and its impact on priorities that affected parts supply chain availability and the constrained defense budgets in effect at the time.

All unit training and validation successfully completed and on time.  The test program initiated to successful completion of the battalion’s mission in support.  Ultimately, the foundation laid by the tests with additional later testing and procurement decision resulted in the acquisition of what is now the various editions of the M-3 Bradley Infantry Fighting Vehicle Fleet of the U.S. Army.

But from a detachment leadership perspective, it is critical to take a closer look at the tank detachment’s performance and that of the detachment leadership.  The tank battalion had assigned a base platoon to support the test with its two tank sections and their combined five assigned tanks.  A third tank section of two tanks was placed under the formed detachment’s operational control.  A force approaching half of a tank company resulted, enough tanks to allow a typical MRB footprint to be replicated in the attack.

The tank platoon leader was not located at the barracks occupied by the mechanized battalion but at a separate battalion barracks some miles away.  The detachment’s movements, rendezvous with the MRB, extended deployments, tactical leadership and other leadership of the detachment that was necessary, as well as all logistics and coordination of recovery of any down tanks and replacement of tanks requiring service or other maintenance, rested squarely and heavily on the tank detachment OIC’s shoulders.  In the “other leadership” category, this officer and his sergeants had the challenge of maintaining morale of the tank crews through a grueling schedule.

In the event, the tanks detachment met and exceeded the mission.  They were always ready and on time and there were challenges.  The section was critical to constructing the data footprint scenario after battle scenario that built the argument to acquire the MICV and effect a huge upgrade in the mechanized infantry’s ability to fight with tanks.  This enhanced ability would be essential as the Army also was conducting in parallel the development of what would become the huge leap forward of the M-1 Abrams Tank. The M-113 was already challenged in operating effectively with the M-60A3 tank and would simply be entirely obsolescent on arrival of the M-1 Tank.

The tankers of the detachment from the 69th Armor and their leaders were critical to success of the test work.  They were professional, responsive and dedicated to the mission; they completely integrated into the MRB team that formed even for difficult excursions beyond the scheduled scenarios.

A note, the validation contribution of the test’s use of the emerging MILES further cemented that system’s developing use. Ultimately, it became a powerful combat training multiplier and primary system supporting the National Training Center at Ft. Irwin, California and similar centers at Ft, Polk, Louisiana and Hohenfels, Germany and elsewhere across the Army. 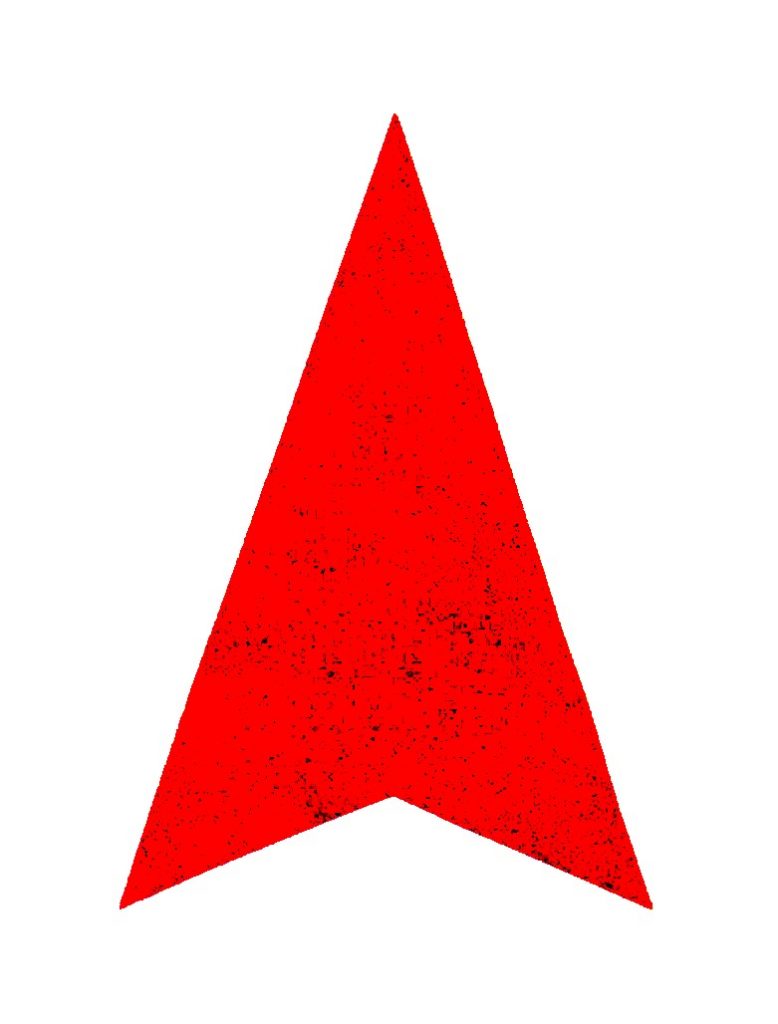