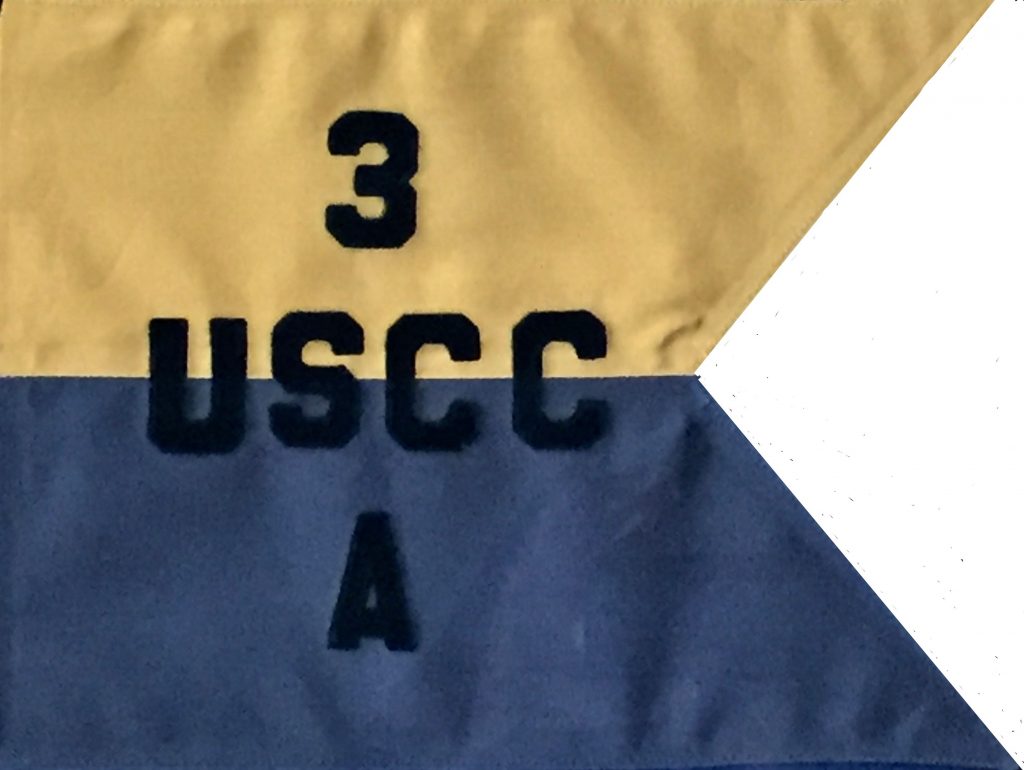 Guidon of Company A, 1st Battalion, 3rd Regiment, U. S. Corps of Cadets

Organizations with high rates of leadership and personnel turnover are often challenged with developing effective leader handoff mechanisms that optimize continuity of best practices in the organizations and sustainment of operating effectiveness.  Loss of vital and necessary institutional knowledge is one of the critical casualties of ineffective organizational systems and cultures.  As critical to sustaining a mission capable leadership under conditions of dynamic staff turnover is individual and collective ability of all staff to compensate for leadership voids as they occur…and some voids may develop not just from a vacancy developing but from less than capable incumbents.

In the civilian workplace, both in private and public sector, for many valid reasons, the challenge to effective leadership continuity is exacerbated by often minimum to no redundancy in most leadership positions and staff positions.  As well, the culture does not tend to support a concept of every employee knowing the job of the person they report to sufficient to assume the superior’s role.  In fact, most civilian supervisors might feel threatened by a subordinate knowing their knowledge, skills and abilities (KSA) set  sufficiently to assume their role or position, no matter how critical the position is to the mission, if  the incumbent had to vacate the position for an extended period of time due say to an injury.  Many in the civilian work place view control over KSA’s as job security.

Clearly, in an organizational environment where an extremis turnover mode is a potential and even in the most stable mode an assured 25%-33% personnel turnover may be anticipated annually for leaders and subordinate employees, survival may mean an effective leader turnover system.  The luxury of not preparing for the worst is non-existent.  Organizations that fail to develop effective leader continuity capabilities will very likely perform poorly or fail, even in the most stable personnel environments.

One of these systems that is critical is the individual career development system against “go to war” mobilization and force expansion needs that use the entire Army personnel/officer inventory as a developing cadre for such expansion where all individuals are being developed to assume a range of higher roles in the force.  As well, with the Army’s intake of new personnel, all are on engagement of 4 or 5 years to be renewed if the individual elects to do so and has progressed well enough to meet retention standards.

In such a construct, in leader roles, particularly to assure continuity and mission capability, a culture, supported by leader training and development systems, of optimizing subordinate ability as seamlessly as possible to assume the next up role is of critical importance.  Such ability to “fall in” almost immediately on a superior’s role has proven again and again vital to sustaining organizational mission effectiveness as relatively large annual personnel turnover at all levels occurs.  Additionally, given that a major portion of the organizational inventory of the Army is oriented on operations that if activated may remove many personnel suddenly due to death or trauma, the necessity of subordinates being able to assume the role of the next senior person immediately is not a “nice to do” but a capability that may determine staying alive.

In keeping with the above real world leadership redundancy imperative the Army’s several officer pre-commissioning systems of the U. S. Military Academy (USMA), Reserve Officer Training Corps (ROTC), Officer Candidate Schools (OCS) and direct commissioning address the mechanism of “followers” or subordinates being prepared to assume the next up or leader roles.  All programs address the function though perhaps least in the direct commission from the professions route, i.e., medical doctors or attorneys, though non-commissioned officers directly commissioned may be well versed with the duties and concepts applicable through their prior service.

Perhaps the most sustained and acculturated group to adhering to the concept of subordinates prepared to assume the next up role are the military academy graduates.   The cadet corps of some 4,000 Active Army cadets, a rank in the Army, are organized into a brigade.  The brigade at the time this discussion focuses on was composed of four regiments, each regiment of three battalions, each battalion of three companies, each company having three platoons and each platoon three squads.

In the case of Company A, 1st Battalion, 3rd Regiment, United States Corps of Cadets, as with the other 35 companies then organized, the company had a company commander, three platoon leaders and three squad leaders.  There were supporting positions of leadership such as the first sergeant, training non-commissioned officer, and platoon sergeant.  These chain of command appointments ran the military affairs and operations of the company separate from the academic function of the institution.  These were real functions, training and operationally, and in terms of discipline.  Performance of incumbents affected their evaluation and standing in merit which affected later opportunities and selections. 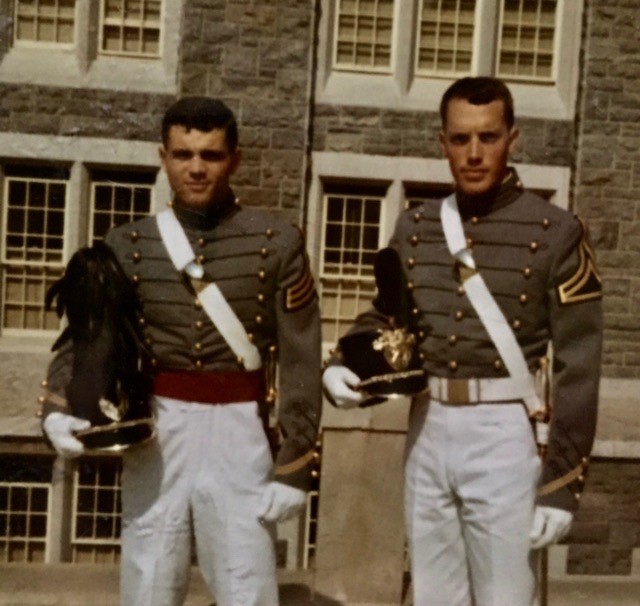 To create a built in leader change dynamic, the slate of leaders would change out every three months (a detail)  over the academic year.  This meant that cadets not in a leader position during an earlier detail lived under the possibility that in the following detail they might be the leader.  This engendered good followership, a critical component of any successful leader’s development, as well as some awareness to pay attention in the event  the followers found themselves vaulted into a leader position during the following detail.

During the three months of the summer, the companies went inactive as the cadets took a months leave or deployed on the targeted two months of Army tactical and operational training or training of new cadets during four of the summers the cadet was a member of the Brigade.  This deactivation and reforming of the company added to the environment of being comfortable with such organizational dynamics.

In the case of a Company A, 3rd Regiment member, over a four year span, the member would experience a change of organizational leadership 12 times,  a forming of the company four times and an administrative disbanding of the company three times.  The individual training in leadership was engaged in an actual organizational laboratory where the realities of significant organizational dynamics were almost routine and expected and built in.  This circumstance created in the cadet an almost second nature sense of such realities and how to manage them, at least understand that leadership can change, function and continue and that subordinates must be prepared to assume next up roles.   This dynamic was further affected by cadet attrition resulting from resignations, separations, and accidental death, all of which would be realities in following experience in Army units.

The systems at work in Company A also operated, though to a less pronounced degree, in most ROTC units and the OCS program.  Direct commission programs are least able to take advantage of this device for leader development with exception of those commissioned from the ranks having experience from their troop units.  Non-Commissioned Officer programs also apply the device during the relatively short duration of these NCO courses.

Another format that applies the device aggressively is the U. S. Army Ranger School.  Though only a 9 week program it uses the “follower being prepared to assume the leader’s role mechanism” in a most profound way.  A Ranger who was in the most subordinate role in a 40-50 Ranger platoon size patrol, may on a wind swept 3,500 foot ridge at 20 degrees Fahrenheit in total blackness at 0200 hours suddenly be made leader of the platoon.  This is a most sobering wake up call on the necessity of thinking through continuity of leadership where failure to do so has dire consequences.

On a personal level I have applied this system to degrees in line Army organizations from combat platoon (35-45 personnel), to detachment (49-69 personnel), to combat mechanized infantry company (187-220 personnel),  to battalion (750-800) personnel, and staff sections at battalion, brigade, division and Army staff.  Where possible, given the constraints imposed by the personnel system, I have applied it in civilian organizations like a state park region of 230 staff, a capital outlay design and construction office of 49 staff with some $95M+ in capital projects and a Department of Labor and Industry Region of some 28-29 staff covering 34 counties and municipalities. 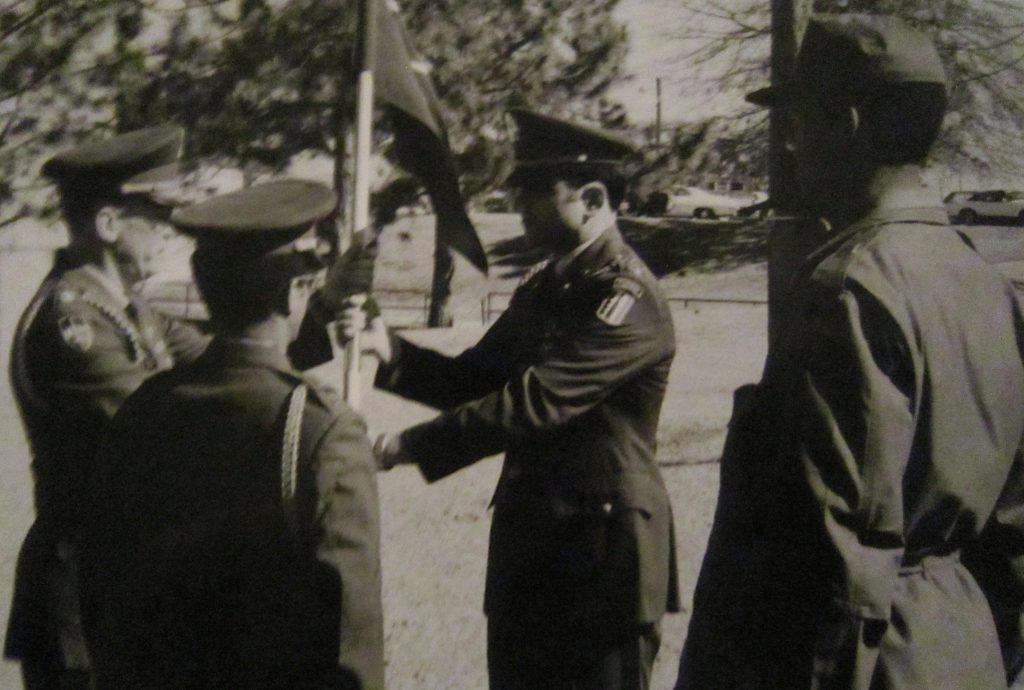 The author at the change of command for Company A, 1st Battalion (Mechanized), 58th Infantry Regiment at Ft. Benning, Georgia in 1976

Where the mechanism of the subordinate preparing to assume the superiors role is effectively at work, the subordinate developing a good sense of the necessary KSAs, even obtaining some practice where a superior is on leave, organizational continuity against unprogrammed dynamics of resignations, promotions to positions elsewhere in the organization, fatalities or debilitating illness is assured and usually does very well.  In fact the organizational culture is one of “preparedness” to carry on.

A conclusion drawn from much observation and experience is that the continuity mechanism discussed above should be built into any organization as much as possible.  Subordinates should be developed in such way that they can assume the next up role even unexpectedly.  In some case failure to integrate this approach may mean the death of the organization.  The establishment and maintenance of effective systems to hand off leadership should be a priority in every organization.

As well, schools and training programs advertising or established to develop leaders should incorporate a practical, functioning system of leader continuity experience.  The system should be a functional laboratory of practice that engenders in the leader an instinctive sense of being prepared to accept the next superior role, training subordinate leaders to do the same and a healthy sense of being able to reorganize and reform the organization and establish effective leadership quickly when doing so.