As was the family’s custom–members of the Wilson, Connecticut family had gathered around the dining table in the family’s formal dining area off the kitchen of the family’s large renovated farm house.  They had finished a delicious Sunday dinner of traditional family soup, roast pork, mashed potatoes, green beans, sweet potatoes and apple pie.

World War II had been over for almost nine years and hostilities on the Korean Peninsula were at an end thanks to the armistice.  Except for the one active duty Army officer at the gathering, all of the men were World War II veterans who had reentered the civilian economy with good employment.  Some family were absent, three of these overseas in military service in Germany and Japan.  One sister who had recently completed an enlistment in the U.S. Navy was a student at Florida State University.

The house was now sited on a Matianuck Avenue address.  It had recently at the time been moved less than a mile distant from its original Olga Avenue site to make way for U. S. Interstate Highway 91.  The Olga Avenue site had been adjacent to Keney Park and Soldiers Field Cemetery.  The latter had figured in the experience of the family’s seven brothers as they grew up in the house at the Olga Avenue location.

Being a Sunday, the large family had gathered after Mass for dinner.  It was a family of patriarch and matriarch and seven sons and five daughters and their spouses and children—25 grandchildren would eventually extend the family.  Another daughter, her husband and two children were not present.  Her husband, operating his various enterprises in Florida and a noted editorialist and speech writer for the Florida Governor was a disabled pre-World War II Army veteran.

Nevertheless, even with the family members that were absent, it was a large group of people that gathered.  The matriarch and patriarch, three of the sisters and their husbands and four of the brothers and their spouses were a gathering of 15 adults. The seventeen grandchildren kept the gathering lively and brought the family present to a festive 32 people.

The seven brothers and their five brothers-in-law being veterans or serving soldiers or airmen always flavored the conversation of such family gatherings.  Of the seven visiting the house that Sunday, all were World War II veterans.  One was a Navy veteran, five were Army veterans and the last was a serving Army officer in transit to his next assignment at Fort Knox, Kentucky.

As was the custom after dinner, the grandchildren spread out for play, looking through books in the library, sorting through the coin collection, playing the piano in the parlor or taking advantage of the large grassy yard and back garden to play yard games. The adults tended to gather around the dinner table for discussion about family, current events, recent developments at work, travel, news of family not present and even nine years later, the war that most had fought and served in though by this time the Korean War had been fought as well, and one family member not present had fought in the latter war in North Korea.

At one point later in the day when only three men remained around the dinner table, the shorter of the three, a man who often spoke louder than seemed necessary and often asked to have a comment repeated, seemed to be far away as he was talking. 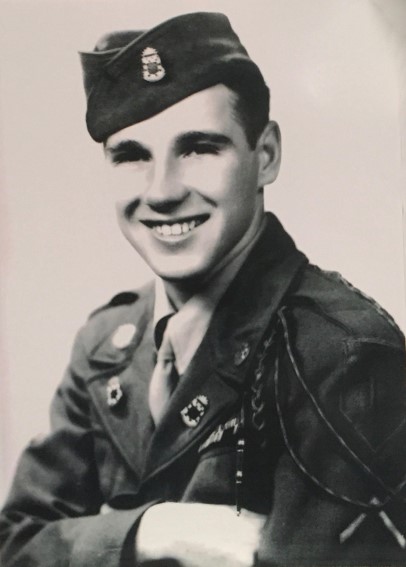 One of the grandchildren, a nine year old boy, always interested in the old stories had positioned himself near the table and was listening.  His uncle, his father’s next younger brother, second oldest of the seven brothers, the man speaking loudly, had served as an artilleryman in World War II.  He had served on a 105mm Howitzer gun crew.  His artillery battalion had fought from North Africa, to Sicily then to Normandy and across Germany.

The boy’s uncle had been a cannoneer with a battery of the 32nd Field Artillery Battalion of the 1st Infantry Division Artillery.  Whenever he reminisced about World War II the stories were always interesting.  The boy had picked up on the drift of the conversation changing and his uncles’ change of subject to the war.

Some of the stories were humorous and for general company, some risqué and some not for mixed company.   Many were about cheating death.  Life in a World War II infantry division direct support artillery battalion, especially one of the three direct support battalions of the 1st Infantry Division, was a dicey existence—the world of counter battery fire from opposing German artillery alone, was a constant threat to a cannoneer’s life.

This day, his uncle was remembering his gunner corporal.  This man had been his immediate leader for well over a year by the time the 1st Infantry Division had gone across the beach at Normandy.  The gun crew under his leadership had had many adventures in Africa, Sicily and then France.

The corporal had, according to my uncle, been a first rate leader.  A little older than the other soldiers of the gun crew, he took a great interest in every man.  He ensured all were properly equipped and trained.  He ensured rations were available.

On more than one occasion, the corporal made decisions that saved their lives.  It was clear that my uncle had great admiration and affection for this leader.  As my uncle told the story, the corporal was in his view the most able and skilled gunner in the four howitzer batteries.

But the story went to a place that clearly was a painful memory for my uncle.  While operating in France, the battery received heavy German counter battery fire.  The corporal, who had achieved almost God like presence among his men, someone who seemed indestructible to his gun crew, proved mortal after all—a shard struck his head in the counter battery fire killing him instantly.

That my uncle recalled this event 9 years later and would continue to do so throughout his life, suggested something of the impact of this leader on the members of his gun crew.  He was embedded in their memories as “their leader.”  The boy listening wondered at this revelation when the leader had obviously ceased to exist for many years.  Yet, had the leader really ceased to exist in a more telling way?

His uncle answered the question.  The Gunner Corporal had often had the crew rotate tasks to include that of gunner.  His idea had always been that if any man became a casualty, another member of the crew could back fill the task immediately.  That included his role as the gunner.

Through practice and role swapping, the crew had developed an instant ability to fill any vacated function and continue to operate.   And my uncle made a point…though all the surviving gun crew were stunned and devastated by their corporal’s death, they automatically continued to function through the counter battery fire and their own following fire missions—their corporal lived on in their actions.

But the poignant memory of this beloved leader, remembered by his uncle so many years later, always stayed in the boy’s mind.  It would inform the boy’s approach to leadership many years later as a soldier and officer himself.

In a sense, good leaders live forever.  Even after death they live on in their subordinates who will act as the leader inspired and trained them to act.