The infantry First Lieutenant platoon leader was temporarily in garrison.  His platoon had spent much of the preceding several months constantly in the field in support of a major post-Viet Nam Army initiative to examine how it should pivot the force toward a “plains of Central Europe” orientation.  The platoon was an element of the U.S ground force playing out scenario after scenario against other Ft. Hood units configured as Soviet ground force.  The Air Cavalry Combat Brigade Test I (ACCB I) was keeping the platoon, its soldiers, and its leader very busy and engaged.

During a lull in ACCB I operations, as was the custom in the Army, the lieutenant found himself with an extra duty.  The battalion to which the platoon belonged was a maneuver battalion of the 1st Cavalry Division then organized under an experimental modified table of organization as a tri-capability division with one brigade of armor, one of air assault and a third air cavalry brigade (attack helicopters).  The 1st Cavalry Division G-1 (personnel section at division) had a section that administered the division’s ongoing Army Regulation 15-6 boards to determine the unsuitability or unfitness status of certain soldiers relative to separation from the service.

The boards essentially conformed to a civil court proceeding in the Army’s due process system to ascertain the status of soldiers in the two categories mentioned and, if the status met the standards for separation, make such findings and recommendation by the president of the board to the command authority to separate the soldier from the Army. When the boards convened they consisted of a specified number of officers and non-commissioned officers (NCOs) detailed from across the division. The senior member was a field grade officer as president.  The boards usually comprised seven members.

The boards also included the subject soldier, his counsel, and a private attorney specializing in such actions or an assigned Judge Advocate Generals Corps (JAG) attorney.  The board was coordinated and managed and by the board “recorder” who essentially functioned as a “prosecutor” relative to separation.

The division G-1 had built the initial action file that included chain of command actions and communications relative to the board subject’s performance of duty and other relevant factors of fitness and suitability as defined in the affecting regulation for each category.  As well, evidence to the level that justified the board action relative to the stipulations in the regulations were also a part of the file.

Typically, the first task a “recorder,” once assigned, had to immediately perform was to identify all critical officers and NCOs in the soldier’s chain of command still in the command and any other persons with relevant testimony and then seek these individuals out across the command obtaining their sworn affidavits relative to the case before they left service or the command.  This latter function was very time sensitive as large numbers of officers and NCOs were leaving service as the Army began its reduction in strength as it withdrew from Viet Nam (either that or they were being reassigned elsewhere in the Army).  A single individual’s affidavit could have a critical effect on the proceedings.

A second priority task of the recorder was to immediately schedule the convening of the board.  This required early coordination with the assigned president  based on timeline guidelines provided in the case file package by the Division G-1 to set the convening date.  Once the date was set, the recorder’s third most important task was to coordinate as quickly as possible with the other members of the board and soldier counsel on the convening orders and confirm each member.  If a conflict developed with any member, coordination with G-1 had to immediately follow to obtain a replacement.

Task four for the recorder involved getting fully up to speed on the applicable regulations, the duties and powers of the recorder and to understand the protected rights of the soldier subject to the board and what was the possible conduct and function for the soldier’s counsel relative to the board proceedings.

Then the recorder began task five, a full review of the case file for sufficiency and to determine where more evidentiary material was necessary to prosecute the case.  For the most part, the G-1 provided well prepared files that met the standards stipulated in the regulations governing such board actions.  The recorder coordinated a location for the board to convene and ensured that all members and necessary materials were prepared on the scheduled day for the proceedings.

The recorder then, on the board president’s initiation of the board and its proceedings, conducted the government’s case through those proceedings.  The complexity and demands of these proceedings could be greatly increased by the conduct of the affected soldier’s counsel.

On completion of the board the recorder, who had also made a record of the proceedings, combined these with the board president’s report of findings and recommendations to the division commander for final disposition of the case.  This process kept the assigned recorder very busy, especially when these actions were viewed as an “extra” duty.  The thought does occur that a trained JAG attorney would have been the ideal officer  for the recorder function, but the Army of the day was short JAG officers.  Fortunately in this case, in addition to the instruction all officers received in the Basic Officer’s Course at their branch schools in the Uniform Code of Military Justice, the officer had also taken several law courses at the Military Academy prior to commissioning.  He did have some preparation.

Nevertheless, a single case was a huge challenge for a platoon leader engaged in a busy field schedule.  The administration alone for a mechanized platoon of over 40 assigned soldiers and four M-113 Armored Personnel carriers and the associated weapons and equipment to also contend with that was on constant deployment was a stretch.

As well, the cases on their human side had many facets that made the case more than just an administrative procedure.  Some soldiers clearly warranted the action while others had records that clearly deserved some consideration, brave soldiers who had served well but were now acting out the effects of what we now call PTSD.

Fortunately, the recorder duty was supposed to be a rotating duty.  The prospective recorders eligible for the duty were on a division duty roster.  Once their case completed, they went to the bottom of the roster.  Given the times and the shortness of tenure on post for prospective recorders before a reassignment overseas developed, typically a lieutenant might handle one or possibly two cases.

Then, the lieutenant found himself being assigned additional cases, ultimately handling sixteen cases, many from the same unit.  The lieutenant made his company commander aware but the cases kept coming.  The lieutenant under the circumstances had set up an administrative office and employed one of the staff sergeant squad leaders and a private who had administrative skill to form a proficient capability within the platoon to move the cases.

The proficiency and efficiency that developed did move the cases that were all prosecuted fairly and successfully.  A key tenet the lieutenant followed was to respect the dignity of every soldier that came before the board but to assure that if the record warranted, the soldier was in fact separated.  This happened in every case that justified such action.

On the other side of the coin a staff sergeant remanded to the board had had a stellar record.  Over a period of months his situation deteriorated, likely due to substance abuse that was a possible response to PTSD.  In this case the board determined that the soldier be separated but the condition of discharge protect the soldier based on his overall record.

The lieutenant was subsequently assigned to a duty that removed him from the roster and then assigned overseas.  But the poignancy of the boards and their process left a deep impression on what effects of the leadership environment soldiers negotiated could be, good or bad.  There was a cause and effect of leadership on individuals that for some led to the boards and separation from the Army.

The lieutenant also noted that the officers and NCOs that sat on the boards proved on the whole responsible in their performance of this duty.  There was respect for the individual soldier, even one not meeting the standard required.  That was an impressive statement of the quality of officers and NCOs then serving.  The boards proved very fair in their assessments and deliberations.

In retrospect, even though very challenging at the time, the lieutenant afterward came to appreciate the leadership value of the recorder experience.  He also gained a leg up on mastering Army processes.  He became very proficient in working an administrative action quickly, efficiently, professionally and successfully. 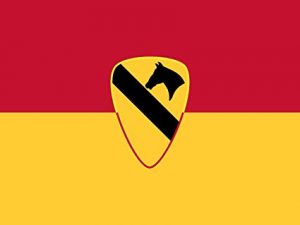 Colors of the 1st Cavalry Division